I’m not going to claim I’m a currency expert, but I think Channel 10 put the decimal point in the wrong place, as I’m pretty sure an Australian Dollar is worth more than US 8 cents. 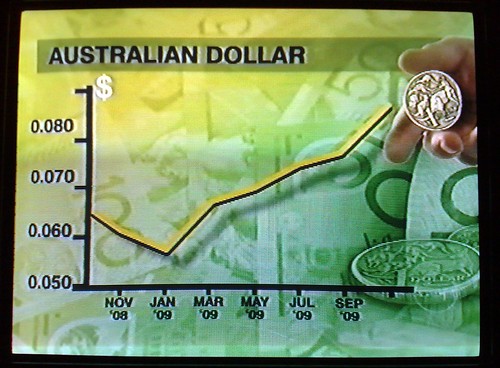 Gosh I would hope so! Things like this usually flash on the TV screen so fast that most people would not notice the error. You have a good eye for detail. That small decimal point makes a big difference!

According to Verizon, there’s no difference between 2c and 0.02c

Hell, the way KRudd’s throwing away money at the moment with the so-called “stimulus” package, it may very well get to that!! Then again, the way the Messiah (Obama) is throwing it away, it might very well be the other way around!! Has that stimulus worked yet? Do you see the many projects underway at the moment? Then again, if the economy has “rebounded”, as our Glorious Leader so claims, why then do we need more stimulus- it has done what is needed, right?
One would then think it was time to slow down unneccesary spending, before our national debt explodes, which by the way, was totally eliminated by Johannes Magnus (John the Great in Latin- John Howard!)! For all those people who thought they got “free” $900, it ain’t free, because your taxes WILL go up to pay for it- not in the next year, as the federal election will be coming up, but after that, along with interest rates!
I’m not at all against government spending, but if they’re gonna spend OUR money, then at least make it worthwhile, and not for re-doing schools which are gonna close in a year, or for election advertising (which is what those “Stimulus” billboards are, by the way)!
On a side note, I’ve taken advantage of the rise of the dollar against the greenback, having made quite a few purchases on Amazon as of late! Might as well get some value for my Buck!!

Many of the “Grand Projects” have been long overdue.

Perhaps it is “The Stimulus We Had To Have.”

Stimulus we had to have?
Granted to 2 classes’ of people, when it should have gone to 1.
The 2 being – a) The low income poor, who proceeded to throw their money at Asian made plasmas. and b) the middle income debt mummies and daddies, who saved and paid off debt.
It should have gone to the Rich, who didn’t need to buy a plasma, or pay down debt. Instead they would have probably spent the stiumlus on consumer discretionary’s supplied by companies managed by those from the b) class above, with the help of their workers from the a) class.
Jobs don’t buy votes though, do they?

Will, be sure to check out the original blog with this stuff. Amazing.

Andrew V “Do you see the many projects underway at the moment?” — Heaps. Go check out any school; most of them have some kind of building project underway.

No-one got the point of what I was trying to say! I never said that I was against government spending- I’m against FRIVOLOUS government spending! It may sound really wonderful that lots of schools are getting plentiful amounts of cash- who doesn’t want to help the kiddies!?!? Let me point out an example of frivolous spending in schools! My old primary school, St Elizabeth’s in Noble Park North, as Andrew S has notified me, has indeed decided to use the stimulus money- to build GLASS partitions between classrooms! Yes, you read correctly! Tell me, how can this be productive? Sure, there’ll be those who’ll say, “But doesn’t that stimulate the glass companies?” Maybe, but wouldn’t that money be better put to use, I don’t know, say, improving the quality of teaching, hiring more teachers, buying new text books, developing better teaching methods?? I have certainly seen examples, and have had to make up for teacher inadequacies with my cousins for lack of proper education on subjects such as maths and science! But alas, those things won’t be a monument to KRudd’s glory!!
I do think the government is capable of doing something beneficial for the country! How about this for size- a national water grid, the states with lots of water can pipe it to states with less!? Benefits everyone, right? Similarly, we should be boosting our energy supplies, with all forms of energy! And even though I’m not a PT user, I fully support a broad base funding of PT and road works- I completely agree our transport system needs to be upgraded!
If the government is going to do a “Stimulus” package, then let’s build something worthwhile with it, and not waste it on a broadband network we essentially have! What’s more important- water or faster downloads?
Priorities, people!!!

Andrew V (comment 3): Though it might seem counter-intuitive at first, the heavy borrowing by the government actually puts upward pressure on the Australian dollar. This is because investment is done in Australian dollars, so whether it’s a tourist spending money over here, somebody buying our exports, or a foreigner investing in local property/market/government bonds, demand for $A increases, and so the exchange rate goes up (this is not always a good thing, despite references to a “strong” dollar)

Of course, it’s not the only factor, which is why the US dollar is still down, despite being heavily propped up by China.

And Daniel – yes, many projects are underway – but they are not done efficiently. You could pay someone to dig holes and fill them in again, but this is hardly a productive use of resources. Even though this would (possibly) show up as an increase in GDP (which is an income measure), it comes at the expense of a greater decrease in wealth. This is certainly not a good thing.

“How about this for size- a national water grid, the states with lots of water can pipe it to states with less!? Benefits everyone, right? Similarly, we should be boosting our energy supplies, with all forms of energy! And even though I’m not a PT user, I fully support a broad base funding of PT and road works- I completely agree our transport system needs to be upgraded!
“If the government is going to do a “Stimulus” package, then let’s build something worthwhile with it, and not waste it on a broadband network we essentially have! What’s more important- water or faster downloads?
Priorities, people!!!”

NSW and Victoria, “the states with lots of water …” have recently been fighting tooth and nail to make sure that all the water from the Murray-Darling *never* reaches SA. The Fed had to step in to buy the water from them so it wouldn’t be used and would finally trickle into what’s left of Lake Alexandrina. And even then it couldn’t buy enough to do the job properly!

“… all forms of energy” ? How about that nasty, wicked, nuclear? We’ve got more Uranium in Oz than almost anyone else and we’re too gutless to use it!!! We just sell it to others so they can make bombs! Of course, no state would ever agree to be the trail-blazer so even if they wanted to, the Fed would never get a project going.

“… broad base funding of PT and road works …” would be fine, but again, the money would have to be given to the states since the Fed doesn’t build roads, railways or PT. Maybe they helped finance the Ghan extension to Darwin, I’m not sure about that. But that rail line is the exclusive domain of privately owned rail transport companies (company? – is GSR a monopoly?) so there’s no widespread benefit flowing from that spending! And once the money is in state coffers, who knows what infrastructure would ever be created with it. If any.

“… a broadband network we essentially have …” No, we don’t. While the provision of 3G and (what Telstra likes to call) 3.5G network services in Oz generally outstrips similar services in the US by a fair margin, I have read (no, I can’t quote sources, but I’m sure you could find them if you searched) that broadband services in some other countries in Asia and Europe are significantly faster than anything we currently have and that those other countries would not class our services as qualifying for the label “broadband”.

So, in essence, the Federal Government can’t trust the states to spend stimulus money on “big ticket” items the way they intend it to be spent. And they only have “jurisdiction” to spend it themselves in certain localised areas (military bases and the ACT?)

So why not give it to members of the public and hope that they will at least spend most of it domestically? So what if I but a Taiwanese TV? I’ll probably buy it from a shop in my suburb from a sales person whose salary will also be spent here and whose taxes will go back to the government, as will the taxes of the company employing them.

And to Andy I say giving the stimulus money to “the Rich” would *not* have the effect you expect. They would be much more likely to spend it on airline tickets with companies other than Qantas so they could travel to countries other than Australia to spend the rest of the money overseas, thus having zero effect on our economy.

Did I mention that a lot of the areas Mr Rudd wants to spend money on are the ones totally neglected by the previous mob while they gathered their wonderful surplus into their sock drawers, wardrobes, under mattresses, behind the microwave and anywhere else they could think to stuff it … ?