In some cities, they argue about whether or not streets should have footpaths. Thankfully not so much here.

Of course, for people to walk, they need somewhere to walk to.

An article in the local paper a few weeks ago highlighted the low Walkscores for some suburbs against others: Heatherton was the lowest in the area with a score of just 14.

Ormond, McKinnon, Bentleigh, Cheltenham, Highett and Moorabbin all scored between 71 and 80 – classifying them as “very walkable”. 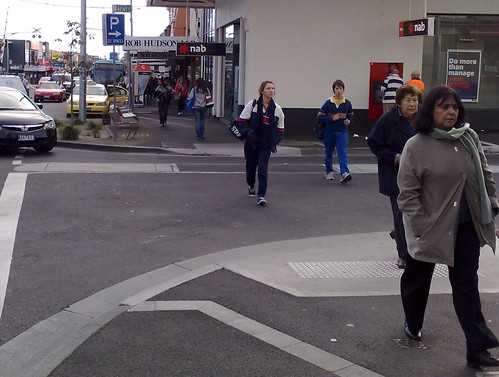 It’s no coincidence that the most walkable suburbs are all those on the railway lines. They were all first developed at a time before most people had cars, which meant transport had to be provided, and shopping centres grew up around them and have (well, mostly) remained vibrant places providing the kinds of services that Walkscore evaluates.

Malcolms Real Estate CEO Frank Hellier said a position within strolling distance of shops and services could add as much as 10 per cent to the price of a house.

Interestingly Walkscore is quoting a study which says that “one point of Walk Score is worth as much as $3,000 (US) depending on the metro area”.

I think that when you throw in access to high quality public transport (by which I mean trams or trains), which is probably present in most walkable suburbs anyway (at least in Melbourne), there’s definitely a premium, and I suspect it’s a lot more than 10 per cent. I know I was willing to pay dearly for it.

Wow! My neighbourhood scored 80! Now if I could only work around here instead of commuting 30 miles round trip every day.

And…my old neighbourhood in Minneapolis scored *98*! Guess I was spoiled living there.

92 for my ‘hood in London. Not a surprise given I can walk to work in 45 minutes and to the West End in an hour, but you do have to pay extra for it!

I agree that the difference between walkable suburbs and non-walkable suburbs can be over 10%, but the ‘dress circle’ areas aren’t necessarily within a 10 minutes walk of everywhere, whereas slightly shabby areas can be. As an example, Leila Rd in Carnegie is lovely but isn’t that handy (especially the eastern end). My street is handy but tends towards shabby, whereas 15 min walk away are the ‘nice streets’ but further from facilities.

It is not inaccurate to say that older areas have often appreciated faster than newer areas, and this needn’t be related to distance from the CBD. Eg at one time Chelsea Heights was dearer than Chelsea. But Chelsea’s house price has grown faster for many years and overtook Chelsea’s. My guess is similar has happened for Altona Meadows vs Altona (and possibly Aspendale vs Aspendale Gardens). In all cases the -heights -gardens -meadows is less walkable than the ‘main suburb’.

Again this doesn’t always hold. Eg Werribee has an old-style main street whereas Hoppers doesn’t. Its house prices are cheaper than Hoppers. Yet the ‘good’ part of Werribee comprising old prewar houses that feel like a south eastern suburbs does attract a premium. On the north side, also walkable from Werribee CBD is a commission type area that remains cheap. There are some associations between walkability and house price, but it’s not a straightforward link (Greenvale and outer Templestowe are poor walkability but not cheap houses).

The Walkscore critieria is pretty good, but has its faults. It doesn’t take into account car traffic volumes and pedestrian facilities. And services seem to be rated equally when in practice we use some 10 times that of others.

Ormond and Moorabbin are both traffic sewers, whereas Centre Rd and Highett Rd are tamer. Ormond, Highett, McKinnon and Cheltenham crucially lack a reasonable size supermarket that in my estimation should be worth maybe 30% of a walkscore (but it can’t be too big as the parking and traffic attracted reduces walkability). You might live practically next door to a Chadstone but it may not necessarily be that walkable.

Interesting. We score 51, which seemed about right. We have good public transport (albeit bus based; railway stations aren’t quite within reasonable walking distance) but 10 minutes or so to shops, which are pretty limited (certainly by Australian suburban standards). We do have wide pavements and no *really* busy road nearby.

However, Mum’s place is only 10 – 15 minutes away on foot and is roughtly similar in charcter but scores 68. The shops are a bit nearer but that’s about it. Not sure how “coarse” the “neighbourhoods” are; maybe they’re done generally by postcode and Mum living across a postal boundary gets counted generally with another area?

Fascinating statistics, though. I’ve become quite engrossed in them when I really ought to be doing other things! :-)

Ian, the Walkscore figure would be more than happy with walking 10 mins to shops, but it’s the range of facilities that it likes. And it doesn’t count public transport, which is its major failing.

Okay, I’ll work through the shops.

I reiterate, UK suburban shopping tends to be much more limited than I;ve seen in Australian cities but is generally more plentiful and useful than in German ones.

The shopping strip has:

plus a few others I;ve missed and some empty units

Actually writing it like that makes me realise just jow varied it is. Perhaps in comparing it to Oz, it’s because the place is so much shabbier.

Finally, I find not including public transport bizarre!