The issue of new trams being too long for some tram platform stops was highlighted in The Age the other day, and on ABC Radio’s AM. 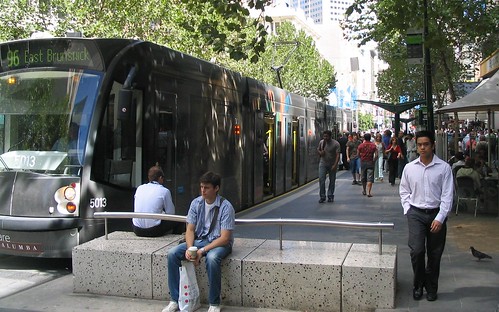 But having got all the information about it now, I don’t see why it’s a problem.

From the document specifying the new order of trams:

Optimal operation of the new trams will require modifications to be made to selected tram stops. The vehicles will be about 32m in length which will become the standard for Melbourne’s trams. Some short platform (below 30m standard) stops will need lengthening by a few metres to allow optimal boarding and alighting. Until all platforms are extended, trams will need to isolate the rear door to prevent passengers alighting where there is no safe refuge or platform.

What the Age reporter was not told, and also wasn’t revealed (at least to me) until the AM story aired was that only 20 stops (out of 300) are too short.

Presumably none of them are on route 96, where the existing five 32m long Bumblebee trams already run. The Bumblebees will return to France in 2011.

So the question is why bother with the expense and time (and passenger confusion, causing delays) of fiddling with the rear door on the new trams, when the first five can just run on route 96 initially. That gives them until Q3/2013 to fix these 20 stops. That’s four years away — surely that’s plenty of time to get it done?

No, the real issue is that the last of these 50 trams won’t be running for about 8 years!

PS. The platform stop pictured above is in Bourke Street, and is not one of the short ones. But it suddenly occurs to me that this is the kind of photo that gets New Urbanism fans all excited, as it shows public transport integrated into its surroundings. See, sometimes we can get things right in Melbourne.

9 replies on “Why is this even a problem?”

… and as a follow-up, the terminus at the moment is only _just_ long enough to allow one of the combino trams to shunt whilst there is another at the stop, but not without some squeezing … wouldn’t be possible at all with even a slightly longer tram …

I don’t think the platform stops on the 86 are big enough for more than a B2, but then again nothing low floor runs up that way so it’s rather strange they even have platform stops in the first place.

I think they must have done those to meet a disability-access quota because they would have been to easy to build, rather than genuinely trying to be useful.

I thought the last door of the Mulhouse trams were already disabled on account of platform overhang? Or have all the 96 stops been lengthened such it’s back in use? Presumably any Melbourne design wouldn’t have doors past 29m or so.

20 stops in 4 years shouldn’t be so bad. It’s not so bad if the last tram is delivered in 8 years, if in 6 years time another order goes in so we have a continual supply, rather than belated lumpy orders as at present.

Any any ideas as to what we are getting, what bidder would you, Daniel prefer?

Candidate one: Bombardier
One possible candidate is Bombardier, with which Downer EDI has a commercial tie up. Bombardier has successfully marketed the Flexity Classic to Adelaide and has been selected as the preferred bidder for both Toronto and Blackpool.
Bombardier has the advantage in that they already have a plant near Melbourne, the one in Dandenong which may put them at an advantage in terms of providing local content.

Alstom has supplied trams to Melbourne before and our 5 hired trams were also built by Alstom. Kelios has a good chance of preferring them. However Alstom doesn’t have much experience with supplying trams to first generation systems. Their main experience has been with new systems quite different in many ways from first generation tramways, including wider curves, less frequent stops and a stopping all stations style service rather than the stopping on demand at frequent stops.

Skoda and Končar are two eastern European manufacturers which are both owned and based in tram savvy countries. Both are experienced tramcar manufacturers and experienced with classic tramway operation. Both companies have each produced one type of 100% low floor tram with bogies that also turn. The Crotram has bogies which don’t (need to) sweep out at big angles in curves because of the configuration, long carbody section on one bogie each and short suspended ones. The Skoda “ForCity” 15T has 100% low floor yet (the three section version just under 32 metres long) it has one pivoting bogie under each end and a jacobs bogie under each articulation (like a B class tram).
By contrast, Bombardier’s low floor flexity range is either fixed bogie models which require you to reconfigure your system with wider curves costing money and much property acquisition, or pivoting bogies at the cost of part high floor.
Similarly, Alstom’s Citadis is currently either a fixed bogie 100% low floor LRV or one with pivoting bogies and 70% low floor. However Alstom is working on a 100% low floor tram that does have pivoting bogies.

I don’t have any inside information on this. From what I can tell, unlike the last time, when the operators used suppliers they had a relationship with, on the face of it this deal doesn’t appear to have that factor involved, though I assume Keolis would get to have their say.

Of the existing new trams, I prefer the Citadis internal layout to the Combino, which has the feel of having hardly any seats.

“From what I can tell, unlike the last time, when the operators used suppliers they had a relationship with, on the face of it this deal doesn’t appear to have that factor involved, though I assume Keolis would get to have their say.”

Really? Downer EDI has a commercial tie-up with Bombardier.

“Of the existing new trams, I prefer the Citadis internal layout to the Combino, which has the feel of having hardly any seats.”

Once again, the Skoda For City is even better, because the front bogie is under the cab, which has a high floor anyway, with bogies under the articulations, the only bulkheads are under the seats at the rear and on each side of the articulation portals, and through the articulations, the floor height goes up to 450mm, with ramp access. At the rear, there are additional bulkheads, but these are the only ones aside from those near the articulation. I was discrbing the Prague and Riga models, both of which have driver controls at only one end and doors only on the right (nearside). But our version would have driver controls at both ends and doors on both sides, so both pivoting bogies would be under cabs.

Sorry, to be clearer: Downer EDI might well have a relationship with Bombardier, but it’s not clear whether this is being used for this tram purchase.

Can you think of any reason why it might not be?

But then again, I did mention designs with pivoting bogies, these have an advantage on tight curves. The tightest curve on the Melbourne network (Corner of Gertude and Smith Streets) is 16.8m, whereas the standard LRT minium is 25m, the current Syndely Light rail has a minium curve radius of 20 metres. 15m is the usual minimum for traditional tramways. But Toronto goes right down to 11 metres.
On curves tighter than 25 metres, fixed bogie LRVs have cornering problems and are prone to derailment. Just look up the Čapek and Kolář report!