An article the other day revealed the latest passenger counts on trains show that overcrowding during peak hour has dropped slightly. I don’t have those figures to hand, but I do have these graphs from 2007 handy, and I thought it might be interesting for people to see how the various lines compare. Patronage has grown, but the patterns haven’t changed much.

They show the loads by counting the numbers as trains reach North Melbourne, Jolimont or Richmond. The target “desirable” number is 798 people per train. More than that is clearly shown on the graphs, and is called a “load breach”.

I’ve snipped this up to just show morning peak periods, which are busiest. You can see why the Sydenham line is rated as the worst for crowding, with some trains carrying over 1100 people. 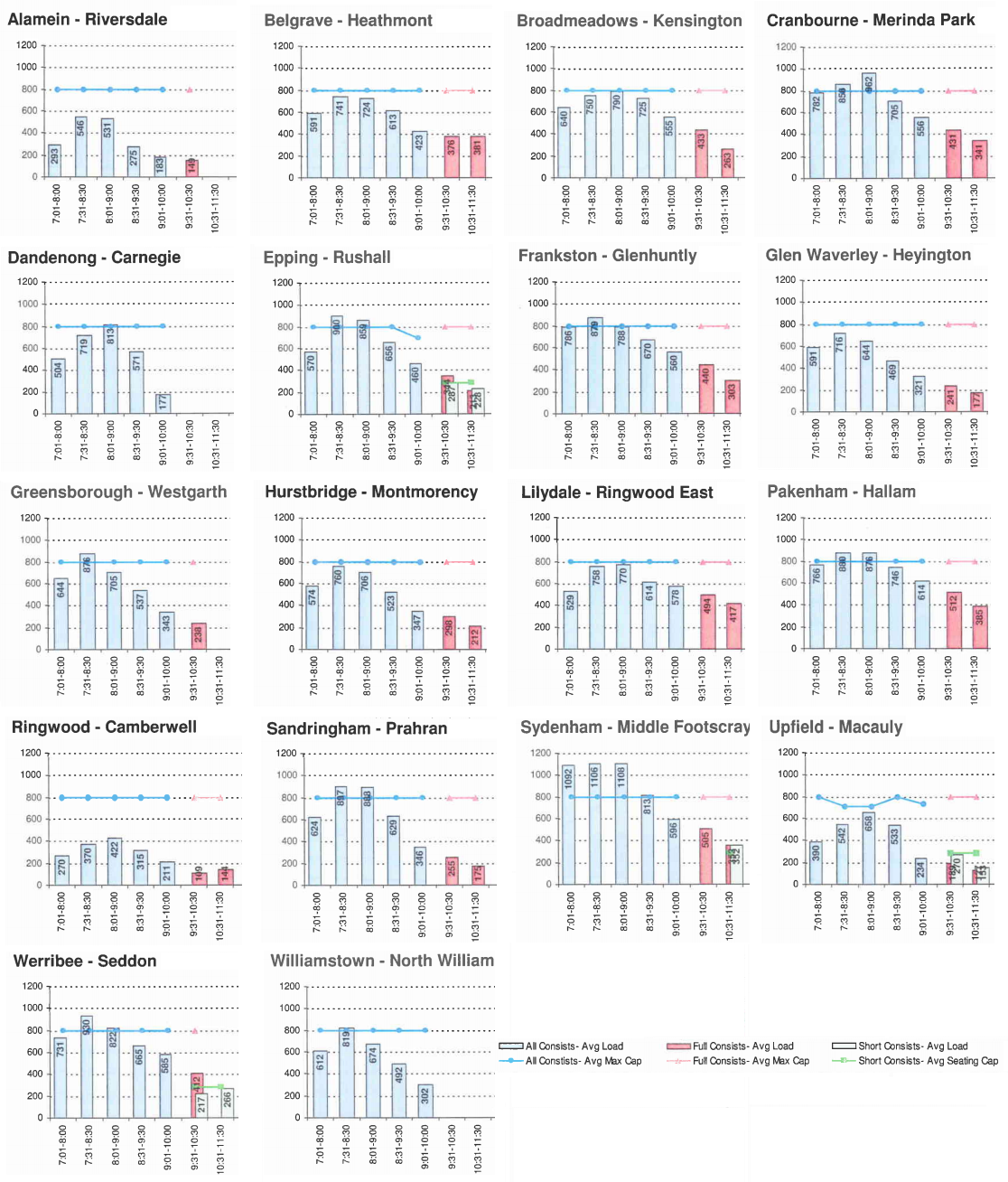 The busiest lines are those the government is now throwing money at:

Sydenham is clearly the worst. It and Werribee will benefit from the Regional Rail Link project, which will free up space on the line taken by the country trains to allow more suburban trains. Werribee gets the Laverton turnback, and Sydenham will also be helped by the Sunbury electrification (see my previous post on this). Craigieburn’s got a stabling project going on, and Albury trains will move onto the Standard Gauge line soon.

Epping and Hurstbridge are getting a bunch of upgrades as part of the South Morang project (though for some reason they’re reluctant to talk about it). Dandenong/Pakenham/Cranbourne has the Westall upgrade underway which will help provide more trains. Frankston is okay for infrastructure, it just needs more trains. Sandringham has got some couple of extra trains since ’07.

(Some argue there are easier/quicker/better ways of getting more trains running than the above projects. I’m not debating that here — just stating what’s funded and happening.)

The graphs also make it clear why some lines aren’t getting extra trains and infrastructure. If you’re in the leafy eastern suburbs on the Belgrave, Lilydale, Alamein or Glen Waverley lines, or on the Upfield line, then sorry — the others have it worse than you. (And remember, these figures indicate a typical day — when things go screwy, it’s a whole new ballgame.)

Not to say every line shouldn’t get more frequent trains mind you. The 20 minute peak-hour services from Upfield, Altona and Williamstown are like some kind of bad joke, and ditto to the 30 minute services most lines have after 7pm.

I’m still of the view that to spark further patronage growth outside peak hours (including evenings and weekends), that there should be trains at least every 10 minutes where possible, 6am to midnight, and single line sections within the Urban Growth Boundary should be duplicated to allow that.

And there’s other, cheaper, operational changes they could make to improve things. There’s certainly a lot more to be done.

10 replies on “How crowded is your line?”

How do they calculate passenger counts? Is it by ticket validations and clever network analysis, or is it by periodic visits by people with clipboards counting the passengers on each carriage? If it’s the latter, I wouldn’t be surprised to see inaccurate figures. Last year when I saw them do a count like this, it was during university holidays when numbers were quite low, one week after passenger numbers had been at their usual peak.

The Westall upgrade, in part, could have been implemented at Oakleigh years ago; with it’s long-established 3rd platform barely used they could have been running extra (empty) trains from here to the city – express or not – taking the load off the regular services.

Where does the data come from? Is there just raw data available for slicing and dicing?

Philip, it’s from the Load Survey of May 2007, which is generated by the people you see a couple of times a year with clipboards. Apparently they’re known to be pretty accurate. (Ticket validation figures have known flaws, the most obvious one being in the PM peak when you validate in the central city, the system doesn’t know which train/line you caught.)

Jayne, true. The reason they’re doing Westall is because the train depot is there, so trains will be able to run from sidings directly into service.

Art, I’ll have to dig out the rest of the report and see if it has more raw data. I have seen some other raw data showing precisely which trains were the most packed on the survey days, but it turned out to be missing some stuff, so it wasn’t as useful as it might have otherwise been.

There are sidings at Oakleigh but the don`t have train storage fencing and have a public road bridge over them meaning that they are not the most secure places to store trains.

Tom, once upon a time Oakleigh had huge rail storage/work yards…then they flogged ’em off to developers to build the ugly monstrosity called Oakleigh Central.

There are still sidings at Oakleigh but not nearly as many as there used to be.

The reason for the once extensive yard and additional platform at Oakleigh was that most suburban trains once terminated there, with a few continuing on to Dandenong (although both were electrified in 1922). If you look at the 1945 arerial photography, Oakleigh is clearly the outer extent of urban sprawl at the time (definitely not the case today!!):
http://www.lib.unimelb.edu.au/collections/maps/historical/1945melb/l_sheets/849c1b.jpg

Also it was the junction with the Outer Circle Line – I think the last train ran on the southern bit of the line in 1895. The ‘Junction Hotel’ in Oakleigh was named after it. The above photo shows Dandenong Road as concrete with a short section of bitumen where the level crossing with the outer circle line was surfaced over.

Also note the level crossing at Warrigal Road with the overpass not being opened until 1968. Huntingdale Station was called Eastoakleigh (yes, one word) and opened a few years after electification. There was awful level crossing and North Road/Huntingdale Roads where North Road crossed at 90° to the railway line despite the road being at about 45°. The overpass was opnened there around 1972. The 1966 Melway still has the crossings
http://melwayed1.ausway.com/069.jpg

Notice in the 1945 photo ‘Huntingdale Road’ was called ‘Box Hill Road’ at the time. You will also find the southern section of Blackburn Road was called Mays Road until the mid 1950s.

As pointed out, the yards at Oakleigh were built over in the late 1980s as Oakleigh Central. I remember the supermarket being named ‘Coles New World Extra’ at the time. ‘Extra’ what exactly it was i dont quite know!!

The section of the Outer Circle South of Ashburton was dismantled in 1940. The section from Ashburton to Alamein was relayed in 1948.

The Huntingdale overpass is a horrible mess. They should have done something more like Boronia where they lowered the railway and put in a normal intersection. This should eventually be done anyway.

The southern bit of the Outer Circle Line closed in 1895 beyond Ashburton, although the tracks remained in place and overgrown until around 1940 as correctly pointed out, along with the Black Bridge near East Malvern, with Alamein reopening in 1948 to service the nearby Commission estate. From Vicsig:
http://www.vicsig.net/infrastructure/line/alamein
The 1922 overhead stauncions between Oakleigh and the ‘down’ side of Hughesdale therfore have room for three tracks beneath.

Before the Darling-Glen Waverley extension in 1930 which was pushed by the then Shire of Mulgrave, I’m assuming there was a plan of sorts to run trains fron Darling through to Oakleigh on the southern bit via the old Waverley Road station. A developer pushed the suggestion as a selling point for ‘Waverley Station Estate’ in 1923; the old advertisement gets a good airing on the railway gunzel pages:
http://www.maxus.net.au/dbtw-wpd/textbase/stonnington/images/m12088.jpg

Notice ‘Poath’ (Hughesdale) station was to be on the ‘up’ side of Poath Road before being built on the other side in late 1924 (opened 1925).

Upon opening of the Glen Waverley extension the line was cut through the old OCR embankment. As also brought up by the gunzels:
http://www.railpage.com.au/f-t11337191.htm

Yes Huntingdale is a pain for those trying to access Huntingdale Road north/south. Fairly standard practice for the time that they don’t do so much these days.