On Thursday I noticed a City Of Melbourne worker wandering around Collins Street with a street sign under his arm, apparently puzzled as to where to put it up.

Today I noticed it had gone up. In the wrong place. 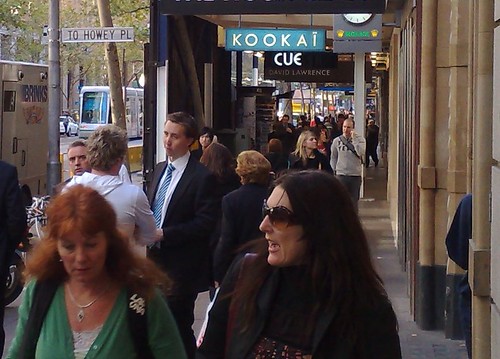 There is no way through to Howey Place there. If you follow it you’ll walk straight into a Kookai store, with no way out the other side. (Though you might come out with one of those bags of theirs that large numbers of women seem to use as pseudo-handbags.)

I reckon the sign should be about 25 metres to the east, where you can cut through Collins 234 (The Building Formerly Known As The Sportsgirl Centre), which takes you to Howey Place.

I’ve put a feedback note into the Council via their online form. We’ll see how long it takes for them to fix it.

Update Saturday 27/6. Noticed yesterday afternoon the sign had been moved to the correct spot.

You’d think he might have actually followed where he had the sign pointing to see if it led to the right place. *raises eyebrow*