Level crossings like the one at Glen Huntly slow down trams, cars, pedestrians and trains alike… in fact due to the tram/train crossing (one of four in Melbourne), trains have to slow down to 15 km/h.

And the confined pedestrian 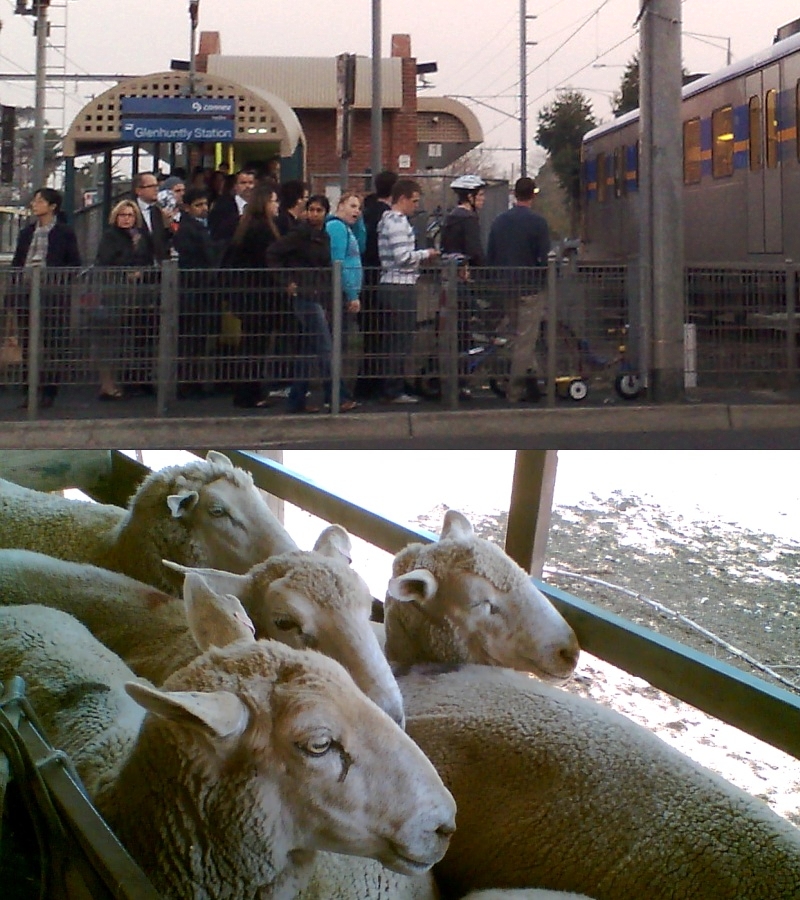 There’s no organised programme to get rid of Melbourne’s level crossings, as was almost completely done in Sydney in the past few decades. Instead they’re doing about one every year. At that rate it’ll be centuries before they’re all gone. We might all be travelling by teleport by then.

I hope so. Teleport me, baby! As long as none of us end up like the guy in The Fly. That would be somewhat disappointing.

The inner section of the Glen Waverley line is one of the worst bits, as you encounter two of the four crossings with tram tracks (Burke Road, Gardiner and Glenferrie Road next to Kooyong). I never quite understood why they didn’t seize the opportunity get rid of the level crossing at Burke Road when they did the Monash overpass in the mid 1990’s. One can be stuck for half an hour at this crossing for if the draw the short straw with the train timetable. Interesting the split boom barrier arrangement at Glenferrie Road to avoid the tram overhead (the old gates lasted longer at this location for this reason)

Traffic and trams sit for ages as the trains inch across at something like 15km/h (slow enough to avoid derailment and ‘fast’ enough to coat through the isolation points around the overhead square which switches from 600V DC to 1500V DC as the train passes through. At Glenhuntly the express from Cheltenham grinds to a halt and inches across Glenhuntly Road for much the same reason. Riversdale Road on the Alamein line rounds out the four

Insteresting to note that one of the tram/train level crossings removed early on (post electrification) was actually Epsom Road at the Showgrounds in the mid 1920s. The original level crossing can be seen below:
http://www.victorianrailways.net/photogallery/suburb/sub05/sub05_17.html

Another traim/train level crossing was located at Elsternwick until the 1960s, hence the station architecture and cutting at that location

I guess the inner section of the Glen Waverley Line was essentially a branch of the Outer Circle line during the 1880s land boom and as such built ‘on the cheap’ hence the two crossings remained, with the 1930 extension being all grade separated.

Who here has been on the Glen Waverley line on the last few weeks? The crossing at Kooyong has been downgraded to 10km/h (it was initially 30km/h) due to track condition, but in reality most train drivers do about 5km/h over it.

And even at 5km/h, it feels bumpy as hell, not surprising when you look at the track itself. I wish they’d just get rid of it.

Daniel, why do you keep making references to Sydney “having none” when it has been pointed out on your blog before that there is still a few in outer suburban areas?

Andrew S: Yeah, agree, they should have done Burke, Tooronga and Toorak Rds as part of the freeway work. Glenferrie Rd is a bit more distant, but like the others, there is surely a benefit to removing bottlenecks for major tram and train routes. That’s a great photo you linked to!

Somebody: Yeah it seems to be a cycle… the speed over the tram/train crossings gradually gets slower, until it has to be renewed, and they spend a bunch of money and work on it, bump the limit back up to 30, then as it wears away, we repeat the process. … Oh, and read what I wrote again. I didn’t say Sydney completed level crossing elimination; I said it was “almost completely done”.

I hope you don’t, though, get problems with people becomin impatient at level crossings and then doing stupid things. This is – unfortunately – a none too rare occurrance here in Britain.

Take a look at:

The first of these crossings is ungated (rare, this one is in Wales, as can be seen from the bilingual signs). Gateing crosings doesn’t help, though. The second clip is of a notorious one, not far from where I live.

>> As long as none of us end up like the guy in The Fly. That would be somewhat disappointing.

The tram/train squares should have been done long ago.
As for other level crossings, let VicRoads pay for it, and don’t let them interfere with train timetables. They’ll get done soon enough then.

Reminds me of Perth, which had lots of level crossings with ‘sheep mazes’ for the pedestrians when I was there last.