This post has been superseded by this one from 2015, which used far better statistics 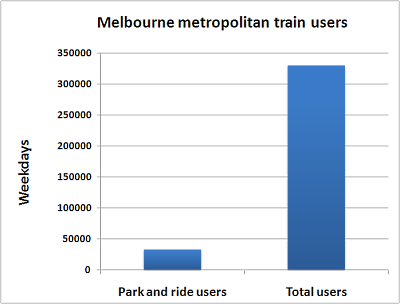 Source: Total users — Connex figure of 360,000. P+R users — based on an old figure of 27,500 spaces plus an estimated thousand new spaces added recently, times typical car peak hour occupancy of 1.15 (VicRoads). Obviously some people also park in nearby streets, but I suspect this doesn’t account for many compared to the numbers using the car parks themselves.

The cost of additional parking? In the current programme of upgrades,it’s costing $29.2 million for 1,700 spaces — or $17,176 for each individual space.

In contrast, running frequent (say, every 10 minutes) buses into the stations would help people travelling all day, not just the first-come-first-served who get the parking spots, and save the land around railway stations for more useful pursuits, like housing and retail. Well, anything other than car parks, actually.

(Oh wait, maybe I should have used a pie graph.)

This post has been superseded by this one from 2015, which used far better statistics

9 replies on “Park and ride”

Park and ride facilities are stupid, there is one in Doncaster to catch a bus. If people want to get to the train station if they do not live in walking distance is to extend tram lines and have feeder buses that connect and wait for the train. It would greatly improve the role of buses and trams and the efficiency of our system.

Where they probably are justified is on the urban fringe, where frequent bus feeder services aren’t practical. One proposal for instance is to electrify/extend the Frankston line to Baxter, and build a P+R ride there on cheap land.

OT I know, but does the PTUA have any information about the re-development of North Melbourne train station? I get the train through there every day and I swear it has barely progressed in the last 12 months; it must be Melbourne’s slowest construction site and long behind schedule. I can’t recall the last time I saw any work occurring there.

The North Melbourne upgrade was originally scheduled in MOTC (2006) to be completed in 2010, and unfortunately they’re sticking to that schedule. Given the changes to take Werribee out of the loop in peak hours, you’d have thought they would have brought the completion date forward, but obviously that didn’t happen.

What’s amazing is that given construction started in May 2007, it will have taken about three years by the time it’s finished. In contrast, Eastlink (about 39km of motorway, including tunnels and numerous bridges) took about three years to build (March 2005 to June 2008) — which just shows how quickly you can get something done if it’s considered important enough.

Sorry, that made me laugh… if you paid a visit to my local station carpark, you’d know why there more people on the trains than using parks. ‘Cause after 7.45am, you can’t get a park for love nor money at my station. There’s no room!

There’s a bus stop about 50 metres from my door. I refuse to use it because the buses never meet the trains on time and I get up early enough, thanks.

Proved my point exactly Ren. The buses are crap.

Now that I’m back from my Adeliade stint I thought I might have a whinge on this subject. I travel from Sandown Station (early) and have the luxury of getting dropped off every morning. That is around a 6-8 minute trip to go 5 kilometres. If I were to use the bus service that stops near my house, it is around 25 minutes to go to Dandenong, three stations further back – considering this it is a no brainer, regardless of service frequency. The bus service – Route 848 is like most in the area, taking the scenic route by winding through local streets and sitting at time stops before getting anywhere!!

On the carparking issue, the Melbourne Racing Club at Sandown have done their bit to discourage parking at the station – a large vacant block adjacent near the DOWN track to the station used to have the gates open to allow for parking by rail users for many years. Whilst I was away the racing club have since blocked the entrances up and put up large signs saying ‘Private Property – Trespassers Prosecuted’. Meanwhile the land serves no purpose whatsoever and is still completely open to pedestrians. As a result, nearby Alamein Avenue is now full of parked cars for a length of 200 metres. The local residents must be thrilled at the new arrangement here.

Pie charts should rarely be used. It is more difficult for the eye to discern the relative size of pie slices than it is to assess relative bar length

See an example at

Andrew, yep, I hear you. If we had proper buses, they’d be like trams – frequent (sub-10 minutes) AND along direct routes, not the magical mystery tour.

Robert, yeah, see the main reason I didn’t use a pie chart was I wanted to emphasise the relative sizes. Mind you, the second column should have been “other users”.