I know Barack Obama ultimately may not quite live up to expectations, but I have high hopes, and I’m certainly not sorry to see the back of George W Bush…

I had to laugh when I saw a photo of the Ikea Oval Office they set up at Union Station in Washington DC, complete with Secret Service agents on guard and an Ikea flag. What a brilliant piece of marketing. 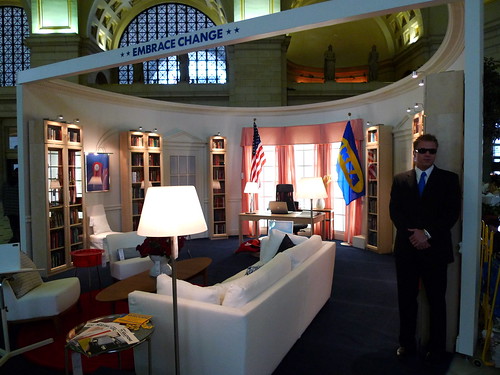 They’ve also set up a web site to go with it, where you can design your own Oval Office with Ikea furniture: EmbraceChange09.com

5 replies on “I for one welcome our new Obama overlord”

Yep, the world automatically became a great place this morning when the Messiah was coronated! Birds started singing again after 8 horrible years,roses started to bloom all over again, and the sun came out again! Or maybe it should go back down again, as global warming has been responsible for all the record cold temperatures in the northern hemisphere this last month, as well as being responsible for making 2008 the coldest year of the decade! Funny, haven’t seen Al Gore lately!? One question for all those who think Obama will be the Great Saviour- what has he achieved up until now? Take your time, I can wait! Simply put, on election night, Obama was 4 years into his first term as a US Senator, who had no significant achievement, or authored any new legislation! His only real decision making has been the 130 or so times he voted ‘Present’ during his tenure in the Illinois Legislature! No foreign policy experience to speak of, and now is the leader of the free world! On the other hand, his opponent, John McCain, had been a Vietnam veteran, spent 6 years of hell as a POW, 20 years in the Senate, author of much legislation, far more experience by far, and because of all the bias of the media, he got elected! And no mention of the dubious associations of his- Jeremiah Wright, Bill Ayres, Rod Blagojevich! Never has the media been so derelict in its duty to impartially inform as it was during this presidential election, just so they could get their man Barry across! Yes, as a conservative, I wanted McCain for President, and was quite disappointed when he lost, and no, that doesn’t make me racist, I believed that McCain was the better man than Obama, and you don’t see McCain carrying on about this election like a certain global warming prophet has for the last 8 years! And for all the Bush haters out there, who will now have to re-direct their hatreds towards something else, don’t forget, seven and a half years ago, we witnessed the most atrocious and despicable event in human history, and rather than back down and cower, President Bush responded by attacking the apparatus which allowed those attacks to happen, thus preventing other such and even worse attacks from happening! To think that terrorists would leave us alone simply because we do not attack them is simply naive- just ask anyone living in southern Israel! People like St David Hicks do not deserve our sympathy- after all, they are assisting in the goal of killing us all, simply because of the freedom of our way of life! And to blame Bush solely on this economic crisis is wrong- admittedly he didn’t control the situation like he should have, but the seed of this crisis were sown during the Clinton Administration, when legislation was passed forcing banks to give home loans to people who could not afford them, hence the numerous bank collapses! And in the last two years that the economy has gone bad- the Democrats have controlled Congress! But I digess, and I do wish President Obama success, as the world economies need to recover, and maybe all the hatred directed by the Left towards Bush can disappear, and bring about a less partisan society! I do not support most of Obama’s policies, but I will not hate him the way Bush was hated by the Left! For all those who think he will solve everything, just remember, he is only a man- one who has a very difficult task ahead of him! Farewell President Bush, welcome President Obama!

It’s funny, I could have sworn McCain had a “prophet” of his own, namely that of a zombie Jew called Jesus who could telepathically communicate with him.

That was a fine rant, Andrew V…though I’d have liked some coherence, punctuation and if you would be so kind – some evidence.

Thankyou Reuben, for showing the world your intolerance towards the Jewish and Christian people, by referring to Jesus Christ as a ‘zombie Jew’! How is it you are always extolling the virtues of atheism, that it is a philosophy of tolerance, and yet you seem to be as intolerant towards people with religious beliefs as you claim that they are. And if I’m not mistaken, I believe President Obama believes in the same ‘zombie Jew’ that Senator McCain does. Did he not say at the end of his oath of office, “So help me God”?
I thought I did provide you with enough punctuation Reuben, obviously it wasn’t enough! And as for proof, firstly his voting record:
http://www.ontheissues.org/Economic/Barack_Obama_Government_Reform.htm#Voting_Record
And as for Clinton’s involvement in the current financial crisis:
http://www.businessweek.com/the_thread/hotproperty/archives/2008/02/clintons_drive.html
And Obama’s associations:
http://abcnews.go.com/blotter/story?id=4443788
http://newsbusters.org/blogs/rich-noyes/2008/09/23/barack-obama-bill-ayers-stanley-kurtz-makes-connection
http://blogs.abcnews.com/politicalpunch/2008/12/questions-arise.html
http://www.suntimes.com/news/metro/blagojevich/1321610,blagojevich-calls-obama-expletive-120908.article
http://citizenwells.wordpress.com/2008/05/18/blagojevich-obama-rezko-illinois-governor-governor-in-middle-of-case-chicago-tribune-may-17-2008-rezko-trial-political-corruption/

Hope I’ve provided some fine reading for you, and I hope, Reuben, we may all experience the hope, change and tolerance that President Obama wishes for us all! Thankyou!

Oh I’m tolerant of any religion. But I still criticize them; criticism is not intolerance. I consider religion and politics to be perfectly analogous. You, of all people, don’t hesitate to sink your fangs into liberal/left wingers. Fair enough. But with religion, nope! And am I wrong about the Jesus/Jewish/Zombie thing? Is he not a zombie? How does he hear people’s prayers then? It’d be laughable if it wasn’t so popular.
I am not fond of argument ad hominem, so cut it: http://en.wikipedia.org/wiki/Ad_hominem

Thanks for that reading material. It doesn’t really show how the Democrats are inherently bad. I don’t support the democrats either for what it’s worth. But when deluded idiots like Sarah Palin talk earnestly about crap like this: http://www.youtube.com/watch?v=xRkWebP2Q0Y&eurl=http://www.grods.com/?s=Sarah+Palin&feature=player_embedded I begin to question the Repugs’ choice.
Palin also considers the earth to be 6000 years old (an error as ridiculous as assuming the distance between Ulanbaator, Mongolia and Tokyo, Japan is three kilometres). That alone is cause for concern.

http://abcnews.go.com/blotter/story?id=4443788
Is not an indicator of Obama’s policy stance. He has, I suspect, taken steps to distance himself from this guy. But to say Obama’s political veracity is in doubt because of this guy is tantamount to suggesting that vegetarianism is dangerous because Hitler was a vegetarian.

http://newsbusters.org/blogs/rich-noyes/2008/09/23/barack-obama-bill-ayers-stanley-kurtz-makes-connection was written by a journalist who’s a member of a right-wing institute called the Media Research Centre. It’d be in his interests to slander Obama.

http://www.suntimes.com/news/metro/blagojevich/1321610,blagojevich-calls-obama-expletive-120908.article does not invalidate Obama’s stance on world issues and domestic issues.