Whatever the reason, sometimes it’s great to try something new. The idea for this one came from noting the kids getting hooked on Star Trek.

Yesterday we headed out for an hour-long sail around the bay on the Enterprize, the replica of the 1829 schooner that brought some of Melbourne’s first settlers from Tasmania.

If you saw it launching from Gem Pier at Williamstown, you might be fooled into thinking this replica was diesel powered. But they only use the engine for the few hundred metres close to the pier — once we were well clear, the engine went off, and the sails went up. 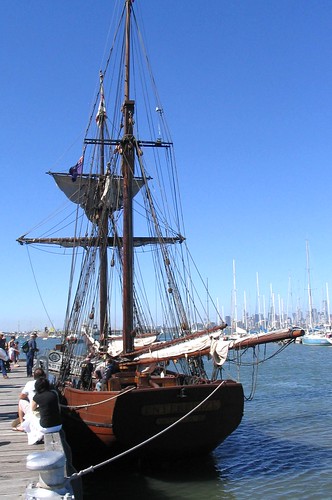 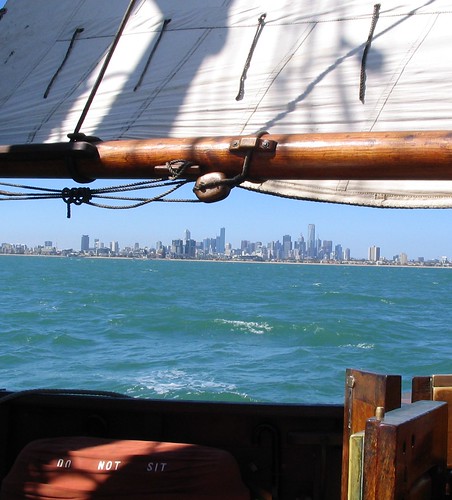 Part of what made it really enjoyable was the crew wasn’t shy at asking the passengers to help. We all helped pull some ropes to get the sails up and secured, and a bit later on they enticed myself and then Marita to climb up the rigging. Obviously we had one of those namby-pamby safety harnesses.

The weather was gorgeous, the bay not too choppy, the view terrific, and it was truly wondrous to be moving along powered by nothing by the wind.

The cramped quarters down below and all the work the crew did gave a real taste of what life at sea might have been like in the 1800s — well, in nice weather, anyway. 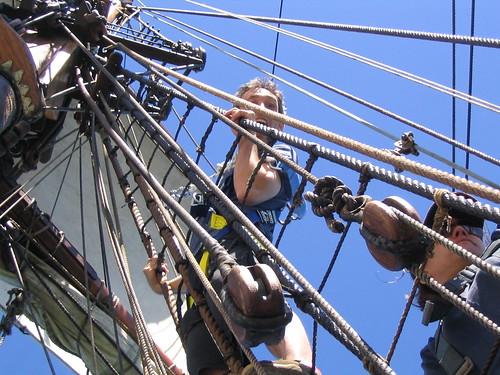 After an hour we arrived back at Gem Pier, plenty of people watching from the pier. They really didn’t know what they missed, it was one of the best $50 (for the four of us) I’ve ever spent. I can’t recommend it enough.

Daniel, you look like a little kid on an adventure playground in the last shot. As the fourth Doctor once said, “what’s the point in being adult if you can’t be childish sometimes”. Fair enough. :)

Great idea – thx for the heads up.

Hey! We were in Williamstown yesterday too. Shame we missed you.
What a great experience. Will consider ourselves in the future I think!

Looks fantastic, might pencil that idea in for my Dad!

What a great day out for the kids. Cheap at twice the price.

I agree it’s great to try something new and I might take a sail on this ship one day. The price is much cheaper per person than that Southern Star wheel.

Another cool experience is skydiving. At one time I would have been too scared to do this but I tried a tandem jump and it was one of the coolest experiences I have ever had. I liked it enough to jump a second time and I took along a friend that was scared of heights and had him jump too. He loved it. It is a super rush and you can’t stop smiling for several days.

That looks like such fun! I’m honestly a teeny bit jealous of you. I was very lucky to have grown up with a dad who loved sailing. I have fond memories of sailing trips in the Great Lakes in my teens. At that age, it seems big enough to be the ocean. The loveliest trip was around the Bahamas when my dad was retired. Sadly they sold the boat soon after that. Too much work. I love sailing though. Something about the wind in the sails, the feeling of motion under your feet, the sun (hopefully), and freedom and enjoyment of it. But yes, seasickness is NOT fun LOL. Nor is rain, cold, wet, and very wavy water conditions. My hat is off to those who braved those conditions back in the old days.