Haven’t blogged for a bit, so here’s a brief catch-up.

I helped Tony and Rae and family move last week. The inevitable comment that pops up when geeks move house: packing the moving van is like Tetris. Of course, when you get a full row of boxes, they don’t disappear and make more space… 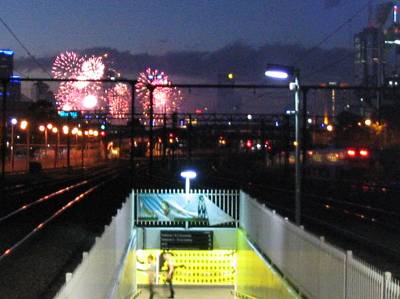 The kids and I watched the early (9:15pm) NYE fireworks a short distance away from the action — Richmond Station platform 4, which unlike the city centre, was not crowded at all, apart from half-a-dozen Connex security guys also watching. They said their shift was from 5pm to 3am. The view was certainly better than from the park near home, where we watched last year, though of course not as good as being in the thick of it.

My Wii fitness level has been up and down, all over the place. The best: 28, the worst: 56. Marita, it turns out, is very good at Wii boxing, knocking-out virtual people with some enthusiasm.

Rose would have been 30 on Friday, and the family gathered to pay their respects. It was doubly sobering to see that in the Nagambie cemetery, she now has a neighbour, apparently a local woman in her 40s who also died in a car accident.

On a happier note, the Doctor Who Christmas special will air in Australia on January 25th. You can watch the first couple of minutes here.

A Doctor Who spoiler follows…

They’ve just announced the new Doctor will be Matt Smith. I hadn’t heard of him either, but he’s got a prominent role in Party Animals… one of those shows I have been meaning to watch but haven’t. He’s 26… I’m truly getting old now that the Doctor is so much younger than me. (At least Tennant is about my age.)

What’s amazing is that they’re announcing him now, roughly a year before he’ll actually appear on-screen, and they did so via a BBC1 TV special, not shown just on TV but also on big screens around the UK.

That Dr. Who news is…erm…a bit annoying. My self-centred neurocortex is crying out to have Dylan Moran fill the role instead. I don’t know much about Matt…though his hair is incredible. By the way, Daniel, have you heard the soundtrack album of season 4? T’was not Murray Gold’s best.

I guess I should also ask you, seriously, do you think public transport news will be looking up in 2009? Or are you as pessimistic as I am? History has taught me to be pessimistic. :)

The Tribe all took a vote and we think he’s far too young but he must have the acting goods or he wouldn’t have got the gig; we shall wait for the episodes to pass final judgement.

I’m quite appalled at the choice of Matt Smith for Doctor. My personal choice would have been Richard E Grant. I can not help but think that Smith is some silly attempt to please an imaginary ‘target audience’. The same kind of decision that gave us lame companions like Rose and Donna. The same kind of decision that produces shows such as Hanna Montana (or whatever she’s supposedly called). It is clear that Smith has led a short and sheltered existence which has given him nothing to fall back upon when he’s meant to be playing a nine-hundred-and-something-year-old. The Doctor is supposed to have gravitas. Watching Tennant scare the shadow-creature in the Library episode by simply getting it to read up on him was barely plausible. Having this tyke try that would be laughable. And imagine River Song talking about Smith’s ‘old eyes’! Poppycock! I predict that this will be the moment that will come to be accepted as the point at which the new series jumped the shark.

I know that Moffatt supposedly played a role in this choice. But everybody makes mistakes and I think this one is a big one. If I’m wrong, I’ll have to do some hat-eating, I guess.

If Smith wants to get ready for the role, I suggest he immediately head off for some war zone, learn the local language, get involved, fall in love, almost get killed, grow to passionately hate someone, fall in love again, have his actions lead to the suffering of others and then come back with the weight of all that on his shoulders. It’s a fairly extreme thing to do but he doesn’t have a decade to learn about life.

I reckon I should go Marita in Wii Boxing. I have my signature move called ‘whipping the horse’.

I am almost undefeated! The only person who has beaten me is my mother.

Well, watching the interviews with Matt Smith he looks like he’ll be fine, my only critiques is that he seems an awful lot like Tennant (physically). I’d have thought they’d go with someone completely different (maybe ginger? ;) ).

My Wii acumen is limited to providing target practice for my sons when playing Medal of Honour! I’d be mere cannon-fodder for Marita, I fear.

Thoughts with both of you at this difficult time.

Thinking of Rose, and the loss of her to her family and friends.

Pay no attention to the WiiFit fitness age thingy – it seems to be totally random!

I got a WiiFit for my birthday in May, and used it religiously for a fair while. I was super impressed with the results. I took a bit of a break after I did city2surf (would never have considered doing that before the WiiFit!) and now have to get back into the routine…

I lost about 10kg since getting the WiiFit, and have managed to keep it off through Christmas, so I’m pretty happy with that.