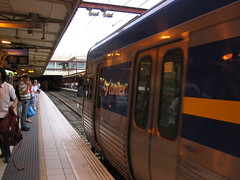 Attributed to a government spokeswoman:

as part of the Victorian Transport Plan, 38 new trains would be put into the system in 2009, increasing the train fleet by 40 per cent.

— The Age: One in 10 trains either cancelled or delayed

Let’s be charitable and assume they’re not actively lying. They’re probably counting the 32 extra “new generation” trains flagged in the Transport Plan that will follow. But they will be replacing the Hitachis and (some of) the Comengs, not expanding the fleet.

What would we have done without you Daniel?

I had a gorgeous experience recently with Connex; Epping train cancelled and the following train afterwards was late…and it was a Saturday. Half an Hour wasted. :)

Yep, good call, Daniel. I call BULLSH!T on that one, too. Someone doesn’t know their math. And I’m betting those Hitachi trains will remain in the fleet for a good long while to come.

Ahhh,they would be employing the same method of “smoke ‘n’ mirror maths” as what Brumby has used to justify the north-south pipeline.
As long as the public can assist the govt with their maths, we’ll keep the buggers off the streets and out of mischief :P

Why would they get rid of any of the marvellous Comeng trains?

As they say – “Lies, More Lies and Damn Statistics” – You can make any number give you the answer you want….. It is up to everyone to see through all that to know the truth, thanks Daniel for your good work in 2008… happy New year

Agreed with Andrew…what’s wrong with Comeng? They crap all over the others. And XTrapolis Trains have Crap air conditioning. I’d rather a Hitachi with open windows.

Comengs do have reliability problems, with aircon known to suffer on hot days (!), but whether or not they’ll need replacing in the next few years, the VTP (like MOTC before it) does flag it. I forget which year they plan to start it.

LIARS! Brumby and Kosky are plain mad if they plan to get rid of the Comengs. There would be shocking overcrowding and another repeat of the Hitachi debacle. The comengs just need refurbishing in the interior.

Uhmm, the interiors were already refurbished around the start of this decade, and half of them are getting new seats now. Do you just want shinier trains every few years? ;)

My view: Flog them for years to come. They should really consider having incremental purchase of new trains, rather than needing another massive order every few years.

Regarding the Comeng train possible withdrawl comments (I find rather hard to believe) – they have more room than the newer ones which seem to be designed more for European underground systems, so I’m told anyway (re Siemens brake problems in the wet). They are also easier to access at peak than the Siemens with two sets of doors per carriage. The down side of the Comeng is the air conditioning – generally useless on hot days, at least on Pakenham and Cranbourne lines anyway!!

Andrew, they don’t spell it out in the VTP, but I’ve had it verbally confirmed that intent remains the same as it was in the Meeting Our Transport Challenges plan from 2006, which says on page 42: “Commencing in 2010-11, the Government will purchase new trains to meet the demand for additional trains that will be created by improvements in track capacity. The program also provides for the replacement of Comeng and Hitachi trains and the expansion of the fleet to operate additional services to address overcrowding.”

While the Siemens trains are commonly used on European metros, they are of a modular design, and our government chose the two-door configuration. The braking problems in the wet/tunnel thing doesn’t really stand up when you consider that so many Metros include long sections of track which is not underground (something I’ve discussed recently.)

Some Comengs in the fleet are about ready to be scrapped. They are an unreliable train, and the problems are building up.

Many of the units will be fine for service for years to some, but some, like 301M and friends are constantly being booked for faults.

So they’re withdrawing the last of the Hitachis in 2010-11 also … perhaps they could hang onto them a bit longer, say till late 2012 to make the 40th anniversary of their introduction!!!!!! Not too bad I guess considering old Harris carriages are alive and well on some loco haules V/Line services (themselves now a rarity however)

Regarding the Siemens braking problem – what was the real cause of problem? my information about the ‘underground based design’ only came from a bloke I know who inspects tickets on trains for a living.

I’m going to put my hat in the ring and suggest the following:

Old trains retired, new cheap models are brought in. After some time, it is realised that the old ones are needed again. Government ends up spending hundreds of thousands of dollars to buy back what they sold off for change.

But innit going to be more congestion at North Melbourne and Flinders St and many many more junctions with more trains? They doing anything about that?
Um yeah the Werribee line loop changes did FA to fix the congestion; it’s seriously far worse on the Willy line now than before. Every day stopping for five to ten minutes.