The Friday before leaving for Warrnambool, I’d tried to find a hire car company based in central Warrnambool — that is, reasonable walking distance from the hotel. The hire car aggregator sites like DriveNow couldn’t help me, so I looked at the big companies’ web sites, in conjunction with the tourist guides and Yellow Pages.

Avis, it was claimed, had a branch at the Warrnambool airport, the location of which I was not aware of, but in any case it had evidently closed. Budget had apparently previously had a conveniently-based branch, but had left town. Likewise Thrifty, also departed. This left Rent-A-Wreck (no thanks), Hertz (located conveniently some 5 km west of the city centre) and a couple of companies that were close to the CBD, but turned out only to hire out buses.

So I could hire a bus if I wanted, but getting a car within walking distance was going to be tricky.

At one point I was seriously considering abandoning the train + car hire idea as All Too Hard, and just driving all the way down.

As far as I’m concerned, if you have a hire car business in a town that gets tourists, you’re an idiot if you don’t locate it close to the centre of town and the hotels and motels and the railway station. Do you really expect people who want to hire a car to drive a car (or muck about with taxis or other transport) to get to you?

Or at least you should make it clear in your advertising that you can pick your customers up. That was how Coastal Car Rentals, a small mob located not too far from Hertz, won my business.

They were much more relaxed than the big companies, anyway. Run by a bloke called Gary and an offsider who may or may not have been his brother, they seemed to say “No worries” an awful lot, and that nicely summed up their attitude to the whole transaction. They picked us up from the hotel, skipped joyfully through the paperwork, and sent us on our way with no troubles. (And the next morning they took back the car with no fuss, and dropped us back in town. “No worries.”)

We drove west initially, to the Tower Hill reserve, to get acquainted with some nature. First we had a look around the Worn Gundidj Visitor Centre, which highlighted Aboriginal culture. I came away with a rather nice t-shirt, and managed to set off the hire car’s burglar alarm while dropping it off before our walk. This became a pattern for the following 24-ish hours — it would blare its false warning of car thieves several more times before we handed it back.

Then we set off on a walk called Journey to the Last Volcano, rated as one hour of moderate walking. Strolling along, watching out for emu poo was quite fun. There was a fair bit to see (I mean scenery, not poo), though the emus themselves kept their distance. After some climbing, which for me stretched some muscles I’d forgotten I had, we came to the extinct volcano’s crater, and walked around the rim. There was a good view of the surrounding countryside too.

We headed back to the car, and thence back to the hotel to recharge the batteries. Both the human batteries and the one on the camcorder. Then off to Cheeseworld we went.

Cheeseworld is a terrific idea. A museum, restaurant, shop, and cellar devoted to all things cheesy. The problem is that overall (just like in ’98, in fact) it’s a tad disappointing. It sullies the cheese theme with perhaps just a tad too much other stuff. Perhaps they found they could not live by cheese alone, but the range of cheeses is also slightly disappointing. 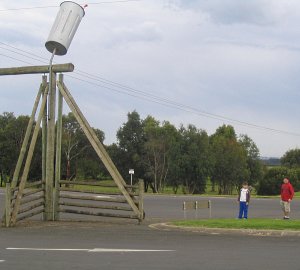 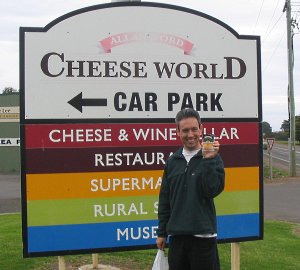 Nonetheless, we had lunch there, including huge milkshakes, and while waiting for the 1:30pm cheese tasting looked around the museum — which to be honest had a touch of the Pissweak World about it.

After enjoying a few cheesy samples, we bought a packet of delicious chilli cheese and some white chocolate fudge and headed further east, along the Great Ocean Road.

The intention was to look at some of the highlights of the GOR. The beauty of doing it “backwards” from Warrnambool is you don’t have the long long drive from Melbourne to get to the good stuff.

So, in no particular order, we took a look at the Bay of Islands, London Bridge (now apparently officially London Arch after bits of it fell down), Loch Ard Gorge (where the ship of the previous night’s tale was lost), the Bay of Martyrs and of course the Twelve Apostles (even though there’s only eight now).

Most of these weren’t particularly busy, but the Twelve Apostles was bustling with fellow-tourists, in cars, buses and even helicopters. It’s all got so big that since my last visit, they’d moved the carpark and built a big new toilet block well away from the cliff face, on the other side of the road, connected by a pedestrian underpass. I assume the Apostles are pretty much the end of the day tour route from Melbourne, as it’s a pretty long drive, and from there they turn around and go home.

One notable thing at many sites was the use of signs reminding drivers to stick to the left hand side of the road. I suppose it’s not beyond the realms of possibility that some might need reminding. 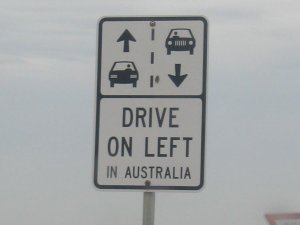 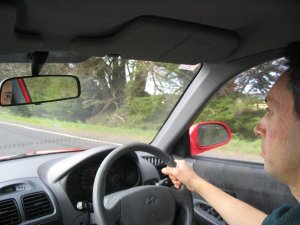 Everything was, of course, quite spectacular. And as a bonus, unlike last time we had been there back in ’98, it wasn’t freezing cold and blowing a gale.

We headed back to Warrnambool, stopping at Peterborough to get some postcards and a newspaper, and somewhere in the middle of nowhere where I did one of those pan shots of the road and a remote CFA station, while two cows looked-on suspiciously.

On Trish’s recommendation we dined at the Bojangles pizza restaurant, which was excellent, though the waitress inadvertently caused some dissent by giving the kids copies of the Kids Menu rather than the adult one. They decided they were hungrier than that, and ordered a (small) adult pizza each. Very tasty.

Then it was back to the hotel for a few cartoons on the Simpsons Channel — aka Fox 8 — before a well-earned bedtime.

That “DRIVE ON THE LEFT IN AUSTRALIA” is hilarious, I have seen it before. I went to Bojangles, not bad food.

I thnk you may be a bit harsh describing owners of hire car business as “idiot[s] if [they] don’t locate it close to the centre of town”. CBD real estate would generally be too valuable to make economic sense for that type of business. In my experience most hire companies are more than happy to drop off and pick up from central locations, even if they can’t afford to position themselves right next to each hotel.

But Altissima, only one business advertised that they’d do that.

I enjoyed driving in a Hyundai when I was in Canberra.

Glad you had a good time, Daniel. It’s always nice to escape the rat-race of Melbourne.

The last time I saw the Twelve Apostles, we gingerly stood on the edge of the cliff. I am sure there weren’t platforms, just a muddy area to park the car.

The “Drive on the left in Australia” signs are due to several overseas visitors having fatal car/motorbike accidents from admiring the view so much that they drifted to the wrong side of the road.
Here endeth the lesson.
Looks like you had a great time, great photos :)

I saw these signs on my first trip to Australia in 2005.

That emu poo looks too big to be from a bird! Ok I know emus are big birds but it looks a lot like cow poo. I’m not disbelieving you. I’m just amazed by the size of it.

I try to make an effort to visit those natural attraction that attract a lot of tourists on a weekday. On a weekend, there being so bloody many people around it spoils it.

I prefer taking in the scenery alone without having 50 people doing it around me, plus a bunch of tourists driving slowly around the nearby road.

Altissima, what Josh said. If they’re not in the CBD, they should advertise they’ll pick up and drop off.

Mike, definitely no cows around!

Somebody, yeah that’s a good idea. Makes no difference to overseas tourists, but you’d probably get less local tourists by going on a weekday. (Mind you Cup Day weekend a lot of people, including myself, take off the full four days.)

“…though the emus themselves kept their distance” …then they are not the same vicious emus that lived at Tower Hill when I was growing up!

Glad you enjoyed dining at Bojangles! (Apart from the menu issue…) I would have HATED to have read a blog entry that went something like “Trish recommended we eat at [insert restaurant] and we spent the next day in the bathroom with food poisoning”! (Not that I’m suggesting you had a lucky escape or anything… Bojangles is definitely good and not the local health hazard! I wouldn’t have sent you there…) ;o)

Astute observations of Cheese (Pissweak) World! It is at its best on the ACME Field Days… However, now you can buy ‘Warrnambool Cheese & Butter Factory’ butter and say you’ve been where it was made!

I’m sorry; I seem to have missed the mention of the Dirty Angel…? ;o)

On emu poo looking like cow poo…
I have vague memory that they might sometimes graze cattle in the Tower Hill park, so maybe it isn’t emu poo… Did you actually see the emu poo the poo? Maybe a cow pooed the poo?

Actually I’m on the lookout for Warrnambool cheese and butter… the chilli cheese was terrific, and I definitely want to find more of the fudge. After thinking I should bring some fudge home with me, I looked in the confectioners in Liebig Street, but they didn’t stock it.

Didn’t see an emu leave a deposit, but there was a lot of it around… and I’ve seen cow poo before, and to my mind it looks different (with a wider diameter, for a start).

Josh and Daniel, I’m just saying that even if they don’t specifically advertise the fact, I think it is normal practice for Hire Car companies to drop off and pick up on request from hotels in major tourist areas and cities. All ya gotta do is ask.

Maybe they do Altissima, but it’s far from obvious, especially to someone like me who doesn’t hire cars very often (maybe once a year). For instance Budget has an extensive FAQ, but they don’t appear to mention it. Maybe it varies from branch to branch.

The company I went with won my business by advertising the pickup service. If I were running a car hire business that wasn’t conveniently located, I’d certainly offer pickup, and I’d be shouting about it.