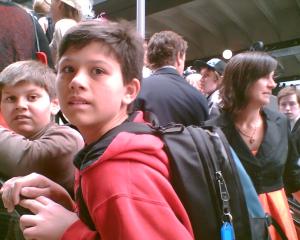 After mixing it with the race-goers on the train and at Southern Cross station, the 1pm train to Warrnambool left right on time, with only one catch: an old bloke who reckoned he should have one of our seats. We compared tickets — my handwritten one from Bentleigh station vs his more authoritative-looking one courtesy of V/Line’s computers. Neither of us were wrong. No matter, there were spare seats, so he found one and happily settled down for the ride.

A lady with a huge psychology textbook got on, also querying the seats. Sigh. She too found another spot to sit, though a little later this caused more confusion when someone else with that seat turned up. And at each station, the conductor could be heard reminding people that this was a reserved seat service and that people should please sit in the seats written on their tickets. Well, we couldn’t all do that.

In due course the conductor arrived and took a look. Indeed, apparently multiple people had indeed been allocated seats 80 and 81 of car B. (A little later the third double-booking also showed up). The conductor checked her manifest for car B. We weren’t on it. Sigh. She blamed whoever took the booking, and suggested we check the return seats at our destination.

The train rolled on. Either the cars on the Westgate Freeway were going slowly, or we were going fast. I think the latter.

The snack bar opened. The old bloke got a chicken burger. It looked pretty horrible, and given he had only just got out of hospital, I wondered if he wasn’t tempting fate. We’d eaten superior chicken burgers at Nando’s just before we’d got on the train. But the kids and I did get some train snack food, coming away with junk. Delicious, but junk. A later foray was more successful, coming back with a rather tasty slice of fruitcake.

Apart from eating, a variety of time-passing mechanisms were employed, from books to iPods to Nintendo DSs to gazing out the window at the passing landscape. But I enjoyed the trip more than driving — in my book, 3 hours on the train is better than 3 hours on the road.

After rolling into The ‘Bool just after 4pm, we quizzed the booking office. It appears the bloke who wrote out the ticket made an error, writing car B when it should have been car C. Ahh, that explains it. We got re-issued tickets out of the computer for the ride back.

We loaded up with our backpacks (1 x big, 2 x small) for the walk up the hill to the hotel, the very silly named Best Western Olde Maritime. It was rather nice though — the boys particularly liked the multi-level room — and ideally located for the station, Flagstaff Hill, the shops and the Adventure Playground. 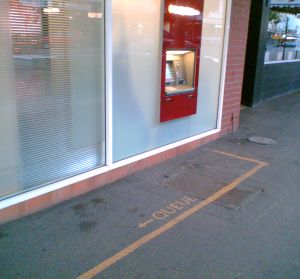 A quick run for supplies was in order: negotiating the many roundabouts, in and around Liebig Street we found a bank machine (and noted the Warrnambool way of marking out the queues for them — why they don’t do that elsewhere is beyond me), and a Coles to buy some snacks and, following Eva’s advice from last year, breakfast supplies. Why bother with having to shower and dress and pay exorbitant amounts for hotel breakfasts when you can buy a few bowls and spoons and fruit and cereal for a fraction of the cost, and eat in your PJs?

Then we headed for a brief visit to the Adventure Playground. That was what we’d really come for, and over the following days, rain or shine, we spent a great deal of time there, riding flying foxes, slides, merry-go-rounds, as well as other equipment which I have no idea what to call. But this was only a quick go, as we had an appointment up the hill.

We were booked into the Flagstaff Hill maritime museum dinner and evening show. The dinner was in the adjacent restaurant, and then we got Shipwrecked.

It starts with a video presentation introducing the Loch Ard and some of the passengers and crew, then a walk in the darkness through the village, holding lanterns. Very atmospheric. (For wimps or those with limited mobility, you can get a ride down in a wholly non-atmospheric carnival ride train thing. Bleuch, you miss half the experience. I thoroughly recommend the walk.)

Then they seat you down at the bottom of the village, facing the lake, and project onto water the story of the Loch Ard’s sinking on the 1st of June 1878, and the only two survivors. A terrific presentation, which had the kids impressed at the special effects.

I have my doubts about how “world-famous” the Loch Ard peacock is, but if they’re right about it being the country’s most valuable item recovered from a shipwreck, it was amusing to hear our guide noting that as a junior employee several decades ago she used to casually dust it off each day.

Anyway hopefully we all learnt some history. I was impressed that the two on-site lighthouses aren’t just for show — they are actually operational, and still used as navigation aids.

Flagstaff Hill was great stuff, and after that we headed straight to bed for a well-earned rest.

10 replies on “Double-booked on the 1pm”

Any significant differences between the rural ‘Bool Coles and the average Melbourne one?

How was the Flagstaff dinner?

I can never work out why so many country towns have roundabouts in the centre of town. Maybe the locals have an aversion to traffic lights…

Sounds like you and your kids had a great weekend Daniel, Nandos is good chicken. Between Warrnambool and Port Fairy the coast is ridden with shipwrecks and the history is amazing. Did you go to Port Fairy at all? That is definitely worth a visit.

Breakfast does add up especially when on holidays. You experience that everywhere you go, so buying fruit and cereal is a great saving.

I did not know some V/Line services had reserved seats, on the Bendigo-Melbourne service I caught a couple of weeks ago on a VLocity train you could sit anywhere and the conductors were great. V/Line service is great and takes all the worries of driving away.

…as well as the worries of privatised public transport (unless Labor win the next election). ;)

Reuben: It was a Coles. About the same, except it has virtually no signage on the street it faces onto. Dinner was good. Do many country towns other than Warrnambool have lots of roundabouts? I can’t think of any others that do.

Every V/Line service that goes beyond the commuter belt has reserved seating.

Wow when my mum took me to Warrnambool by train in the early 90’s we stayed in exactly the same motel!

No? Virtually everywhere I can remember had a roundabout in the highway; I remember reading somewhere that VicRoads don’t employ many people outside the main centres – so they don’t install technician-dependent traffic lights.

Some towns may have the odd roundabout, but I can’t think of any with as many as Warrnambool. But they (and other towns I’ve been to recently) also have traffic lights on the highway.

Near Queen Vic Market is an ATM with the queuing marked out, very civilised.
The Shipwrecked show looks great.

Long time, no country for me.

…Coles has virtually no signage on the street it faces into because it has only just finished the refurb, I think.

… I’ve always been told that round-abouts are cheaper than traffic lights, that’s why W’bool has so many (and because drivers just can’t be trusted with a standard intersection with ‘Give Way’ or ‘Stop’ signs…) I affectionally think of Warrnambool as, amongst other things (ie. my home town), the city of round-abouts (like Adelaide is the city of churches… actually, Warrnambool has a lot of them too!)

Glad you loved the adventure playground. Say it like a local… Lake Perrrtobe! Like I said to you, the REALLY good stuff got taken down years ago when people started getting all litigious when they hurt themselves…

Also very glad to hear that Flagstaff Hill is still a great place to visit. I must make a point of taking Peter to the ‘Shipwrecked’ show next time we visit my folks…