Now THIS is car culture. 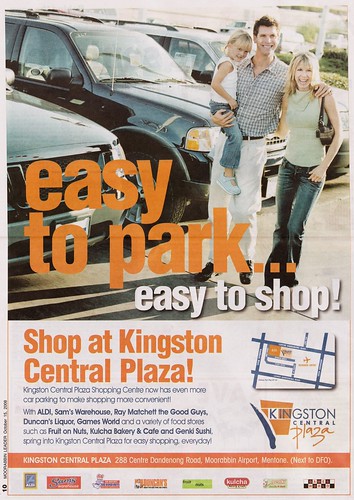 Come to Kingston Central Plaza! Bring your hulking great four-wheel drive! In fact WE DON’T EVEN ALLOW compact cars in our car parks!

Yes, we’ve built a shopping centre just for you, where we wanted it, on cheap land. Why stick to the designated activity centres in the Melbourne 2030 plan when you can build on federal airport land and bypass all that? Good planning? Pah!

Of course, we’ll be in deep crap when Peak Oil comes, but until then, come on down and spend up big!

You know, if airports want to develop land, that’s fine, that’s fair enough. But it should be re-zoned to come under the appropriate state planning laws. Having the Federal Transport (eg Airports) Minister approving these big developments, with no knowledge or regard for the planning principles laid down for the surrounding city, is ridiculous.

They clearly do not have their priorities right!

One day – hopefully not too far into the future – we’ll all be looking back at ads like this and shaking our heads “what were we thinking?”. Some already do that. :-)

The ad looks like it was assembled from the std. marketing scripts – ‘big car, easy shopping, perfect family, big smiles’.

Like the laissez-faire financial system that was predicted to one day fall, surely our days as a society of consumers are numbered? I saw it recently described as a ‘culture of dissatisfaction’.

Actually if you look closer at the photo it is not Australian, and it looks like it is actually from a car yard. Check the window of the rear-most car, with the spec sheet in the window.

Hey well spotted Stuart. (Click through to view the picture on Flickr, then you can view it at full size to see it much bigger.)

The other thing that occurred to me is that the vehicles are all parked so close together it’d be difficult or impossible to open the doors. “Easy to park” indeed…

And flared jeans are so last season!

Stuart probably already spotted this, but looking at the fullsize image, the steering wheel in the middle SUV is on the left hand side of the vehicle.

You are of course right, Daniel. But remember, this is but a minute fraction of the problems with planning in this state.

A good case study, regardless.

I won’t shop there, it’s well located for shopping there, but I refuse to spend my money there because of the lack of planning.

There is a very similar situation at the DFO at Essendon Airport. The nearest public transport is the 59 Tram at Keilor Road, which is approx 1km away. Even the car access isn’t good, because there is only one entrance/exit

Though I still think the Perth City Council’s 1990s slogan ‘Your car is as welcome as you are’ (for the CBD) beats this by a bonnet.

Offices, gyms, service industries, kids party venues, clubs etc do not need to be built as they are industrial or bulky goods stores, but many of them are, with corresponding poor transport access (and difficulty in providing same, especially fixed rail).

Even op-shops are deserting rail centres; Mentone’s new Vinnies is opposite Bunnings on the Highway instead of near the station.

Melbourne 2030 is largely an al-fresco policy; it likes galleries, coffee shops, art schools and small architectural practices around railway stations. It does not address the areas outside the activity centres, even though it is in these areas that the future of activity centres is determined.

Cafe-style activity centres are not the things ordinary people need to survive, and when a centre gets too affluent (eg Elsternwick – more cafes than fruiterers or hardware stores) there is a loss of amenity to most. Elsternwick looks thriving enough, but you still need a car for hardware items (for example).

Whether it’s the light industrial jobs, the supermarkets or the larger stores these are being built or relocated in the exurbs. There is almost no medium or largish hardware store near a railway station for instance, yet this would be a more productive use than Park & Ride. Werribee is an honourable exception, though pedestrian access is relatively poor.

Frankston CBD is another example. Dimmeys has downsized dramatically and is hardly bigger than the average $2 shop. Spotlight abandoned the CBD last week, moving to be near Bunnings.

The main factor that influences the vitality of activity centres is the development that happens outside them and almost every railway-based centre has a companion ‘edge city’ or ‘light industrial’ development that’s growing faster (Moorabbin a failed centre and a bigger flop than almost abandoned Laverton given the plans for it in the ’50s).

For all the rhetoric about ‘diversity’, Melbourne 2030 has pretended that ‘bulky goods’ and ‘light industrial’ don’t exist. Such developments, based on unwalkable streets with little transport, continue unabated, yet it is these that determine the future of the so-called ‘activity centres’ more than a few street trees or ‘feel good’ community arts projects.