A while ago I did a little digging for the purposes of quantifying the audience for different media, for a discussion within the PTUA about how many people see which outlet. I’ve recently skimmed through and grabbed some new figures. (Obviously it’s not just about the raw numbers — the demographic of the audience is important too.)

Local newspapers cover areas of varying sizes. Their circulations vary from about 10,000 upwards, with some of the bigger ones having circulations of well over 100,000. The Melbourne Times is 137,000, for instance. Being free papers delivered into residents’ mail boxes, readership perhaps a little harder to nail down.

The Herald Sun dominates the Melbourne newspapers (though The Age apparently does much better in the “AB” demographic). The free MX commuter newspaper has a higher readership than The Australian or Fin Review. 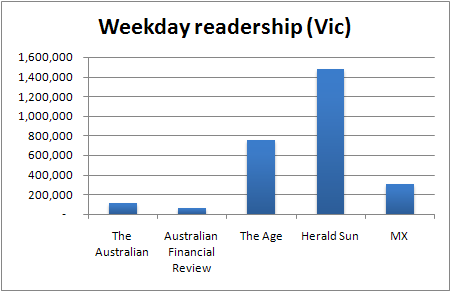 Sources: Fairfax, News Ltd. AFR and The Aust are estimated from national readership figures. The others may include a small number of people who read them interstate.

In TV, at 6pm it’s a battle between Channel 7 and Channel 9 news. At present in Melbourne, Channel 7 seems to have the upper hand, though it seems 9 often outrates it on Sundays, and sometimes on other days. But the ABC also does very well at 7pm. A full set of figures is a little hard to get from free sources, but here are some gleaned and estimated from information I’ve found online. Bear in mind they vary widely from day to day — this is just a sample from one day. 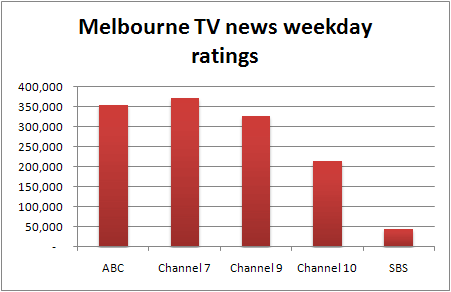 Radio is of course all over the place, as they have many news bulletins per day.

And the future? I’ll leave my theories on the MSM for another time.

3 replies on “How many people?”

I avoid the commercial TV shows on principle, but sometimes…when I’m on form, my conscience is not fully equipted to bear the burden of a 20 minute train journey so the MX must be deployed.

I enjoy reading the Herald Sun and watching SBS (best shows on TV like South Park). I aslo read the age a little bit and the Australian on the rare occassion. Commercial TV is being dumbed down a hell of alot. I usually pick up an MX on the train if my iPod is out of power.

I think some of the stats can be rubbery and distribution can be different from sales or readership.

A coffee shop near DFO has a 70c Age deal going. But does one really want to read something the size of two tables when having a drink? No, the only good place to read a broadsheet is the floor! Otherwise only a minority of the paper can be comfortably read.

Then there’s other way below cost deals, eg cheap subscription deals to uni students. Plus chances are if you go to a weekend expo at Jeff’s Shed you’ll get a kilo of Age or Hun in a bag. OK if you can be bothered saving it for the ride home, but a bit of a burden to carry around especially if stalls are also giving you handouts. I believe Crikey had an item on this exposing these stats about a year or so back.

Added to this are the sectional users – ie property buyers, car buyers or job lookers. Do they always read the other 800 grams?

Perhaps one thing the papers can take solace in is that ‘the people that count’ all either read them or are made aware of items relevant to them or their interest.