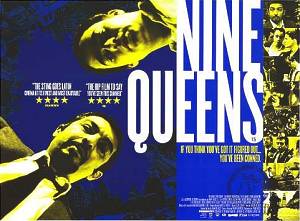 Ever see the film Nine Queens? It was very enjoyable Argentine movie about a couple of conmen. I’m not sure where my copy is at the moment, but anyway…

Towards the end it’s got a scene where a major bank goes bust and panic ensues as people try to get their money back.

At the time, I thought that was a plot device that would only work in a South American movie.

Well, maybe before this morning, anyway.

ABC Radio has a book reading on Sunday morning called Spies Like Us. It made mention of a run on banks in Hong Kong in the sixties. Britain flew out millions of pounds so that everyone who wanted their money could withdraw it. Once people realised that they could get their money, within a short time the money was all put back in the banks.

There were runs on banks in HK in the late 80’s (or early 90’s) too. Can’t remember why it happened, just the pictures of lines of people (outside of Standard Chartered?).

Same happened in Argentina a few years ago.

There has been at least one bank in Australia that collapsed as a result of a run. This was the State Bank of NSW (name from memory :-) which collapsed in the early ’30s after a rumour started that Jack Lang was going to gut the money from it for state finances. The rumour was fanned by the conservative state opposition, a run started, and it had to be taken over by the Commonwealth.

A number of credit societies have collapsed after runs. Pyramid was the most recent, but there were others in South Australia. In these cases there were good reasons why they collapsed.

Of course, there were also the Melbourne bank ‘reconstructions’ of the 1890s in which various major banks closed their doors, forcibly converted their deposits into capital which couldn’t be traded for several years, and reopened as ‘new’ banks. This was to avoid runs with the resulting collapse. In this case the banks protected their shareholders at the expense of their depositors.

Any bank (or similar institution) is vulnerable to a run as they borrow short and lend long. If a sufficient number of depositors want their money back at once, no bank will have sufficient cash on hand and will be forced in liquidation. The only defence is to borrow cash from other banks (or the government). But, of course, this only occurs if the other institutions are confident that the bank suffering the run is actually sound.

This is very topical as events over the past week have shown that governments around the world were/are very worried that a run would start on a major bank, and that the other banks would NOT come to the rescue…

Try reading “Two Centuries of Panic” and its sequel “Bold Riders” by Trevor Sykes. These two books are a history of major corporate collapses in Australia.