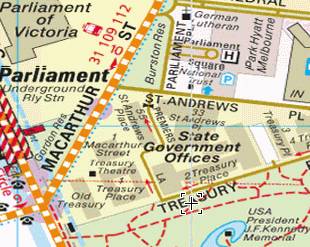 Most unexpected question from the media pack at 1 Treasury Place this morning: Should Premiers Lane have a possessive apostrophe?

(That Brendan is a joker.)

I gave a mock answer for that one, which wound up proceedings, and a quick discussion followed on the merits or otherwise of punctuation in street signs. As it turns out, the Guidelines for Geographic Place Names says apostrophes shouldn’t be used, or that the possessive “s” at the ends of words shouldn’t be included.

And of course we were never going to get a lightning bolt in ACDC Lane.

Oh, the real topic of discussion? Congestion charging. It works in other cities. London is obviously the shining example, where the funds have gone into public transport — primarily buses — and usage has jumped. Provided you give people a viable alternative to driving into congested areas, why not encourage them to use that alternative by charging them extra?

Here, the government has ruled it out. I suppose they know it’d be unpopular. But the thing is… it works.

Congestion pricing “has worked around the world in about 100 different places, 100% of the time.” — Martin Wachs.

As with most transport issues, it’s a political problem, not a technical one.

Like apostrophes in street signs, I suspect it’ll never happen.

8 replies on “Apostrophes and congestion charging”

Flirting with the media eh Daniel? What next?

Re congestion charge, I heard, and sorry can’t remember source, that after the initial success in London, it is now not working so well and the car numbers are building rapidly.

An ABC reporter wanted to park for three hours in the city and he realised it would cost him $34 I think. Ensure that all parking, including on street parking is as expensive, then you almost have a defacto congestion charge.

Andrew, yeah I did a bit of reading on it. What appears to have happened is that traffic speeds have slowed down again back to almost the level of before the charge was introduced. But that’s not entirely because of growing traffic levels; it’s also due to more bus lanes and calming measures. And of course it’s true that almost inevitably traffic grows to fill the space available, so maybe it’s to be expected. But even if traffic levels got back to the earlier levels, if the PT (especially bus) patronage holds, the end result is more people travelling into the centre of London, but a higher proportion of them coming by PT.

I heard Brad (the ABC reporter) talking about this too. My question would be: why did he want to drive into the city, rather than travel by other means? We know some people have to drive, but it wasn’t clear why he would need to. (I didn’t catch if he said he ended up doing so and paying, or not.)

You’re right though, the parking levy does contribute to this, and probably helped in some part to move people onto PT since it was introduced. Problem is the revenue has gone to the wrong places (eg the Tourist Shuttle Bus).

the trouble is that even if the entire ‘x’ dollars generated from congestion tolling are diverted to PT, eventually the core PT budget will drop by ‘x’ and we will be no better off but will have a handy new tax.

Not exactly on topic here – but I thought related and interesting.

Heard on Radio National yesterday – someone talking about how they’d experimented in the Netherlands with removing all traffic signs from roads (in specific areas.

Results? Speeding was down, drivers more courteous, roads were ‘calmer’ and accidents reduced (in some cases down to zero).

Reasons? Drivers needed to take more care since they were unsure of the upcoming ‘road landscape’, they needed to make eye contact with other drivers at junctions to work out who was going to do what, they no longer drove with the expectation (as they had in past) that other road users would (supposedly) follow the road signs and behave in an appropriate manner.

That point is apparently key in avoiding accidents, since when you have (for example) ‘right of way’ at a junction, you tend to take that as an indication that you are likely to be safe in taking it and so you proceed with slightly less care than you otherwise would.

The eye contact was a key part of the scheme, to try and get drivers to ‘see’ each other as ‘people’, not as other ‘drivers’.

They said the scheme may not be directly transferable to Australia because of cultural differences here. The example being that in the Netherlands, in a car with cycle incident, it’s the car driver who is first under suspicion for their actions, where as in Australia (the commentator said) it’s the reverse.

Interesting idea, when one considers the campaign to install MORE signs and warnings at train level crossings in Vic, because of the high accident rates.

True John; even now the govt is claiming that the money got spent on PT, even though it really went into consolidated revenue: Revenue from the levy is directed to congestion hot spots and investments in public transport, Mr Pallas said, with $5 million going to Melbourne City Council. — Age.

Tony, was it this programme on Counterpoint? I’ll have a listen, but I’m not entirely surprised. Every time I go into Yarraville, where all the streets are too narrow for cars to pass each other, I am slightly surprised I don’t see any accidents. I know when I ever drive there I am extra careful.

Yes, Daniel, that’s the programme – the piece starts 25 minutes in.

Melway have used a lightning bolt for AC/DC Lane in the close-up CBD map. It’s not in the larger scale Melway maps, but it’s definitely there in the two-page blue one. I was so happy when I first saw it.