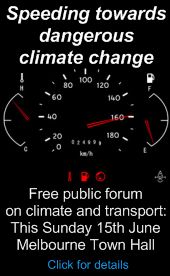 I just about punched the air when I read Elliot Fishman’s great opinion piece in today’s Age: RACV heading down the wrong road.

Elliot highlights some of the things I’ve pondered recently, such as the RACV’s 2004 spectacularly wrong guess on oil prices, as well as pointing out the flaws in their calls for lower fuel taxes and encouraging biofuels.

The RACV has deceived its members by constantly claiming that petrol will not rise very much higher than whatever it happened to be at the time.

In the middle of 2004, for instance, it claimed oil had peaked at about $US44.50 a barrel and we would not need to pay much more than $1.08 a litre. With oil now around $US130 a barrel and the price at the pump exceeding $1.60, Victorians have a right to ask why the RACV got it so wrong.

Elliot, as well climate-policy analyst David Spratt, transport energy efficiency expert Dr Patrick Moriarty, and some guy who is not called Damien Bowden will be talking at a free forum this Sunday at Melbourne Town Hall.

(I was wrestling with some slides last night in Powerpoint. Hopefully I’ve now persuaded it that I really honestly don’t want it to check my spelling with the US English dictionary.)

8 replies on “RACV heading down the wrong road”

I was reading that article last night and though ‘that Damien Bowden guy would like this’. :-)

In fact, I half expected to see your name on the byline/credit.

Very true. But remember, the RACV don’t care about commuters. At least they’re consistent about it.

On another note, I thought I saw you, Damien/Daniel at a greengrocers at Ripponlea this morning at around 9am. I wasn’t sure it was you, so my shyness got the better of me.

Good luck. I am sure you will speak well.

Hmmm, another reminder about our expiring RACV membership has arrived in the post. I’m finding harder and harder to justify giving them my money so they can go and use it against my interests…

Reuben, if your watch was slow and it was actually closer to 10:15am, then yes, it was me.

A few comments – late as usual, but I only get my “input” from Daniel late Monday night when my TCWF arrives …

Before anyone suggests that I’m making fun of the plight of folk forced to pay increasing prices for fuel while their incomes stay the same, let me explain that I’m on a very low fixed income [I think it’s recognised by the U.N. as below the poverty line, but Poverty Lines are extremely elastic so it might not be]. So increasing petrol prices take a very hefty bite out of *my* weekly budget too! Also, I’m a wheelchair user so I can’t trust “accessible” Public Transport to be where I need it when I need it or to be able to take me where I need to go when I need to be there, so I *must* use a car – with all its attendant extra costs.

I realise it’s only a token at the moment and you’ve probably talked about it before when in your PTUA “hat” – but what if it works? [I think the first few links lead to the most informative pieces.] And what if every city had lots of them? Lots and lots and lots …