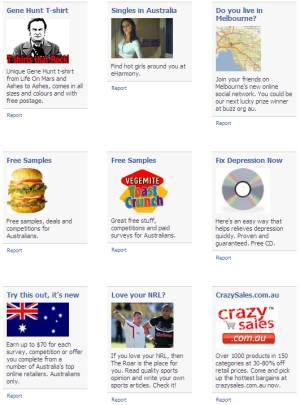 Plenty has been written about this before, but I’ll put my oar in.

Facebook knows lots about you. Most users key in a bunch of stuff about their hobbies, favourite music, TV shows, all that kind of stuff. They know (roughly) where you live, how old you are, often your marital status, your interests.

So why are their adverts so hit-and-miss?

Sometimes they’re spot-on. I’ve seen Life On Mars t-shirts advertised, with pictures of Gene Hunt proclaiming some particularly amusing line from the show, such as “You’re surrounded by armed bastards!”. I’ve clicked through, and seriously considered ordering one. Well, until I saw the price.

But most of the adverts are useless. Hold ’em poker — is there anything in my profile that suggests I’d be interested? Meet hot singles — Facebook knows I’ve been in a relationship for almost five years. Surely it isn’t predicting some kind of seven year itch coming up? Earn money from surveys — did I click on a “I need cash” option somewhere in my profile?

If computer systems are going to store a bunch of personal data about you, you’d think they’d at least make the effort to use it in a sensible way — not to mention if they get it right, they can make more money.

Or maybe I shouldn’t complain. At least the way things stand, I can happily ignore most of the ads that appear.

7 replies on “You snore, you need money and you need to meet more girls. No wonder you’re depressed.”

Quite frankly, I’m more than happy knowing that facebook is not using the info I offer for the benefit of my friends and acquaintances in order to target me with ads I might actually pay attention to.

There’s a way for advertisers to build a *really* *really* good profile of you., secretly..

The online advertising industry has kept the promise of targeted advertising about as well as a politician keeps an election promise.

I bitched about this 9 months ago on my blog…

Forget looking in my FaceBook profile. How about having the ad-picking algorithms on some of the major ad networks look at the User Agent string your browser provides and not show ads for Windows registry cleaners to people very obviously using Macs?

How about that? One of the easiest ways to avoid showing someone a useless ad, no cookies or database of personal information needed, and they still can’t even do that.

I think part of the privacy policies are meant to prevent too much information being made available to advertisers. Of course, then they had that silly experiment with the ‘recommended’ stuff (“Your friend is playing game XX on Konquerer, why don’t you play it too?”), so they may be a little gun-shy at the moment.

This is just playing the law of averages. Far more people want to meet hot singles — even if they are in a relationship — than buy Life On Mars T-shirts. It’s much more profitable to target a group of ten million people and pick up 0.01% of them than to target a group of ten thousand people and pick up 1% of them. This is why most of the ads you see are for things large numbers of people desire. They know you’re probably not in that group, but they don’t care, because plenty of other people are.

*laugh* Guess what, mate. The fact that you wrote the bit about snoring means that now, on top of your page, I get Google ads about… snoring! And, to make it worse, the fact that I mentioned the word in my comment has probably increased the chances of it turning up in the ads on your page. Snoring, snoring, snoring, snoring. There you go! Be glad I didn’t write anything about Paris Hilton videos. Whoops, too late. Now I’m just wondering if this comment gets past your spam filter.

Just had to pop in to tell you that I just had an ad for a Chinese wife pop up on my Facebook page… What *have* I put in my profile that I can’t remember typing!!!!?? Or has a balding, middle-aged, socially incompetent man (just to generalise horrendously) logged in and been using my computer to surf for a bride..? lol…