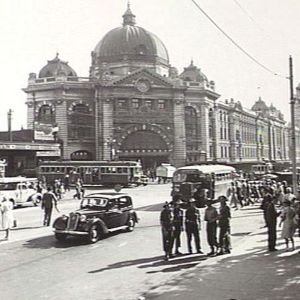 There were a lot of families on the trains last week. Many off to the Show, or the Fed Square Pixar exhibit, or the Thomas Live shows at the Tennis Centre.

There’s something that’s pleasing about seeing a bustling busy city railway station (provided there’s plenty of space and it’s not too packed). Be it Flinders Street, Sydney Central, London Victoria, Rome Termini or Amsterdam Centraal, they’re a place to see the diversity of a city’s population, some rushing, some taking it slow.

It’s somehow nice to know that such a station is a focal point and that hundreds, thousands of people have collectively chosen to travel in about the most efficient way (space-wise, cost-wise, and clean) — even if sometimes the providers/operators/government let the side down with train services being inadequate.

(The flipside might be airports, which tend to look squeaky-clean in comparison, while in terms of emissions, the aircraft serving them are utterly filthy.)

The shiny new Craigieburn station opened on Sunday, to the applause of the locals, and contingents of media and gunzels (rail enthusiasts). Alas, like the trains, provisions at the sausage sizzle were sadly lacking. It does have an impressive, mini-Jeff’s Shed-like roof though.

What a shame that in these days of ever-increasing petrol prices and awareness of CO2 emissions, the next rail extension isn’t scheduled to open until about 2021…

(Now, if I can just get Metlink to update the map on their web site…)

5 replies on “All stations great and small”

…and they renamed the Broadmeadows line “Craigiburn” without telling anyone (at least at Parliament).

Spent near 40 minutes sitting on the platform, just assuming the Broadmeadows trains were cancelled/late.

Not much hope then for a train to Doncaster, a train to Rowville via Monash Uni and there are some very new areas that should be serviced. South Morang is an ongoing one. I could not believe last year when I found out about the single train tracks on Epping and Hurstbridge lines.

Tim, I catch a train maybe once every two months, but I was well aware of the Broady changing to the Craigy. It was all over the media. But then I still think of the Paky/Cranbourne line as the Dande line.

Tim, they told people… it was quite well publicised. Mind you they’ve been a bit slack at updating the signage and so on. OK, it can’t all be done overnight, but they could at least completely do the CBD stations quickly.

Andrew, South Morang is the only one scheduled, and that’s not until 2016-2021. Yes there’s single track as close in as Clifton Hill (being duplicated now) and Altona.

Andrew, except maybe for the section between Heidelberg and Rosanna (and Clifton Hill-Westgarth), I don’t know why you’d whinge about single track on the Hurstbridge line. You do know a fair bit of it is rural, right? Cows don’t catch trains.

Somebody in the WWW says… “Cows don’t catch trains”…

We do at Hurstbridge…. But a single track doesn’t bother us – It’s the 5 minute wait at Eltham. Bloody hippies…