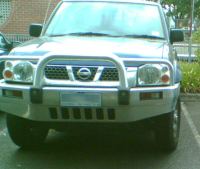 Bullbars have a legitimate use in some rural areas, where threats such as kangaroos and other wildlife can do significant damage to a car and its occupants.

In urban areas though, they’re a menace, significantly increasing the chances of injury and death to other car occupants, cyclists and pedestrians. Given that 90 percent of 4WDs never leave the bitumen, and many of these have bullbars, maybe it’s time that someone invented a strong, yet easily detachable bullbar which could be taken off the vehicle when it’s being used in suburban areas. Have a period of phasing out permanent ones, and then start fining people for using them in the cities.

(Alas I was not quick-witted enough yesterday to get a picture of the 4WD a lady had driven into the tram superstop in Collins Street. It’s times like these you want to go and knock on the window and ask if she’s going to West Preston or Box Hill, show a Metcard and help yourself to the passenger seat.)

why are you so keen on ‘banning’ and ‘fining’ things you dont like.

not very tolerant of things that are different are you.

perhaps we shoudl all drive trabants around ?

Is that you again, “alfred e neumann“? Yeah for some reason I don’t have much tolerance for things that needlessly kill people.

Whether you drive a 4WD does not determine your level of intelligence or ability to drive. The woman at the tram stop could have been driving anything.
Personally, I find trucks inconvenient to drive behind, and they kill plenty of people. But I don’t feel the need to publicy bash the drivers…

Thomas Paine listen here: you’re obviously new. Then Welcome. What is the harm in suggesting authorities ban and/or fine activities i.e. regulate things one believes pose an unnecessary risk or danger? And surely you’ve paused to consider the fact that the vast majority of law-abiding citizens concur with the opinions raised in the forum? And do a spellcheck before you post next time too.

look right look left look right again…..if you dont, a bull bar is not going to make any difference what so ever when you get squished on the asphalt.
Is it safe to comment that as a pro driver i see more accidents involving small LOW FUEL usage vehicles than those menacing oversized, FUEL GUZZILING bull bar, menace to society 4WD’s. Take the blinkers off and have a look around.

Nobody’s arguing that bad drivers don’t come in all types of cars, big and small. But to try and claim bullbars and other factors in vehicle design don’t make a difference to pedestrians and others in an accident is simply false: the studies on factors such as aggressivity are very clear about this.

I find myself torn. On one hand a do believe bull bars should only be used in places where they are actually necessary i.e. not on pedestrians. But I do find Australia’s tendency to ban and fine for everything somewhat frustrating. What has happened to personal responsibility and courtesy toward others. Oops! These are 4WD drivers that we’re talking about – what was I thinking!

The other day I was waiting to cross a train line, as a pedestrian, at the same time as several trains were passing through, so we had a long wait. Quite a few people decided to risk crossing, including one girl in an electric wheel chair.
So I think perhaps we should also ban TRAINS, because then those people with **** for brains won’t get hit. And while you’re at it, BAN EVERYTHING THAT GOES FASTER THAN WALKING SPEED, because that will also prevent those cyclists who delight in riding on footpaths from knocking me over.
Daniel, get a job in government, will you, then you can join them in banning/fining to your heart’s content. And that would give me the push to move someplace I can run my own life…

I’m with you Daniel – get the bull bars off the suburban streets and then get the 4WDs off. Actually, just get the 4WDs off and achieve both. I can’t believe the ads where the city streets turn into rocky mountains and flooded rivers. They obviously convince some people into buying 4WDs Ã¢â‚¬â€œ just in case it happens. Another hate of mine is 4WDs that have the acceleration of a light truck at traffic lights and prevent extra cars getting through, so adding to traffic congestion. I agree with Keating Ã¢â‚¬â€œ tax them off the road.

Simple solution – say they contain fat or cause cancer and you’ll turn this plague around in no time!

people get stabbed to death with kitchen knives.

How about Hybrid cars? (I am assuming they are available in Australia and reasonably priced) How about better driving exams and teaching people how to drive defensively! And Stop, Look and Listen before we cross the street!
Unfortunately we are not going to solve all the problems of the world but it’s fun Bitching about it, isn’t it!!! :):):)