Call me an old fuddy duddy if you like, but for the most part I still like the video and computer games of olde a bit better. Though graphics and sound have leapt forward over the past couple of decades, the quality of gameplay is the subject of some debate.

How playable is a game if you have to read the manual for ten minutes before you can figure out what you have to do? In the glory days of the arcade, it was as simple as: shoot the aliens; climb to the top of the girders; get the frog across the road and river. They needed to get you hooked in the first game, to keep you pumping those 20 cent coins in.

Nowadays they’re all so complicated. Video game pioneer Nolan Bushnell lamented that the designers came up with games that were so complicated they required all your concentration to play — when the reality is, in a bar or arcade, while you’re playing, you’re probably sipping on a drink and chatting to friends too.

He also points out that because striving for technological complexity has driven development costs through the roof, a lot of the innovation has vanished from the games industry, with most new ones being first-person shooting games or driving games.

…if you really look at the games that have been developed for the arcade business in the last five years, you see driving games and you see shooting games, and very little else. With the driving games, sometimes you’re driving a car, sometimes a bike, sometimes a truck, or a snowmobile, but they’re still damn driving games.
– Nolan Bushnell, Edge magazine’s retro gaming special 2002 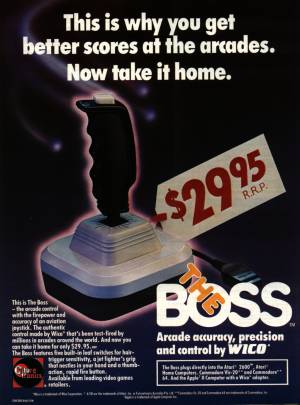 The controls are more complex these days. Back in the olden days it was a single joystick and a button. Maybe two if pressed (Robotron excepted). The standard controller on the XBox has no less than three joysticks, and a multitude of buttons on it. This seems overly complex to me. What game would require me to go in three different directions at once anyway?

That said, the XBox is a heap of fun to play. Midtown Madness 3 is a lot of fun. Some spectacular graphics, and the freedom to cruise around like a maniac, or drive in races like a maniac. Hell, you can even do an Henri Paul and go zooming through the tunnels of Paris weaving around at a stupid rate of knots before hitting a wall, with the only result being some wobbles from the force feedback on the controller.

I’m rationing my game purchases to one per month, which gives me plenty of time to read the reviews and work out what’s good value for money. Next in the queue is Harry Potter/Chamber of Secrets, which looks good. I’ve thought about buying Elder Scrolls 3 (for myself, not the kids, since it’s M rated), but I’m hesitant because it looks rather too addictive, promising to suck away time I don’t have.

So far the only other release I’ve bought is Midway Arcade Treasures, 20 classic games on a disc. Thankfully Midway are happy just to be game authors; alas Nintendo want to be in the console market too, which means barring getting MAME running on it, I will never play Donkey Kong on my Xbox.

Arcade Treasures is something of a mixed bag, and it probably comes down to the fact that some of the games are suited to different types of controls. Robotron, Paperboy and Gauntlet work well. Marble Madness would be better with its original trackball. Joust is hopeless – you need a button you can continually whack to flap your bird’s wings without getting RSI.

But in the comfort of my own lounge room, it’s as good as it’s going to get for now.

Donkey Kong Junior (arcade). The platform game after the one that started it all, with Mario turned badguy. The Game And Watch versions of these games were also great. Hands up who managed to get past 999 points and “clock” them.

Elite (BBC micro). The legendary space trading/flying/piracy/dogfight/exploration game. You have a Cobra Mk3 spacecraft, and eight galaxies to explore. Go do your own thing. Breaking the rules about simple controls, but the concept and freedom within the game was breathtaking. I never did reach Elite status, but I did get to Deadly both on the C64 and the superior (faster) Beeb version.

Gauntlet (arcade). A kind of dungeons and dragons-themed multiplayer game, best experienced (at least for me) in the Fun Factory with three mates, feeding in the 20 cent coins and co-ordinating our efforts battling the ghosts, wizards, Deaths and what appeared to be little kids lobbing rocks over the walls.

Gyruss (arcade). The circular movement of your spacecraft was obviously different, but the frenetic pace, great graphics and sound made this a winner. “3 warps to Neptune”. I managed to get through to Earth on the C64 version.

Impossible Mission (Commdore 64). “Stay a while! Stay… forever!” Brilliance in platform games. Some C64s (including mine) would generate the same map and puzzle every time on initial load, making it easy to finish the game.

Joust (arcade). Flying your buzzard around, jumping on the others. Perhaps the first and only game ever that didn’t have up/down directional controls, but a flap button instead.

Lode Runner (Apple II). Platform game with a massive number of screens, and instead of jumping over your enemies, you dug holes to trap them which magically filled up after a few seconds. And included a revolutionary idea: design your own levels, something later done on such games as Magic Mushrooms on the Beeb.

Monty Mole (Commdore 64). A very cutesy scrolling platform game, with Arthur Scargill and other Brit coalmining strike references. Another one of Tony Crowther’s masterpieces, and one I managed to finish. Other platform games worth of mention include Jumpman, Jumpman Junior, Blagger, Popeye and Thing on a Spring. Undoubtedly 2D platform games were my favourites.

Sim City (PC). The original city designer game, and though less complex and realistic than its sequels, seemed more addictive. Also inspired other related games such as Traffic Giant.

Ultima 4 (Commdore 64). There were many Ultima games, roleplaying obviously inspired by Dungeons and Dragons, but this one had me hooked for many weeks. Wandering around the countryside fighting monsters, finding sailing ships to explore the oceans, through towns and villages and castles trading and talking to people. I wasn’t so keen on the dungeon fighting, personally.

There have been many other brilliant games, of course, including many I’ve probably forgotten and will wish later I’d included.

What are your favourites of all time?

Time To Head Back
8k and a cassette tape . That’s how you make games.

Let’s not forget Tetris.
And you need a version with the Russian theme for the authentic experience.

Heeeeee… just a little before my time… I didn’t get into technology until Nintendo was out.. and even then it wasn’t until Super Nintendo came out (but we got the original). Then we got the computer, and all was well. Though a friend and myself probably pumped about $500 worth of coins (gold) into one of the games at the local arcade… shoot ghoulies. No brain power. If it growls, kill it. If it groans, kill it. If it throws decapitated heads at you, kill it. If it doesn’t die right away, KEEP SHOOTING! My kinda game really. And Sim City was absolitely brilliant.

Man, you just about quoted the Nintendo philosophy word for word. Maybe you should have gotten a GameCube and a copy of Super Monkey Ball. Also, you can put a GameBoy player on the bottom of your GC and play GBA games on it, plenty of oldies there. You can even get an olde time controller (the hori) to play them.

Damned Traffic Giant. I spent $10 on the damned thing at the secondhand game shop opposite Malvern depot then the friggin’ thing refused to work. Then when I finally did get it to work, I didn’t get as much out of it as I did with Sim City, and its descendants SC2000 and 3000.

I was an Otaku in my day, until mum threw the playstation against the wall and cut the telly power lead with a meat cleaver because she called it a “tool of satan” :).

Gods – by the Bitmap Brothers, for the Amiga

Paradroid. The thrill of short-circuiting other robots all the way up to 999, and then plummeting back down into the 300s.

Arkanoid – the Arcade Version. Was fortunate enough to play it at an arcade in upper ferntree gully near my uncles’ house in 1992. Still worked beautifully.

William: Tetris got me in the arcade. Brian, a mate of mine, claimed he had dreams with falling bricks in them.

Agent: Arkanoid is now downloadable onto Nokia Java phones. And Space Invaders too. Must be licensed by Taito.
Traffic Giant was not bad for what it simulated, which was designing public transport systems. The interface was a bit clunky, and the simulation not truly accurate, but it was heaps better than anything else that tried (like the execrable A-Train). I was hooked for a while.

Check http://www.remakes.org/ for lots of remakes of classic games.

Nebulus – that cute lil piggie think with massive eyeballs winding his way up towers only to get knocked into the drink by a moving step.

Journey to the Centre of the Earth – inventive minds did well. I sucked.

Choplifter – Supposed to rescue folk under attack but much more fun squishing them with your chopper.

Attack of the Mutant Camels – I don’t know why I was drawn to this game, but I’ve never quite trusted camels since then.

Oh, there’s too many great games – Cauldron, The Sentinel, Tank Atak, Test Drive…but the most addictive ones were the simplest. You’re on the money, Daniel.

My all-time favourites remain Pac-Man and Space Invaders (both of which, sadly, I was too young to play when they were actually in arcades), though I like a lot of newer games as well. I can’t believe no one else mentioned Pac-Man!

I used to own a Commodore 64 and thought that Mission Impossible (or as Daniel put it – Impossible Mission) was the greatest thing since sliced bread! I played it for hours and hours and finally managed to solve it. I really miss the game and wish that someone would bring it out for PC!

Would recommend renting Morrowind first; I bought it for PC, got turned off by the fog (lower spec machine), got it for XBox (figured specs wouldn’t be an issue) and then found it so hard to get into, I never played it. Felt slow going and non-immersive to me. So yeah, I’d suggest rent first, make sure it’s really your bag. Save game should carry over if you do buy it then. Cost of games these days, you can’t really take chances.

Bubblo bobble – a lot of fun – but even more fun with 2 players….