It’s state election day this Saturday, though many people have already voted:

Anyway, here are some ramblings from me.

1. Think about the issues that matter to you, and look at what the candidates/parties are pledging.

2. Decide for yourself where your preferences will go.

Lower house: Fill every box according to your wishes, not the How To Vote cards. Remember, you can safely vote [1] for a minor party, and not waste your vote, because your preferences will end up with one of the majors. This cartoon explains it nicely.

Who’s who in the zoo

Some of the minor parties you might not have heard of, or might not know where they’re from, or what their key issue is. Many are centred around specific issues. Here’s my brief summary.

There’s another frank and fearless assessment of the micro-parties in this Twitter thread from André Brett, or in more detail on his blog.

This blog also has some good information. And another quicker take from former Fairfax journo Jill Stark.

Or for something with a bit more meat, here’s ABC’s summary.

The PTUA has a scorecard (summary: Greens better than Labor, Labor better than Coalition).

Bicycle Network also ranked the parties this way, and they have a detailed scorecard.

Environment Victoria has a scorecard. They’ve gone ballistic in distributing this in marginal seats. We’ve seen their volunteers at the railway station and in the shopping strip multiple times, and they’re pushing it out on their social media and other channels too.

The latest IPCC report's message is clear. To limit catastrophic warming we need immediate action on *all levels*, no delay, no buck-passing.

Remember this when you vote 🗳

See which parties have a plan of action here & SHARE >> https://t.co/Q70xX4OePx#vicvotes

My view is that neither major party is doing enough – and it’s mostly a Federal problem, not a State one.

At a State level, both sides are playing politics, as one would expect, but at least Labor’s policy of subsidised panels will clearly achieve more use of solar.

The Coalition emphasises affordable power, but given the level of subsidies to fossil fuels, and the emergence of effective large-scale battery systems that seem to be contributing to stabilisation of the grid, I’m not convinced that clean means unaffordable and unreliable.

This interview on Sky News last night is amusing:

Liberal candidate for Frankston Michael Lamb says his party will get the private industry to build a power station in Victoria, if elected, but admits it will be at least partly taxpayer-funded.

…By the way, people that know about this stuff tell me that “baseload” is a crock. What’s important is despatchable power — that can be put into the grid when it’s actually needed.

New battery technology seems to have revolutionised this. You can now combine renewables, whose energy generation varies with the weather, with large battery installations, which together enable power to be fed into the grid to keep it stable as demand and supply elsewhere rises and falls.

This is far better than coal which is near-constant, day and night, except for when they fail. In other words, baseload is not flexible.

More reading: Baffled by baseload? Dumbfounded by dispatchables? Here’s a glossary of the energy debate 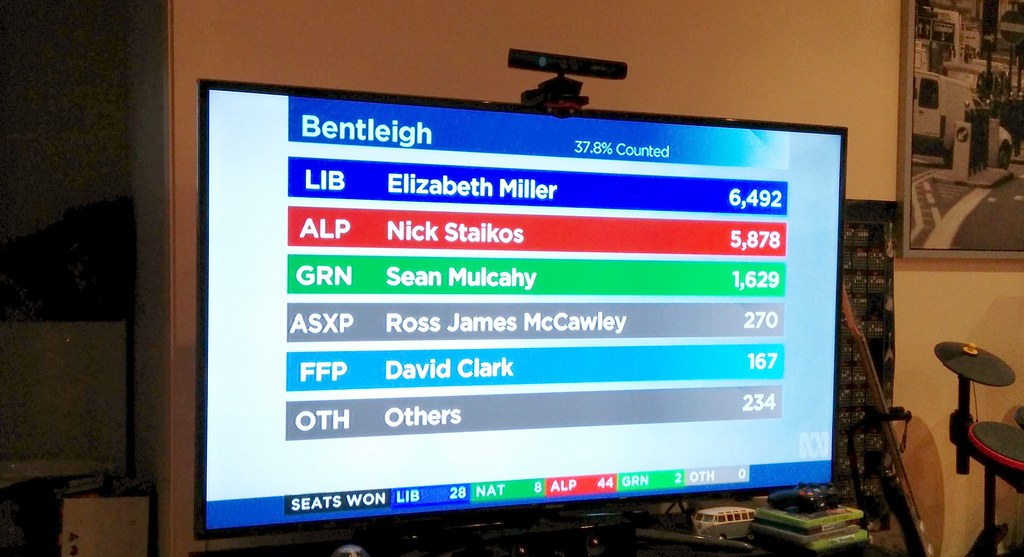 In 2010 we knew the seat was marginal when then-premier John Brumby showed up at a nearby polling booth.

In 2014 we knew the seat was still marginal when I was greeted at the polls by the Labor candidate with “Hello Daniel! Meet Bill Shorten!”

Since then, three level crossings are gone (Bentleigh/McKinnon/Ormond). Labor deserves credit for making this happen, even if it was piggybacking off Coalition planning and funding for the Ormond crossing that had already occurred.

Labor is pledging yet more crossings to remove. The Libs aren’t – they want to do road intersections instead, which is a terrible idea. But they have pledged some level crossing removals. Both sides have pledged Glen Huntly, which more than any other on the Frankston line, delays every train.

Labor’s also pledging a new bus route, from Moorabbin along Tucker Road and East Boundary Road (the connection between them seems a little unclear) to Murrumbeena and Chadstone.

Other pledges, from either side, to fix buses and trams (anywhere in Melbourne) are pretty scant.

If I had to fault Labor for anything, it’s the redshirts affair. What a stupid thing to (allegedly) do, risk everything, and jeopardise trust, for such a lousy return (which they’ve now paid back anyway).

Both sides are pledging upgrades for local parks, schools and kindergartens.

The Coalition is pledging to convert the Dingley Bypass into a freeway, and grade separate road intersections at Warrigal/South Roads and Nepean Highway/South Roads, which risks making them unusable for pedestrians and cyclists, and will inevitably make South Road traffic far worse than it already is.

I personally find the claims about out-of-control crime to be unconvincing. ABC Fact Check looked into the statistics, and that’s well worth a read.

There's more to the story than Liberal candidate for the Victorian state seat of Bentleigh @asherjudah's claim, that crime has risen 58 per cent in the electorate, suggests. New #factcheck: https://t.co/Y14vhJkFfi #vicpol #vicvotes #factcheck pic.twitter.com/mK2AcdNfpk

Pledges from both sides (Labor, Liberal) to replace the scoreboard at Bentleigh Reserve. This makes no sense to me, because it’s only 8 years old. A new fully electronic scoreboard will probably have more capabilities, but the current one appears to do an okay job at showing football and cricket scores. Hopefully the old one can be handed down to another oval somewhere.

If only more seats were marginal.

Anyway, enough of my rambling. Check the parties, policies, pledges, candidates. Know who and what you’re voting for.

If you haven’t already, vote carefully, and enjoy your democracy sausage!

Unfortunately your idea of traffic being “far worse” has no basis and is of extreme bias as with the entire article.

You will never stop people wanting to drive their cars, no matter how many more trains or trams you introduce. The issue is and will always be excessive population and mass migration that is not sustainable.

So, let’s say Greenies (along with Labor) won their opposition to City Link as happened in the 1996 election, can you imagine Melbourne today?

No amount of feel-good public transport would take up the slack for a lack of continuous roads or freeways.

Scribbling down some notes on the parties I came up with very similar points, except for the Transport Matters Party. They do seem to have rounded out policies on most aspects of transport and are brave enough to promote congestion charging among other strong incentives to get people onto public transport and out of private motor vehicles (off the roads). While they may have strong connections to the taxi industry and a platform of limiting the number of hire cars, that only appears to be a small part of their platform.

>You will never stop people wanting to drive their cars, no matter how many more trains or trams you introduce.

There’s plenty of cities where the majority of people don’t own cars. Just look at Singapore, Hong Kong, NYC and even London. Balanced strong investment in both road and rail is whats needed and finally both Labor and Liberal are trying to deliver it. Pity they didn’t get started 10 years ago when interest rates were at record lows but better late than never.

Immigration is decided at the federal level and regardless of how you feel about it even local Queenslanders are moving to the worlds 2nd most livable city in record numbers. Keep up the investment and keep our state moving.

As someone who moved here from Singapore more than a decade ago, I used to want to own and drive cars. The novelty has since worn off and I try to avoid driving when I can help it now.

That being said, (a bit too late now) I was wondering if PTUA offers placards or signs that can be printed and posted that supports public transport in general, not any party during an election campaign. I know GetUp! does this on a federal level.

[…] Daniel Bowen has a useful article about the election, with information on voting, small parties, energy and the environment, and local Bentleigh issues. […]

Not sure that Bentleigh needs a new scoreboard!

Having recently been on holiday in Vietnam, the sort of organised chaos that traffic was in Ho Chi Minh City and Hanoi was really interesting – but it does seem to somehow work. A lot of motorbikes rather than single occupant cars probably helps. And no metropolitan rail system. And something else a bit quirky was Train St!

It looks like the preference harvesters won. We desperately need reform of the upper house.