Many major retailers are phasing out single-use plastic bags. Or to be precise, they’re phasing-out free bags.

This is not the first time Target has tried this. They stopped issuing free plastic bags in 2009, but brought them back in 2013. Part of the problem seemed to be that the bags they sold were the same as the previously free ones they’d given away. Other retailers sell higher quality bags.

An outright ban has been in place for all retailers in NT, Tas, SA and ACT, plus Qld and WA joined them on 1st July, which no doubt is why the retailers have pushed ahead. Victoria is set to follow at some stage. Unclear what NSW will do.

I’m happy to see this change. Yet there’s been some unbelievably ridiculous hand-wringing from some quarters:

So plastics bags are now a matter of right/left combat. Of course. https://t.co/gkbJDp3Xvi

C’mon. If you still want a bag, it’s typically just 15 cents to buy one. FIFTEEN CENTS! That’s just one percent of a $15 shop.

For me, the only behaviour change is I now stuff a green bag into my work bag, so I have it for my detours to the supermarket on the way home.

We’ll all adapt. In fact, at this IGA at Nagambie (snapped on 30th June, before Coles switched) the locals seemed to be coping without any fuss whatsoever. 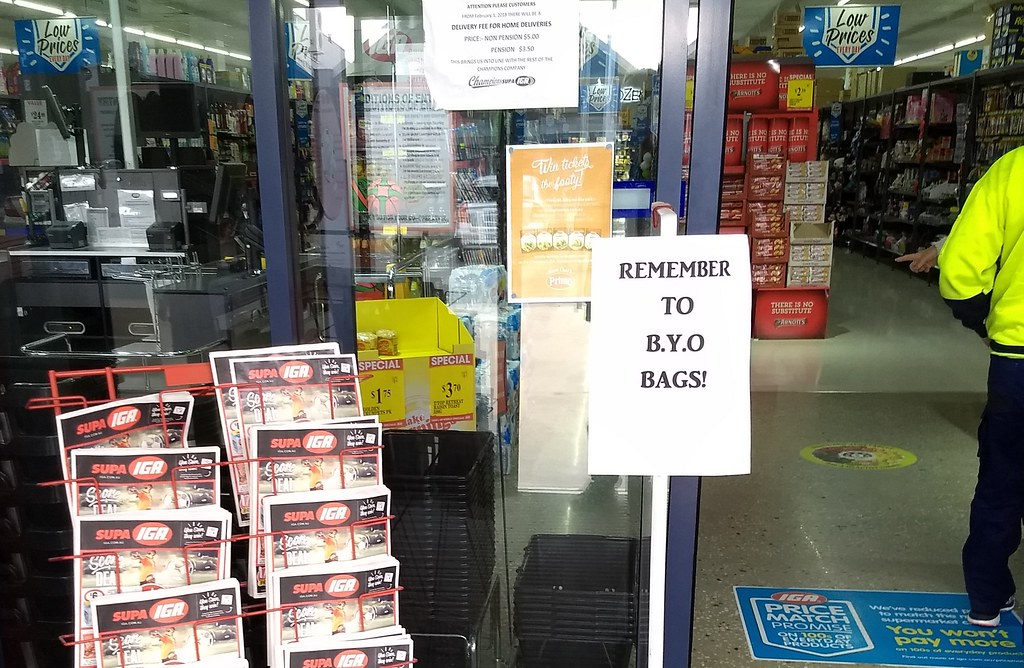 Update 2/8/2018: Coles backflipped on 1st of August and made the reusable bags free for an indefinite period.

Then the next day they backflipped again, and said the free bags will end on 29th August.

The Fisher and Paykel dishwasher, which had been in my house since I moved here in 2005, broke down again.

I’d previously thought that, given it was a pretty old model (circa 2000), I’d replace it the next time it failed, so that’s what I did, and found a good price on a Bosch.

Why Bosch? The Bosch washing machine I bought nine years ago hasn’t skipped a beat, and they also rate very well on the Choice web site (which is well worth joining if you’re grumpy that The Checkout hasn’t been renewed).

I paid the installation fee. While it didn’t take long, it was satisfyingly complex enough that I’m glad I did.

Dishwashers aren’t for everybody, but I hate washing dishes, so for me, this is money well spent. 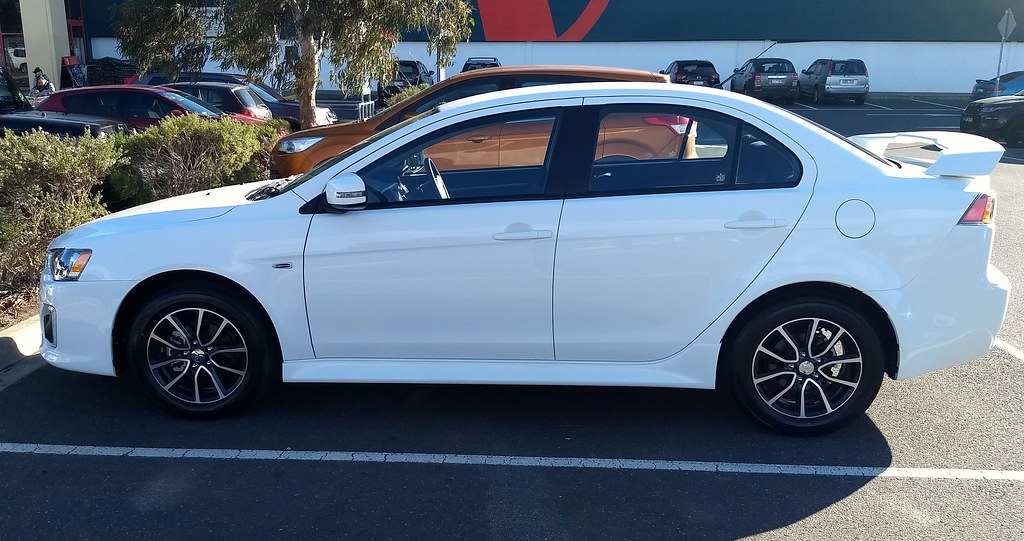 I picked up the new car last night. That’s it above.

I suspect the web has changed the shopping experience. I no longer go and look around car dealerships unless I already know what I want.

The car dealers I’ve dealt with during this saga seem less slimy than the ones I encountered the first time I bought a car.

When scouring Carsales, I had pondered that if I saw the perfect deal somewhere out in the country, I’d be willing to go to grab it. In the end I bought from a local dealership, which will make servicing it with them to maintain the warranty much easier.

In fact as part of the handover, they showed me where the service area is, and how the after hours drop-off/pick-up works. Clever. The chief service guy there recognised me from when he used to work on my old Magna years ago. Heh.

The dealer bloke showed me the basics of the car, then sent me on my way.

Amusingly/horrifyingly I scraped the bottom of the steep driveway just exiting the dealership. Can’t see any visible marks. Also amusingly, I thought the engine was revving loudly on the drive home, until I realised it was in Sports mode, not Drive. Oops.

Today I’ve sat in the car for a while with the manual and figured out all the controls. Or at least, the important ones.

The psychology of buying a new car and wanting to drive places is powerful.

Anyway, I like it so far, though I could do without the spoiler, which I don’t think helps visibility out of the back window. Perhaps I should have asked if the car was available without it.

A new car is always exciting. Looks great in the photo. What is “sports mode”?

Sports mode is basically a version of manual gears – if you want to use it. Otherwise you can just use Drive (automatic).

We bought a new Bosch a couple of months ago. We are happy with it. It is so quiet. It would be about the sixth dishwasher we’ve bought and the first time we have paid for installation.

The car looks fine. The spoiler is maybe a little large but I think it might look a little odd without anything sitting there.

You don’t need to have it serviced at the dealer from which you purchased the car. We bought a Mitsubishi from local dealer A who were OK with sales, but absolutely useless as a service department. We tried Mitsubishi dealer B who were scam artists, and finally settled on dealer C who are honest and genuinely helpful (Eastside Mitsubishi).

I usually try to carry my groceries inside my shoulder bag, backpack, or the plastic bags I took from the previous grocery runs. To be fair, it can be easy to forget to bring my own bag to the store.

In Aldi, I learned quickly enough that if you forget your shopping bag, you can just grab a box from the box bin somewhere in the store. I’ve never had a staff member objecting me to using one of these boxes (where were going to get recycled anyway).

KFC in Singapore encountered a similar outrage when they decided to get rid of plastic straws. A friend of mine complained that the prices of meals should be cheaper until I told him that straws can be bought for $1 for a pack of 100 retail and it is not workable to reduce everything by 1 cent.

The supermarkets might have got rid of the grey bags, but I still have a handful of them stored near the washing machine, they will only get thrown out when they break. Smaller shops still have them anyway, notably the Chinese $2 shops and grocery stores (the bags are usually white rather than grey, but they are the same types). I also have a number of the 15c bags (and identical zero-cent bags from Cash Converters and the like) as well as the “green” bags.

Straws at KFC aren’t really necessary as most KFCs use cans and bottles, if the remaining KFC restaurants which only serve postmix (hello Eastland) got rid of the undersized yet same priced paper cups they use*, there would be no point in offering straws at all. A straw doesn’t even fit in a 600mL Pepsi bottle (the only reason you can still use one is because it floats), and the KFC ones couldn’t be narrower anyway, it’s almost like drinking through a coffee stirrer (speaking of coffee, why the hell doesn’t KFC Australia do hot drinks anymore? It’s still available in the US, UK and probably every other country as well – they used to have coffee/tea etc. right into the 90s, although back then they used non-recyclable polystyrene cups for hot drinks, but losing the cups was still no reason to stop offering hot drinks though, the other restaurants have no trouble at all with paper coffee cups).

*IIRC the “large” paper cups are 480mL vs. a 600mL bottle. Add a quarter of a cup (if not three quarters!) worth of ice as most places do (unless you ask for no ice) and you would be lucky to get a can’s worth of “large” drink for $4. I hate to think what a “small” is, but I doubt it is even close to a 375mL can even without ice (probably 240mL or 300mL). The price is the same at KFC regardless of whether it’s in a paper cup or a can/bottle, it’s just marketed as “small” or “large” (or is “small” called “regular”, I forget).

The biggest waste is probably the all-in-one packaging KFC uses for the straw, spoon, napkin and refresher towel. Most people don’t even need a straw or a spoon but it’s there as part of the parcel (the spoon is pretty much only used for potato and gravy and the desserts but it’s not uncommon to see it with burger/fillet meals which don’t even need it, as not every item comes with a P&G e.g. Go Buckets and other sides like single burgers or chips).

If Maccas and Hungry Jack’s suddenly got rid of straws, it would be a bit weird though as they do not offer pre-packaged alternatives to their postmix Coke products (Subway is probably the only major restaurant chain in Australia to offer both types in the same place). For the sake of inclusion, Red Rooster tends to only have cans and bottles.

Well, it turns out that Maccas will bring out paper straws instead. Let’s hope that they don’t end up disintegrating within five minutes and becoming a new Coca-Cola flavour at the bottom of the cup.