On Friday, The Age reported that Infrastructure Australia has put out a report that asks what sort of city we’d like to have in 2046:

IA’s question is a good one, and put in terms many people can understand.

What outcome do we want? Because that’s the one we should plan for. 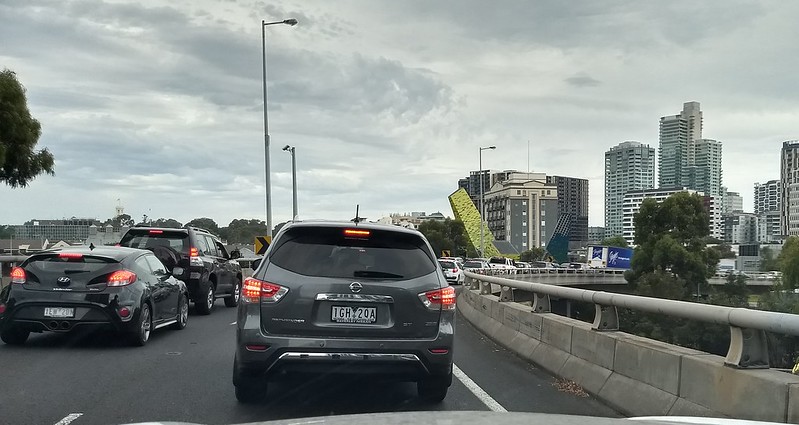 As it happens, also on Friday, the Financial Review reported that the International Monetary Fund says Australia has been spending too much on roads, and the pendulum needs to swing to railways, ports and airports.

All this raises many questions, but here’s one I’d already been looking into:

How many motorways are there in LA, NY and London, and other big cities, compared to Melbourne?

I looked at the total kilometre length of motorways in the three cities – plus a few others where I could easily find data. 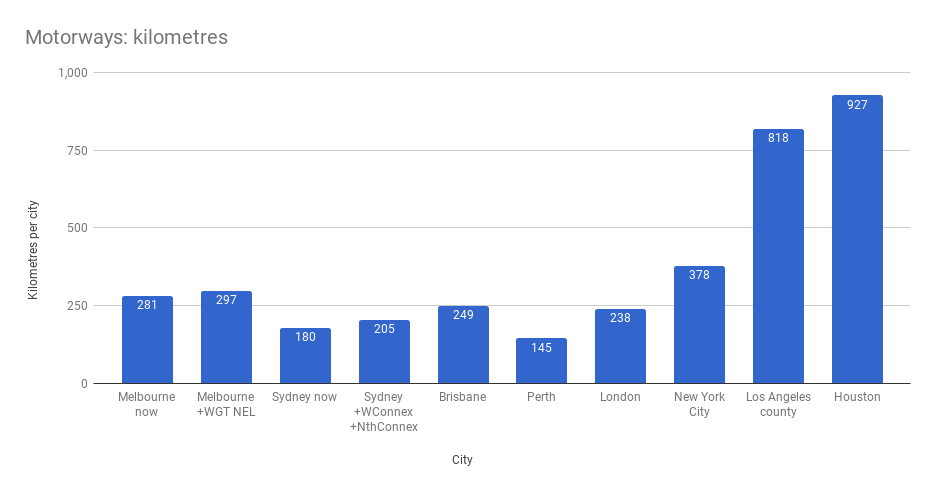 …taking that into account, you will note that Melbourne already has more motorways by length than London and Sydney.

In fact we’ve already got more kilometres of freeways than any other city in Australia, but the WestGate Tunnel and North East Link, which the current government wants to build, will see go even further beyond the others.

Houston is the clear king, at least in this small sample. That’s the city where they keep massively expanding their freeways, but their traffic doesn’t get any better. 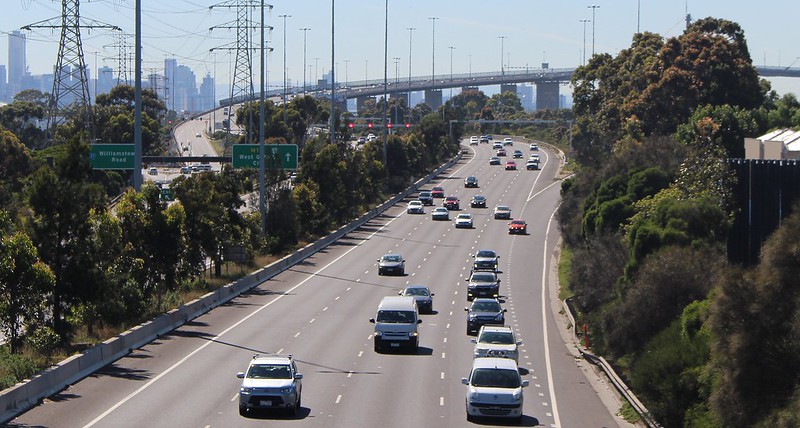 What do the big cities do?

Some people argue that as our cities grow in population, they need more motorways.

What happens when we divide by population (for the same area) to find the motorway kilometres per million people? 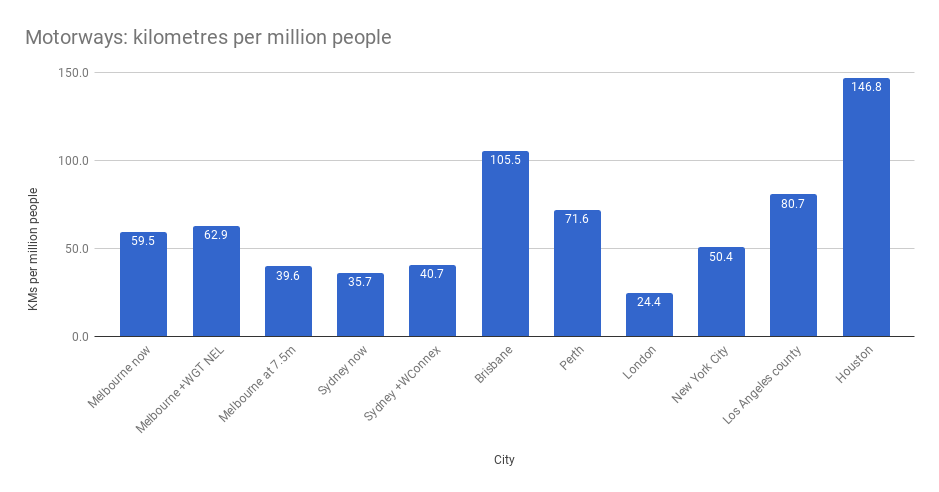 Obviously a more exhaustive study, with more cities, using this type of methodology would be interesting.

Nonetheless… by this measure, what’s striking is that we in Melbourne have more motorways per person than London or New York City. If we keep building them, we’ll creep closer to Los Angeles.

Back to the IA question: what do we want for our city? LA, NY, or LDN?

I don’t think we want to be like LA. Sprawling, dispersed suburbs dominated by cars? LA’s bad traffic is notorious. No thanks.

The key thing to remember is which transport modes move people efficiently as cities get bigger. As I said recently: Roads get less efficient the more people use them … Public transport gets more efficient.

And we will get the city that we plan for and build for.

On the measure of motorways at least, if we want to be like London or New York, there’s a lot to do to achieve that… but building more motorways isn’t one of them. Time to look for more efficient ways to move people around.

Building roads is the worst way to deal with urban growth, precisely because it locks you into trying to accommodate it with by far the most space-inefficient method of transport. #GetOnBoard

21 replies on “How many motorways does a big city need? And what sort of city do we want?”

I was happy with the light rail systems in LA (loved zooming down the middle of the freeway while cars on either side were crawling along) and Houston, just wished there were more of them. Unlike Houston, Arlington has no public transport (the closest you’ll get is the train between Dallas and Fort Worth, which will take you to about 10kms from the town centre), yet is big enough to have a stadium which holds as many people as the MCG. As a consequence on event days you’ll see many signs advertising parking which gets progressively more expensive as you get closer to the stadium, it can cost well over $50 unless you want a bit of a walk.

I’m vary of the comparison as it only lists English-speaking countries somehow.

“…as it only lists English-speaking countries somehow.”
I don’t think including European and Asian cities with their even higher population densities, fewer freeways and even better public transport alternatives will do anything to invalidate Daniel’s observations.

I’d have loved to have done more cities, but in the limited time I had available, I wasn’t able to find data I was satisfied accurately reflected the kms and populations for more metropolitan areas in a reasonably consistent manner.

If anybody can point me to similar studies, that’d be great.

(And for those who asked, London includes the M25.)

Still quite a road network, considering how everyone raves about their rail system.

A few points:
1. “Houston, they have a problem.”
2. What areas are included with Brisbane?
3. Minor quibble, which Marcus Wong has touched on, why call them motorways and not freeways? (Possible answer?: “traffic doesn’t freely flow anymore.”)

Why call them motorways? Because I wanted to include both freeways and tollways.

The count for Brisbane excluded the Sunshine and Gold Coasts, but included other areas in metropolitan Brisbane.

Have you factored in for Sydney Northconnex motorway which is currently under construction. But also there are also more plans F6 extension, Western Harbour Tunnel & Beaches Link .

@Anonymous, the second Sydney figure includes both WestConnex and NorthConnex. The caption got abbreviated. Will fix for clarity.

Lots of cities have plans for motorways. For most I only included those completed, and for Melbourne and Sydney the specific ones which appear 100% certain to go ahead.

Those figures for Sydney look wrong.

The amount of new motorway for Westconnex is not very long. And, if you want to count that Westconnex includes adding a lane to some of the existing M4, then you would need to subtract the M4 from the total length of motorways, if you are adding Westconnex.

I don’t think we get a say in this. TransUrban present plans, and Labor’s Minister for TransUrban signs off on them.

Wikipedia says 33km, which I used, but then goes on to say “Together, these projects will create around 16 kilometres (9.9 mi) of new tunnels” — so 16km is the figure to use?

Daniel, I can think of one example of a tollway not being a freeway, and that is the Exhibition St extension/Batman Ave. Are there others, here in Melbourne?

“Brisbane now” is now fewer km than “Melbourne now”, so there’s another paragraph to remove…

I did my own summation and got the same result.

What’s interesting is that we really only have about 100km left to go on everything that *might* be worthwhile in the next 50 years.

Why the focus on the motor vehicle? Benefit – cost for funding cycleways is shown (in the case of Inner Sydney) as better than 3 – 1. Most motorway projects have difficulty in even matching 1 – 1! This sort of transport exercise needs to be co-related with the existing structure and future plans for a city. In Sydney, the problem is that the WestConnex etc projects were committed before the Greater Sydney Commission had prepared its new metropolitan plan and now there may not be the money to properly implement its recommendations! Public transport, bicycling and walkable city structures are the future …

Well the Westconnex propaganda talks about 60 km of tollway from Penrith to the Airport.

The 20 year toll franchise expired about 7 years ago and the toll was removed.

The toll was re-introduced last year. I am not sure what the final Westconnex scheme they actually adopted, but it runs from Strathfield towards the airport. It is not very far. Westconnex also includes some or all of the existing M4 motorway, and they have added yet another lane to it. I am not sure exactly which section of it is tolled now, and they might have more than 1 tolling point and charge different prices for different parts of the road, I am not sure.

[…] Melbourne is growing fast. Our transport system needs to mature, and any sane policy should dictate that the backbone of the transport system should not be moving individuals in cars, but by mass […]

[…] in Australia, where they build ever more roads as cities get bigger – despite this being not how the world’s biggest cities solve their mobility […]

[…] It’s not as if Melbourne doesn’t have already enough major road projects underway. Two new tollways is two too many. […]