PTV released their passenger load surveys for trams and suburban trains, with results from May 2017. They used to do these twice annually, now it’s only once a year.

These surveys are used to measure crowding on Melbourne’s trains and trams in peak hour.

It’s not to work out whether cancellations and delays need to be reduced (of course they do). It’s to work out which lines need extra services added. 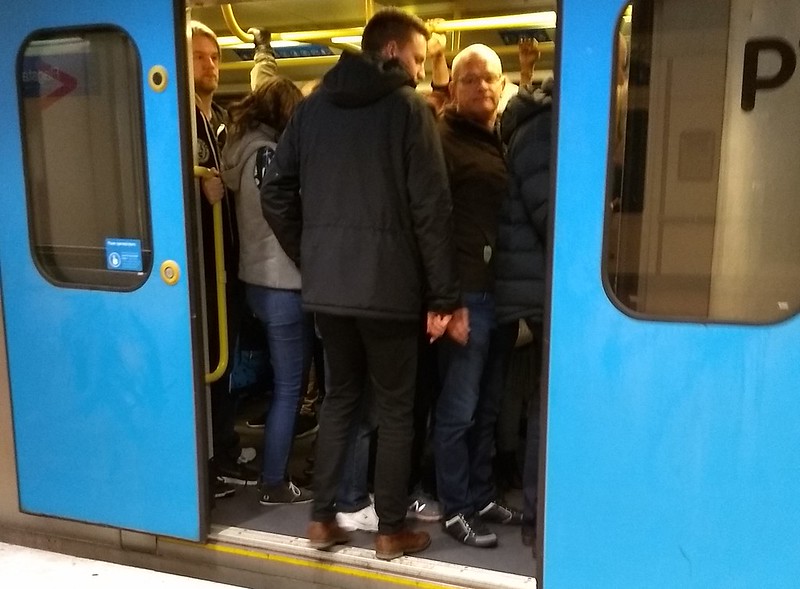 The main thing to note is that, as expected, the benchmark standard for trains has been modified from 798 to 900, following the removal of some seats in 2016.

Despite the ongoing confusion over Capacity vs Load Standard, they insist on using the C word in the report. The actual capacity of a 6-car train is actually somewhere north of 1300.

As you’d expect when you move the goal posts like this, there are far fewer breaches of the load standard:

The worst for crowding this time around are the South Morang and Craigieburn lines, both serving growth corridors to the north. South Morang is being extended to Mernda, so clearly that line will need more services when the extension opens.

Was removing the seats reasonable? Depends on your point of view… everyone’s got a different perspective, which probably relates to how long your usual trip is, and whether your priority is getting a seat, or you’re more concerned about just squeezing onto the train.

The most common comments seem to be "there's not enough seats!" and "there are too many seats!" 🤔 https://t.co/ROSt9BCIji

I think in this case, they found a good balance (which broadly matches the new train fleet). The overall reduction in seats was about 17%.

But this kind of change is a once-off. There would be political ramifications from having a train fleet with barely any seats (I’d be protesting, for a start – trips on our train system are often 45+ minutes). There may also be technical limits due to the capacity of the motors and brakes to handle greater passenger loads.

Meanwhile on the trams, they’ve gone way too far with seat removals. The latest revision of the B-class tram (the “Apollo” model) has only 40 seats. The original layout had 76 — so it’s reduction of 47%!

And the annoying thing is that the leaning points/bum racks are set up in such a way that they barely save any space at all. They’re big and bulky, and have a substantial gap between them and the wall/window. 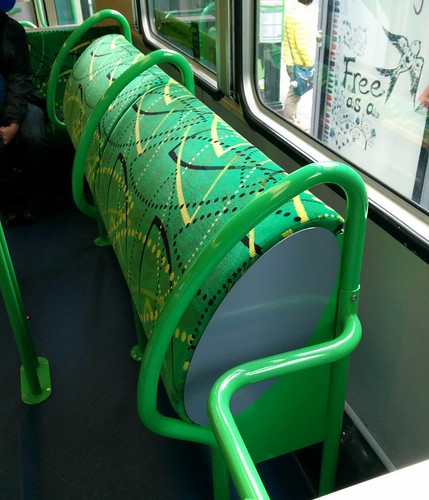 Perhaps it’s no surprise that the tram survey shows that the Apollo variant (with 12 fewer seats) makes no difference to the capacity of the current B-class trams fleet. 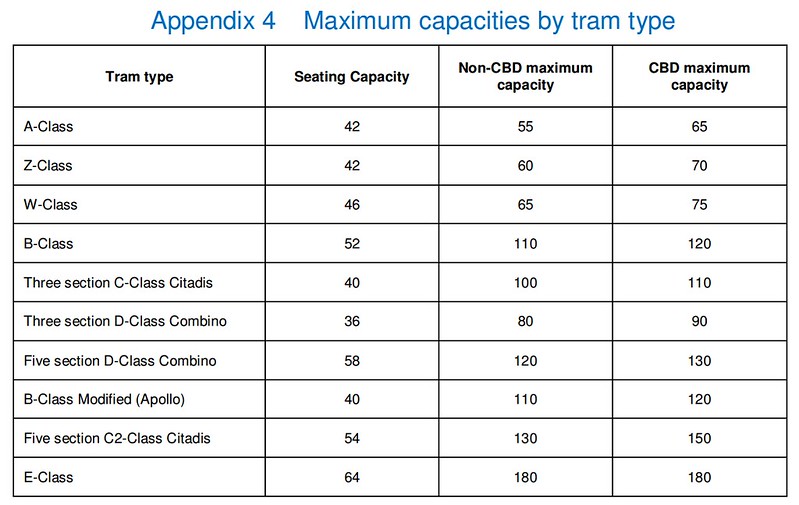 (Note: once again, these figures are not strict, absolute capacities. If they were they wouldn’t be different for CBD and non-CBD locations! They are benchmark standards.)

As for the rest of the survey… overall, tram load breaches are down in PM peak, but have been steady in AM peak since 2015.

It looks to me like the tram routes with the most load standard breaches are those that generally use the smallest trams, especially route 48 (almost always A-class trams) and also to an extent routes 1 and 6 (a mix of big and small trams).

Some sections of the network have had a lot of patronage growth, such as the southern section of route 58 (measured where it passes the Casino) up 27.8% in a year, following a rise the previous year as well. The northern section of route 58 had a drop in patronage, but I wonder if the route was in flux at the time, as it was just after routes 55 and 8 merged to form the 58, and operations were a mess. 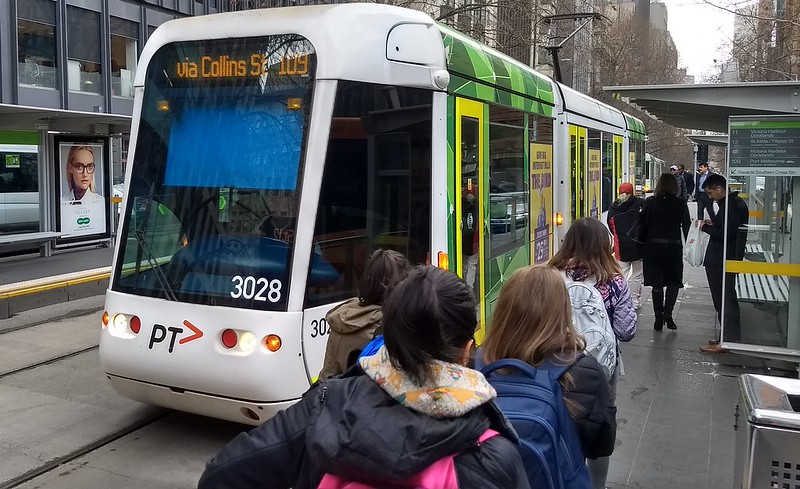 On page 15 there’s an interesting note about automated counting by 2018 for tram, train and bus. That’s pretty soon… I wonder if it will actually happen.

Because the measurements for crowding are all done at the edge of the CBD (the “cordon”), this survey is not directly measuring crowding from the Free Tram Zone, though I gather that’s measured separately – it’s probably why the plan to divert route 12 to Latrobe Street (and fix poor frequency there) has not happened.

The survey has a number of non-CBD measuring points, which can capture hotspots around the network.

The new bigger E-class trams are being brought into service, which sees the older large trams (particularly B and D class) cascade through the network.

So the big question is: will tram fleet changes will keep pace with population growth from inner-suburban consolidation and re-development? 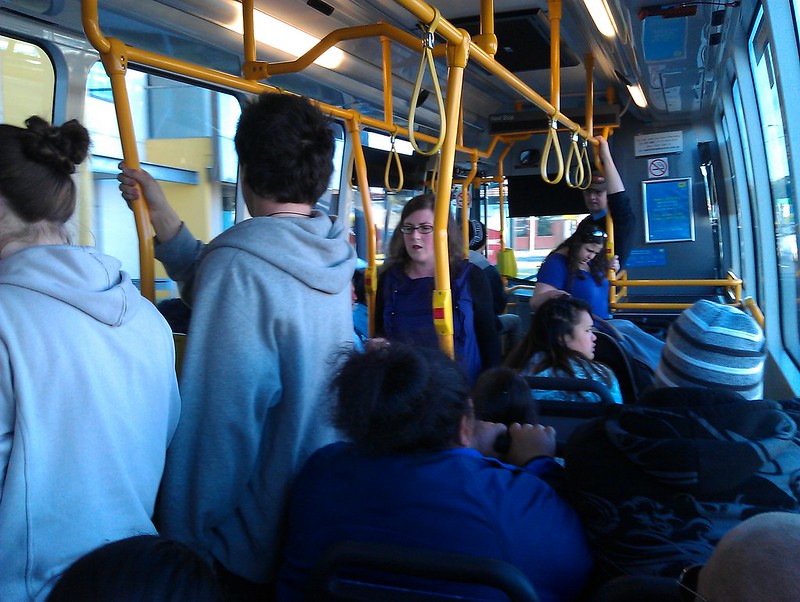 There’s no bus capacity survey, despite ongoing crowding on some routes. Move along, nothing to see here.

The thing I dislike most about the B-class tram modification is the removal of sets of two bench seats facing each other. If two couples are travelling together to/from an event, it’s nice and social to be able to sit together. Good luck on these trams.

Hi Daniel, do you think there might be any correlation between delays caused by sick/ill passengers and the increase in the number of passengers who are now forced to stand for longer distances?

“route 48 (almost always A-class trams)” – There are quite a number of services on route 48 being served by Citadis trams now, especially on weekends.

A bit mixed with the removal of seats. Being originally from Tokyo, many people stand in the train for their commute for at least 30 mins, and some do this up to 2 hours. If anything, getting my way around the new trains would be easier.

Having said that I’ve noticed that the trains in both Melbourne (where I used to live) and Sydney (where I now live) do not have as many places to easily grab onto as the trains in Tokyo do. Most notably, the overhead grab rails here are higher than what I feel comfortable, while the ones in Tokyo have rings connected to straps hanging off the ceilings at more comfortable heights. (Linked picture below) This seems to be more of a problem on the older fleets, but I still see cases of this in the main standing areas of the new train shown.

Based on the notes in the document, it seems that the inbound is based on the last station before the cordon stations – would be interesting to see how that varied by the stopping pattern of the train. It would also be interesting to know at what point on a service all the seats are notionally taken – similar to V/Line’s capacity measures. I take the point that people might be standing for 45 minutes plus, particularly on the eastern and southern lines – but they shouldn’t be standing at the outer extremities of the line.

I believe Brisbane used to have a standard on train overcrowding, that passengers should not have to stand more than half an hour. This would correspond with how long most people feel comfortable standing. It should be incumbent on ptv to develop a standard from an evidence base. There would be variation based on age, health, pregnancy, etc, so a proportion of passengers would require a seat for the whole journey.

Why has it taken so long for myki data to be used in place of manual passenger counts ? Myki was introduced in 2008, and one of its selling points was that it would provide better data on useage of the system. It surely can’t be difficult to write a program that counts the number of passengers on each train, tram and bus from the myki database.

Now that seat reductions on trains are complete (I believe), the crowding will rise again if there are not significantly additional services.

The solution for the 1 & 6 tram crowding may be to extend another Swanston St tram route north along Lygon St. Maybe they are waiting for the Metro Tunnel to free up Melbourne Central-Melbourne Uni capacity?

Inner-suburban consolidation is also an issue for the trains as well. Many stations are hubs for consolidation.

Perhaps there could be automatic announcements on trains/trams to remind people not to wear their back packs. A person with a back pack can take up the (standing) room of two people.