Just posted on the holiday blog: Brussels — where I meet my new baby cousin in a tram museum (of course!)👶🚋

The state government are running a competition for naming the new stations to be built as part of the metro rail tunnel.

It’s a good idea to get suggestions. Some of the working names are a little uninformative, and someone out there might have a brilliant name idea that nobody in officialdom has thought of.

A panel will look at the suggestions and make recommendations to the government.

My thinking is the names should be dull but informative. 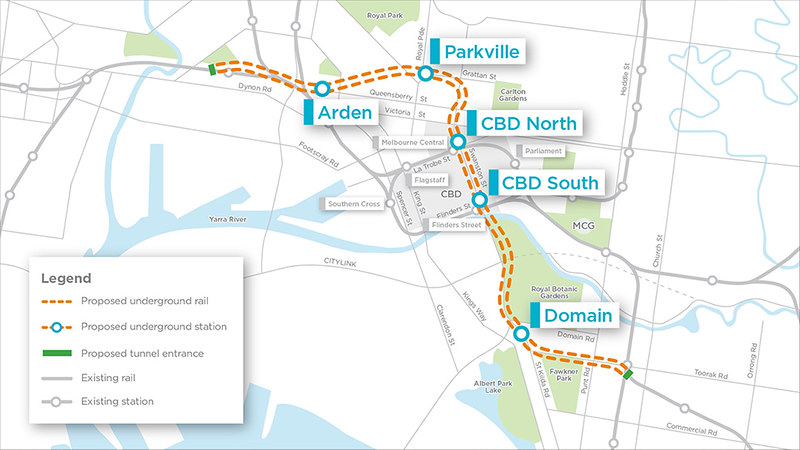 For all the bright ideas of naming them after people or using historical or cultural references, fundamentally these names are a navigation aid to be used for decades to come.

The first aim is not to honour something or somebody, but to help people get around, so the names have to tell you where the stations are.

As one observer pointed out: Jewell and Anstey stations (which are both named after politicians) just don’t work as names.

New train stations should be named after location, says @danielbowen I agree. Jewel, Anstey, StnX are so confusing! https://t.co/PFVmUs3v18

Perhaps in time major stations can become landmarks in their own right, but I suspect this is unlikely with underground stations without a big surface footprint.

So for the tunnel, here is my initial thinking, from south to north, and using the working names as a reference:

Domain: To be located underneath the current Domain tram interchange. While Kings Domain (park) is further north, the broader Domain Parklands includes the area around the Shrine immediately next to the station site. So “Domain” or “Shrine” would work, as both are well-known landmarks. “St Kilda Road” would be too vague.

CBD South and North are too similar, so I think it would be unwise to keep the working names.

CBD South: If you were aiming to use a local landmark, then the station’s location is close to Town Hall, the City Square, and St Paul’s Cathedral.

But this station will also have a direct paid connection into Flinders Street Station, so to aid rail network legibility, it would make a lot of sense to simply call it (part of) Flinders Street.

CBD North: Some people have suggested RMIT, but RMIT has multiple campuses including in Bourke Street, and out at Bundoora. The major landmarks are the State Library (so perhaps “Library”) and the City Baths.

There’s also a strong argument that “Melbourne Central” is not a very good name for Melbourne Central Station. It couldn’t stay as Museum after the museum moved away. You could rename the whole complex “Library”, but I suspect that ship has sailed. It may not be a main central station, but there are others around the world called “central” that aren’t the main station (I found one in Exeter) and at least the shopping centre is a landmark.

Parkville: This one will directly serve Melbourne University and the hospital precinct, and I can’t immediately think of any other landmarks in the area. I wouldn’t call it “University” — we’ve only in the past decade or two got away from trams using that name, which is vague given the number of universities in Melbourne. “Parkville” is probably a pretty good name.

Arden: This will be in a new development area. The name Arden is derived from Arden Street, but is that name locked-in as a suburb name? Whatever the suburb is going to be called, I’d use for the station.

Those are my initial thoughts.

20 replies on “What should they call the metro tunnel stations?”

Agree with your suggestions, expect CBD North and CBD South are a bit long (4 syllables each).
Maybe “Baths” for north city station and “Square” for south station.
I like “St Pauls” as a name but it’s opposite Flinders St station.

Just for the removal of any doubt: CBD South and North are working names, and I’ve noted them for reference (to the map) only. I am absolutely not suggesting they be used permanently.

Haymarket is another useful one. Probably becomes clearer if we improve the tram terminus.

I like Domain and Arden.
For the intervening three, I’d suggest Flinders Street, La Trobe Street and Grattan Street.
City Square might be good, but it’s so close to Flinders Street it should just be the same station. I guess if the La Trobe Street station will be similarly closely connected to Melbourne Central, it could be named that way too.

The names need to be short where possible, and be a word that is very easy to read and say.

I like all of the above names. Perhaps City South and City North in place of CDB South and CDB North.

My submission was more or less the same as suggested here: Arden, Parkville, Melbourne Central, Flinders Street, and Domain.

Having two different stations share a paid area could get confusing to people. Platforms 5 and 6 at Melbourne Central would be easily understood – doesn’t matter where you enter the station, just follow the way-finding signs. I can easily see people using the CBD South entrances to access Flinders Street also, especially when it is raining.

The alternative there is either putting both station names above entrances (confusing) or having people not know they are connected.

I was familiar with London’s Paddington Station and knew how to walk out into Praed Street after arriving on the Heathrow Express. Next visit we arrived to St Pancras on Eurostar and caught the train from Kings Cross to Paddington and we were totally lost and we ended up on the wrong side of the station wandering around the canals of Paddington Basin. There are two stations, both with the same name and it depends which line you use to get to Paddington as to which station you will be in. We must have caught the Circle Line from Kings Cross. So, I would not like to have the city stations use the existing names.
Arden, Parkville, Library, City Square or St Pauls, Domain.

Yes, I agree with Shrine, City Square, City Baths, Parkville and Arden. I do think that Parkville and Arden should retain their names. I wouldn’t mind CBD North and CBD South being called Flinders Street and Melbourne Central, however, this could be a bit confusing.

I like the name Domain for its simplicity. There is already a major stop near there with that name (Domain Interchange) and it helps to be connected. If they chose some other name, then the tram stop should follow suit.

CBD North could be Franklin or just City Baths.

Parkville could be Royal Hospital.

Like bok, I submitted Arden, Parkville, Melbourne Central, Flinders Street, and Domain. You just hope the panel deciding the names don’t try to choose “new” names just for the sake of it

I agree 100% with Daniel’s suggestions and they are also the names I entered into the competition:

As for Arden, I agree that the station name should coincide with whatever the planners come up with as the name for the new suburb. I am happy with the name “Arden”, but if the new residential area is to be called something else then so should the station.

I suggested “Chloe” for the CBD South station, after a long time resident of “Young and Jacksons” – another other landmark on the corner of Flinders and Swanston. Perhaps not politically correct, but she is certainly memorable.

I don’t know how likely it is that “City Square” or other ‘landmark’ names will be more useful than a commemorative name.

Tourists won’t have a clue where it is. You have to do the research anyway before you travel in a foreign city to find out where you need to get on/off the train. Whether it’s named after a nearby landmark or otherwise isn’t going to matter to you – unless you’re looking for that landmark.

As for locals, I think we can all figure out where the five new stations are.

Domain is the hands down winner for the southernmost station. With the Domain, Domain Rd and the Domain Apartments, it is just the most logical. Also anything over militaristic should be avoided.

Flinders St is the most logical name for the new platforms for that station and consistent with much international practice for interchange stations serving perpendicular lines (imagine how confusing the London Underground or other similar major city metro or suburban rail system would be if it used different station names for platform groups serving perpendicular lines). However, if a new name must be used I suggest City Squares and it will by between the two major squares in the city. Cathedral is too denominationally biased, St Pauls is too religious and there are other churches with St Paul in their name and combining them would be rather long as well as too religious.

Swanston should not be used for either CBD station as there will be more than one station in Swanston St. This is also a reason not to call the new CBD station Latrobe St, because of Melbourne Central and Flagstaff.

Melbourne Central is the best name for the new part of the station on the new line (see above reasoning for Flinders St). Given the location of the William Barak Building, Willam Barak could, subject to appropriate consultation, be an acceptable name for this station. Had the Russell St alignment been taken, Old Melbourne Gaol or Trades Hall would have been good names.

The westernmost station has by far the greatest potential for inventive naming as it will likely name/rename the precinct around it (at least unofficially). This station thus has the greatest potential for an Aboriginal name. Arden is also a possibility but, given the station has no planned entrance to/from Arden St, is not preferable. North Melbourne is, if the existing North Melbourne station is renamed after its actual location (which has several benefits), a potential name as it will be the most central station to the suburb of North Melbourne.

Jewell, Anstey, the above mentioned existing North Melbourne, Rushall and several other stations have the potential to be given names closer to their suburb.

I’m all for using the same name for all stations in the same line and distinguish them by the line they serve. Don’t worry about repeating platform numbers so instead of City South Platform 3 use – Flinders Street – Metro Line – Platform 3 as opposed to Flinders Street – City Loop – Platform 3. Then when you add a third line and fourth line, and no doubt it may well occur, additions are easy.

While I am ineligible to join in the naming contest, as I no longer live in town, here are my thoughts:

CBD North/South – using the existing names of Melbourne Central and Flinders Street. I consider the two stops to be extensions of existing stations. Adequate signage in the concourse and platforms should help distinguish the new platforms from the existing ones. The signs on the platforms and the announcements on the trains can say: eg Melbourne Central – City Loop, or Flinders (and Swanston) Street etc

Parkville: Parkville-Haymarket – Referring both to the suburb and the unofficial locality.

Domain: Domain Interchange – We might as well adopt the name from the tram stop.

[…] As for the others… they’re all good location-based names, which tell you precisely where the stations will be, and that was always the priority in my opinion. […]