This in the Herald Sun a few weeks ago: Melbourne traffic congestion on par with world’s biggest cities like London, Rome and New York (paywall):

TRAFFIC congestion in Melbourne is on par with New York and could rival the world’s worst cities if nothing is done to combat the problem.

Figures supplied by Tom Tom show congestion levels in Melbourne are at 33 per cent compared to its population.

This means motorists are sitting in peak hour congestion a third longer than if the traffic was free-flowing.

And then this in The Age: Melbourne now as clogged as Sydney, and the city’s north-east has worst traffic:

The Grattan Institute research is based on an analysis of Google map data for more than 300 routes in and out of Sydney and Melbourne. It was collected 25 times a day over 12 weeks between March and June 2017 and found:

An average morning commute to the Melbourne CBD by car takes almost 70 per cent longer than in the middle of the night.

These are based on very similar surveys: the Herald Sun used the much-criticised Tom Tom congestion survey. The Age used a Grattan Institute survey.

Apart from assuming that getting around by car as fast as possible is automatically the most important thing, you get wacky conclusions because a city with 24/7 congestion (only slightly worse at peak hour) is deemed to be less congested than a city where most of the time there’s free-flowing traffic but for a couple of hours a day it’s proportionately worse.

In any case, if this is our big conclusion that drives transport policy, I think we’re asking the wrong questions. 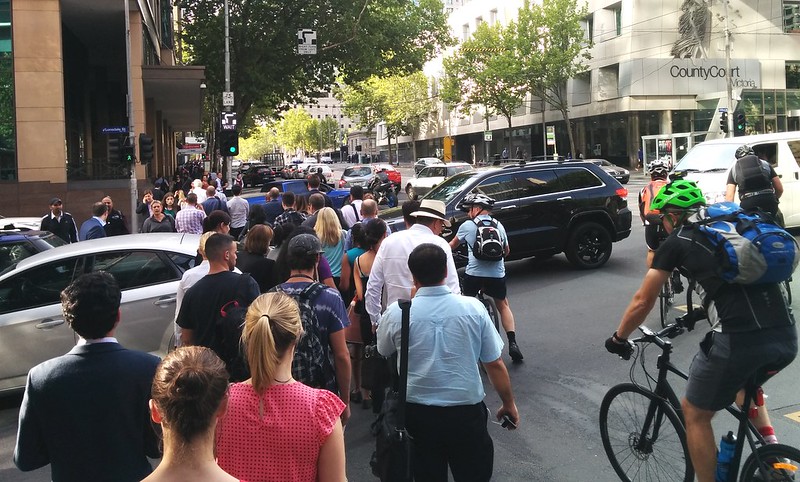 The debate shouldn’t be about congestion

*Or are forced to do so for lack of viable alternatives.

(To contradict myself for a moment: congestion that gets in the way of efficient transport modes absolutely is the enemy. Ways need to be found to get pedestrians, bikes, trams, buses and trains around it, or at least through it quickly.)

One of the major benefits of a big city, if there are lots of opportunities well-serviced by public transport (and walking and cycling), is that it makes it easier for everyone, of every age, and every income level, to access them… provided they don’t insist on bringing their 2 tonne private vehicle, of course. 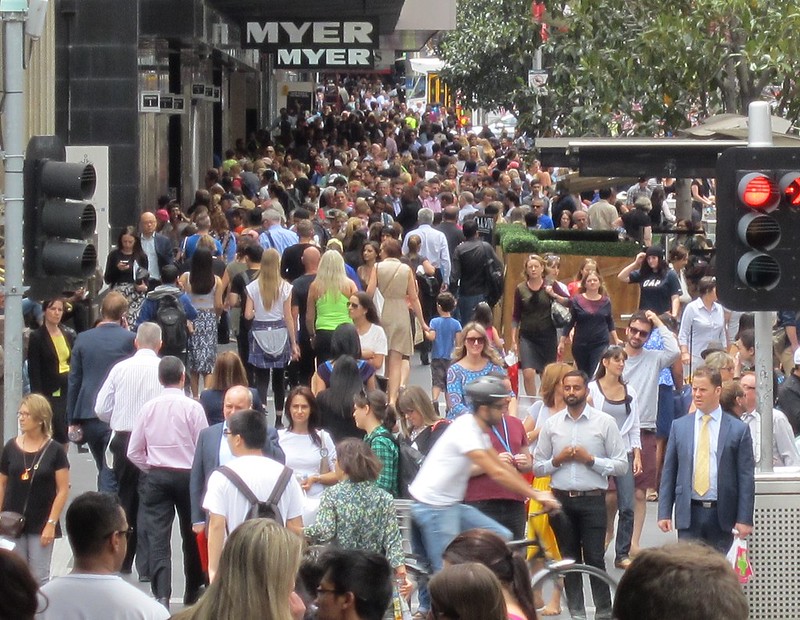 What sort of city do we want?

There’s also a lesson in the headlines. In the Herald Sun story, New York, London and Rome are cited, and compared to Melbourne. In other words, the most prosperous, vibrant, successful cities on Earth have congestion. And we’re becoming more like them.

Is that actually a bad thing?

As Samuel Schwartz says in his excellent book which I just finished reading:

…a study from Texas A&M’s Transportation Institute found a powerful correlation between per capita traffic delay and per capita GDP; and the correlation wasn’t negative, but the opposite. For every 10 percent increase in traffic delay, the study found a 3.4 percent increase in per capita GDP. It’s not that congestion itself increases economic productivity, but that places with a lot of congestion are economically vibrant; those without, not so much.

Should we really be trying to stamp out congestion, or should we look at how other cities deal with it?

When will they figure it out? More roads = more traffic. http://t.co/pAR97f51yi #SpringSt pic.twitter.com/b80DzX9GHU

Rather, they provide lots of ways of avoiding traffic congestion, by making sure more people can get around without driving in it and adding to it: by providing viable non-car modes for most trips, including non-work, non-CBD trips.

Meanwhile, the state Coalition is calling for more decentralisation to maintain Melbourne’s liveability. By “liveability” I suspect they actually mean crowding and congestion.

Again, look around the world at the cities we might aspire to be.

What makes Melbourne’s congested city centre successful in this age of the Information Economy is lots of people in a relatively small space. The majority, who come in by train, are simply never affected by traffic congestion. (They are affected by rail disruptions such as last week’s major outage, but that’s not an everyday thing.)

Decentralisation plays against one of our key strengths.

Which is not to say we shouldn’t increase the number of viable business districts, if it’s possible.

But my key point is: congestion isn’t our enemy. Lack, and inequity of access is what we should be talking about, and seeking to fix.

13 replies on “Congestion is not the enemy”

It’s quite easy to deal with congestion in technical terms and it’s called road network pricing. Although quite easy and quick to implement the politics is the main barrier.

No mention of the ridiculous amount of immigration and how Melbourne put on 1m people in 12 years. No infrastructure project will ever be enough.

It should really come as no surprise that the Coalition vouches for decentralisation.

Whereas once their side of politics argued for centralisation when the wealthy preferred the unpolluted countryside and the convenient fringes of the metro (such as Caulfield), the inverse is now true. Now that the most desirable suburbs are in the core of the city, the Coalition now advocates pushing the masses away to the regions and to the urban fringes, so that the wealthy may enjoy uninterrupted travel in their 4WDs, without having to gaze out their tinted windows at the poor.

I’ll admit the above is somewhat tongue-in-cheek, but I don’t believe it is far from the truth.

Commuting time 70% longer at peak than in middle of the night does not seem too bad to me – 35 mins instead of 20 mins, or 70 mins instead of 40 mins for example. Trains are probably 100% more crowded at peak than off-peak by comparison.
Congestion charging is the best solution via new tolls on presently untolled freeways near CBD (Westgate, Eastern), and key arterials from suburbs within 3 km of CBD (St Kilda Rd, Kingsway etc), with projected money to build NE link (to keep through traffic away from inner city) and also fund/accelerate additional PT improvements to accommodate any PT uptake from dissuaded drivers.

@ Timboman
The arterials will be difficult to toll as it will encourage rat runs, probably a cordon type system such as in London would work better. PT should also have variable fares. 70 minutes each way sometimes longer (2:20+ hours) is quite a large proportion of someone’s day. If you add up all the lost time and wasted fuel it also adds a cost to the economy, so congestion charging is worthwhile.

It depends a lot on what sort of “decentralisation” you are considering.

If you mean, developing more industry ( of one sort or another ) in Wodonga or Ballarat or wherever, then go for it.

On the other hand, more decentralisation to suburban areas, such as what Sydney has at Parramatta or North Ryde or Chatswood, would not be such a good idea, because the public transport is largely effective to the Melbourne CBD only. For people who are not within 7 km or so ( who have trams ), you’d actually be better off in Melbourne by super-centralising into the CBD even more.

It would be good if VicRoads watched this video because they are doing the opposite.

Interesting that the comments are about the ‘solutions’ rather than the point daniel is making; that congestion is not the economic drag that its always made out to be. Like he said, crowded busy cities drive higher GDP, and the congestions that really matters is the congestion on public transport. So congestion pricing may reduce car congestion for a while, but like London will eventually just return to the same levels. I guess the Melbourne Metro is going to be a great boon, but the new signaling just announced is going to be the really important bit. Id like to know when / how can this be rolled out to all lines please ? And can the phases of the Network Development Plan that come after MM (stages 3 and 4) be brought forward at all ? Eg. do Upfield line commuters really have to wait until 2026 until they get trains running more often than every 18 minutes ?

We tend to keep our comparisons to supposedly first world cities, but six days in Jakarta in 1996 completely invalidated that Texas A&M’s Transportation Institute correlation. It then felt like a Sydney-like layer sitting atop another maybe 15 million city of servants. Congestion was everywhere and everybody from the Sydney class had a driver who could drive safely enough by ear, enabling them to work in transit, however long transit took—a virtual smart phone out of place and time. There was also little doubt that the absence of any alternate mode for that class pushed equilibrium deep into traffic congestion.

One minor peccadillo on an otherwise excellent article. Namely the idea that alternative modes bypass congestion.

Congestion is so baked into economic success that any and every form of transport experiences congestion in a successful economy. In the case of trains this manifests as crowded platforms and trains, bypassed stations and uneven and inexplicable delays (due to timetables being run without padding to maximise throughput). In the case of buses and trams this manifests as queues of vehicles waiting to access stops. In the case of walking, well have you ever tried walking up the footpath of Elizabeth St in peak?

This isn’t to negate your point, rather to reinforce it. Car congestion it seems is particularly intolerable for the modern person and it kicks in at very low levels of economic activity. Nevertheless, congestion on all modes is correlated with economic success and on all modes tends to be made worse by expanding the infrastructure.

The solution then is to forget about reducing congestion and instead find ways to live with it. A great start would be focusing more on getting people to their corporate offices and focusing less on getting their cars to the corporate car space.

[…] More reading: I don’t think the debate should be about congestion. It shouldn’t even be about mobility. It sho…. […]

[…] if times are slightly longer than claimed, something close to this opens up a myriad of opportunities. For example, when my sons were considering their university options, Latrobe and Deakin were ruled […]