Sunday, and today was the day we were scheduled to meet all the English relatives – aged from 2 to 92 – this was one of the primary reasons for the trip.

We hit the streets of Bath in search of food, discovering yet again that before 8am, almost nothing in this tourist town is open. Worse, being a Sunday, that cafe from the day before with the great cooked breakfast wasn’t going to open at all.

Another prospect we’d spotted the day before was also closed. We kept walking in vain trying to find a decent breakfast place. As we walked, we got hungrier, and we (or at least I) started to get quite cranky.

I spotted a Pret, a sandwich chain well known in the UK. It said in the window that they sell toasties.

“Right!”, I declared, desperate for some sustenance. “I’m going into Pret, and I’m buying a toastie!”

The bloke behind the counter said, with surety in his voice, that they don’t sell toasties.

Suddenly I had self-doubt. Had I really seen it in the window? He pointed me to a cabinet full of things I didn’t want. I walked out.

I looked again at the window. No, it definitely says toasties. WTF? 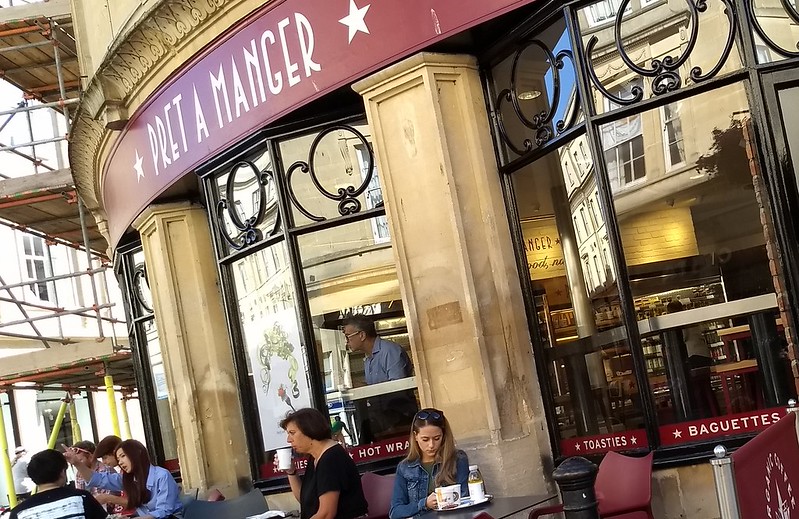 We eventually found some “all day breakfast baguettes” at another fine establishment. Greasy spoon breakfast wrapped in bread. Yum. Washed down with an appalling cup of tea. Double yum.

Via a deliberately circuitous route (we were exploring, not lost), we went back to the hotel, packed up our stuff and checked-out, arranging to leave our bags until later. 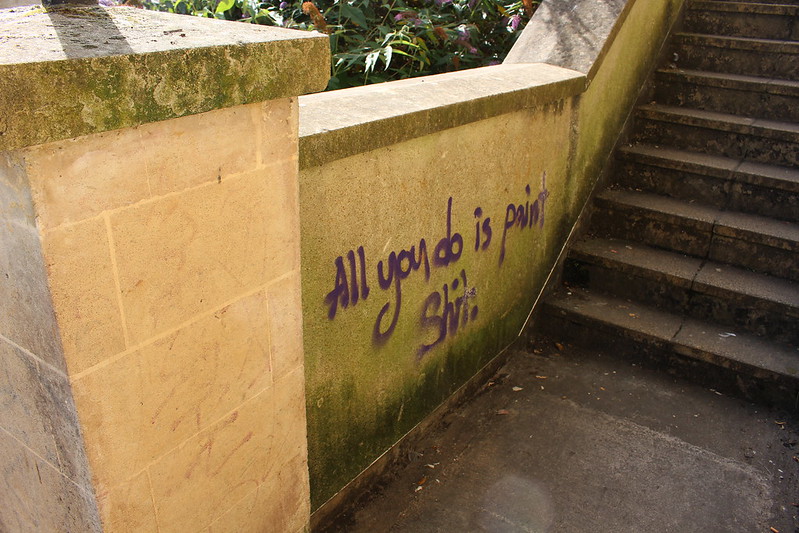 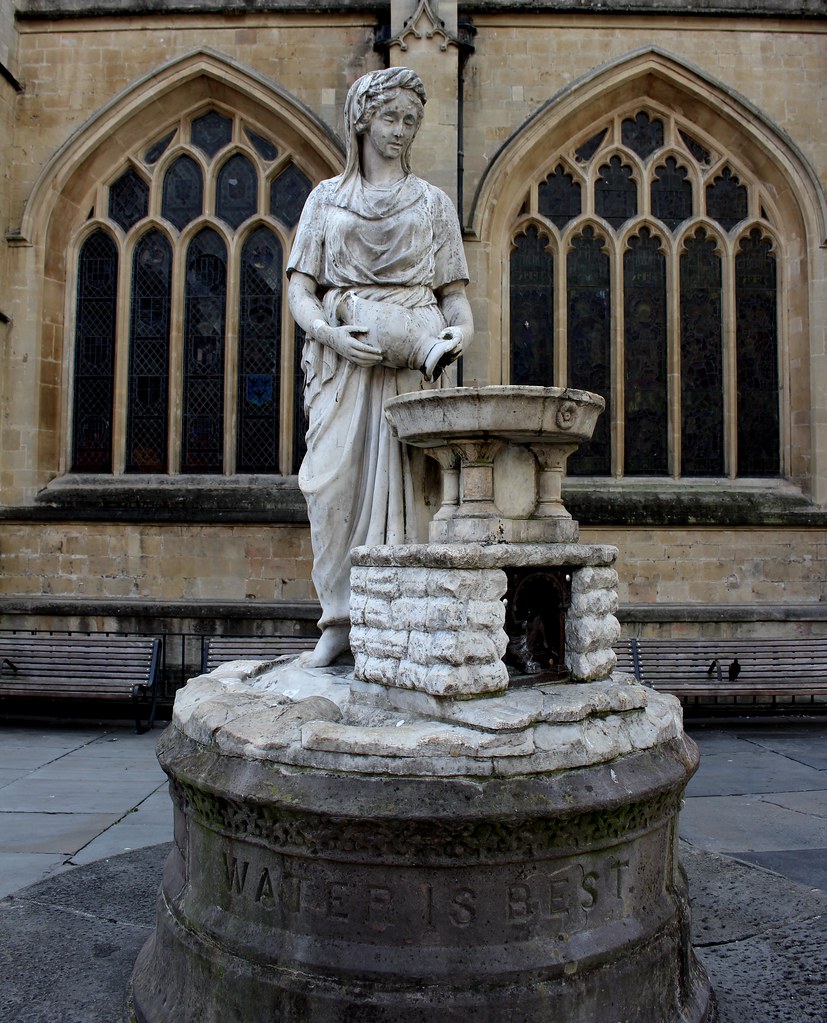 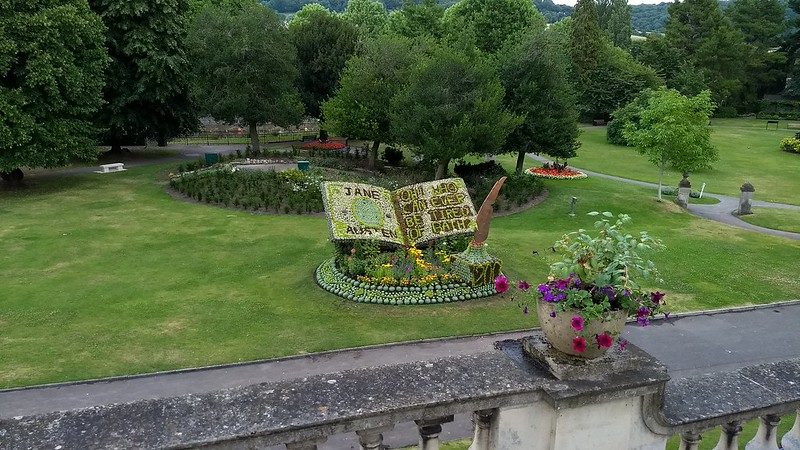 Time to meet the cousins! Outside the Roman Baths we met up with cousin S and husband N and toddler A. They’d come from their village about an hour from Bath.

We decided to head to the nearby Parade Gardens. It’s a park by the river which charges for entry, but consequently is very well kept. Entry is 1.50, but it applies all day.

The gardens have deck chairs, and we sat in them and chatted for ages, while A ran around and burned off some energy. I’d met S before, but that was last century, so there was a lot of catching up to do.

Lunchtime was approaching, and we started exploring the streets looking for options. N remembered a place he’d been to about a decade before. To his surprise, it was still there, away from the maddening crowds of the warm weekend, and they still served his favourite meal.

After lunch we wandered around for a bit longer and found some ice-creams and milkshakes, and back to the park for a sit on the grass and more of a chat.

Eventually it was time to head off, so we picked up our luggage from the hotel and headed to the station, heading for Taunton via Bristol.

The first train to Bristol was a short train, and packed, but it was only a short ten minute hop. (Its destination was Cardiff; it was the reverse of the train we’d caught two days before.)

Our second train rolled in, happily on the same platform, and had plenty of space.

We rolled southwest through Somerset, admiring the scenery and making liberal use of the WiFi.

I couldn’t help notice quite a few houses with PV solar panels. Clearly solar power is not just limited to places like Australia that have lots of sun. 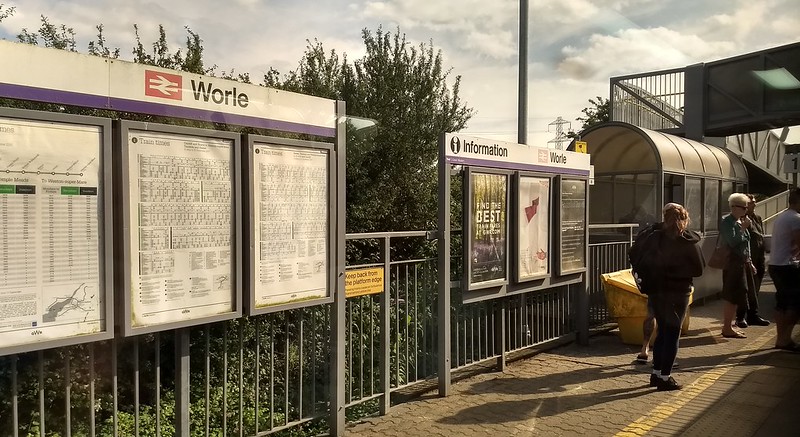 A bunch of towns passed by that I’d never heard of (Yatton? Worle?) though we also rolled through Weston-super-Mare, which I know was where John Cleese was born. At some the Train Manager cheerfully reminded us to be at the front of the train, as the train was longer than some of the platforms.

At Taunton, where the platforms are longer than the trains, we were met by Uncle K, who drove us to stay with my other Uncle H for a couple of days. We had a nice evening catching up with some family members we haven’t seen in years, and meeting others we hadn’t met before at all. 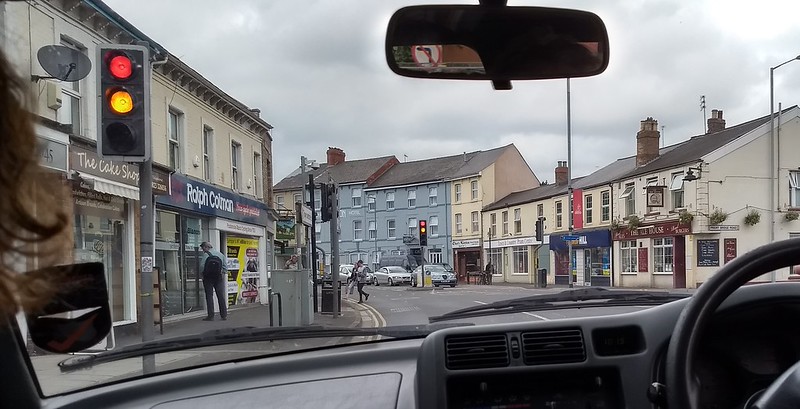 Monday was spent with family. The morning was taken up seeing my grandfather and setting up some group photos, and looking at old ones.

Here’s me with a portrait of my great grandfather. We got wondering if the Bowens all have high foreheads? 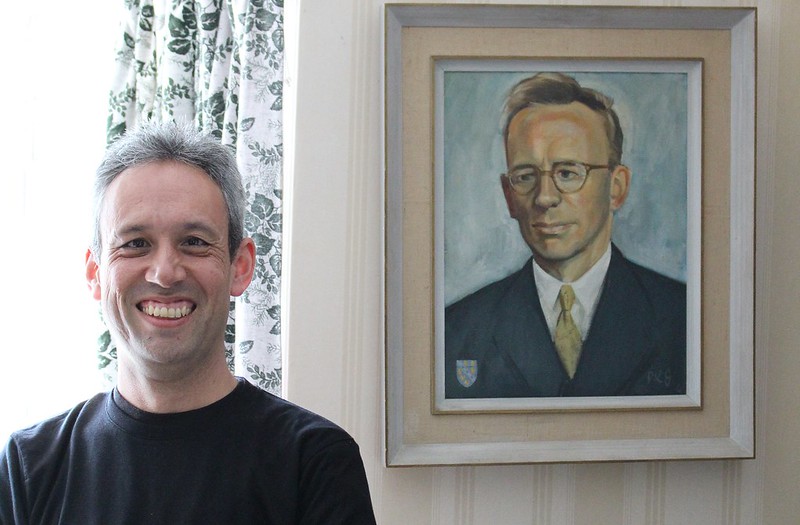 A memory from when I was a kid, and I don’t know where it came from, are these two lines from “Up from Somerset“:

Oh, we’m come up from Somerset,
Where the cider apples grow

As it happens, one of the nearby highlights is Perry’s Cider Mill, so we headed there for lunch, followed by a walk in the surrounding area, a village called Dowlish Wake. 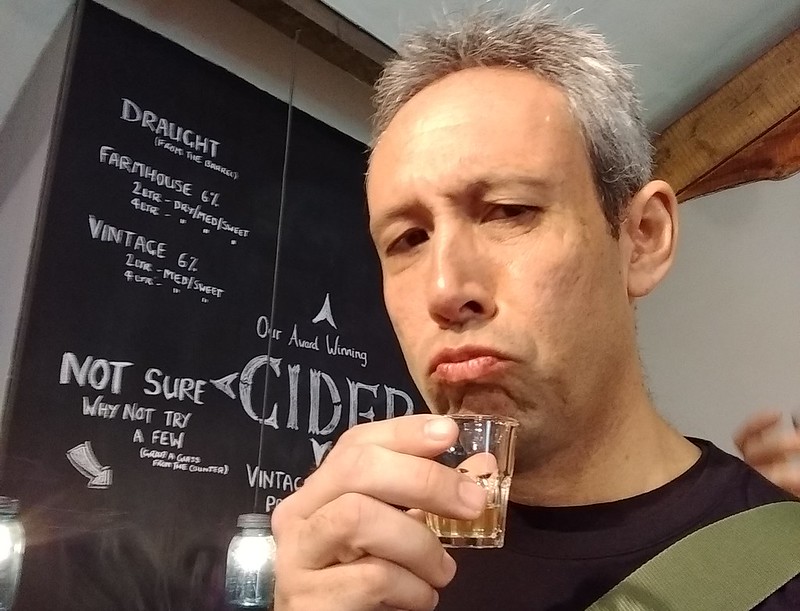 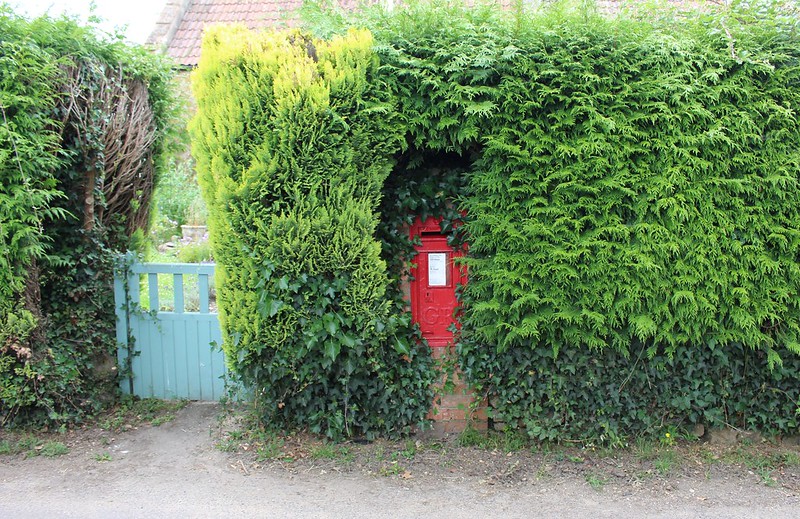 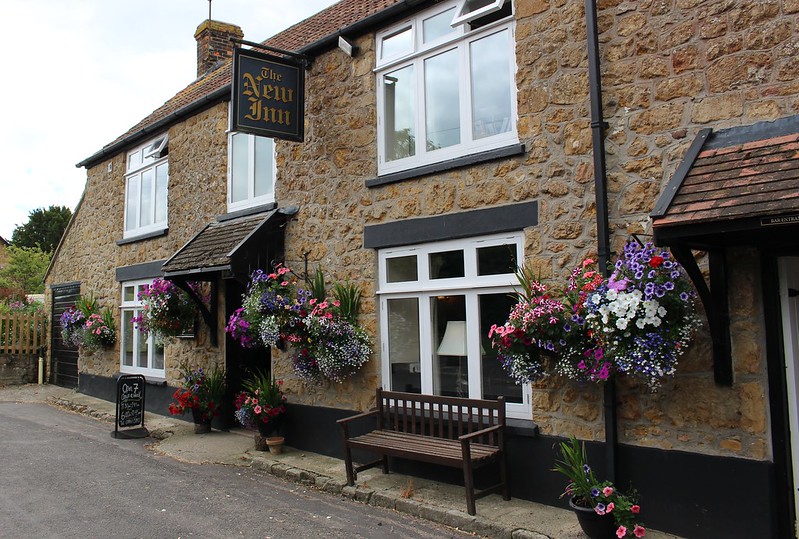 We walked past a pub called The New Inn. Apparently despite its name it’s about 350 years old. (I guess it’s like The New Forest, which is almost 1000 years old.)

Then a drive down narrow lanes to nearby town Crewkerne, and a walk around there. For its size, it’s a very busy town, or at least, some pretty bad traffic congestion. The local buses running only once every 90 minutes probably doesn’t help. 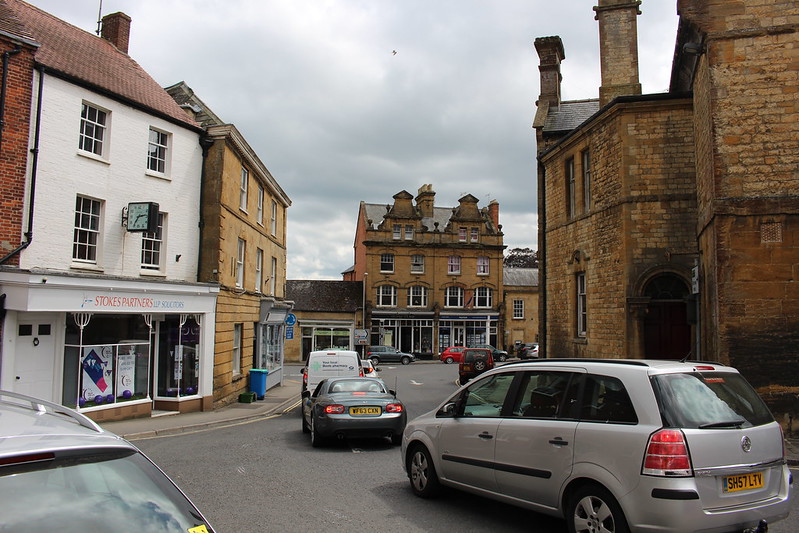 In an antique shop in Crewkerne, I noticed this old railway promotion (below)…

I wonder if it provided any inspiration for the Victorian Spirit Of Progress? Rocket was 1829, so this might have been 1929. Spirit of Progress started in 1937. But perhaps it was a semi-common phrase at the time. 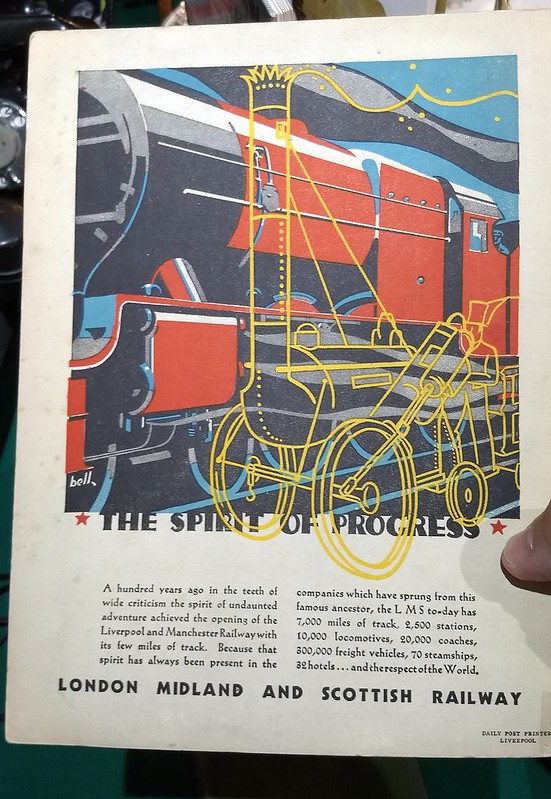 We finished up Monday with a big family dinner, featuring two uncles, two aunts by marriage, four cousins, and the four of us visitors.

On Tuesday we’d be on the move again, heading even further west.

One reply on “Family reunion time, and the mystery of the Bath toastie”

Your experiences with British tourism make me smile, I remember from my trips there in ’94, ’98 and 2001 tourist towns that are shut after noon on Saturday and all day Sunday, tourist information offices that don’t open when tourists are around, and somewhere I was where one day I could get breakfast and 8:30 and a snack at 7pm, but the next day they only opened from noon to 5pm because one day was “the summer” and the next day was not.