Friday morning in Cardiff, yet another warm sunny day — I was in danger of getting sunburnt. The locals all swore it was highly unusual to have this much sun — apparently “sunburn” and “Wales” are words not often found in one sentence.

Time to head elsewhere, but first, one more walk to Cardiff Bay to stretch the legs.

We walked past the BBC Cardiff studios, wondering if we might spot any clues as to the production occurring inside. No, of course not.

So, back to the house, we packed up our bags and walked to Cardiff Central station.

By the way, Cardiff Central, like numerous other British stations, has a platform zero… mind you, apparently it doesn’t have a platform five. I assume they’re very cautious about renumbering platforms when new ones are added. (Some Melbourne stations also have missing platforms.) 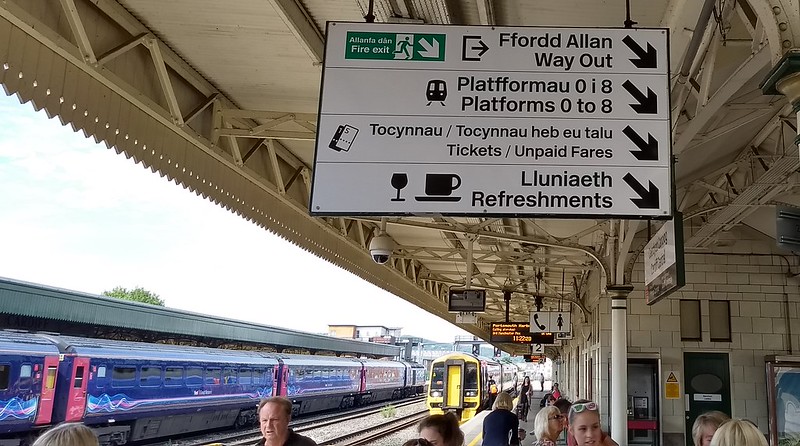 The train to Bath arrived, and a crowd surged forward to board it, including a school group. It seemed most people were going for a carriage with lots of “Reserved” tickets displayed on the seats. Hmm well maybe they’d reserved those seats.

But I noticed the train was relatively empty in the first carriage, so that’s where we headed, easily finding four seats to settle into and enjoy the scenery.

At Newport I spotted a freight train running through an adjacent platform, doubling as a moving billboard promoting freight by rail.

Our train zoomed towards England (to Portsmouth, to be precise), under the Severn, then into the main station of Bristol, known as Bristol Temple Meads, named after a nearby church. “Meads” is apparently a derivation of the word “meadow”, rather than a reference to alcohol. Hic!

Something I don’t think we see at home: from Bristol our train reversed when departing. Our front carriage was now at the back of the train.

We arrived at Bath Spa, a small but busy station. Why is it called Bath Spa and not just Bath? Because there used to be a separate station on a separate line elsewhere in Bath called Bath Green Square, and they didn’t want people getting confused. 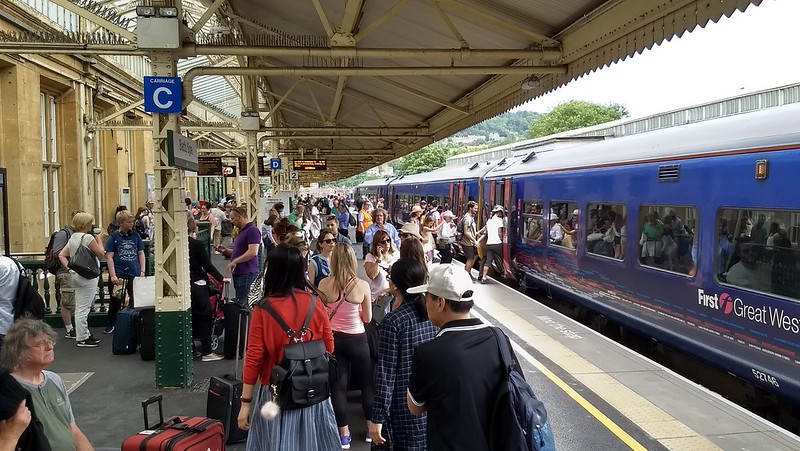 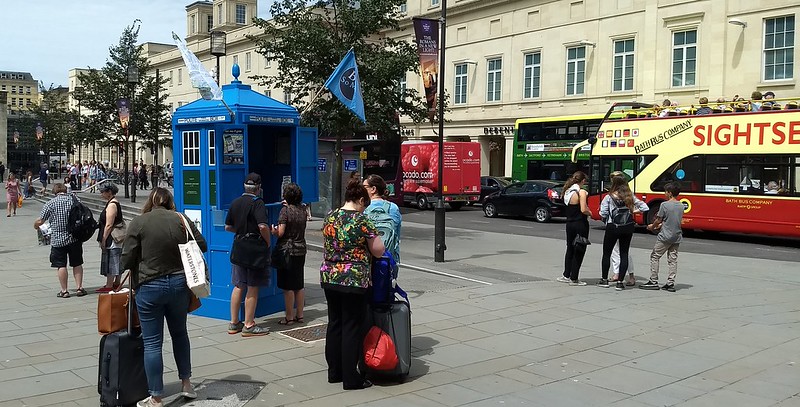 The streets were just as busy as the station. Clearly this was a tourist town. We rolled our suitcases towards the hotel and dropped our bags, as it was too early to check-in.

Backtracking, we found a lunch place on Pulteney Bridge, which is one of those stunning bridge structures you only see in Europe. 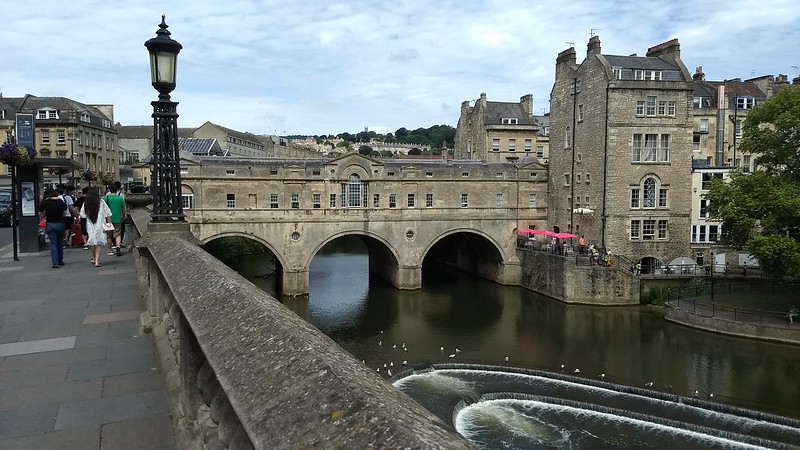 After some food we explored the busy streets of Bath. The whole place is just picturesque to the max.

There have been settlements in the area since the Iron Age, and the Romans developed baths around the natural spring (hence the city name, though they knew it as Aquae Sulis), but what’s most immediately striking is the architecture: near-identical facades using the local stone, built mostly in the 1700s, and largely preserved since then.

Yes, it’s touristy. But the rapid expansion of this style of building is actually due to tourists — as the spa waters attracted visitors, accommodation needed to be built to cater for them.

It’s just beautiful to look at, and proof that medium-density buildings don’t need to be ugly — though of course you’d struggle to build anything quite this aesthetically pleasing today. 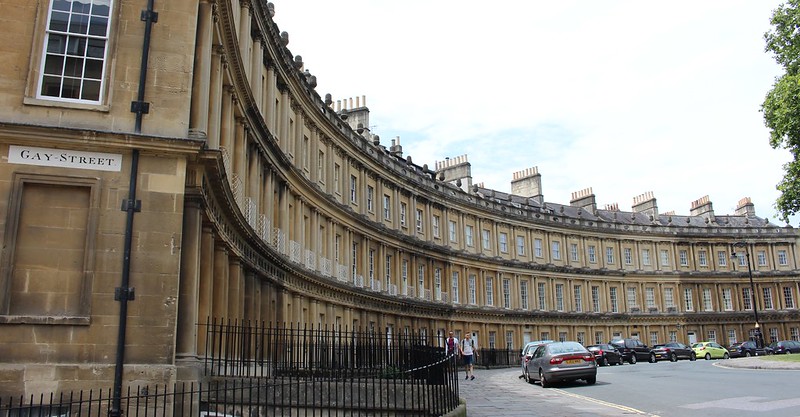 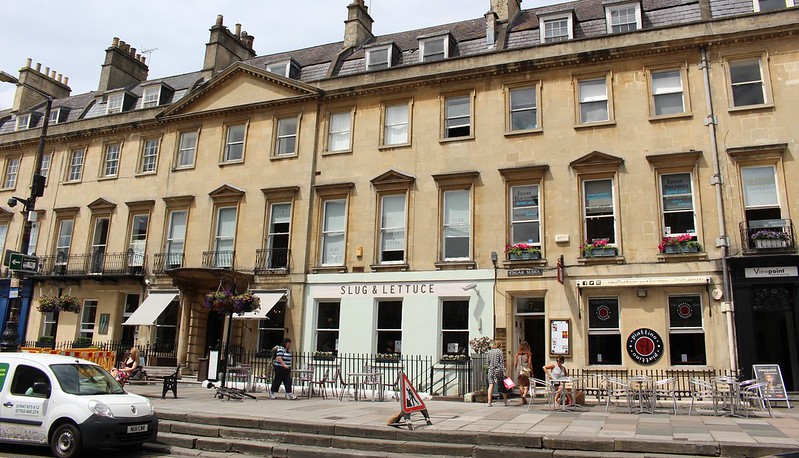 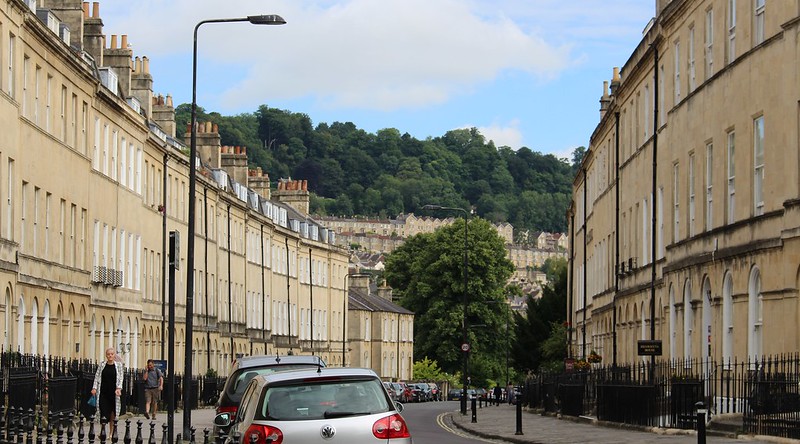 What’s doubly amazing is that you look to the distant hills and see the same style, so it’s not confined to the centre of the town, though there are some spots out of view where less attractive structures such as big box stores, large car parks and other abominations have been placed. 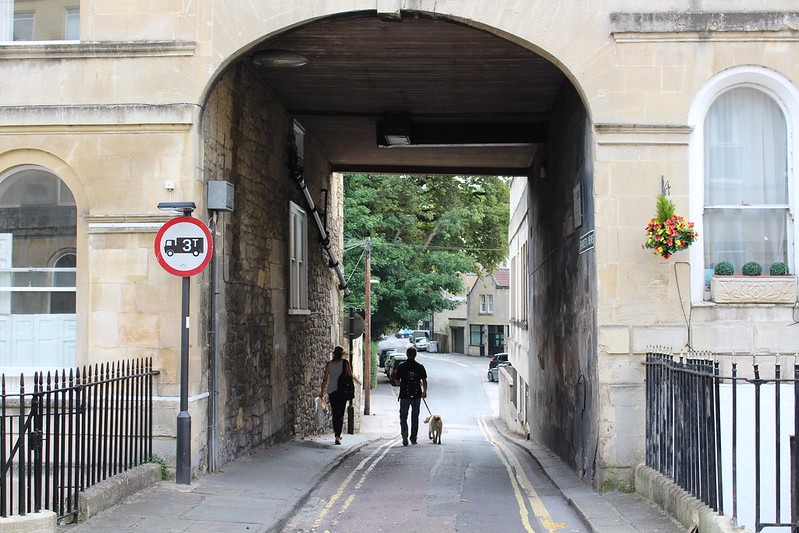 In the past for hotel bookings I’ve used LastMinute/Wotif/Expedia — they’re all the same company, showing the same results using slightly different fonts and icons… This time around I wanted to book a double room and a twin room, and these sites don’t make it easy.

I discovered booking.com, which does let you easily search for different room combinations. This is so amazingly useful that I’m surprised the others haven’t got this feature. I’ll stick to this site until they do, at least when I need a mix of room types… mind you, having got home I’m now getting near-constant promotional emails encouraging me to book another hotel in Bath. Surely they must have the intelligence to know that’s unlikely to happen any time soon.

So we headed back to the hotel to check-in. I’d booked this hotel for price and most importantly, location – I really like to be walking distance to the city centre and the station, it makes it so much easier.

Location was good, price was good. Facilities a little basic, but okay. And it was in a traditional Bath stone building.

But there’s always a catch, right? In this case, it was heat. After a warm spell, the hotel was very hot in the upstairs rooms, and the windows wouldn’t open very far to let in the breeze. Air-conditioning? Hahaha… no.

We found two fans in one of the rooms we booked, but when we asked if there were any more, the otherwise very helpful staff said no, they weren’t allowed to give us fans. WTF? In our case easily solved as we moved one of the ones we had to the other room, but you have to wonder what was going on.

At least there was WiFi. It’s officially only available in the lobby, but we managed to get it from one of our rooms on the floor two levels up.

I must say, the TripAdvisor reviews are pretty cruel. But I guess it’s the most annoyed people who bother to leave reviews. Ultimately, Bath is an expensive tourist town, and this was an affordable option near the city centre. 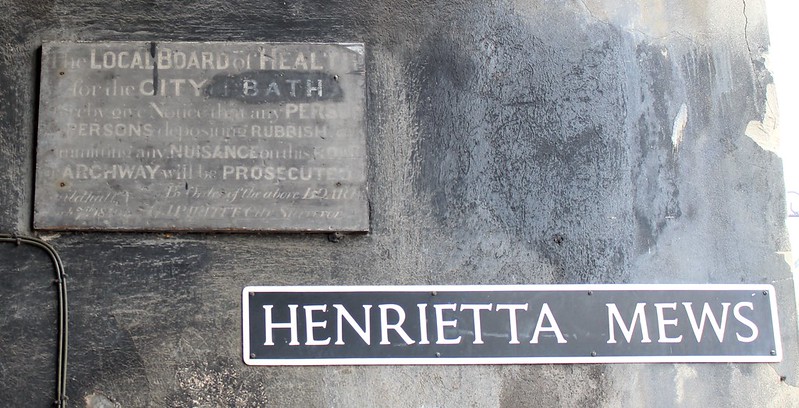 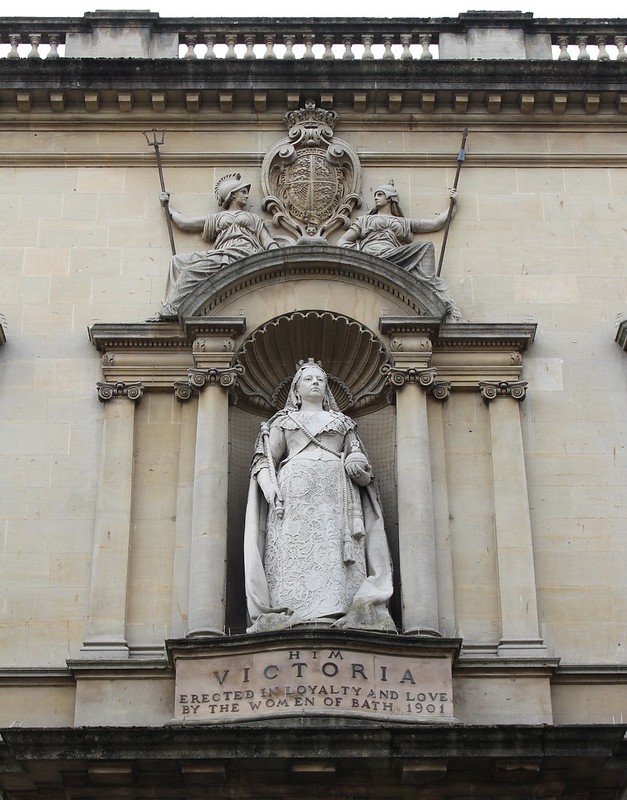 We headed out again, and I found an ATM (oh sorry, a cash point) to get some cash. This was not a success – the machine went through the motions, but at the end of the transaction gave me neither the card nor the cash. Fortunately the attached bank branch was open at the time, and I was able to plead with the staff to retrieve the card, which they did. Being without an ATM card so far from home would not have been fun.

Memo: don’t use another Natwest machine, at least not when the branch is closed. I found another bank’s machine and it worked perfectly. 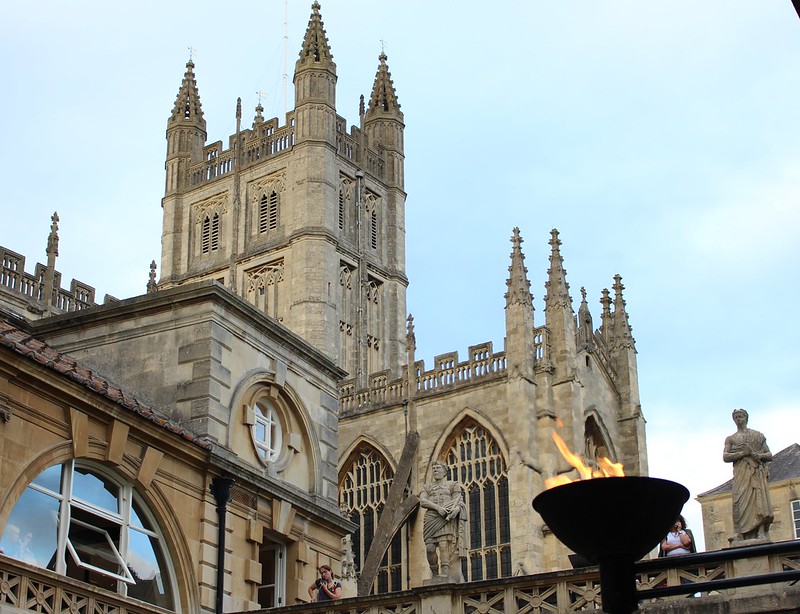 Exploring some more, we found ourselves in Bath Abbey — beautiful inside, but we also bought tickets to climb the tower.

It’s steps all the way up of course, of varying steepness and levels of comfort and spaciousness. I couldn’t help notice that the ladies in the gift shop who sold us the tickets were of senior years, but the guides (who climb up and down all day) were somewhat younger. It must be a good aerobic workout.

On the way up we got to see the clock from the inside, and the various bells, but by far the highlight was the view from the top, which was spectacular.

And by the way, if ever you want proof that a phone camera is out-done by a proper DSLR camera, this picture in particular should prove it. See it larger in a new window. 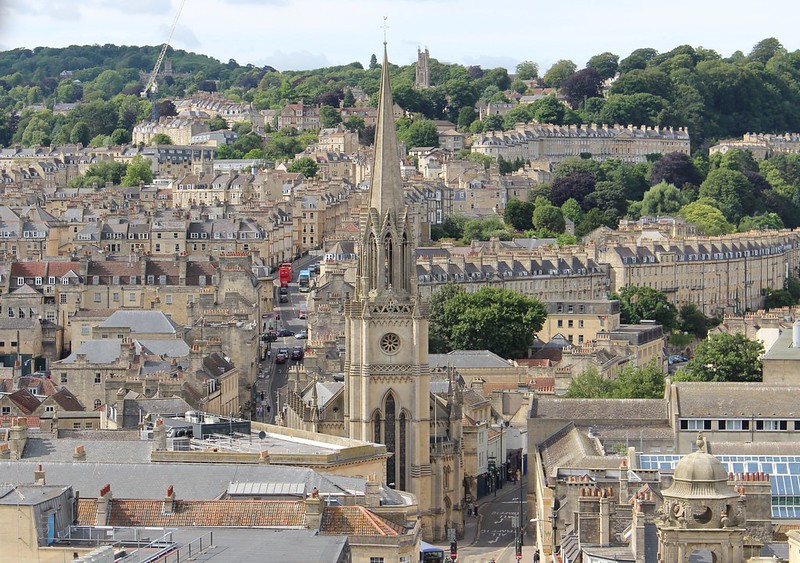 Back down the bottom, we kept exploring.

We wanted to look at the Roman Baths, but they were very busy, so we left it for later, instead roaming the streets, continuing to admire the architecture. 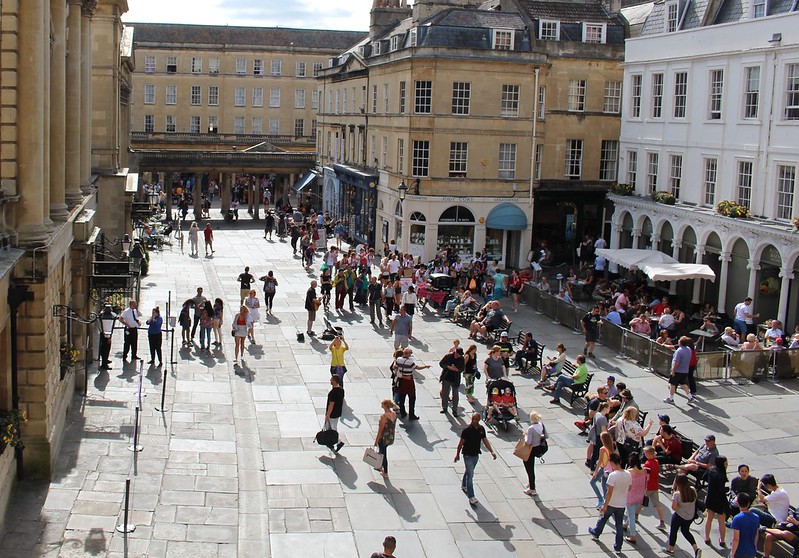 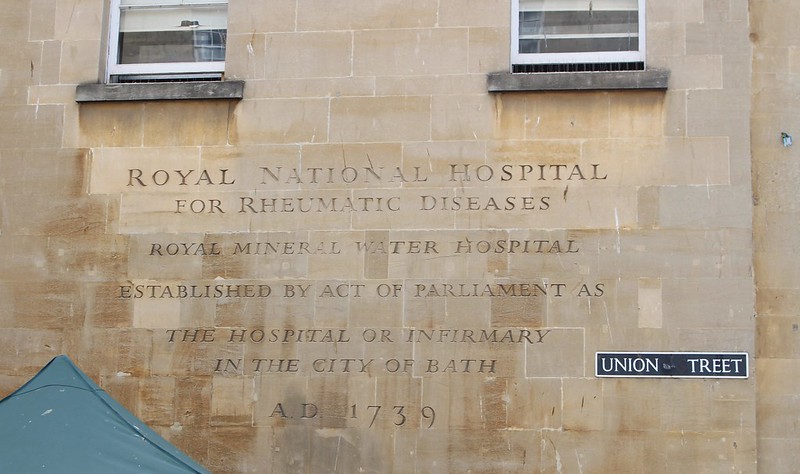 I found a retail outlet of Charles Tyrwhitt. This is the mob who sell a lot of mail order shirts in Australia, and ever since I bought some (they’re quite good) have bombarded me with emails and paper catalogues every few weeks.

It’s like they expect you to buy shirts, lots of shirts, every month of the year. Guys, I love your shirts. But I don’t need any more shirts right now. 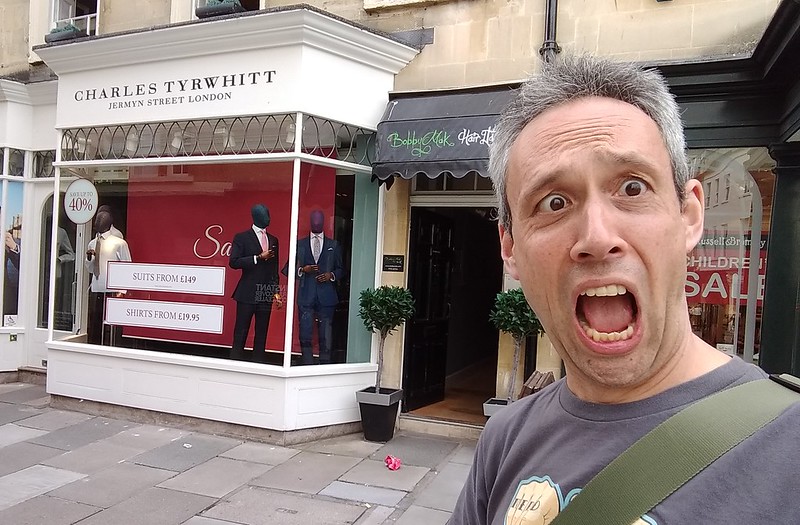 Queen Square is a small oasis of calm near the town centre, with an obelisk in the centre built in 1738 to honour the Prince Of Wales. We also found Royal Crescent, which has the Bath picturesqueness dialled up to eleven — I’m guessing the homes here don’t come cheap. 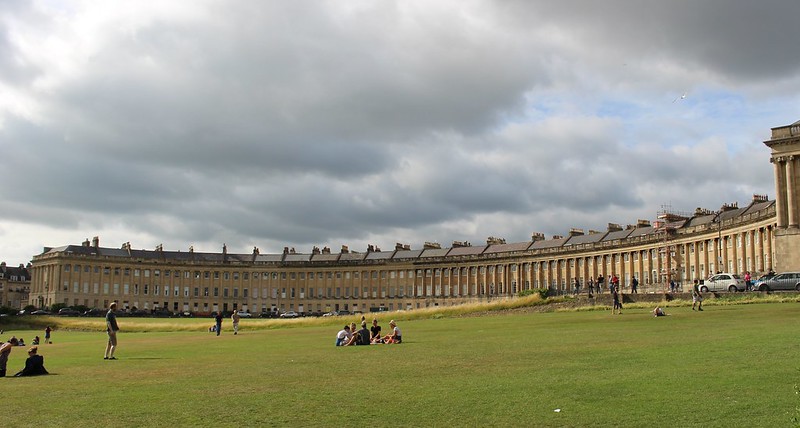 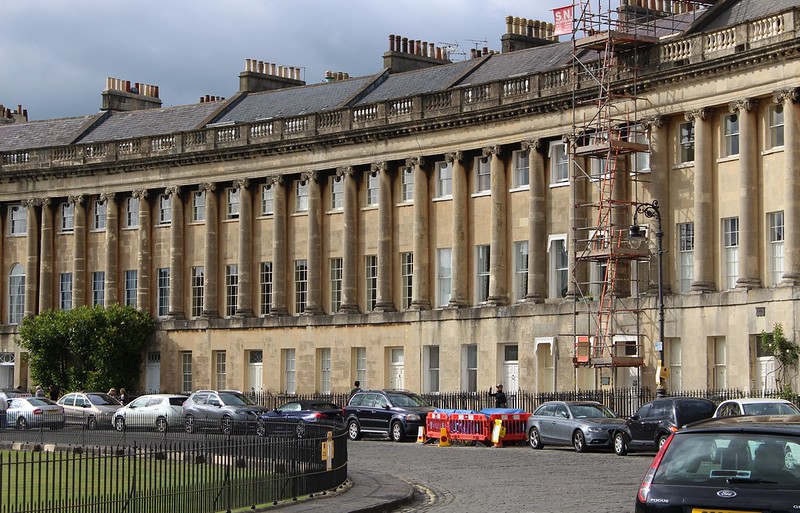 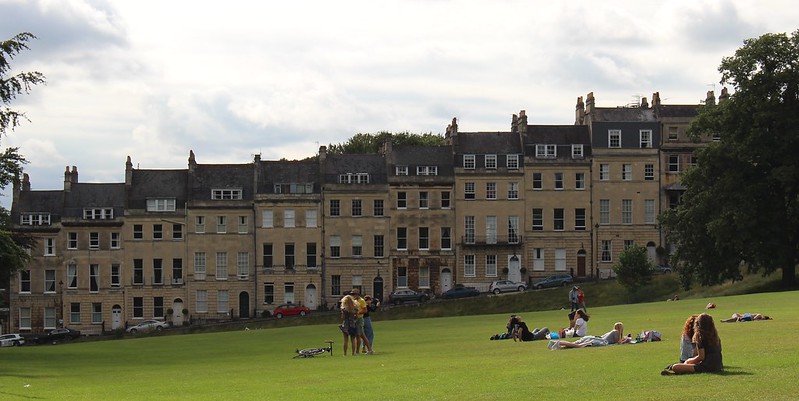 And we encountered a squirrel, of which I took far too many photos. 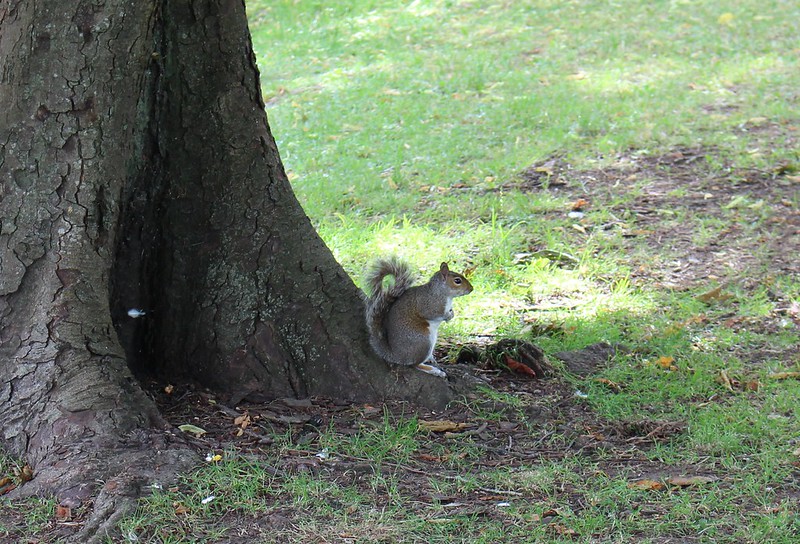 Time for some dinner, and we found a pub to settle into, then a quick walk along the riverbank (more of that tomorrow), and back to the hotel to rest.

One reply on “Time for a Bath”