Time for another in my monthly series of photos from ten years ago… something of a bumper crop this time.

Let’s start with a view over the city from Quarry Park in Footscray. Apparently the Melbourne Star observation wheel had been under construction since 2006, but I can’t see in anywhere here.

I can’t actually see any few cranes in the photo, but in the last ten years, the skyline around central Melbourne has certainly got more crowded. 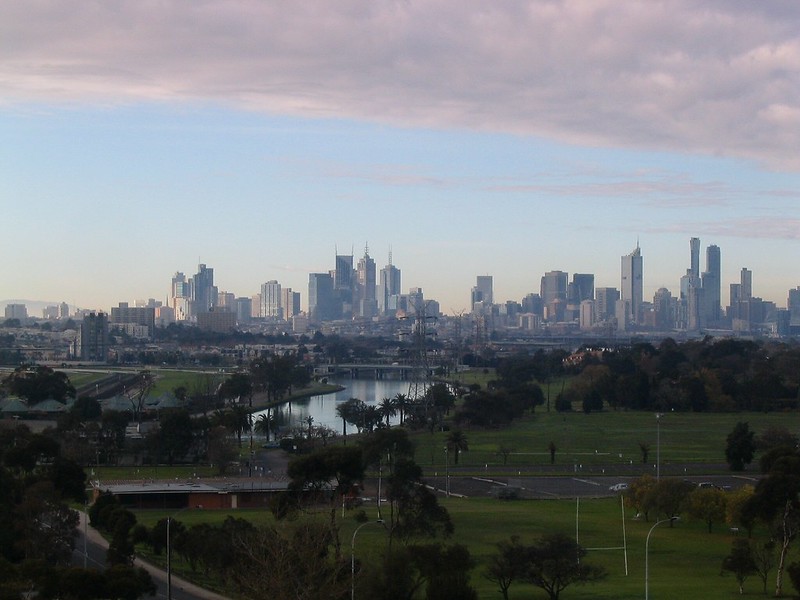 Nearby to the spot where the above photo was taken, the Edgewater development was taking shape, and being promoted, of course. I wonder how many people actually moor their boat here? 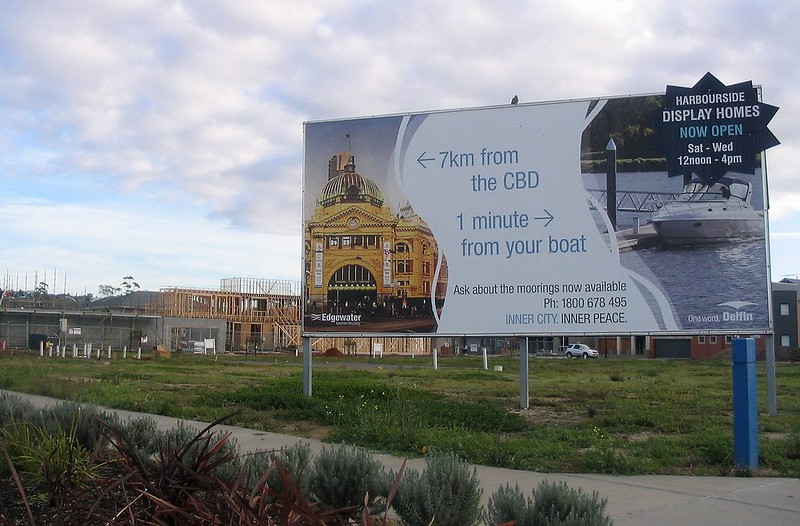 I suspect I was waiting for a train on the evening on the 8th of June, as I snap quite a few photos around Southern Cross. 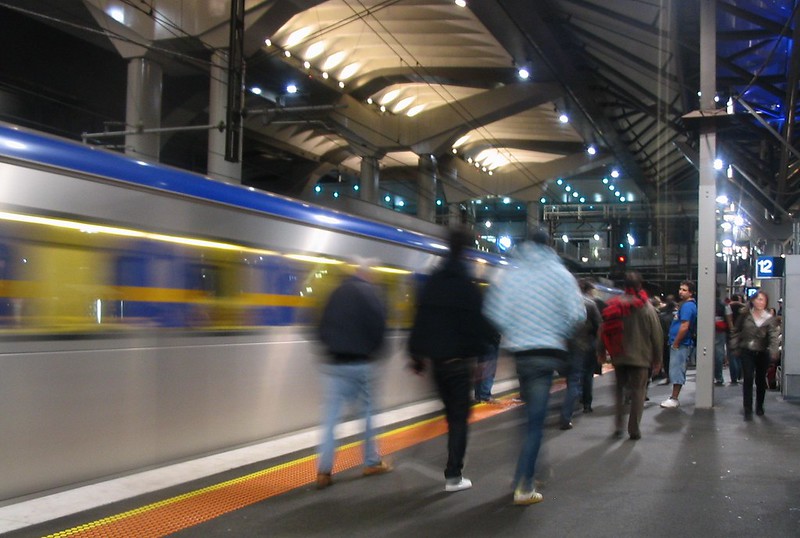 At the time the rebuild of the station was relatively new. This bloke seemed to be setting up the platform screens (since replaced by something more beautiful, though many of the screens are now located behind pillars!) 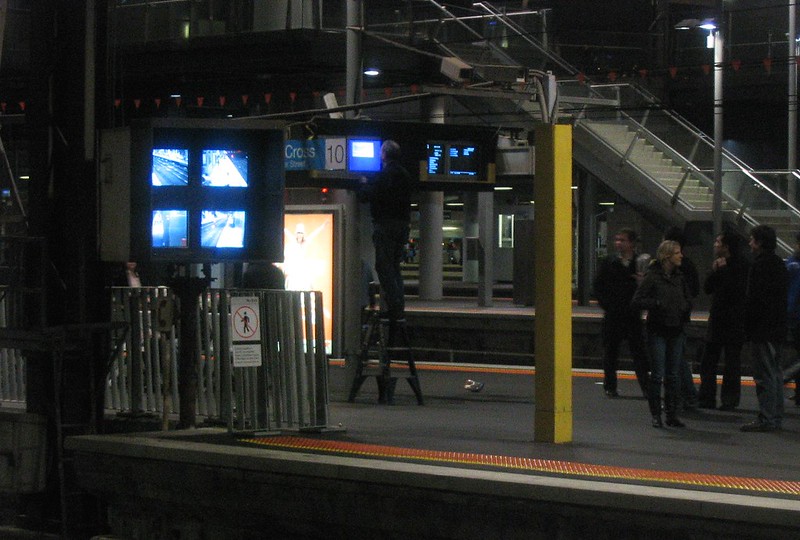 Evidently the 15th of June was a foggy morning. This is Bentleigh station, well before it got rebuilt below street level, and with Hitachi trains still running. Some naughty bloke is riding a bike along the platform. Unwise. 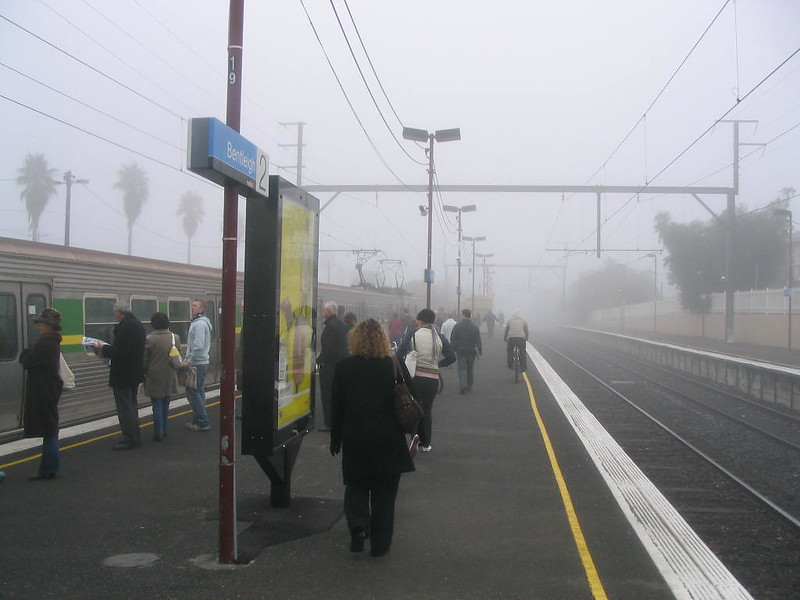 Later the same morning, pretty hazy in Elizabeth Street, just north of Collins Street. Since then, massive block-long tram platform stops have been built here, though as of 2017, only route 19 has (some) low-floor trams. 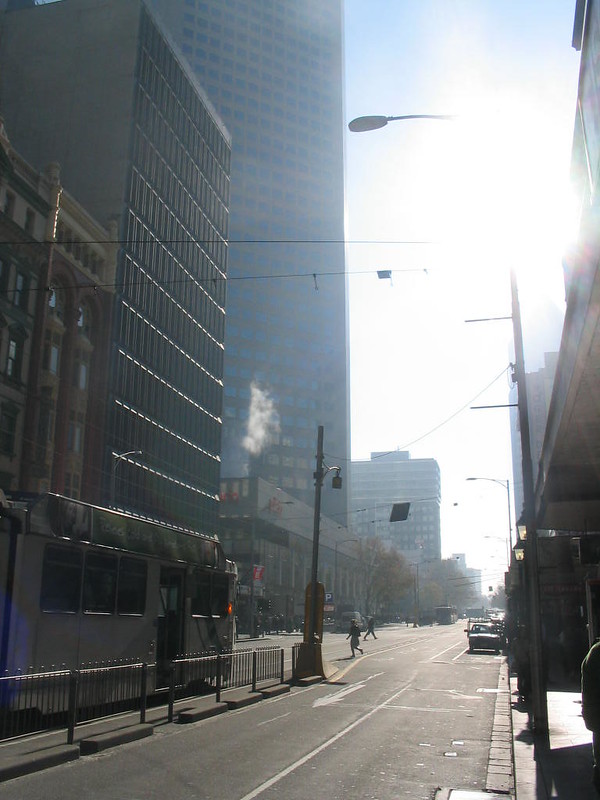 Hazy at lunchtime in Swanston Street. This area has been remodelled, also now with tram platform stops. 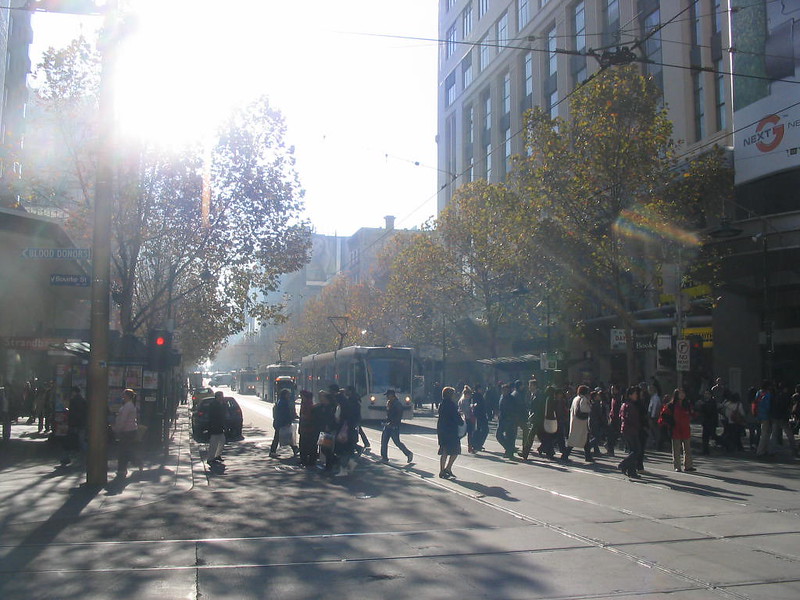 Back at Southern Cross, I quite like the blur effect of this Connex-liveried Comeng train arriving. 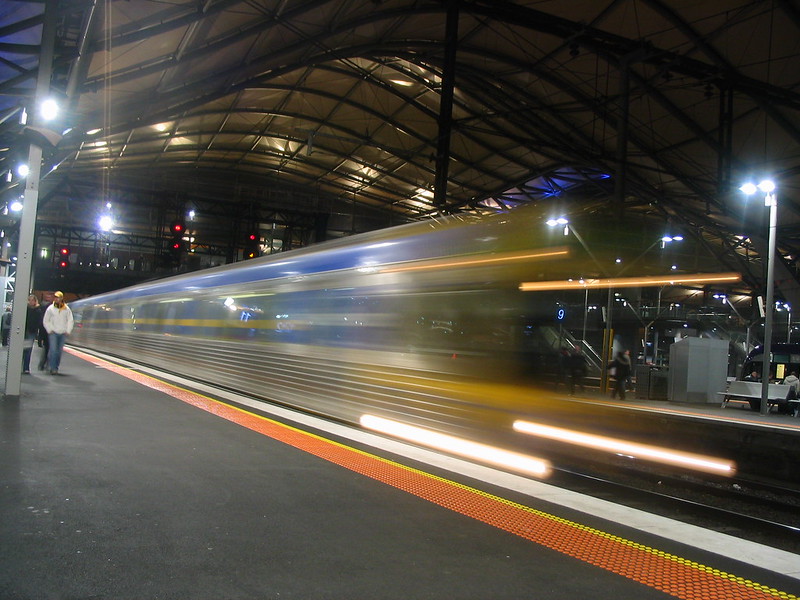 I must have been mucking about with long exposure times. Looking across the platforms to an X’trapolis train. 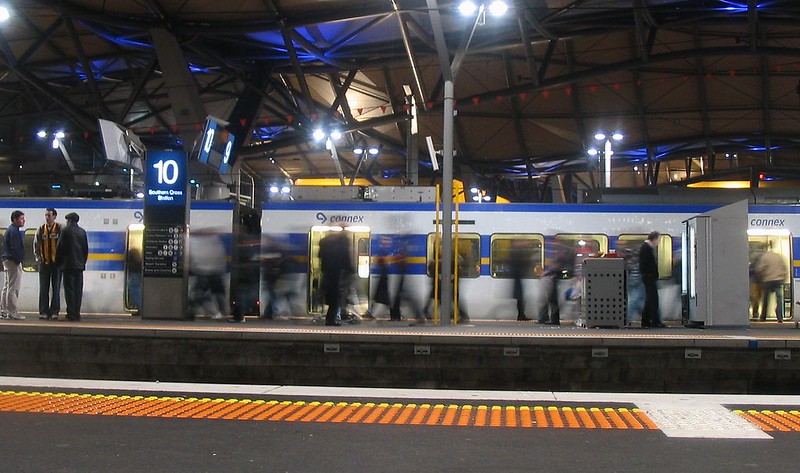 Just this week they announced that A-class trams will be getting internal stop displays, but back in 2007, a similar system was being trialled on this Z-class tram (number 178). 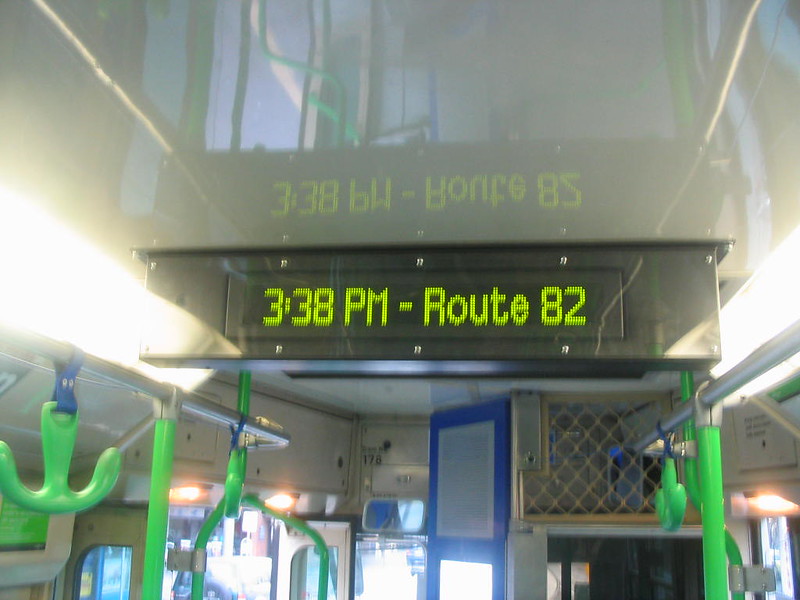 …it also included this internal display, which hasn’t ended up being rolled-out. 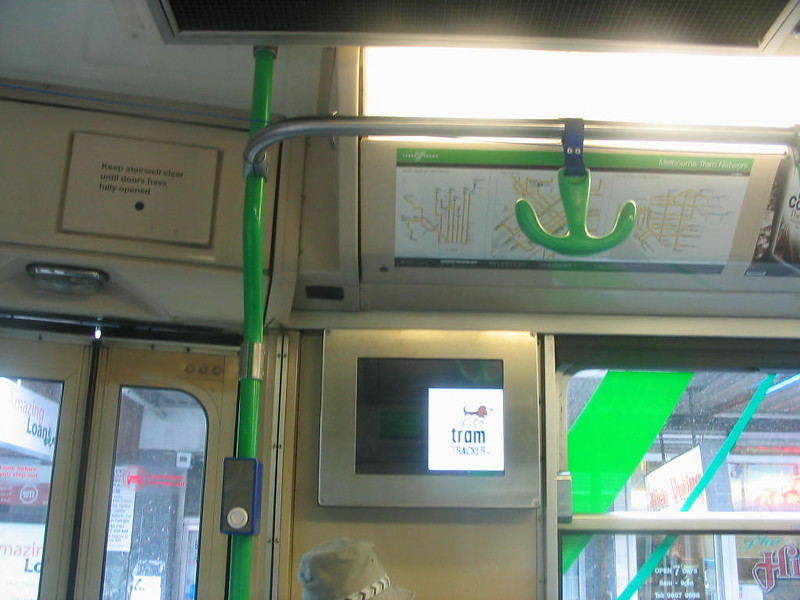 …and the external LED displays must have been new, or I probably wouldn’t have bothered to snap the outside of the tram. It now seems unlikely Z-class trams will get the full suite of displays, as they’ve started being phased-out as E-class trams are deployed. 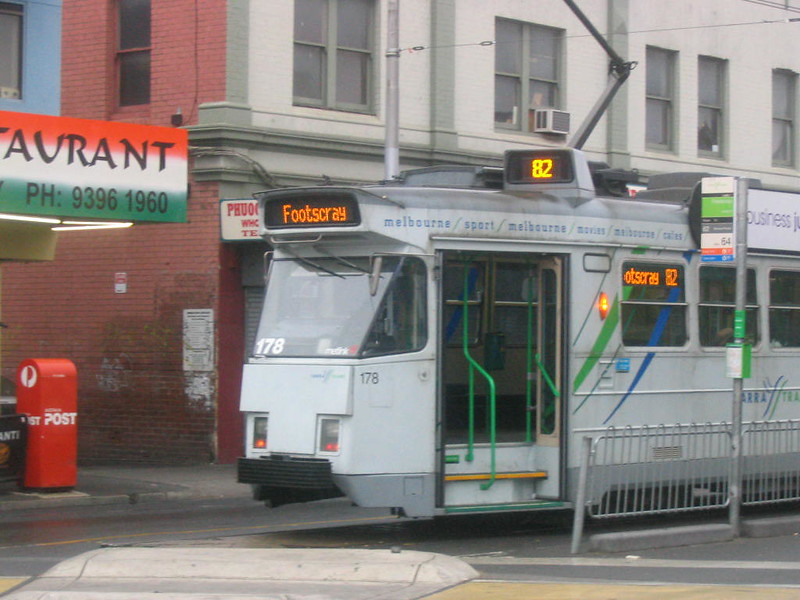 Some kind of advertising promotion at Richmond station. Given crowds at this station these days, I wonder if they’d allow such markings on the platform today. 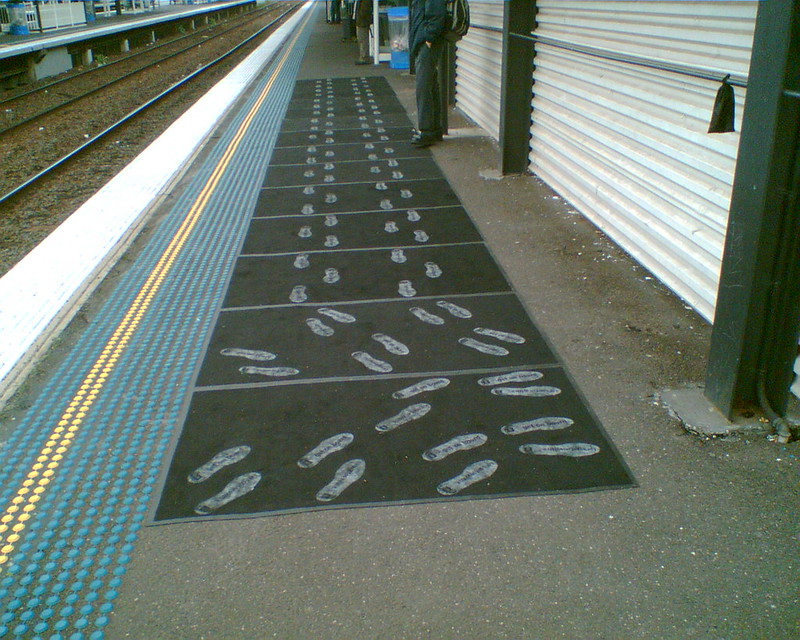 At Windsor on Dandenong Road, more platform stops were being built. 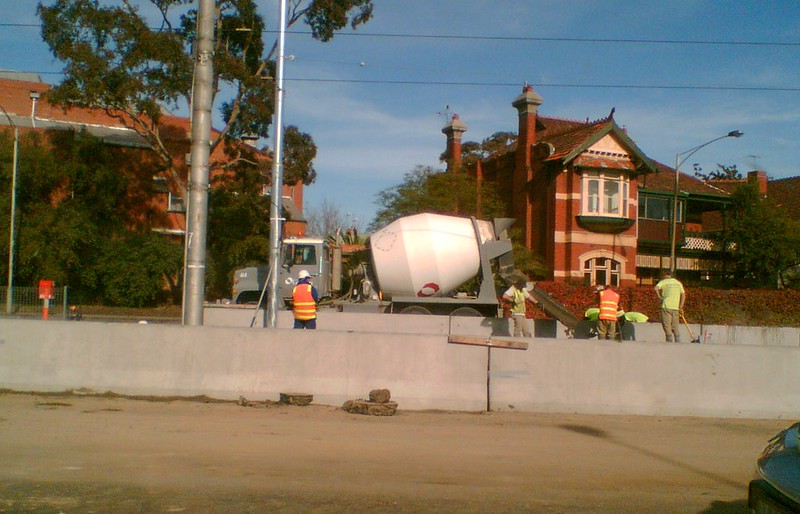 East St Kilda. This lane between two houses on Alexandra Street is probably meaningless to you lot, but holds special significance to me. It’s where I learnt to ride a bike. 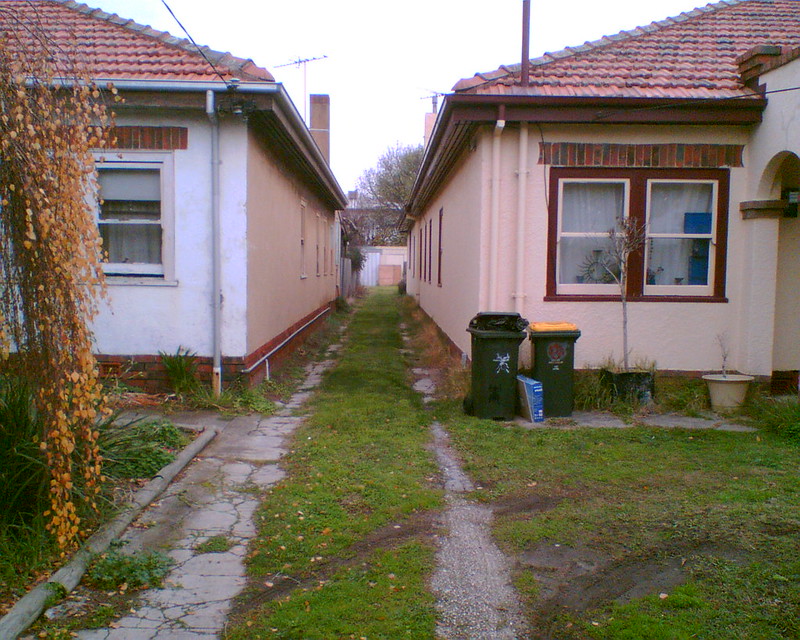 I’m not sure why I snapped this picture of a Darrell Lea store in Swanston Street, but it’s since disappeared, along with most of the other stores. 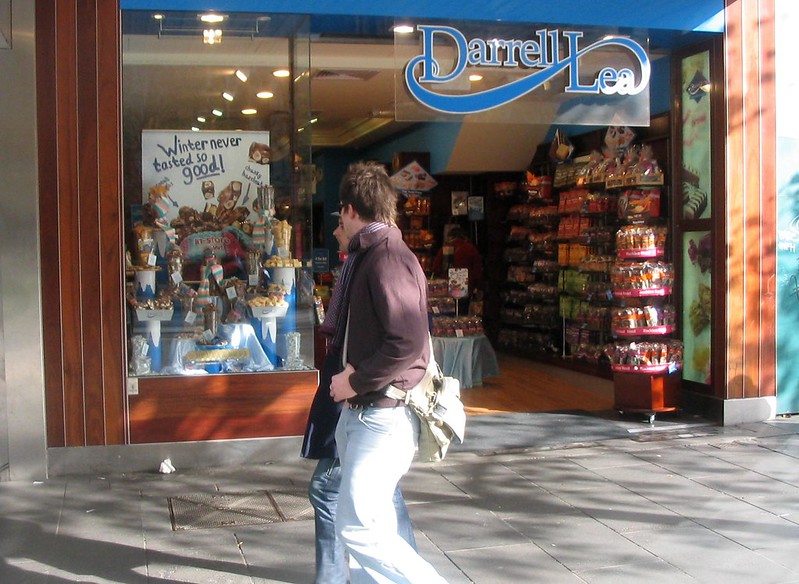 Who remembers The Choir Of Hard Knocks? Evidently on the 22nd of June they had an event in the Degraves Street subway. 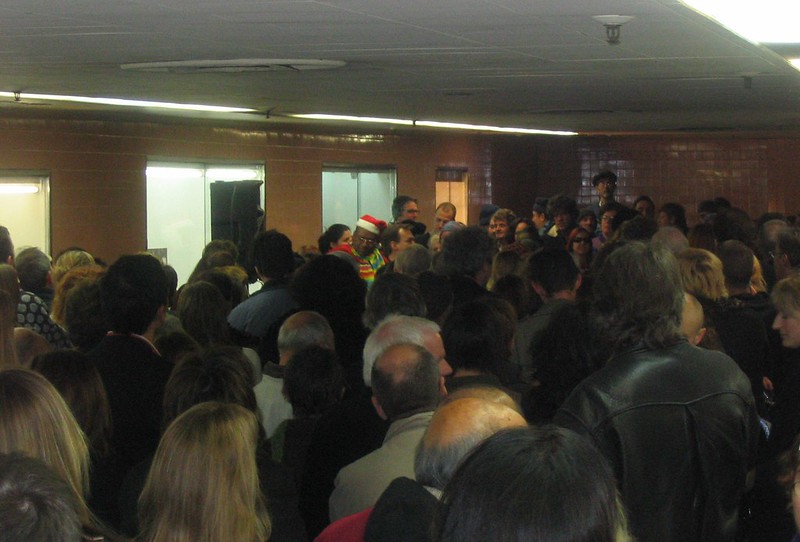 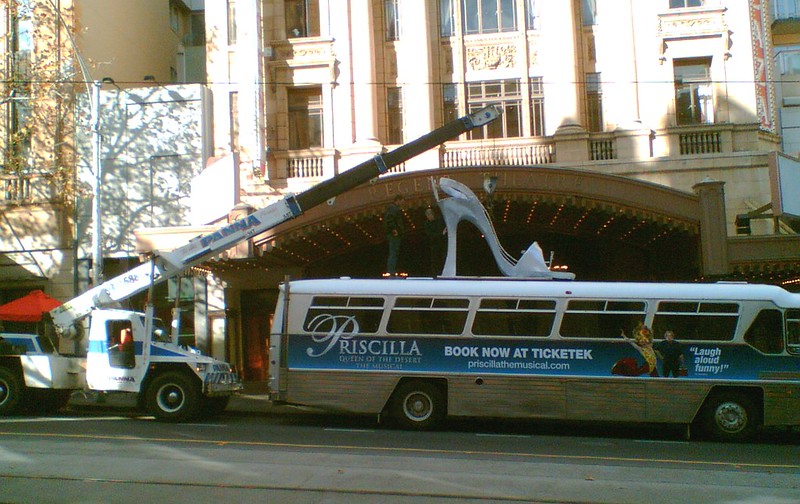 Not only is that bike rider barely on the correct side of the yellow line, near maximising the chances any rightward fall would have landed them head-first on the tracks, they are (presuming it is a morning peak photo) on the express train side of the platform, where there are frequently express trains running through usually at (I presume) most to all of of 80km/h.

This makes me wonder.. I have never seen Route 82 with anything but a Z-class tram. Is any other tram capable of navigating through the tight streets of Footscray? Or are they only using the Z-class trams on this route because of capacity reasons?

@Arfman – any tram in the Melbourne fleet can head to Footscray – even the E classes headed out there on a test run:

Thanks Marcus. That is indeed interesting to see.

Re #82, mostly Z3 class, although I do remember Z1 and even the W class decades ago. Today, B class have been known to do the school time runs. At least the have been in the past.

In respect to the current Z3 class withdrawal, they are not being removed from the system. Rather, from what I was told, they are going to rotate them around on a three weeks on, one week off, then two weeks on and two off for a while. The idea is to get a small ready fleet.