On Sunday the Coalition pledged to upgrade more lines to trains every ten minutes off-peak.

Here’s the Channel 9 story – have a watch:

FIRST ON 9: The Coalition will go to next year’s state election with a policy to increase Melbourne’s train frequency. @andrew_lund #9News pic.twitter.com/kTsnGTvILQ

There’s not much detail yet — nothing on David Hodgett’s web site that I can see (though it’s a bit broken; you can’t see news items beyond the first page). Nothing on Matthew Guy’s web site, nor the Liberal Victoria web site.

But from Hodgett’s quotes in the story, what they appear to mean is 10 minute services on every line where the infrastructure supports it – which is most of them.

This would have huge benefits across the rail network, and for the PT network as a whole, by making anywhere-to-anywhere trips much easier by cutting waiting/interchange times, and help grow capacity and patronage without putting extra stress on peak hour.

Given increasing travel (and traffic congestion) at what used to be seen as “off-peak” times in the middle of the day and on weekends, as well as our growing population, this is just what’s needed.

And it would bring us up to the type of train service offered in most big cities around the world.

It’s not actually that radical. PTV and Metro already have an unfunded plan for just such a rollout. It’s really a matter of timing. 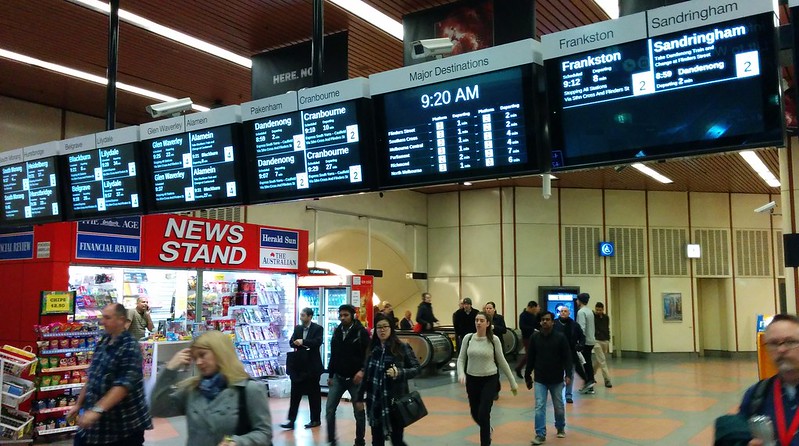 For such an obviously good idea, the cynics really came out on this one — perhaps far moreso than if Labor had pledged it.

The Libs never do anything for public transport!

There’s no capacity for this!

This does not put stress on signalling, track capacity or the train fleet, because it’s off-peak, not peak. It does not need major infrastructure such as the metro tunnel.

It needs extra drivers, and extra maintenance capacity, as well as other running costs such as power.

No it won’t. We’re talking about fewer trains than in peak, and at times of less traffic on the roads as well.

It doesn’t cause huge problems on the lines that already have it. And in fact improving train services like this is likely to get more people out of their cars, as long as they’re actually promoted to non-train users (which is rare).

There’s only one remotely sensible argument I’ve heard against doing this now (rather than later), and it’s this:

Is it the right time to be bringing lots more patronage onto the off-peak/weekend service when there are so many infrastructure projects in progress? Level crossing removals on most lines, track and signal upgrade works, works to enable new trains in some cases. It adds to stress on the replacement buses and doesn’t provide the best environment to win over customers permanently and produce ongoing travel pattern changes.

I think that’s a fair point, but there are likely to be works such as level crossing removals going on for decades, as hopefully this will be an ongoing program.

Perhaps one way of playing it is to implement frequency increases as lines get their worst level crossings removed. For instance:

In fact, frequent trains can make life a lot easier when bus replacements are in operation. Buses are sometimes delayed by heavy traffic, and train connections not held. If the train is missed, it’s a lot better if the next one is only ten minutes away. 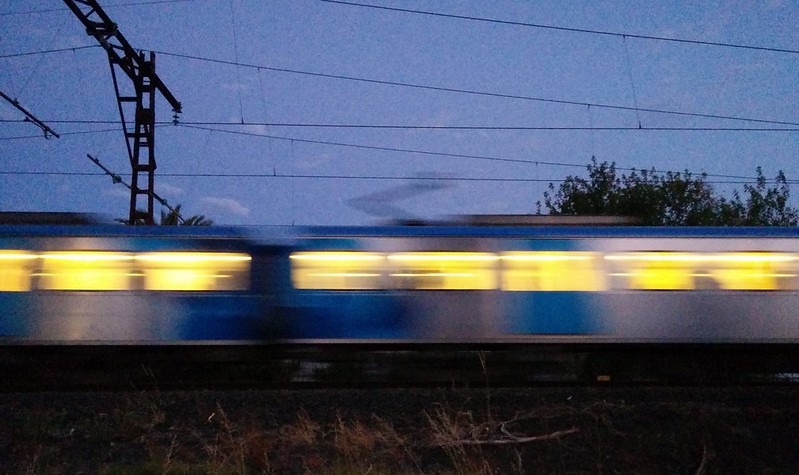 In the news clip, Labor claims to have introduced a large number of services since 2014. Not so. Barely any in fact.

I’d love to see this policy implemented. But before they definitely win my vote, I’m concerned as to what else the Coalition will pledge in their policy platform. They still seem obsessed with the disastrous East West Link.

Nonetheless, this is a great policy pledge from the Coalition. If Labor are sensible, they’ll match it.

16 replies on “The State Coalition pledge for 10 minute trains”

The Werribee line still has a 40 minute service until 10:05 am on Sundays. This service provision is unacceptable for one of the fastest growing regions in Victoria, even 20 minutes between trains would be acceptable. It should have been changed at the completion of regional rail but we are heading for 2 years without any significant improvement. The Werribee line had more frequent off peak services before 2011 but they were removed. There is no reason (other than politics) that service increases have not materialised.

Some good suggestions. Doing it after the implementation of LXR on any line would amplify the apparent benefit.

In any case, we need to get on to hiring and training drivers imminently.

It sounds great, but like their promise of airport rail last time around I would take it with a huge pinch of salt. The coalition have a habit of forgetting their public transport promises. And EW Link would almost definitely be back on.

Meanwhile, Dandenong trains are fairly busy during the middle of the day, despite already having 10 minute frequencies. I took one today about 1pm from Richmond and there were more people than seats, and this was without any delays to previous services.

Without wanting to sound like a broken record, I’ll again bring up the fact that we’re still waiting for that post-RRL opening timetable nearly two years later. No shortage of enthusiasm for road widening though..

Personally I would trench Sandringham building a two platform terminus and sky railing Hampton, Brighton a Beach and Middle Brighton

I’ve looked at Sandringham previously; in my view the easiest solution would be to build a new elevated station on the current site, and pay for it (and the separation of the Abbott St level crossing) with a 15-storey development. That would pay for itself in about ten years, assuming full occupancy. Ground level would be commercial (retaining the current station façade), level one would be the platforms, and the rest residential with parkland on top.

I use the Werribee Line every school days.

Although the number of services could be improved during off-peak hours, it is considered ridiculous to make a connection at either North Melbourne or Footscray as the connecting lines’ service may leave 30 seconds early to the scheduled departure time. It is always a race against chance and luck or otherwise wasting 20 minutes waiting for the next service.

I’ll meet you half way there….

Not hard to compare between the two parties but if we were to compare
**Service level,
Rewind your watch to Kenneth era, do you still remember no first train on a Sunday till
1030/1040am on some lines?

**Ticketing system and fare
Metcard….what a wonderful system it was!!

**Many dig out out some old information such as Rupert Hamer government,
But whatever happened to Mornington line, Healesville line and Daylesford line? all would have solved congest highways on the weekend.

And just look at NSW, especially Sydney, many transport projects(some do not make much sense), and most of all, living cost and public transport fare goes up wayyyy too high, not sure anyone could afford to 1. live there in Sydney and 2. use the transport system.

Now get back to supporting 10 minutely system, sound good, infrastructure and rolling stock both can easily support it, but…

**Who is going to foot the extra drivers salary?
**Operation cost? (there is always the electric bill..)
**Possible extra staff for train control, cleaning, shunting, maintenance and various support staff
And necessary to renegotiate with Metro with their contract and lease agreement.

It’s a good idea, but it won’t happen overnight

@Jay: “Rewind your watch to Kenneth era, do you still remember no first train on a Sunday till
1030/1040am on some lines?”

Nope. Check your sources. First trains on Sundays were only slightly later than as they were until 2016 when the Night Network started; first arrivals in the CBD at about 8:30am, and this had been the same since pre-Kennett. Source: https://sites.google.com/site/krustyklo/

“Who is going to foot the extra drivers salary?”

Same as happens with all other timetable changes, for instance the 2012 upgrades; the government funds the additional cost (drivers, maintenance, power) and the operator implements it.

I guiltily hope they never grade separate the Sandringham line, at least not before Bayside Council realises that pedestrians need to access the station (and cross shopping strips), not just motorists. By *far* the easiest way to cross Hampton St, coming from the station or Thomas St, is to cross while the boom gates are down. It’s that or make a significant detour north for a crossing that only allows pedestrians across once every few minutes, or wait an unpredictable (but at peak hour very long) amount of time for a gap in traffic. The whole area is horrendous.

Sandringham line will go underground in sections from North Brighton Station to Sandringham. There are a number of historical obstacles not allowing for a sky rail or trenching option and the development value of the Bayside land will have the project pay for itself. Previous Vic Track feasibility studies to be revisited maybe, aka’ the Sydney Metro project.

[…] State Coalition seems to have transport policies varying from the excellent (trains every ten minutes, every day — a policy that was announced in March but is still worryingly absent from their web site) to […]

[…] not forget that some service upgrades (such as all-day ten minute train services to most stations) are possible now, before it’s […]

[…] best (in my book) policy was announced and then quietly dropped: trains every 10 minutes. What a […]