Some local residents on the Dandenong line noted this summary of proposed shutdowns in the Environmental Management Strategy (page 11):

Shutdowns – longer occupations, typically from 1 to 3 weeks in duration. Six shutdowns are scheduled between January 2017 and July 2018 and are likely to occur in:

Note that some minor variation to these dates may occur.

What this information doesn’t tell us is the mix of (from best case to worst): weekend day, school holidays, and “normal” weekday.

But given one of the key reasons for building skyrail along the Dandenong line was minimising disruptions, how does this stack up with the original promises?

How does this compare to the Frankston line?

By my calculation the Frankston line shutdowns (for three crossings at Bentleigh, Mckinnon and Ormond) totalled 66 days: 36 on weekends/public holidays, 14 weekdays in school holidays, and 30 normal weekdays.

(But there’s another full weekend closure coming up next weekend, so make that 68 days total… so far.) 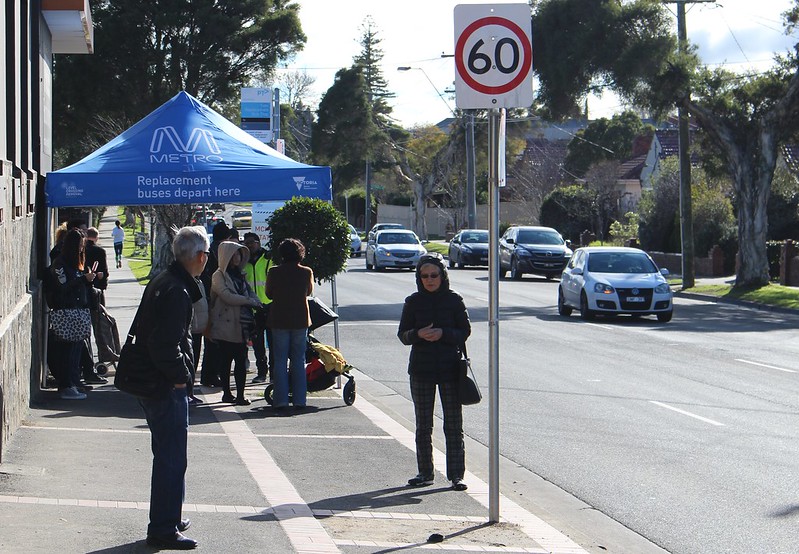 How many people are affected?

By adding up the PTV Train Patronage (Station Entry) stats for each affected part of a line, including the stations beyond the shutdowns, we can estimate the numbers.

Of course, not everyone boarding along the line travels through the closed section, though most would.

But I’m more interested in how the lines compare, relative to each other, so let’s keep it simple and just use the raw numbers for stations at and beyond the closed section.

Double them to estimate the number of journeys affected each day.

I’ve done the figures for the lines with recent and forthcoming major shutdowns:

Important: The weekday figures are based on “normal” weekdays, so a planned shutdown in January 2017 would see fewer people affected, especially if it’s in the earlier part of the month when many people are on holidays.

But it gives you some perspective of how many people are affected. And it’s not hard to see why January and other school/university holiday periods are the least worst time for major shutdowns.

And the Dandenong line has far more passengers involved than any of the others — 60% more than the Belgrave/Lilydale line beyond Box Hill, and 70% higher than the Frankston line, which required 100+ buses to cover just the short section from Moorabbin to Caulfield.

The distance covered by the buses heavily impacts the resources required and the experience for passengers, of course. For several crossings on one line, it might be possible to stagger the works and closures – but equally a “big bang” approach may be better overall.

With the Dandenong skyrail, the promise was fewer disruptions than other methods. The challenge will be for them to meet that promise.

8 replies on “How many people are affected by rail shutdowns?”

Daniel
Interesting that the authorities can plan so far in advance the number of days of closures.
Thanks for the link to the PTV train patronage site. Very interesting spreadsheets.

Plus, works on the Sunbury and Dandenong lines also affect V/Line commuters.

Are you sure the Frankston line shutdown is this weekend? https://www.ptv.vic.gov.au/live-travel-updates/article/frankston-line-buses-replacing-trains-from-8pm-on-friday-4-november-to-sunday-6-november-2016/ advises next weekend.

@Peter, thanks for that – you’re right, I misread it. It’s next weekend. (And the following weekend on Saturday 12th November there’s a “Family Fun Day” at Bentleigh, Ormond and Mckinnon stations.)

Are there ways in which shutdowns can be shortened.

I’m interested to know if the current shutdowns at St Alban’s for example could’ve been much shorter depending on the way it’s planned (& if they could’ve built the new tracks before closing the old tracks, do a closure for connecting the new tracks with the old and then pull the old infrastructure apart once the new tracks were in operation).

In particular, I’m under the impression that Boronia, Springvale and Nunawading had very short shutdowns in the past for their removal projects and wonder why the works on some line are taking much longer (I’m aware in the case of the Frankston line, the Boronia solution would not have worked).

Other things that come to mind are Belgrave customers being affected with possibly 60 or more days of rail disruption over the next couple of months (with a break around Christmas) with the Bayswater and Heatherdale/Blackburn projects (and wonder why they’re doing these works close together).

Finally, I wonder what percentage of travellers would choose not to use rail replacement buses during shutdowns but use other means of transport or not travel beyond their local area during rail shutdowns

Great commentary as usual, Daniel. The Dandenong line impact certainly puts the others in some perspective. The real comparison, though, is what would happen without Skyrail as a total impact of closures on the Dandenong line. A couple of other observations on closures – how well stations that aren’t termini (such as Sunshine) operate under that scenario – does appear there are more trains than normal operating between Sunshine and the city (although I travel the other way to Geelong) – car parking at Sunshine has been impacted during closure – all full before 7am – as well as carpark closure to accommodate the buses, would also expect some commuters from stations further up the line driving to Sunshine and displacing normal Sunshine commuters. And also basically a whole train of people to get through the barriers (which have mostly been open, I think – but people still touch off) at once to get to the buses. Interesting that Metro haven’t run a train shuttle between Sunbury and Watergardens, which would reduce the number of buses required – presume there might be risk issues doing that, although they could run trains to Albion/Sunshine during RRL shutdowns, or it’s just not worth doing that to service Diggers Rest and Sunbury.

I sometimes think today Metro like to cause maximum disruption with these closures. Forty or so years ago the VR would overcome problems on the job and do EVERYTHING to keep trains running, only turning to bus if a meteorite blew a crater in the tracks. Examples of keeping trains running are the Canterbury grade separation, East Richmond extra tracks, Elgar Road and Box Hill grade separation (as I lived at Heathmont I recall all these). Even one stinking hot day that saw the Down tracks buckle in the Heatherdale cutting in the afternoon peak – Answer – Reverse the trains heading to Ringwood at Mitcham, on to the Up tracks and then proceed to Ringwood running wrong line: total delay – about 6 or 7 minutes for each train. The VR General Appendix covered all such events and how to do them safely. Today – call the buses and stand in the sun for an hour waiting. Of course, one couldn’t reverse trains at Mitcham now – some wizz-kid decided to take the sets of points out when they dropped the station in a big hole.
And while we’re on the subject, why are THEY wasting money by putting Bayswater in the cutting? If they’d elevated it they would have halved the cost and the disruption – and before someone complains – It would NOT look into anyones backyards. Ditto: Blackburn – should’ve been elevated. Blackburn is the bottom of a grade BOTH WAYS, so the obvious solution is to elevate the line and again, it would not look into anyones yards.

First off I would argue, Frankston line was only one series of 3 crossings.

Dandenong line is three groups or lots, and nine crossings in total. Three times the project, with similar time in closure times.

Also, Labor would want the project to be open just ahead of the next election, where the people can vote in celebration of the removal of nine crossings in one go.

Given there shall be only one machine used for putting in the concrete beams or bridge sections, you will need to do each of the three sections separately. Otherwise, could you cut the delay time needed?