Sometimes travelling by train at night you’ll see PSOs out on the platforms and station concourses. Sometimes they’re not in sight… they might be in their pod, or elsewhere.

Given the high-profile rollout of PSOs onto every station a signature policy of the 2010-2014 Ballieu Coalition government, carried over by the Andrews Labor government, you’d expect that the staffing would be reasonably consistent.

Turns out it’s not.

Macleay College journalism students lodged an FOI request to find out how many stations were without PSOs on duty during the last week in June.

It was surprisingly high. On the Saturday night, 18 stations had no officers on duty due to unplanned leave (in addition to 5 stations closed for level crossing works).

The train network is generally safe, and many passengers have said they feel safer having PSOs on stations. But it takes a lot of officers to do it, and comes at a huge cost.

You would think authorities would have enough officers to roster onto every station, especially during a period when numerous stations were closed for rail works. Hopefully when they fall short, they’re prioritising stations that don’t have other regular Metro staff on duty, as well as stations where crime is a concern. 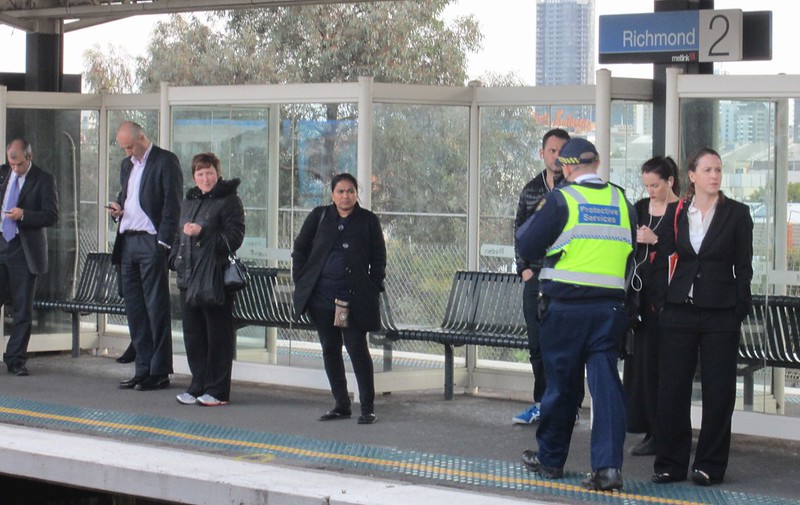 The broader issue is whether providing two officers at every station, busy or quiet, every night – and only at night – is sustainable in the longer term.

The PSO rollout was completed in June 2016 with officers deployed at Alamein line stations Hartwell, Willison as well as South Kensington.

As noted in a fascinating piece in The Age last week by John Silvester, it’s an extremely expensive program, with unclear levels of success. Officers have limited powers, and are deployed in a one-size-fits-all approach that doesn’t really work.

As has long been highlighted, some stations have more crime than others, about half of all crime occurs before 6pm when officers come on duty, and many incidents occur not on stations but on the trains – where PSOs don’t patrol.

PSOs on every station (nearly) of course frees up Victoria Police officers and Authorised Officers to patrol both on the trains and elsewhere in the community.

But with an estimated cost of $80 million per year, it would make sense to target resources at the hotspot stations where crime is a real problem, not just at night but from first to last service – and have others PSOs patrolling around the network, not just stations but also on-board the trains.

They go buy their dinner every night in Carnegie, must have a stipend. The construction workers on skyrail have been buying a lot from the shops around the area.

PSO’s should definitely patrol ON THE TRAINS. Have a designated group of officers to patrol different lines. The officers should get on and get off trains randomly along the line. It’s ON the actual train between stops that all of these sexual assaults occur, drunk people causing disturbances, graffiti and so on. The PSO program is a great initiative and it does make commuters feel safer, but on the other hand, are they really needed at those quiet, one platform stations all night??? (And yes, they do need to patrol during daylight hours too).

PSOs prevent graffiti and vandalism – which is not violence but a crime nonetheless. I bet John did not count the money saved by preventing vandalism.

And there was an article published that said PSOs have caught people who had arrest warrants against them. Not sure how, perhaps facial recognition or they were just known by the police.

As for crime in the trains – maybe there could be an app to alert PSOs at the next station that there are criminals in the train. So by the time the train reaches the next stop – the PSOs are ready and waiting.

Interesting that PSOs are still clocking on at 6pm when it gets dark at 7:30pm.

PS Why would a NSW student do a project on PSOs in Melbourne?

I wonder if the new requirement to provide PSOs at every station could ever be used as justification to declare it uneconomical to run trains on marginal lines?

Look at the Alamein line for instance, a single 3-car train shuttles back and forth at night, so previously only 3 people were needed to keep the line running (1 train driver, 1 signaller at Riversdale, 1 station staffer at Ashburton).

Now with the requirement to employ PSOs on every platform, the staff requirement has gone from 3 to 15 people! And for the number of people who use the line at night, what economist would argue that it’s better to employ 15 staff to run a train service than a bus route that would only need 1 bus and driver for the same purpose?

Maybe the Alamein Line could be one of the first lines to rid itself of 2 PSOs at every station given that the line is not exactly a crime hotspot. Maybe the Baillieu boxes could be converted to functioning toilets or some other use that benefits the public.

Would be interesting to compare the crime statistics for the 6 hour period when PSOs operate prior to midnight to the period when the Night Network operates between midnight and 6am on Saturday and Sunday mornings when there are no PSOs at many stations.

I have a better idea for stations if PSOs aren’t always working as intended, how about actual station staff? Upgrade every host station to premium status already and move the morning peak customer service staff to the unmanned stations (and have them in the afternoon/evening peak too while they’re at it). Granted, places like East Camberwell or Wattle Glen would be interesting to have staff dumped there, given the almost complete lack of any sort of building and no facilities whatsoever.

Media personality ‘Sly of the underworld’ who comes onto my 3AW radio station each wed just before 8:30 am, had some things to say himself on that radio segment a few weeks ago.

He is under the impression that the PSOs are a massive waste of resources. How they hear on their radio, that a domestic happens in a house just across the road from the station, and they can not attend. If only they could, they would be there well before the regular police show up.

He also claims that the PSOs are bored out of their wits too.

My fellings are you need PSOs as follows
++ Each of the city stations
++ At selected major suburban locations
++ End of line terminals, where they can give security to train drivers who need to change ends of a train
++ Roving PSOs who can turn up at regular hotspots.