One of the things you start noticing a lot more when you have two tertiary-level film and television students in the house is aspect ratio.

Local council elections are in October, and posters have started going up for candidates.

In some wards you see full-sized billboards, but in ours — so far — the most prominent posters are small, displayed in shop windows. 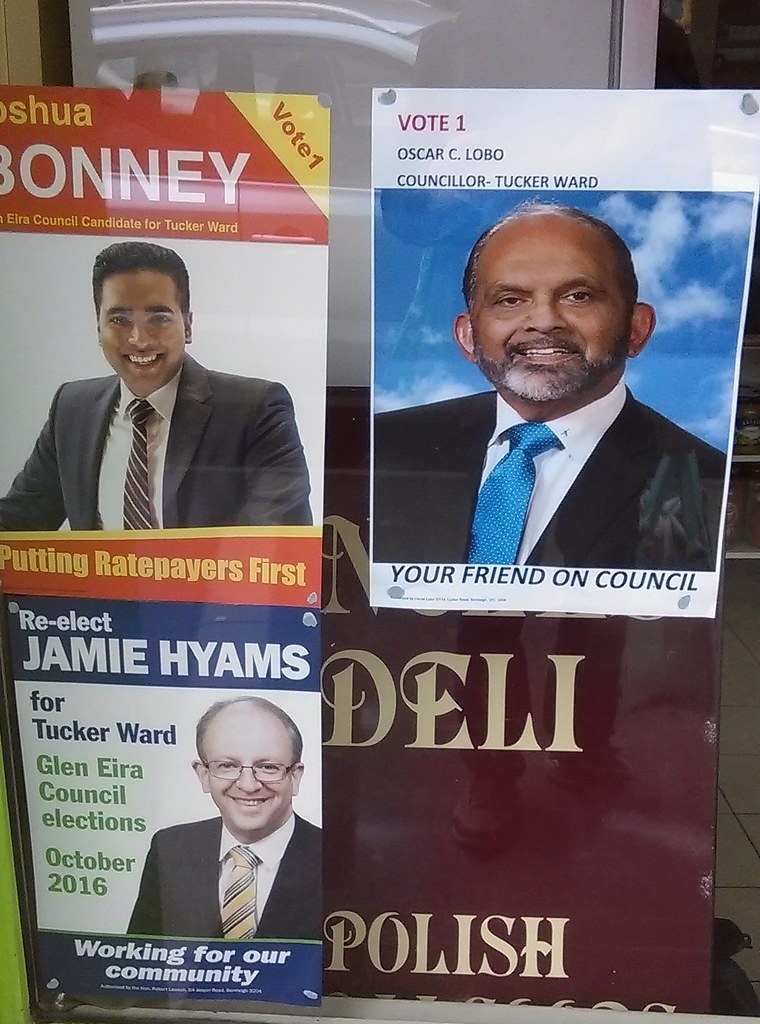 Not that it’s important, but I can’t help noticing that Oscar Lobo’s picture is the wrong aspect ratio.

I’ve met the guy; he’s often in Centre Road talking to constituents. His head isn’t that spherical, and his torso isn’t that bulky. (Some of his posters have his picture in the correct aspect ratio.)

Some others have been seen out and about.

Local election time – candidates have started handing out fliers at the station. pic.twitter.com/gYgTS98yFv

So, who to vote for?

In many cases, council candidates are relatively uncontroversial. And in our area (Tucker Ward), most candidates are not strongly (publicly) aligned with the major political parties. There are three vacancies, and 14 candidates.

As far as who to vote for, all I can say is:

I’m overall pretty happy with my local council. Most services seem to be run efficiently, facilities are good, and rates are lower than in a lot of other areas. They’ve also tried to do some education on keeping footpaths clear of vehicles and trees, though this could be stepped up with more, and enforcement.

As the Dandenong line skyrail project now seems inevitable, it would be nice to see the council proactively working on how the freed up land beneath the tracks will be used.

I would single out Jamie Hyams (loosely Liberal-aligned). I met him years ago, when he was originally standing for council. He asked what City of Glen Eira could do to help the cause of public transport. One thing I suggested was to join the Metropolitan Transport Forum — at the time, Glen Eira was one of the few councils that were not a member. He said he’d look into it if elected. He was elected, and subsequently they joined. More recently he was mayor when the council unanimously passed a motion accurately pointing out that East West Link will bring little benefit to our area. I’ll vote for him again.

I’m not sure about my other preferences; I’ll consider them closer to voting time as candidates make their views on issues known.

I haven’t checked other areas, but in Glen Eira electoral rolls have already closed, as have nominations. Ballot packs are sent through the mail in early October, and are due back in the mail by the 21st — I assume most council areas are the same.

6 replies on “What can council elections teach us about aspect ratio?”

In terms of the candidates shown, the men look very boring (all wearing suits with white shirts and ties) whereas Nina looks bright as a button.
That’s probably NOT the best criteria to select a candidate!

I did a survey of the candidates in Glen Eira and 95% of the had preferenced the same same person. Not even counting the family member who only ran for preferences. The owner of the local hairdressers is also running in my electorate, I have been going to that hair dresser for 15 years so at least I know them this time.

I wish my local candidates would bring up issues about transport (in Hobsons Bay). Though, I would imagine the Altona Loop being an issue the council struggle to raise with the state government.

Good commentary Daniel.
I have nominated for Glen Eira in Tucker Ward.
Of concern is the fact that many of the candidates do not reside in Tucker Ward….however. ..that does not prevent from nomination.
Public transport has been an issue for a number of years.
Removal of rail crossings in Bentleigh, McKinnon ad Ormond is a step in the right direction however the issue of car parking at the stations, appears to have been overlooked.
“Skyrail” is not in “Tucker Ward”, however as it falls under Glen Eira Council, and as such I have an opinion.
“Skyrail” has proceeded swiftly with negligible community consultation. Community opposition was ineffective, as the digging of trenchs was well underway.
Waa Glen eira Council “oblivious ” to the Sky rail project?
As far as I am aware, once again….no changes or dedicated car parking. I reside in close proximity to Monash Medical Centre. Taking the bus to Bentleigh or Murrumbeena station in the morning, is pretty good. Getting home after 6pm is a unpredictable and quite frankly a nightmare.
Unfortunately the bus timetables do not coincide and consequently it is easier to drive to a station.
Hence, car parking at rairway stations needs to be considered.
Grange Rd / Dandenong Rd rail crossing….no changes???
Seriously. ..major work at other intersections….Skyrail from Carnegie to?…
But no change at major intersection????
Note, these are issues that are at State Level, however Council should be consulting with Community AND Government, for efficient, appropriate and strategic outcomes.

@Tim, good point; once we see the preferences it might become clear which are the genuine candidates.

@Donna, thanks for your post. Just so we’re clear, the Grange Road crossing is being removed. Not sure there’d be any other major change to the intersection, but the trains will go above the road.