Pedestrians — Use other footpath.

Haha just kidding, there IS no other footpath!

You’ll have to use the road or the (possibly wet boggy) grass. 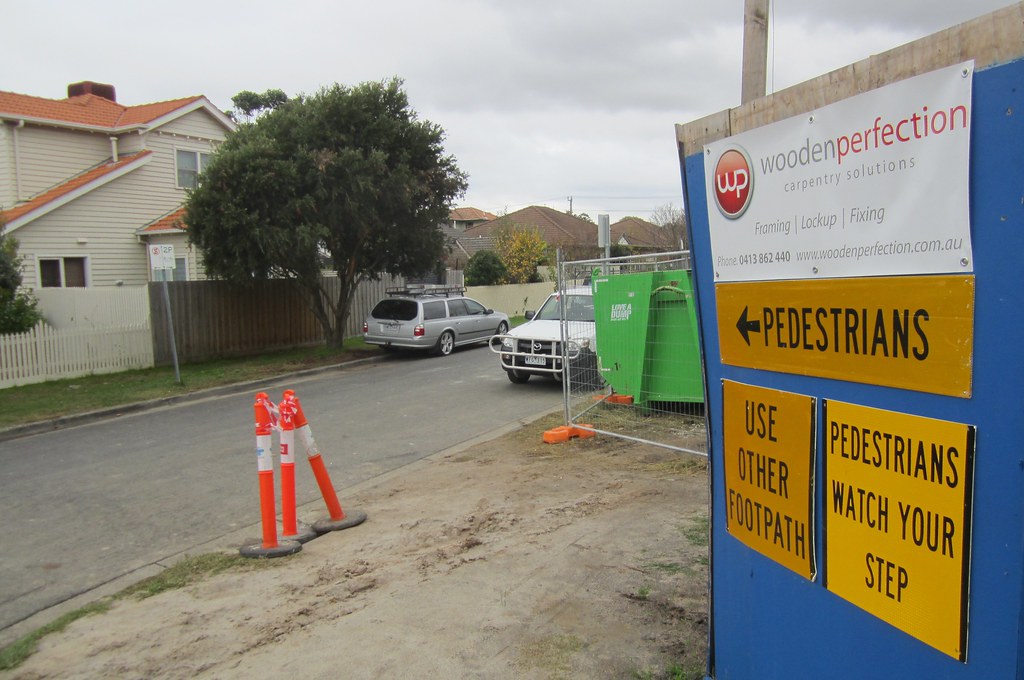 (Ward Street, Bentleigh. The footpath is blocked for building construction. Not many streets in this area have only one footpath, but a few do.)

9 replies on “Use other footpath”

Luckily with footpath closures adjacent to busy roads, you often see a temporary path with barriers, signage and ramps to/from the road shoulder. Not the case when Chadstone had its roadworks though. For some reason I felt compelled to explain to one of the workers there that such a thing was possible and widely used, but was dismissed because of course the cars would run you over, you should just cross 8 lanes of Princes Hwy twice instead…

@Nick, I suspect in this situation it’s worth contacting Vicroads, the council or Chadstone itself, rather than the on-the-ground workers. I wonder if someone in government actually gave permission to close the footpath, or if they just did it without asking?

A closely related issue is when building works damage a footpath. A while back there was a situation like this on my way to the station and although I’m able bodied I thought that anybody with a pram or wheelchair would have difficulty. So I complained to local council and was told ‘its OK because they (the builders) have to fix it before they are finished”. The only problem with that was that the builder went broke and it took the council two years to fix the footpath. Even if the builder didn’t go broke it could still take some months before they are finished.

I missed my usual bus stop the other day, and on the walk to my destination (in East Bentleigh), noticed that two or three of the small suburban streets had NO footpath on either side of the road. There were cars parked on the road, and it occurred to me (even before reading your blog) that parents with prams or wheelchair-bound people would have had to go around the parked cars to get to any of the houses in those streets. Who designed these streets? The same people who made it almost impossible to walk from a nearby hotel to the front gate of Disneyland in California?

The absence of footpaths is becoming more of a problem as residential development fills in back yards across Melbourne. I was involved in a recent planning dispute in which nine dwellings are to be built on two adjoining former house sites in Ringwood. The sites are on a street without footpaths and, until recently, pedestrians have been able to deal with the absence of footpaths by walking on the road or the nature strips. Obviously those who can’t traverse rough ground have had to use the road.
The increase in on-street parking demand from the conversion of the street into a medium-density environment is going to result in the parking of cars on both sides of the street. This will, in turn, necessitate pedestrians walking (or operating wheelchairs and prams) in the centre of the road. Vehicular traffic will need to slow or stop to allow this to happen, because there is not sufficient road width to accommodate pedestrians and vehicles alongside two rows of parked cars.
This issue was brought to the attention of Maroondah Council during the planning consideration period, with a request from objectors that the developer be ordered to provide footpaths; it is this development which will cause a substantial increase in on-street parking, making it impossible to get away with the conventional practice of walking on the road in relative safety. The council ignored the request, perpetuating the myth that footpaths should be constructed at the expense of existing residents if they want them.
I hope that when people of limited mobility are struck by cars in streets such as this example street, questions will arise as to the liability of a council whose responsibility includes provision of safe pedestrian access to all.

If someone slips over on the wet boggy grass who’s fault is it?

I once queried workers about this (i.e. there is no other path). They said a sign like this was a requirement of the licence they got from the council (allowing them to block the path). Even though it’s meaningless.

This is common for many areas in Melbourne especially the outer suburbs and newer developments.
Proper footpath infrastructure is cheaper and more effective than any other infrastructure in moving people.

I see I was also beaten to the subject of Ringwood’s footpaths by Philip above! It’s fitting that Ringwood is also the home of Car City no less; it may actually be easier to note the streets in Ringwood (and Ringwood East as well) which *do* have footpaths. The latest street to gain a footpath on both sides is Market St, only a decade or so after the Ringwood Market itself was closed down. Strangely, some of the street signs still show Ringwood Market as a location, as does the 742 bus stop which is opposite Churchill St (the bus stop used to be outside the market but was moved when it closed down, but considering it closed down that long ago and the printed timetable on the bus stop has a PTV logo on it, not Metlink, there is no excuse to why it is still called something which doesn’t exist).

Add to that disservices such as forcing some people to walk/ride a kilometre (or even more) out of the way just to get to the Eastlink Trail despite the bike path being in plain sight with no private properties or buildings in the way. At the bottom of Dampier Grove there is a partly gravel, partly paved walking/bike track which leads all the way to (or, underneath) Deep Creek Rd before finally joining the Eastlink Trail, and despite being parallel to the trail itself, the main path is blocked by a chain fence all the way up the hill, and to the east, a vacant lot with a broken wooden fence where a tree has fallen onto it and hasn’t been cleared in years. They seemed to think that anyone coming from Dampier Grove would only head west towards the city and not towards Eastland. They pulled the same trick again with the Eastlink Trail at Palmerston Rd East (Melway 49 E11). This dead-end street finishes with nothing more than a chain fence blocking the trail as well, forcing anyone who comes from (or wants to access) the southern part of New St to go all the way to Molan St. The distance between Molan St and Canterbury Rd is almost 1 mile in the old scale, with Palmerston Rd East being roughly half way down. Said fence has telltale signs of people bending it upwards so they can get under it, so an entry/exit point is clearly needed here. Of course, being that Ringwood is a safe car-loving Liberal Party area with Michael Sukkar’s name all over it, the chances of anything happening that helps people that aren’t in a car are very slim.

Also, the people who designed the car-centric, mostly footpath-less housing area in the middle of nowhere north of Lilydale (Melway 280 D11/12) should be shot too. Yes, those stuck there also get shafted with the typical, infrequent, Sunday-less “coverage” bus service to go with it (677).