We were meeting my sister and her family (also in town for the wedding) to catch a shuttle bus to the Singapore Zoo for breakfast. Not just any breakfast – breakfast with the orangutans.

Yep, you get to eat a buffet breakfast while apes frolic nearby. Have I mentioned that Singapore is the land of buffet meals? During a week’s holiday, we had buffet breakfasts, buffet lunch, buffet dinner… all delicious.

After getting our photos taken with some friendly beasts (the zoo staff will happily take your photo with your phone or camera, and they’ll also try and sell you additional photos) we looked around the rest of the zoo for a few hours. 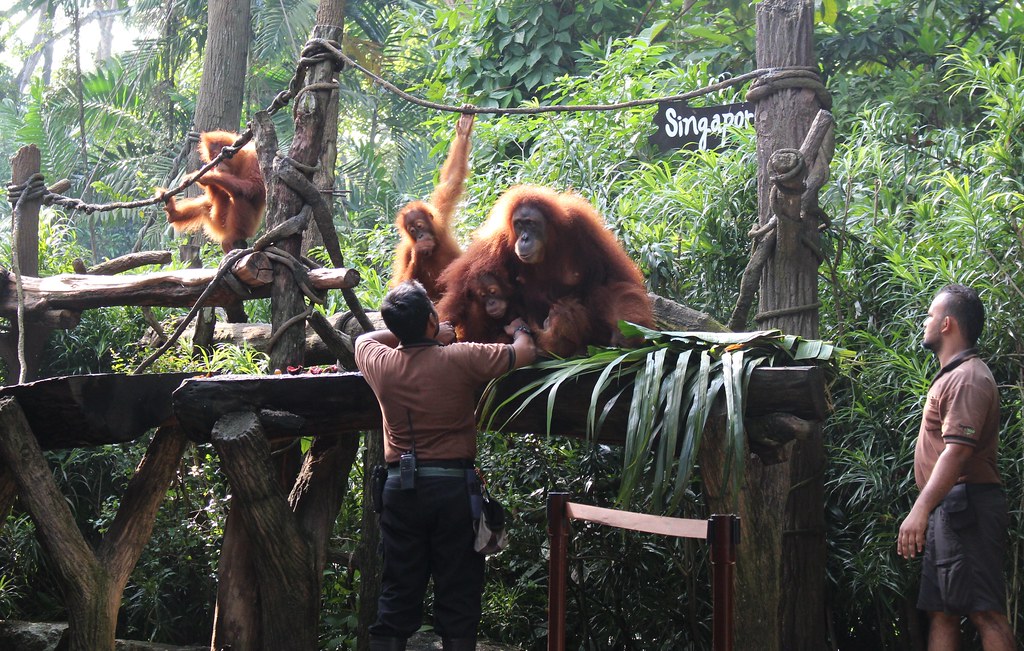 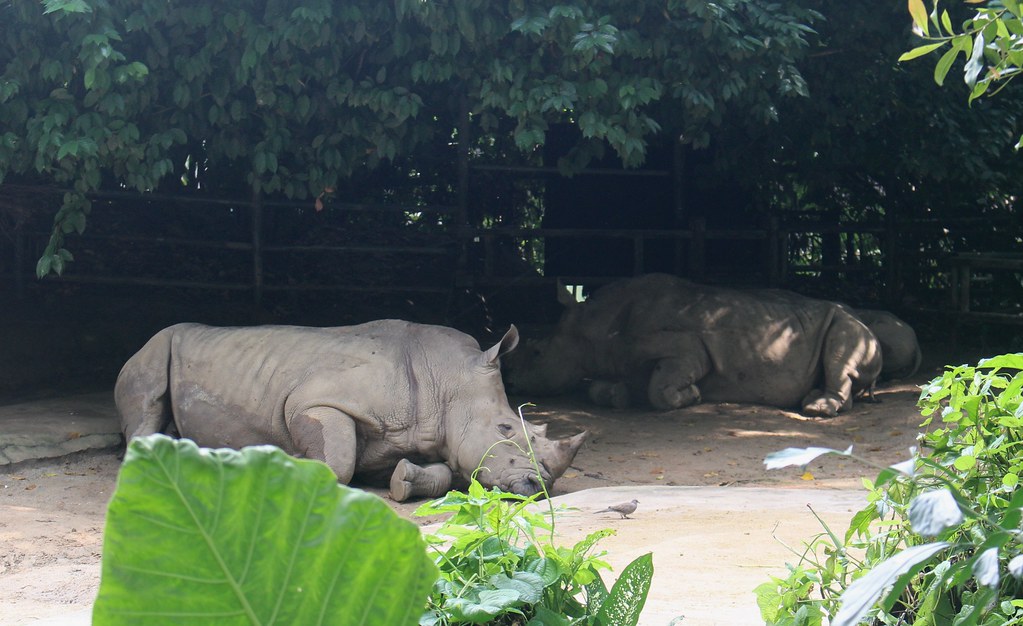 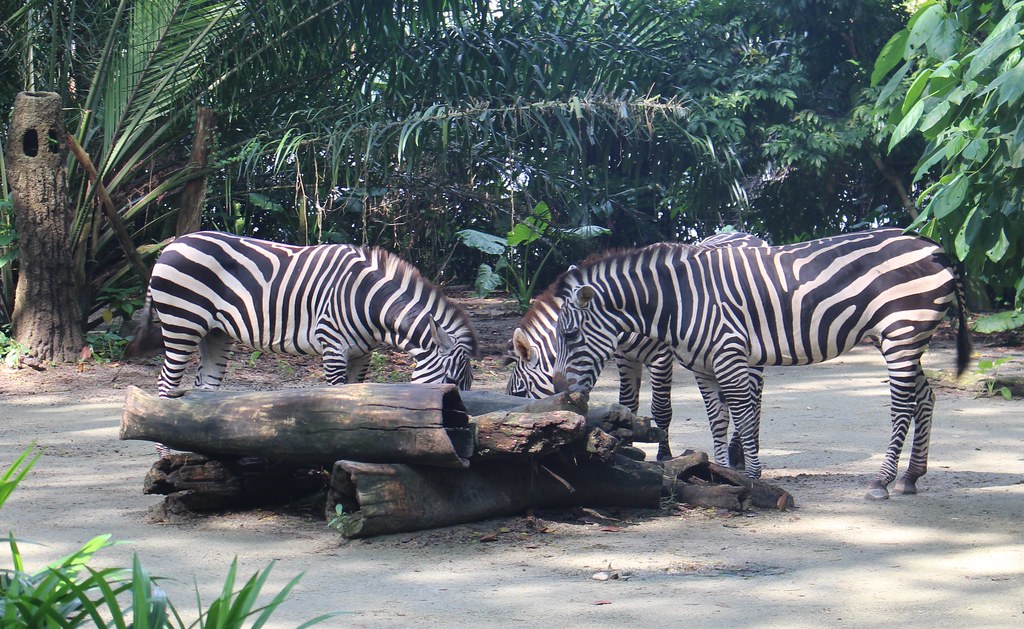 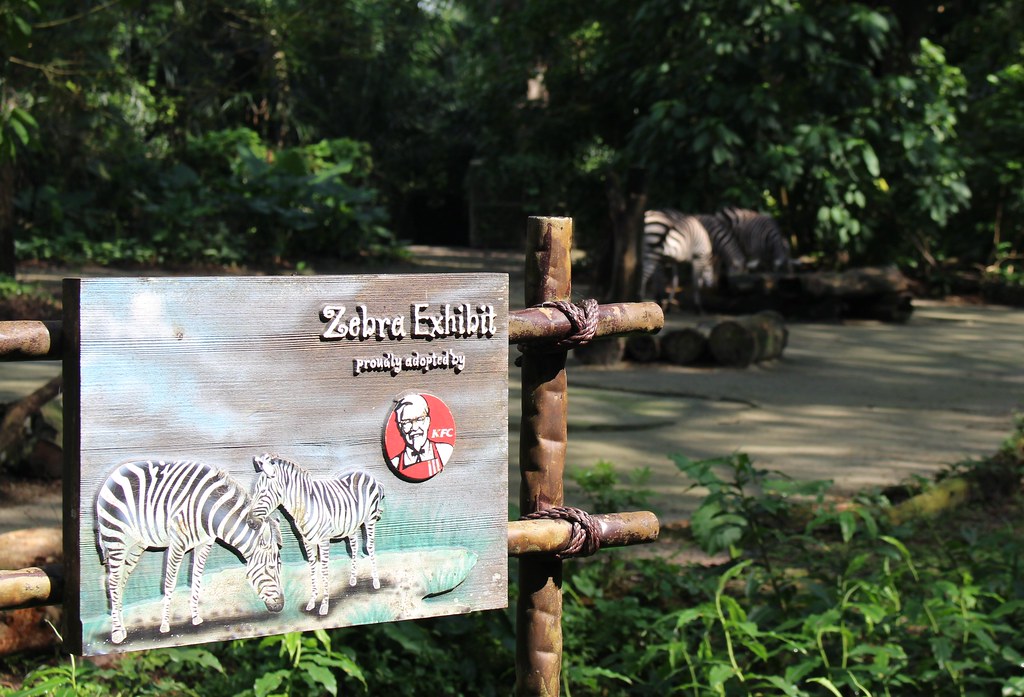 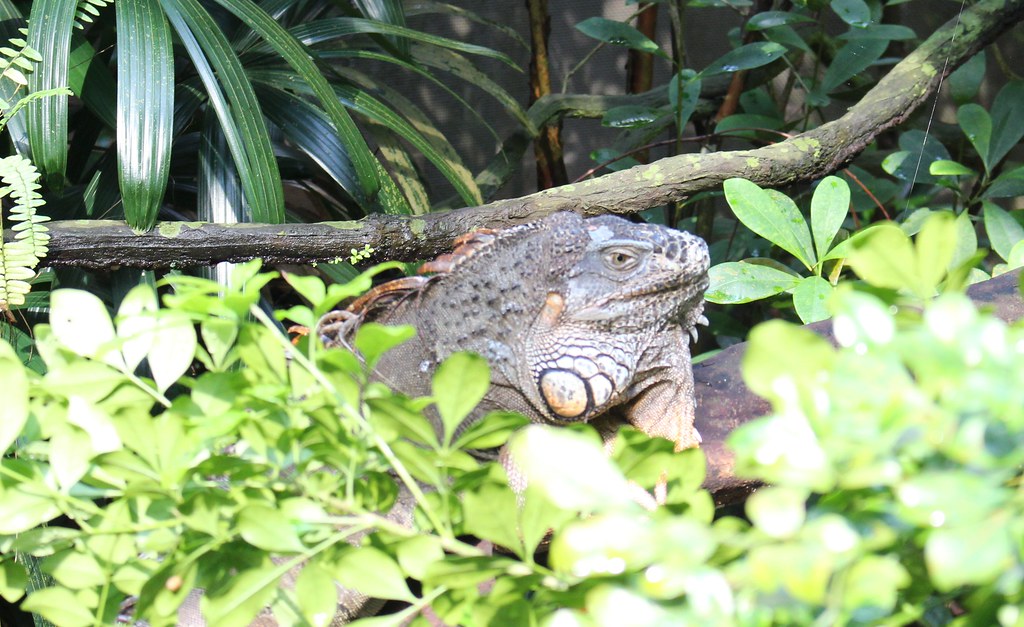 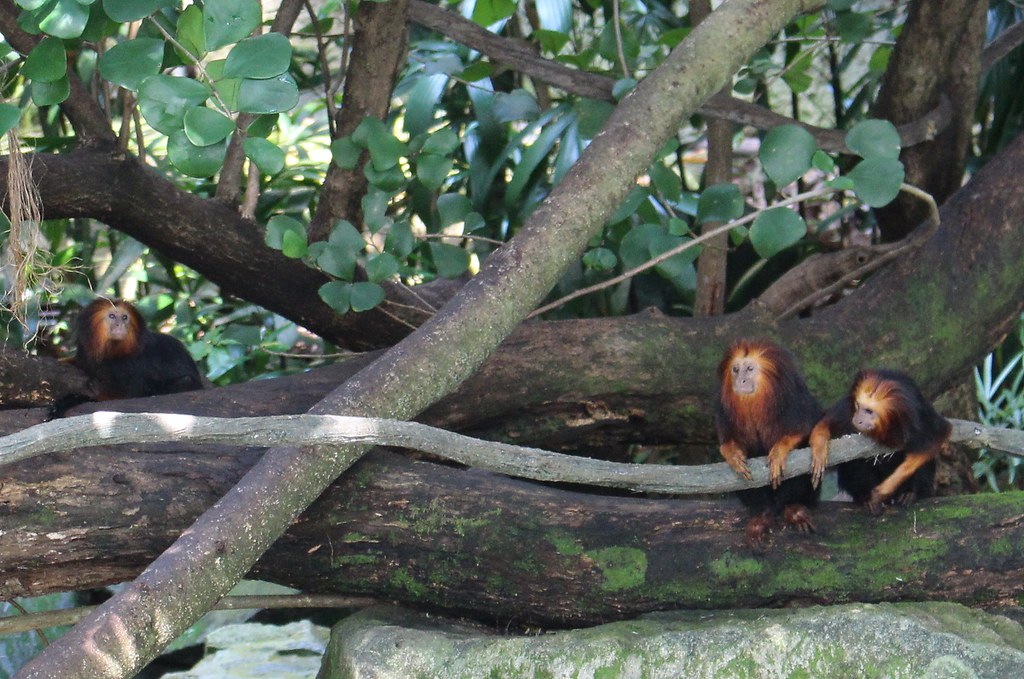 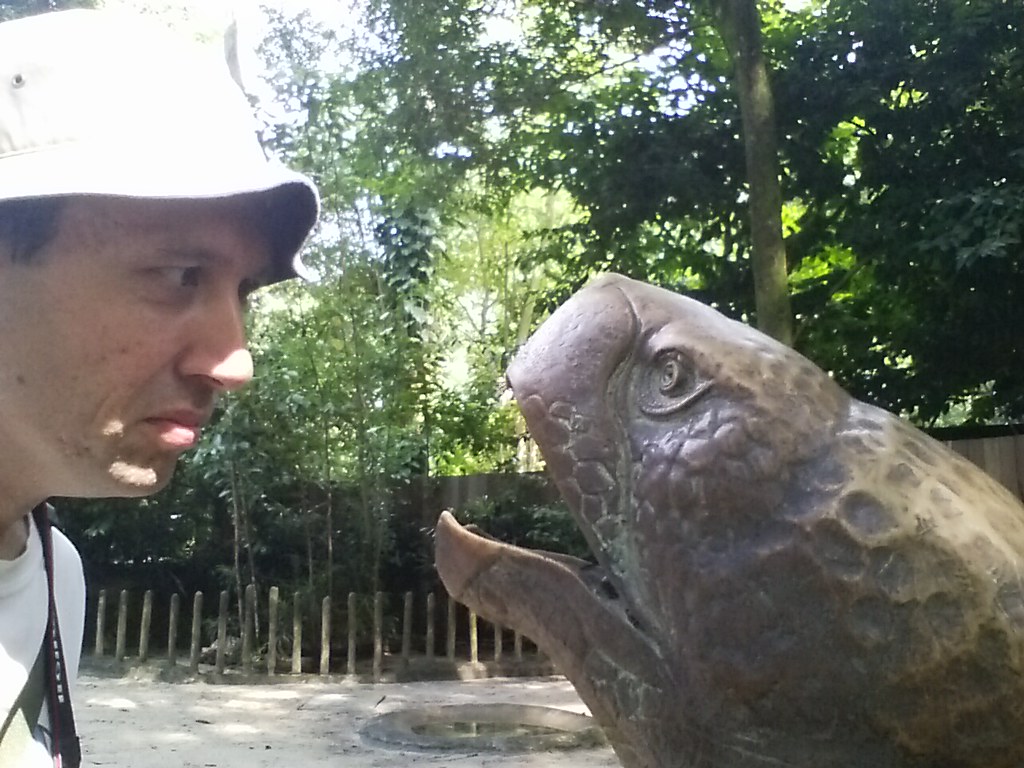 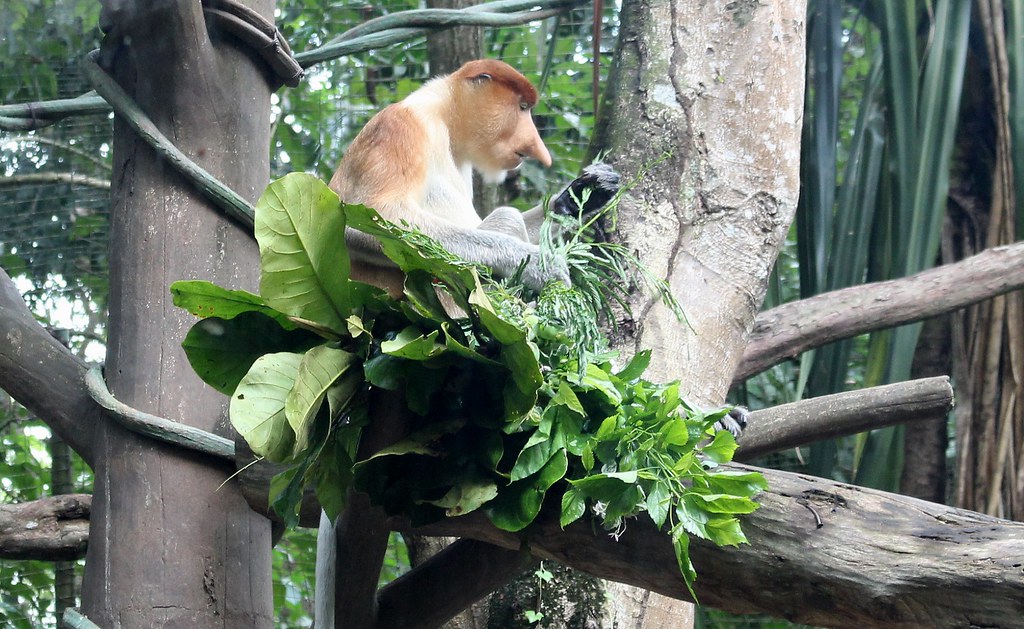 As you’d expect, they specialise in animals from their region, but also have exhibits from other parts of the world. Alas the Australian exhibit was closed for maintenance, but there was plenty of other stuff to see.

At one point I saw a distinctive proboscis monkey, which left me chuckling, reminded of a scene in Tintin: Flight 714, which of course was set in the jungle. Note: minor spoiler from 1968 ahead.

Evil genius Rastapopoulos and one of his henchmen (Allan, I think) are chasing Tintin and friends through the jungle. Allan hears a noise, then realises it’s a proboscis monkey. He laughs at its nose, remarks it reminds him of someone… then looks around to see Rastapopoulos (who has a big nose) fuming. Here’s a scan of this (via this page).

It was a great zoo, but what the kids (and probably the rest of us) will remember about it is getting into a minor prang on the way back.

We were waiting at a traffic light with two right turn lanes… and another car decided to try and make a third lane, wedging itself between us and another vehicle. Cue sound of crunching metal. 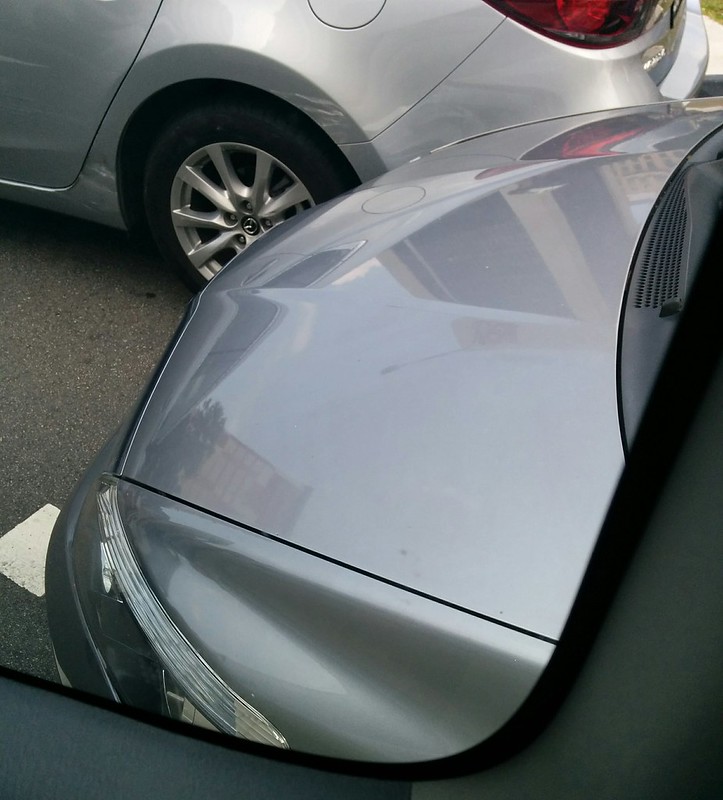 Perhaps our driver was trained not to swear in front of children; perhaps all Singaporeans are very polite. He let out a wordless exclamation of frustration and hopped out. We watched as the three drivers involved calmly inspected their vehicles and took photos of one another’s’ driver licences and licence plates.

On the bright side, nobody was hurt and it didn’t appear that the damage was serious.

We asked our driver if he needed witnesses. He said no… because he was in the right. He certainly was, though the confidence that he would get no problems with insurance claims was perhaps an interesting insight into Singapore culture.

That excitement over, M and I headed down Orchard Road for lunch. We were following a tip in the Lonely Planet book which turned out to be a dud – despite being a new edition, we found a couple of times during the trip that the listed attraction had shut up shop. Lesson: Google it before setting out. 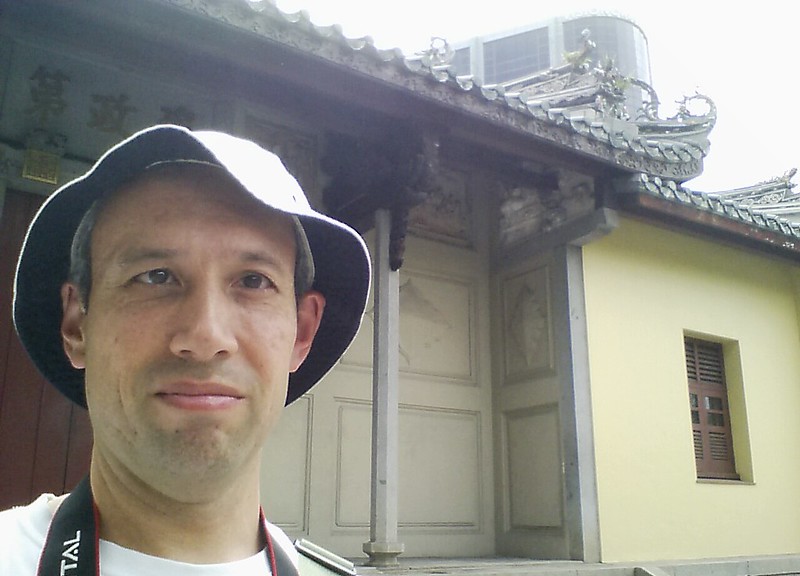 We found lunch elsewhere then wandered around the area to look at the House Of Tan Yeok Nee, one of the last remaining Chinese mansions in Singapore, dating back to 1885.

We also wandered up Emerald Hill Road, where there’s some other historic architecture. It’s interesting to see what while Singapore in general is awash with new development and bold modern architecture, they are also preserving selected historic properties. 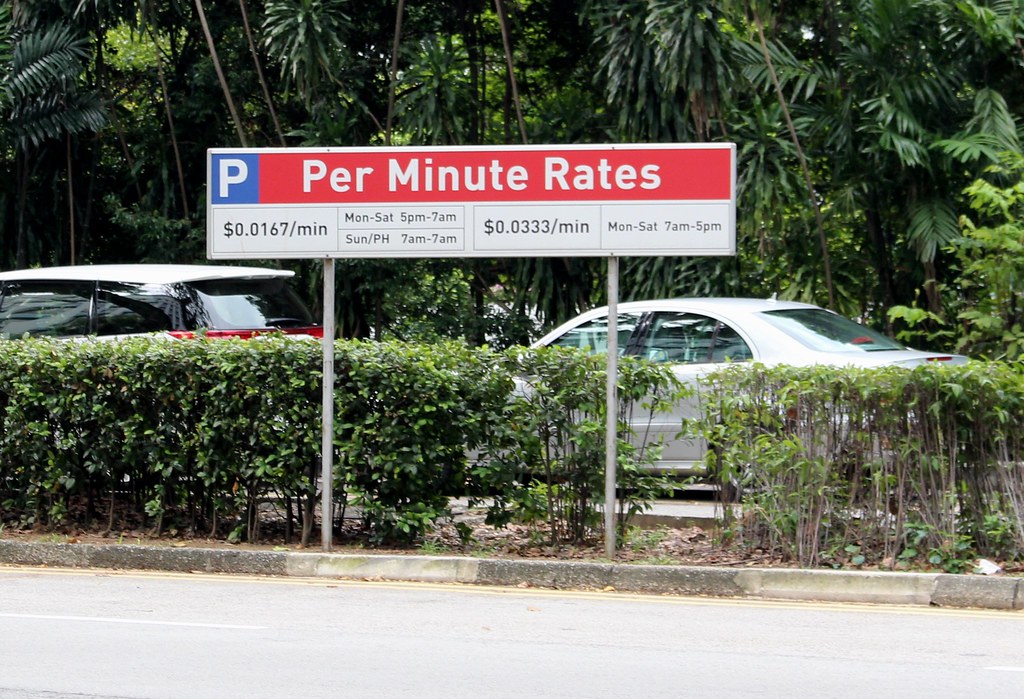 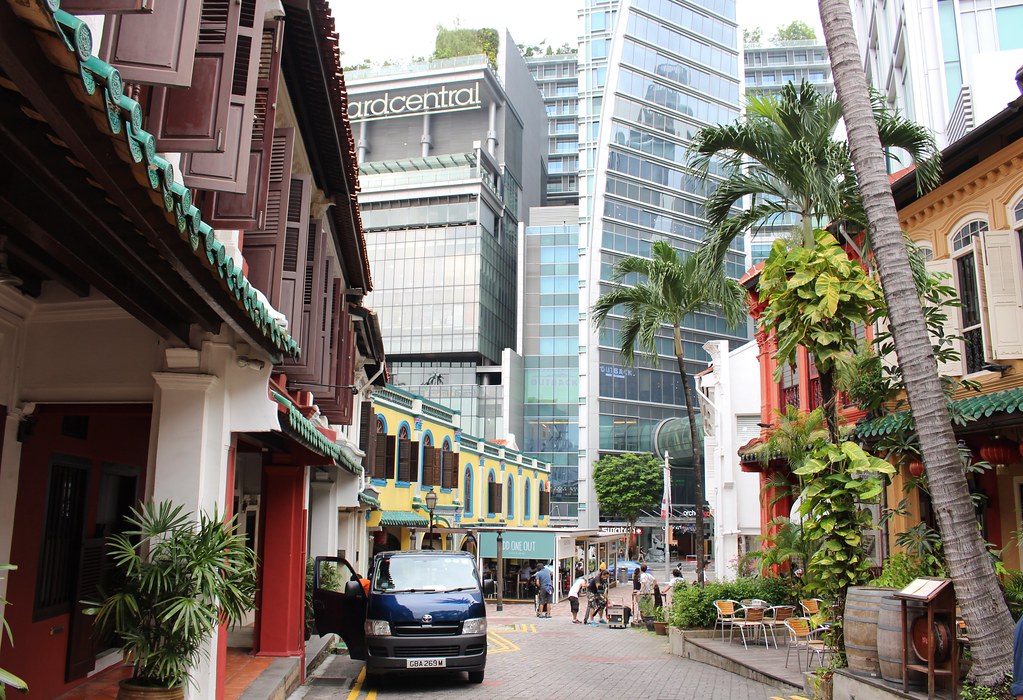 From there we got back on the MRT and headed to Tiong Bahru, a suburb known for its somewhat eclectic shops — at least according to the Lonely Planet book. It seemed like something interesting to see that was off the tourist path.

There we found art deco architecture of a less imposing type than the Parkview building the day before. The so-called “horseshoe block” was built in the 1930s, as some of the first public housing in Singapore.

It was also interesting to get a look at non-downtown Singapore. High density still abounds, but for all the efforts to help get more people walking, cycling and using public transport, the footpaths can be pretty poor outside the downtown area. They were often narrow, with sharp drops either side, close to fast traffic, and not accessible to wheelchairs.

Some quirky, Brunswick (Melbourne)-style shops, an ice cream (we’d earned it) and a bakery later, we caught a bus back to downtown and the hotel. 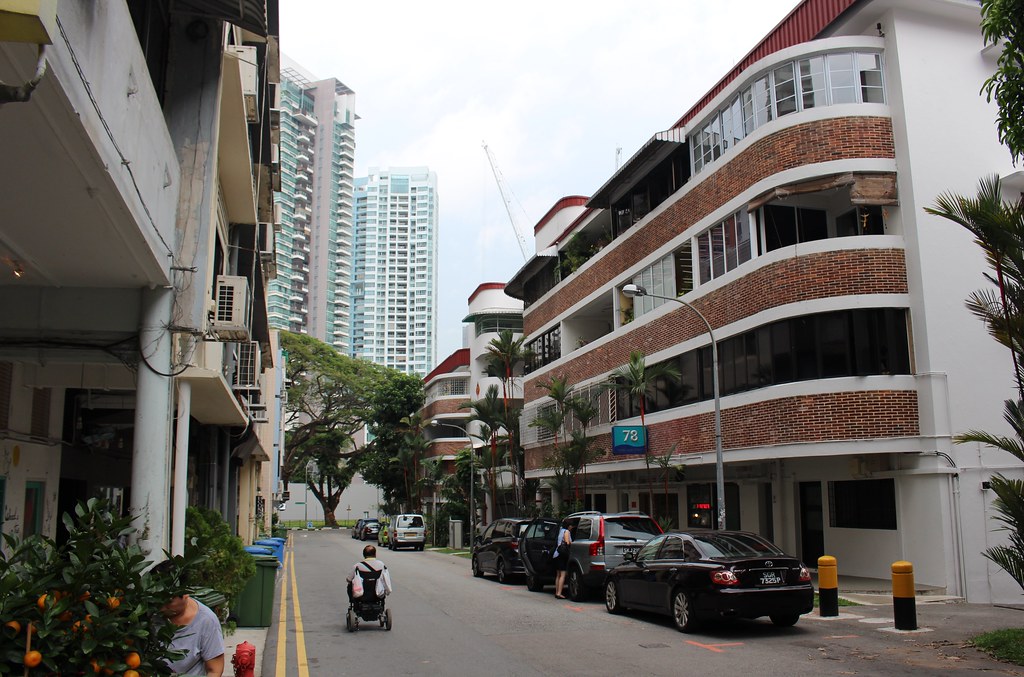 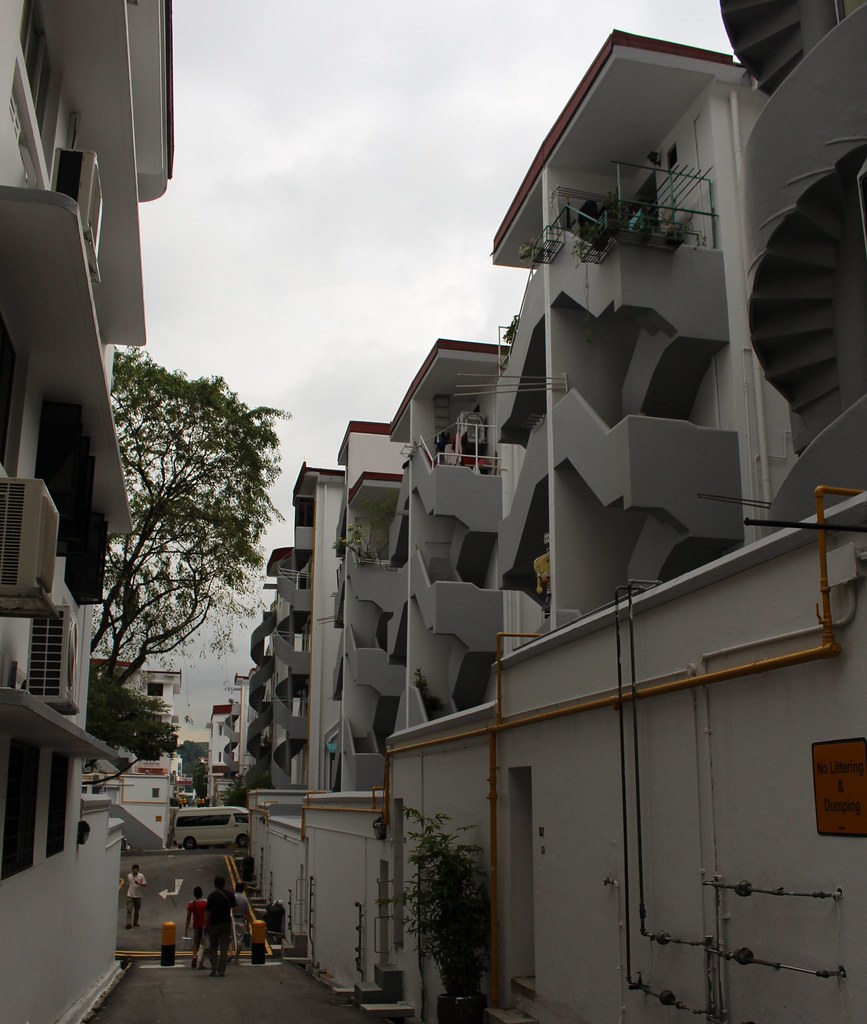 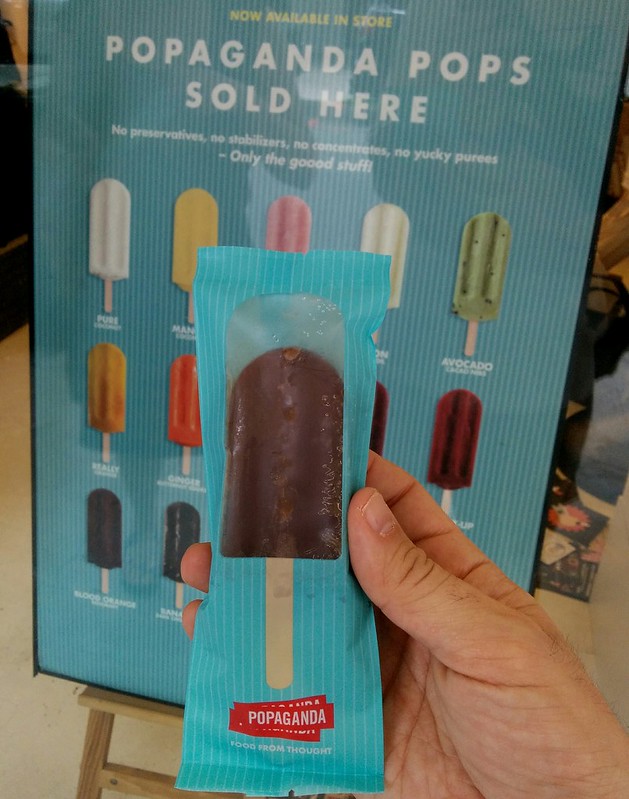 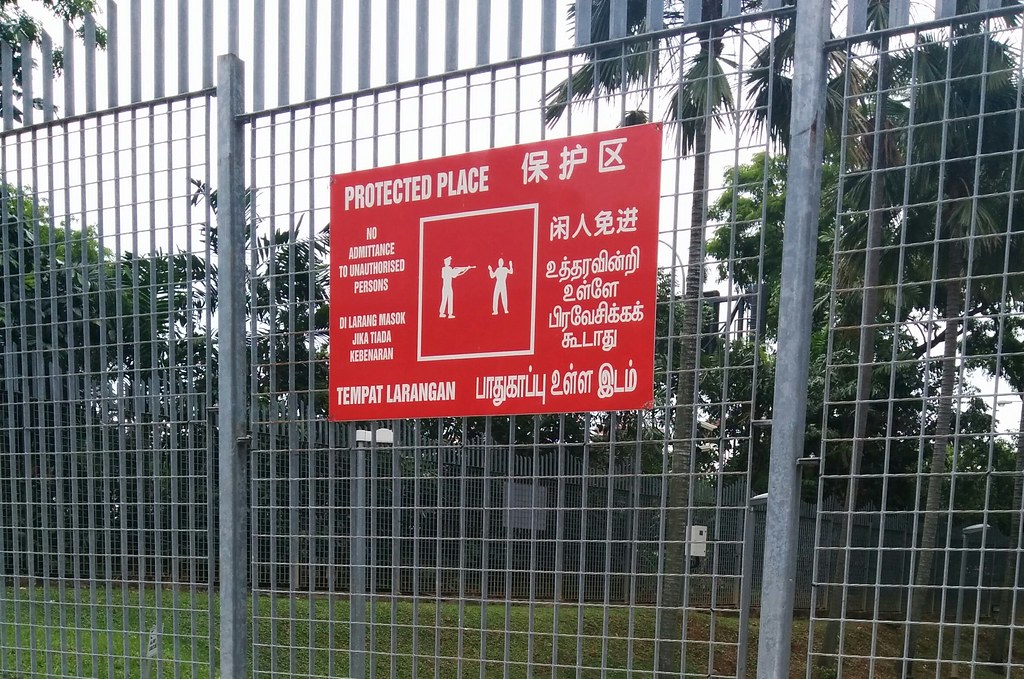 By this point I was running out of clean clothes – I prefer to travel light, but I may have miscalculated this time – so I made enquiries about the hotel laundrette. It would cost S$16 to do a load of laundry, and presumably take some time, so I decided to just go and buy some new clothes instead.

Robinsons Department Store (established 1858) in the nearby Raffles Centre shopping mall is a bit like the Singapore version of Myer. Except that it is far better staffed; I wandered around looking for a few things and kept encountering helpful staff members. I was told about three times that I could get a discount if I bought another 3-pack of socks, and kept explaining that I didn’t need them.

Overall in Singapore I found there weren’t too many big chain stores you wouldn’t find in Melbourne. Some exceptions: locals like Robinsons is an obvious one, but Marks & Spencers is another.

I got back suitably equipped for the rest of the stay, and we decided to follow the Lonely Planet book again and head to nearby Purvis Street, for the apparently traditional Chicken Rice dinner.

From the helpful way the staff interacted with us, I’m going to bet they don’t get a lot of westerners in there (perhaps only those following this specific Lonely Planet book), and it was the only shop I recall where they didn’t seem to speak English. But the food was good and cheap.

Another walk around in the heat, and back to the hotel via an ice cream shop, ready for the big Saturday ahead: a day of tunnels, a resort island and a wedding.