Our destination today was Little India, which we reached via MRT of course — the hotel is closest to City Hall station, but only slightly further to Clarke Quay, which is just a few stops from Little India.

The Lonely Planet book we had recommended a specific walk, so we set out, admiring the historic colourful buildings, taking in the sights, sounds and smells, and getting very sweaty in the hot weather. 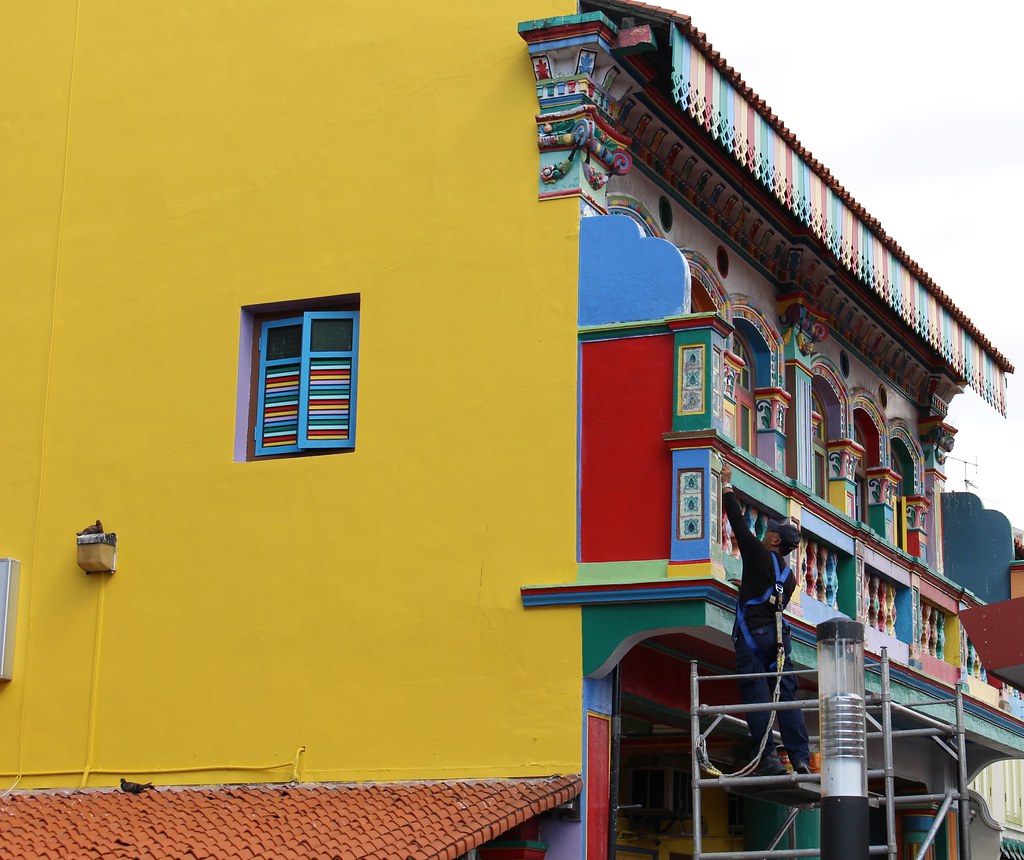 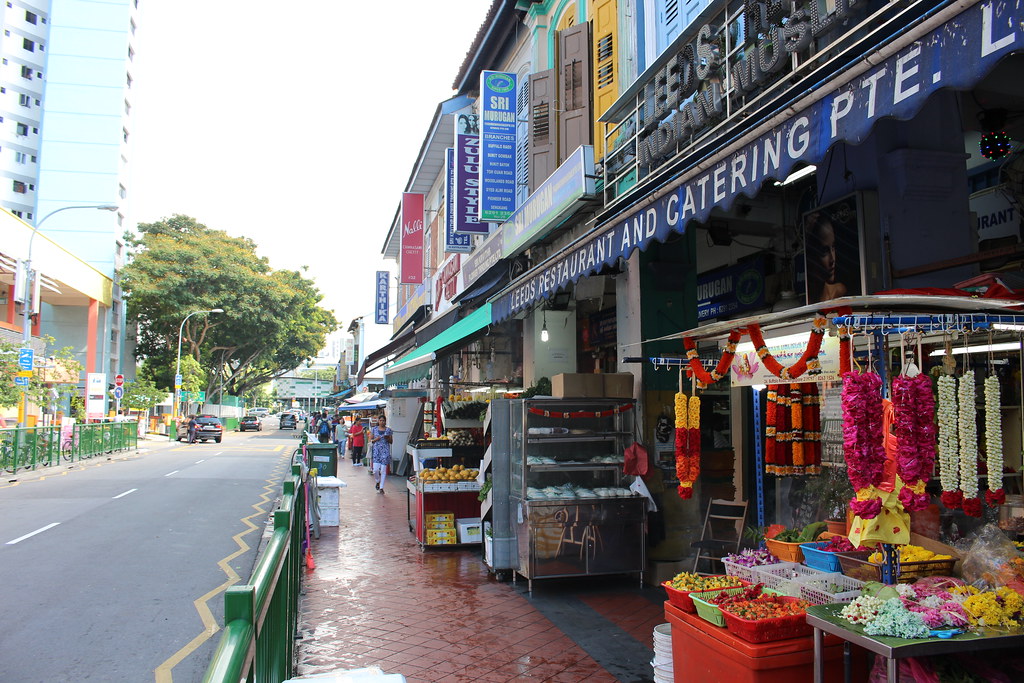 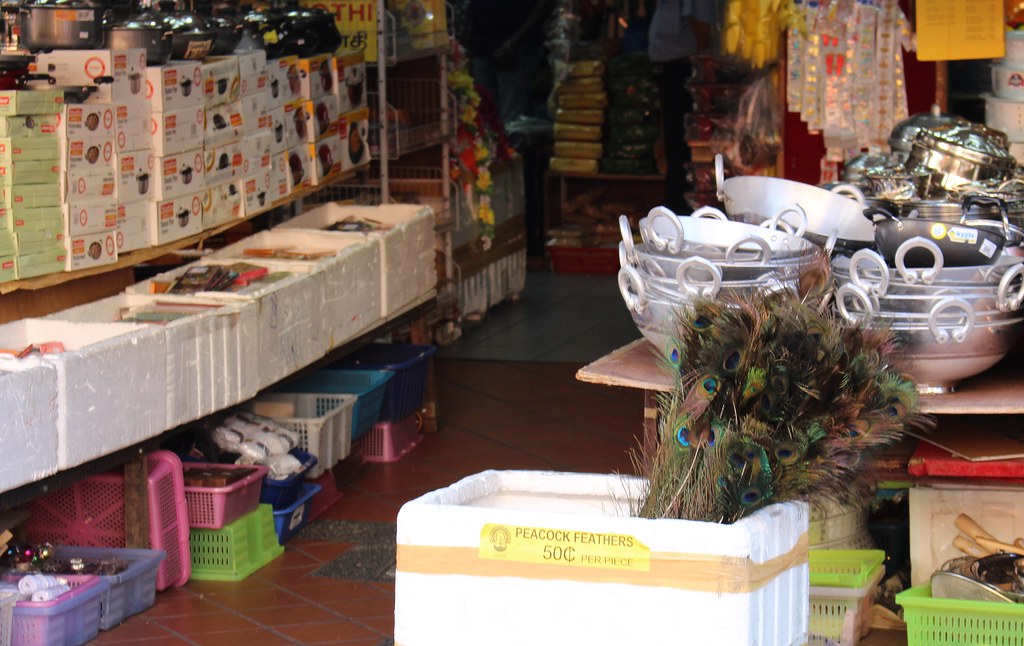 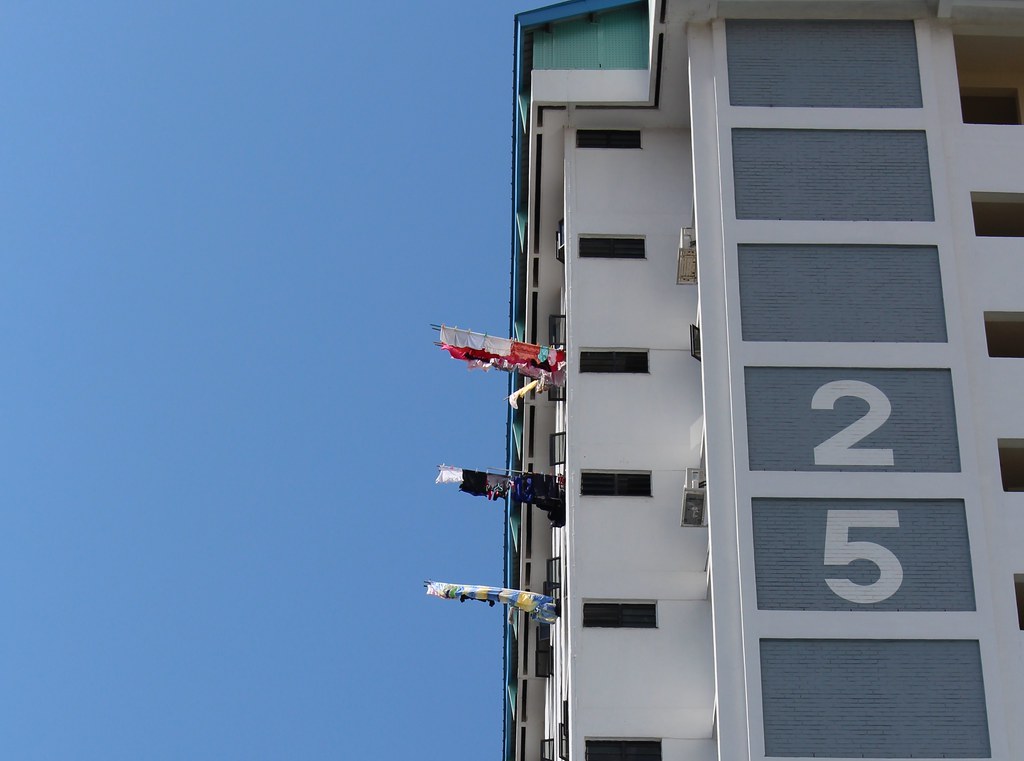 Found by chance (and of interest to myself more than M) was an MRT station under construction along the walk. As we kept going, the Indian shops gave way to mosques – apparently we’d found ourselves in the Muslim section of town, perhaps given away by the thoroughfare name of Arab Street.

The weather seemed to be getting hotter, and we started looking for somewhere to have lunch.

We ended up eating at an apparently well-known restaurant called Zam Zam… on offer were various delights, including fish head curry. We opted instead for murtabak, a kind of bready meaty dish of deliciousness. The food was good, perhaps more important by that point, the air conditioning was excellent.

Opposite the restaurant was the very impressive Sultan Mosque, dating back to 1824, and rebuilt extensively in 1932. 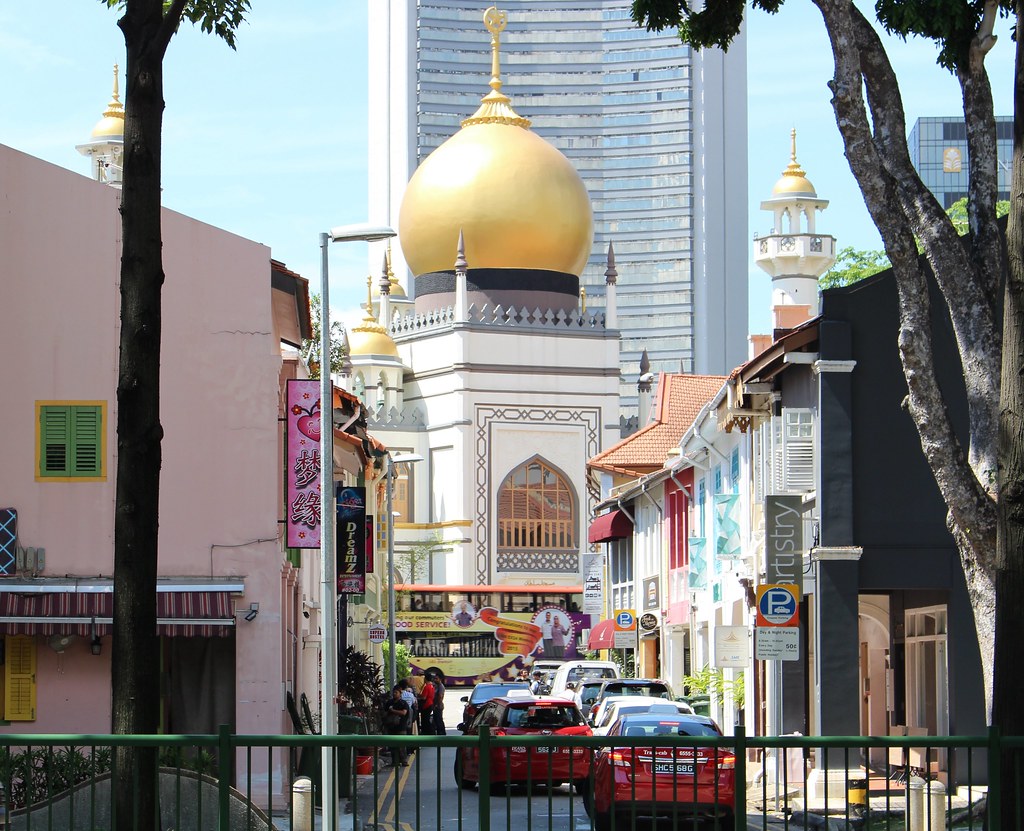 Refreshed by lunch, we decided to walk along North Bridge Road back towards our hotel. Along the way we stumbled across the Parkview Square building, a massive art deco skyscraper opened in 2002.

It’s quite stunning – I love art deco, and the building exterior and the ground floor lobby and bar area was absolutely overflowing with it.

Apparently locally it’s referred to as the Gotham Building, which doesn’t surprise me in the least.

(Click on the photos to see them larger… it’s worth looking at some of the detail.) 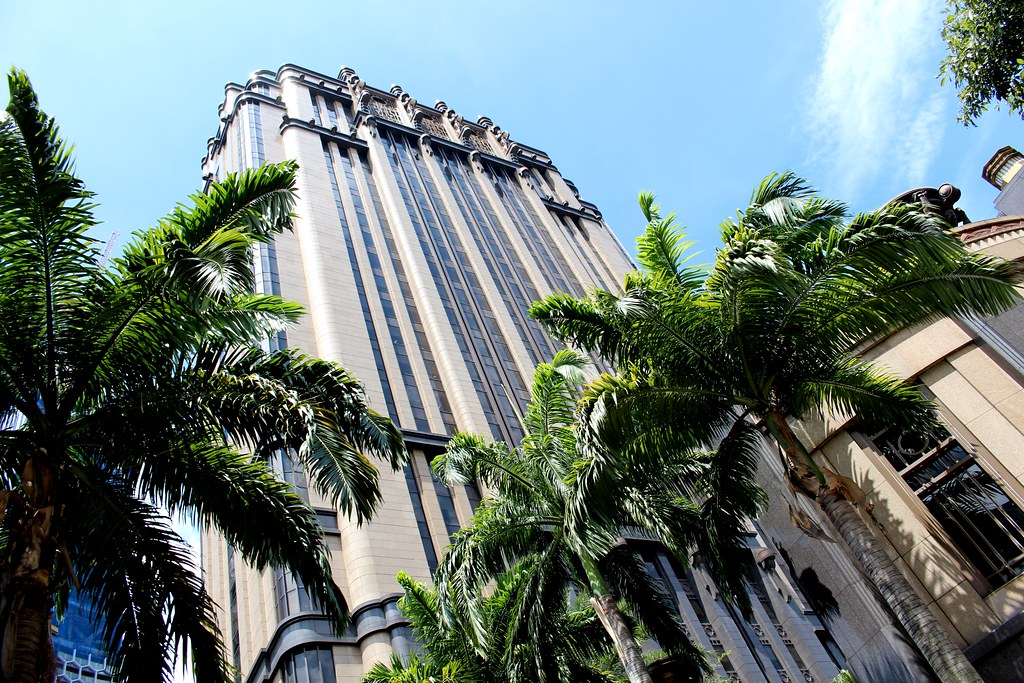 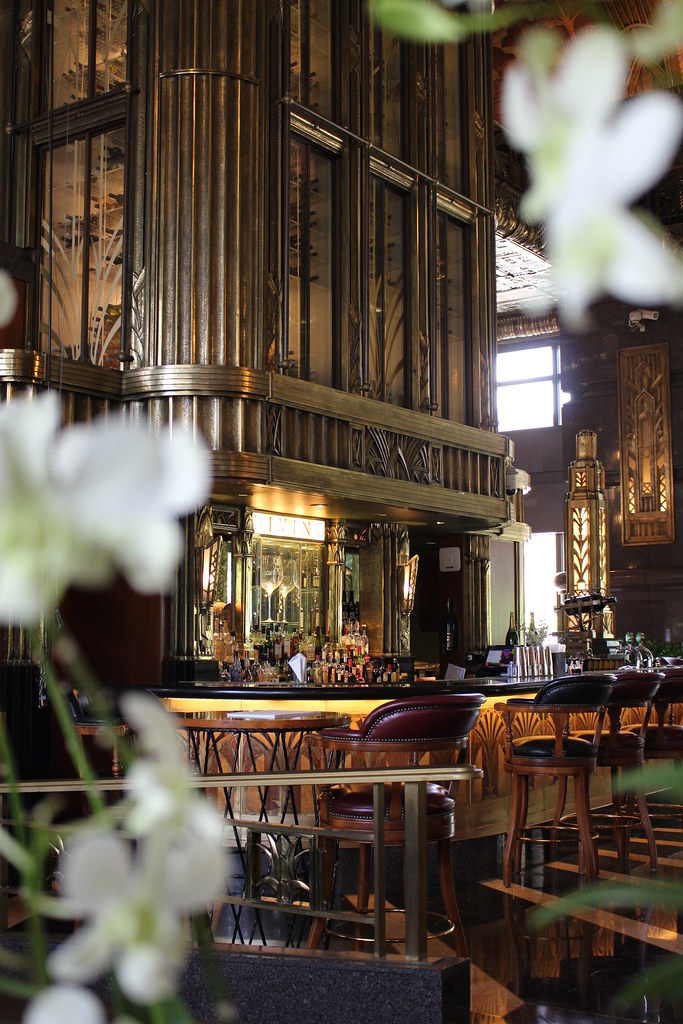 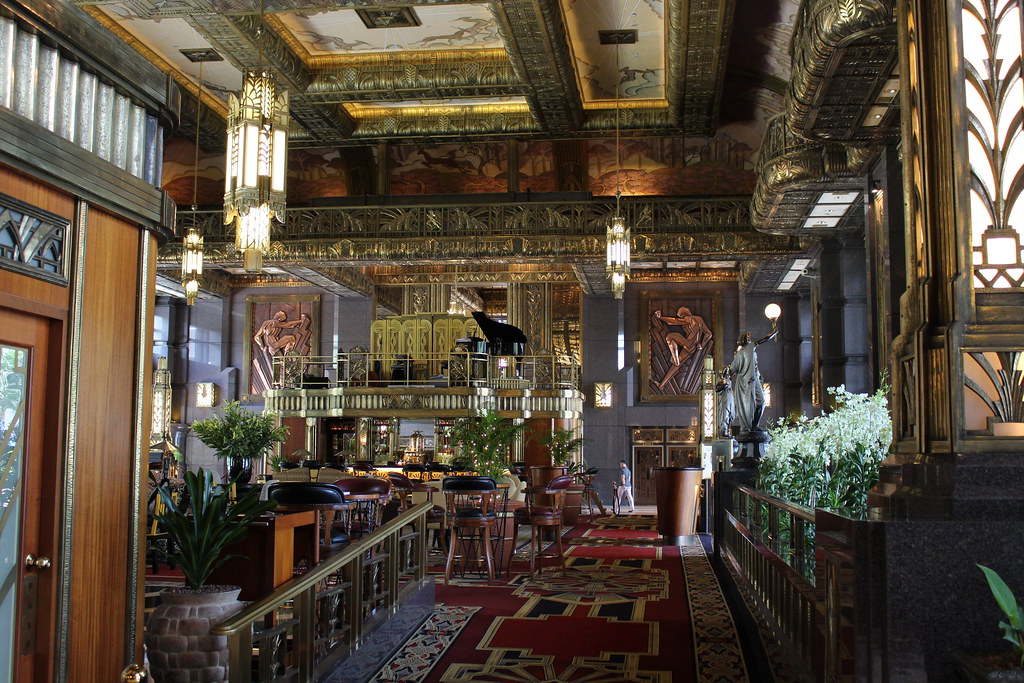 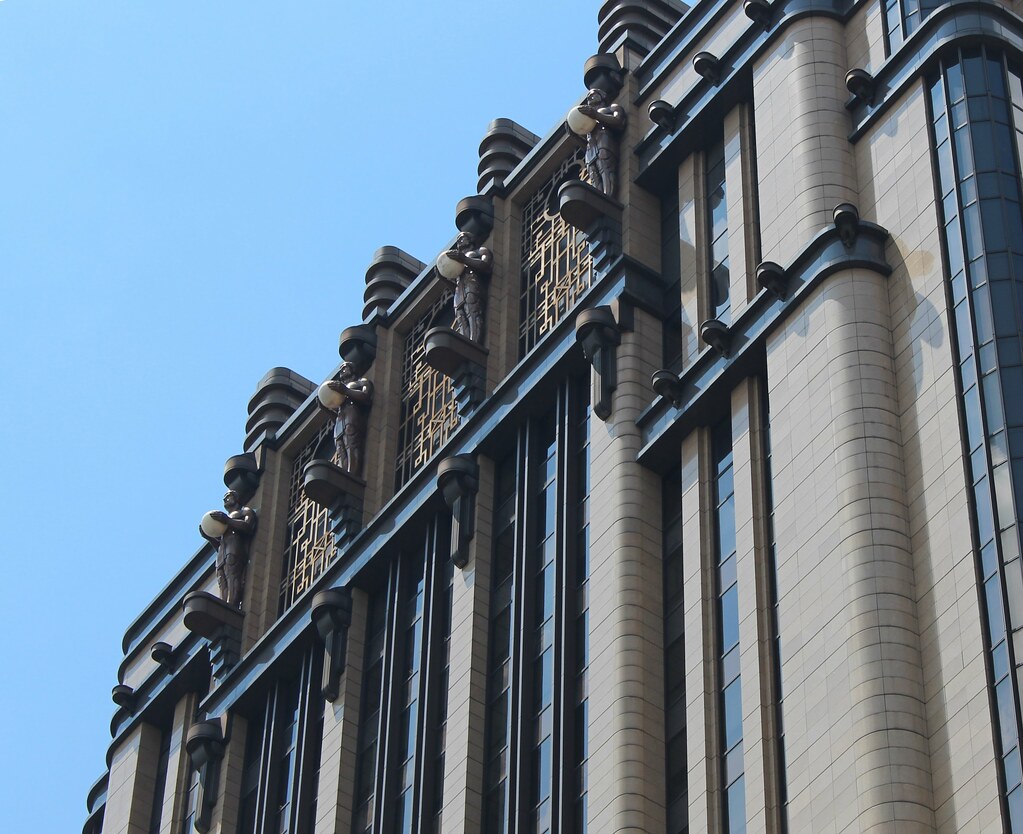 From there we headed back to the hotel, passing the National Library, and a mall of bookshops which proved to be not quite as impressive as described in Lonely Planet – but there was a good bookshop near the top specialising in design and architecture.

Next to our hotel was the Funan DigitaLife mall, which I decided to take a look at. It’s basically six levels of electronics shops, which for a geek like me was great to explore. I had half a mind to see if I could buy a cheap camera lens. Sadly it appears to be closing down soon; many shops were vacant, and the signs suggested the rest only had a few weeks to go – this turned out to be right; it closes at the end of June. 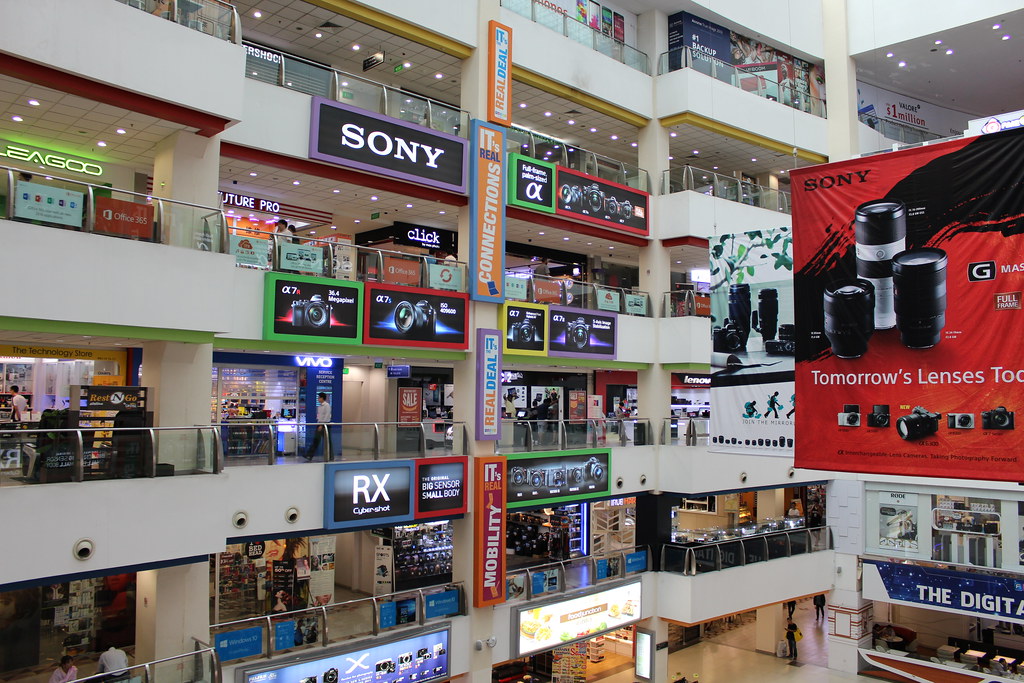 After a rest at the hotel, we headed on the MRT to Orchard Road – well, a bit off Orchard Road – for a dinner with relatives, in a very expensive-looking apartment block. I’d assumed it’d just be a handful of people but it was actually a sizeable group of various relatives – those both resident and visiting Singapore for my cousin’s wedding.

I eventually gave up trying to wrap my head around where all the various people sat on the family tree. I’m told that in Chinese culture, everyone of the appropriate age just ends up being called Aunty or Uncle or Cousin, no matter what the actual relationship, and I can certainly see the benefits of that. It ties in with the sense of hospitality – if you’re family, even remotely, you’re welcomed with open arms.

After a thoroughly delicious buffet dinner and a great catch-up with the relatives, we headed back for the hotel.

One of the most curious things about Singapore, is the absence of Chinese shop signs, in comparison to Sydney.