I haven’t seen the detailed station plans for Ormond/Mckinnon/Bentleigh (aka the North-Mckinnon-Centre grade separations) online anywhere, but they are on display at the semi-regular public sessions.

Here’s how they look, with some notes from me.

Any misinterpretations of the plans are my mistake. In all three diagrams, north (to the city) is to the left. Click on any of the diagrams to view them larger. 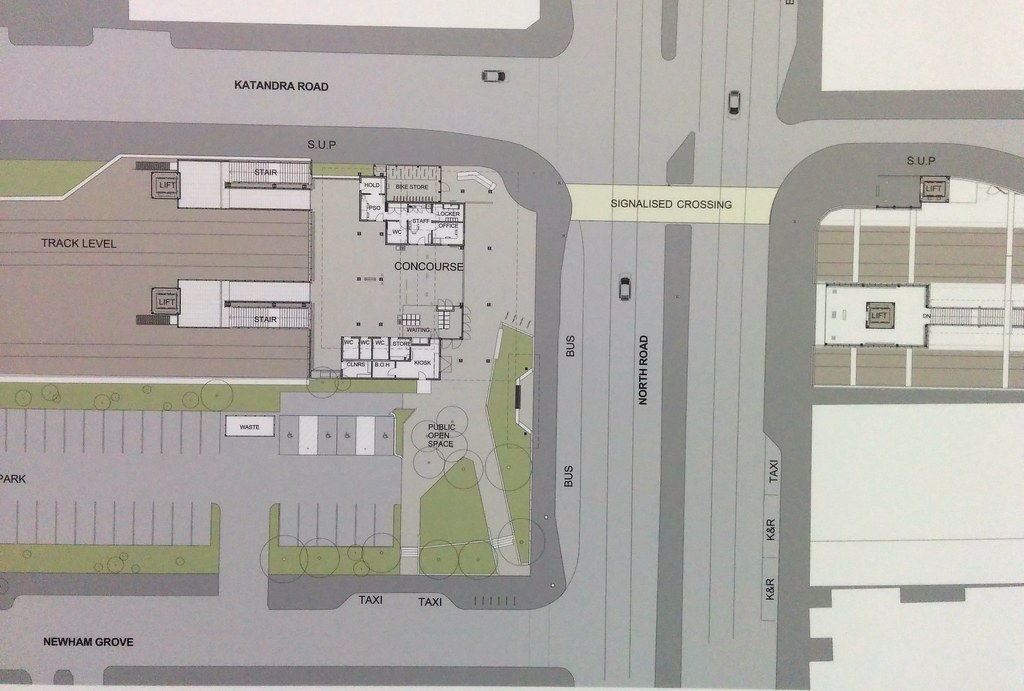 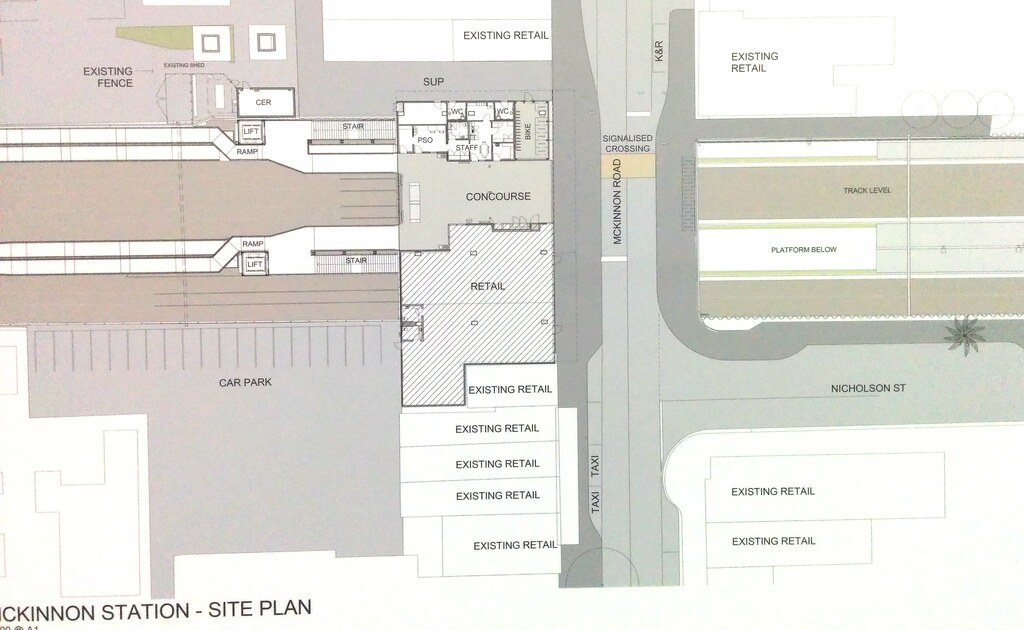 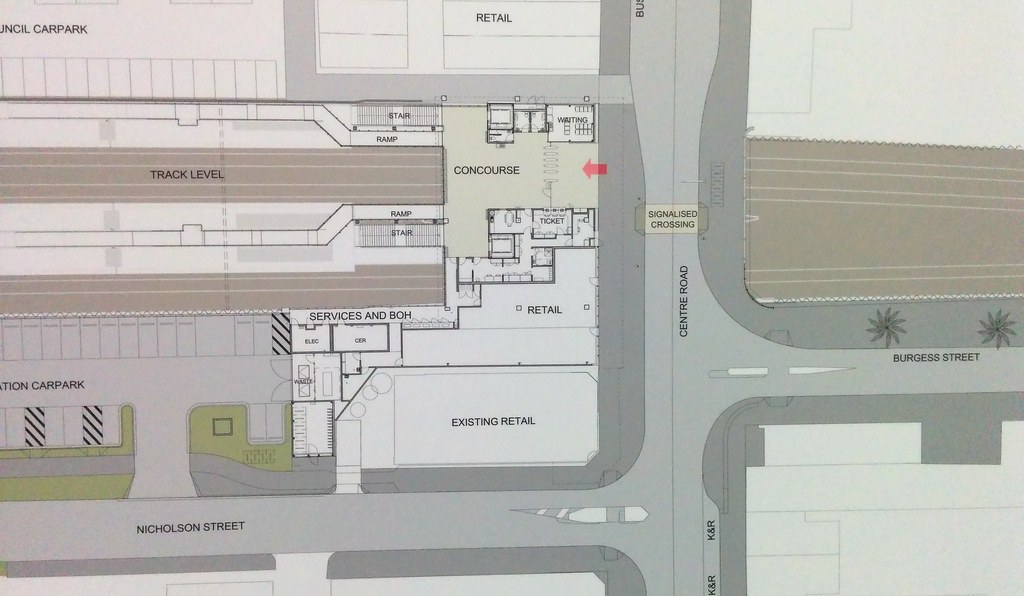 Here’s what the Myki gate line looks like at Parliament (north end). 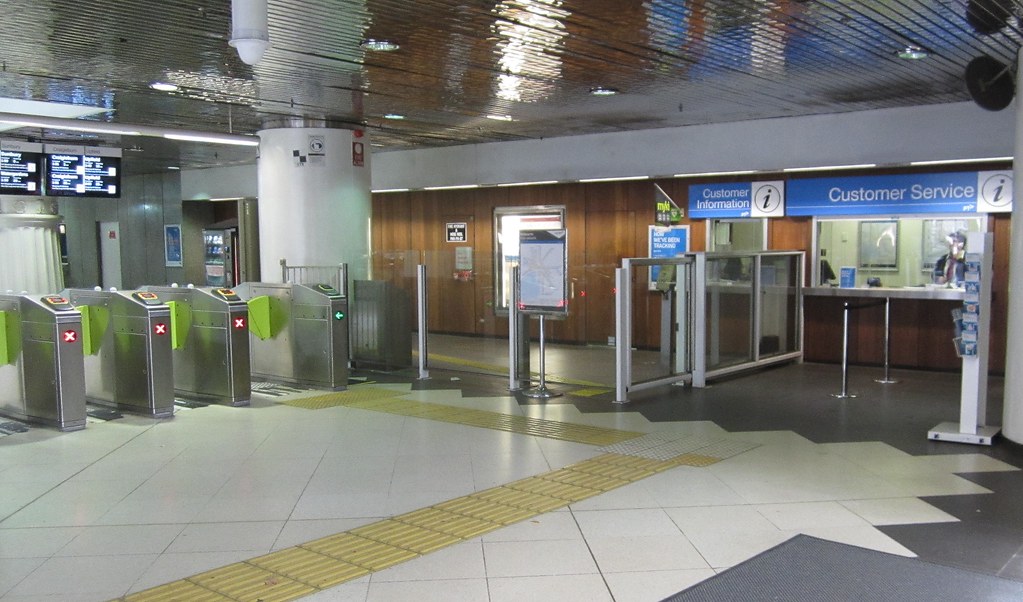 For Bentleigh station users, note that from today, access to platform 1 (Citybound) is via Nicholson Street. The station itself closes at the end of next week to be demolished, but the rail line will be open for another three weeks after that before closing on 24th June for the major works period of 37 days.

Mckinnon, the least complex of the three stations, will re-open first (though not in a completed state) on 1st August when the line re-opens. Bentleigh and Ormond will re-open at the end of August. The third track will re-open in September.

The bigger question – why isn’t this level of detail appearing on the Level Crossing Removal Authority website?

I understand the reluctance to put in compliant ramps and I think that two lifts should be enough. However the single lift to platform 1/2 at Ringwood has already been out of order at least once for three days since it opened in mid last year.

Also, I am not sure I entirely agree with the concept of lifts being “tucked slightly out of the way so hopefully only those who need them will use them”. All too often things like lifts, disabled toilets and disabled access doorways are tucked out of the way and are sometimes hard to find. This often means that a mobility impaired person has to cover more distance to get somewhere than an able bodied person. The concept of desire lines still applies if not more so when you are disabled.

I would suggest a better approach would be to provide enough lift capacity in a prominent location so that it did not really matter if people who did not need the lifts used them.

Couple of comments about McKinnon – two public toilets located on the east side of the station building (top of plan) opening off the SUP to the car park. Apparently these are true public toilets and will be maintained by the council. Given their tucked away location, I wonder about vandalism.

Note there is no access from the western station car park (bottom of plan) to the station except by going right around the block of shops at the bottom – out by the access laneway, along Glen Orme Ave, and then back along McKinnon Rd – about 150 metres. The access laneway is a true lane – barely wider than a car – and it also provides access to the rear of the shops. I wonder if there is an OH&S issue with expecting pedestrians to regularly use it? There is certainly no space for a separate pedestrian walkway. Oh, and that large grey area in the lower area of the western car park is actually private land – it’s the rear of the ‘existing retail’.

Not sure if you’ve seen it Daniel but there’s a great photo opportunity at Bentleigh. On platform 3 about halfway down, the “[ Bentleigh | 3 ]” sign (like the one pictured at the top of this article) has been accidentally hit with some kind of grey silt. It’s made for a great ‘construction site grunge’ version of the typical PTV sign!

[…] To counter that, transport blogger Daniel Bowen had to attend an irregularly held public information session in person, photograph the hard copy plans, and then write up his interpretation of them. […]

@Marcus, I agree completely. As you’ve noted in your blog post on this, the LXRA is finally publishing some good information on the Dandenong skyrail project, but it’s months too late.

@Chris Lowe, fair point, perhaps I didn’t capture the nuances of lift location. I think it depends on the context. Example: at Flagstaff the lift from concourse to platforms is commonly used by able-bodied people to reach the lower platforms, partly because at concourse level it’s very prominent. I’m not sure why when the waiting time for the two escalators is usually nil. In contrast this doesn’t seem to happen at Melbourne Central Station.

You’re right about desire lines. I don’t think lift locations should be a longer distance away. But I do think where there’s a danger that those requiring them might be crowded out, they shouldn’t be as prominent as they are in the Mckinnon and Ormond designs; right in front of you as you enter the station.

It becomes really problematic at some shopping centres that are poorly designed where you can end up with large numbers of people who don’t need to use the lifts crowding out the people who do need them – because it’s a long way to find an escalator. On reflection I hope this won’t happen at these stations, given it’s only one level down to the platforms.

@Anonymous, thanks – the council flagged the situation with the toilets at Mckinnon some time ago, but it slipped my mind. Yes it’s a shame they are off the street; the old toilet block position was at least a bit more visible.

@Matt, thanks, I hadn’t noticed, but snapped a photo this morning!

Good to see the plans on this project.

Springvale is also below the water table level, therefore Bentleigh and Mckinnon could be more like the way they built Springvale.

Keep up the good postings Daniel, with thanks from me.

Dear Daniel
I was wondering if you had any copies of the plans for the new McKinnon Station and the new bus stop locations? Thanks very much in advance, Keren

@Keren, what I have is in the post. As mentioned, the bus stops are to remain just east of the railway station, with the new pedestrian crossing meaning the westbound stop is more easily accessible.

[…] end result will be three stations below road level, but first all the dirt has to be dug […]

[…] Under the station building facing North Road is the deck for the concourse, as can be seen in the plans: […]

[…] construction was well underway, and detail was still sparse – again Daniel Bowen had to visit a public information session to see plans of what was being […]