On the weekend I was chatting about the Dandenong skyrail proposal to rellies at their house near Hughesdale station. They are keeping an open mind; they are not immediately under the rail line, and they can see the obvious benefit from getting the level crossings removed quickly, but are concerned about some aspects, which it sounds like are not being adequately explained.

For instance: condition and maintenance of any parkland created by the elevated rail. The Level Crossing Removal Authority (LXRA) seems to be forming the view that they would fund at least ten years of maintenance.

And of course after media attention last week a lot of local chatter is about the future need to expand the line to four tracks. (Three tracks isn’t nearly as useful as four.)

It’s worth noting that the skyrail project, along with other measures, buy a lot of extra capacity for the line.

How much? I’ve been trying to work it out, but official information is really scarce. The official figure thrown around is 42%, but this doesn’t seem to take into account all the upgrades. 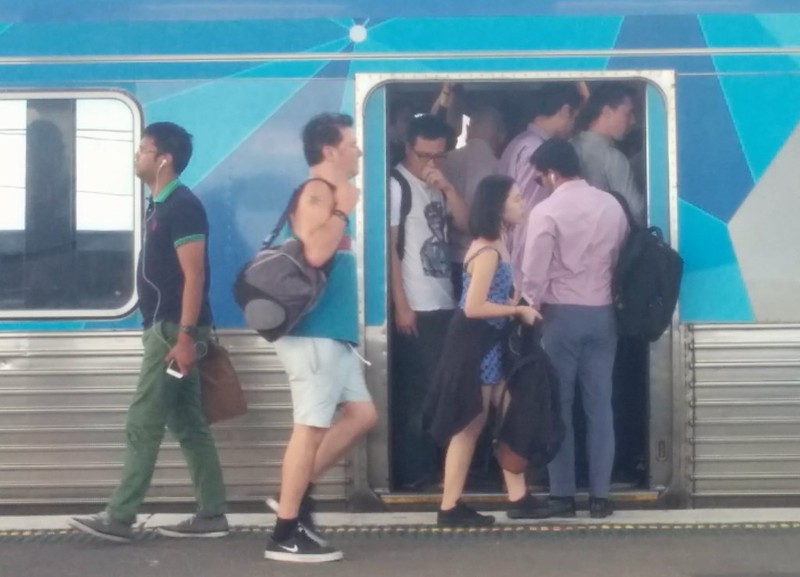 Looking at what might well be the busiest hour, inbound AM peak 7:31-8:30am at Caulfield, there are 15 Metro services and 2 V/Line services scheduled, or 17 trains per hour in all.

The current signalling allows for a train every 3 minutes, or 20 trains per hour. The widely used practice is to use 80% of the theoretical capacity (to allow for short delays), which means the line is using just over its practical capacity. No wonder delays so easily occur.

Each train’s desired load standard is 798 (133 per carriage), but seat modifications currently underway are meant to increase that to 900 (150 per carriage). Remember, this is NOT a capacity figure.

Firstly, the signalling (with conventional technology) to allow a train every 144 seconds (eg 25 trains per hour), in line with a long term plan that was kicked-off with the Westall upgrade project some years ago.

Staying within the 80% of theoretical capacity (so it runs more smoothly than now) therefore gives you 20 trains per hour — 18 Metro and 2 V/Line.

Why not high-capacity (in-cab) signalling? They want to prove it first on the South Morang line — not unreasonable given the complexities of shared running between Metro, V/Line and freight. What they are saying is that any upgrades in the mean time will be future compatible with in-cab signalling.

Secondly, you couldn’t just do the signalling upgrade without removing the crossings, because it would lock up the road system across the south-eastern suburbs, delaying motorists, pedestrians, cyclists and bus users alike. So grade separation helps unlock that track capacity. 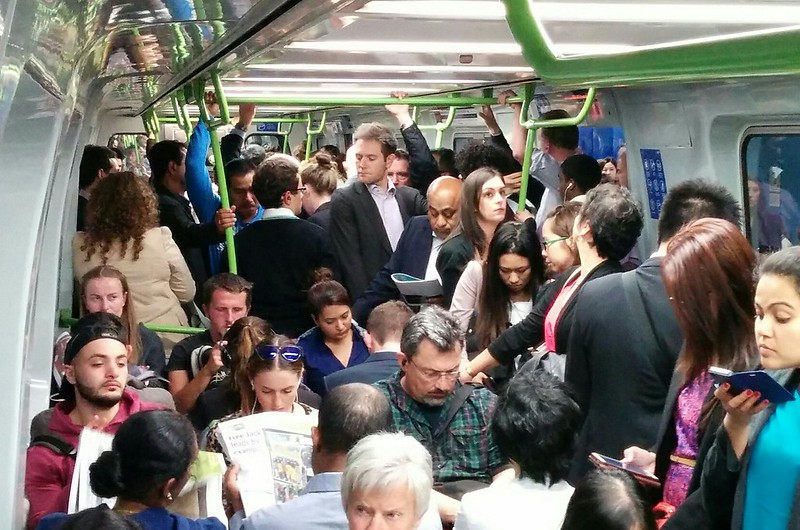 The third major point is the trains to run on the line. The new High Capacity Metro Trains (HCMTs) will run on the Dandenong line in the next few years. As detailed in this extensive post from last year, they’ll start as 7 car sets with a load standard of 1100 people (157 per car).

This is achieved by having continuous usable space and, I expect, fewer seats. Hopefully a balance will be found between carrying capacity and ensuring those travelling the longest distances can get a seat.

Longer trains obviously involves extending platforms — something not possible in the City Loop, but included in the Metro rail tunnel and the rebuilt skyrail stations. It will also obviously be necessary on all the other stations out to Cranbourne and Pakenham, as well as Sunbury (as the rail tunnel will connect them).

Put it all together – what do you get?

Somewhere in the mix would need to be duplication of the Cranbourne line, and flying junctions (overpasses) at Dandenong so trains don’t get delayed waiting for each other there.

So, pulling together all the various upgrade figures (which have been gleaned from various government information — it doesn’t seem to all be in one place anywhere), what do we get?

The government often quotes a 42% capacity boost. As I understand it, that figure includes the level crossing removals and new trains, but excludes the metro rail tunnel. I’m trying to find out how precisely they get that figure, but taking the tunnel into account, it woefully undersells the true capacity boost anyway.

Perhaps these numbers don’t exactly tally with the official ones, but 28,000 per hour is huge. That’s about the equivalent of 12 lanes of traffic. Behold, the power of mass transit!

From trying to explain some of this to my relatives, it’s clear to me that the government/LXRA hasn’t communicated this point very well (if at all).

With all these upgrades, a huge amount of extra capacity is provided, much higher than the quoted 42%, putting off the need for extra tracks for many years.

How long will this last? Well, that depends on the future growth along the corridor, obviously. Capacity can grow even further with high-capacity in-cab signalling, provided it’s okay to have all trains (including V/Line) run at a consistent speed. That should allow enough trains to provide a line out to Rowville.

Hopefully I haven’t messed up these figures. And this is not to say that planning shouldn’t happen now for future track expansion.

But if basically you’re more than doubling peak capacity by 2026 when the metro tunnel opens, that’ll take a while to fill up again.

A great summary, thanks – I hope that protesters don’t stymie the skyrail project.
PS. A small editing issue with “onal technology)”

Even the middle of the day gets quite busy on the Dandenong line. It wouldn’t be too much of a stretch to have 3 trains every 20 minutes originating from Pak/Cran/Dand every 6-7 minutes.

The Ringwood corridor gets shorts to Box Hill/Blackburn. The Dandenong line does not, yet it needs them just as much.

I have put in a submission with the following,

I support elevated rail over any kind of underground or below ground rail, as I value having a view to see out of my train window. I object to this project not being done with all four tracks. Even if you only have four tracks in these sections, it would provide opportunities for express trains to overtake local trains. Furthermore, it should be done as part of two other projects. #1, Extend the Alamein line, creating a very useful cross city route, Camberwell – Oakliegh – Dandenong #2, The Rowville railway, which should be a mix of elevated and road level.

I guess like anything else, there are always +ves and -ves with any idea.

Sky Rail will definitely in theory at least, benefit the majority of train users and probably only affect the minority who live within 500m of the elevated track.

Does this really mean though the residents of Springvale have it best? An underground rail yet do reap the benefits of the skyrail service?

Whether or not those numbers are accurate, it says nothing about fast trains from Gippsland.

If the Metro portion of the network goes to 18tph inbound from Dandenong, we’ll need to either run the Gippsland trains even slower than current, or terminate them at Dandenong or Pakenham and tell everyone to change trains there. There’s also problems with mixing freight trains in, i.e. Maryvale paper train, the Gippsland Intermodal Freight Terminal, Brooklyn to Westall quarry train and anything to Dandenong South terminal. (I can’t see the Lyndhurst cement, Bairnsdale log or Koala siding sand trains returning any time soon.) Also – empty car transfers to/from Bombardier, whether VLocity or NSW railcars.

@David, not sure why V/Line would be any slower than now (with 16-17 Metro tph). Yeah it’d be nice if they got a quick run, but that alone doesn’t justify the cost of extra tracks. Does anybody drive into central Melbourne in peak and expect to do 100-110kmh all the way?

Freight and empty cars – why would they need to run in peak hour?

Extra two tracks can’t be justified by just one service, but they’re absolutely worthwhile when you take the sum of V/Line, Freight, empty cars etc. If the Metro pair of lines runs every 4 minutes through daylight hours (merging with every 4 minutes from Frankston for a 2min service Caulfield to City Loop), there’s no slots for anything with a different power:weight ratio, or anything much longer than the typical train.

Also, slower trips mean you need more rollingstock to provide the same service frequency. If a line is 2hr30min each way including catchup time, then a 15min service needs 20 trains. If you can shave that down to 2hrs each way then you only need 16 trains in service, so you could either put those on other lines or increase the frequency from 15min to 12min.

The express tracks Caulfield to Dandenong could save up to 18 minutes against the current timetable (with line speed 115 km/h), and a further 10min if line speed Dandenong to Pakenham was boosted from 115 km/h to 122 km/h, since conflicts around Dandenong would also be solved by having short turnbacks forming the stopping trains, separated from the fast through trains. And there would be enough capacity to not need to worry about the difference in speed between freight and V/Line trains.

Freight long-term projections are roughly one train every 30 minutes, 600m long, right through the week including peaks, plus steel train and anything else to Hastings, plus quarry, paper and gippsland container trains.

The V/Line passengers are getting pretty pissed off with the delays and having to change at Pakenham. I doubt they will accept having to stop there permanently. I can’t even go down to Gippsland to see my sister’s baby due to no reliable train service on the weekend.

My experience of 23 March on Dandenong line Koornang Rd at 4.40pm, gates closed. Reopened 5.04pm with 8 trains going past (5 towards city some empty and 3 to Dandenong). The car queue stretched from Dandenong Rd to railway line, and from railway line to Neerim Rd. Totally unacceptable. Get rid off level crossings ASAP, SkyRail or no SkyRail. But if SkyRail gets you there quicker do it. The worst is the Glen Eira Council, which plays politics all the time. Being a Liberal Council they oppose anything that the Labor State government are doing. STUPID.

One of the most interesting & comprehensive explanations I’ve read to date with some actual real facts. I’ve saved this page offline so as to let my A/care staff read it as well