This point seems to come up for discussion online regularly, but I don’t know if the information is easy to find, so I thought I’d have a go myself.

There are regular claims from those pushing it that East West Link (stage one, Eastern Freeway to Citylink) is needed to prevent traffic chaos. The problem with these claims is that Vicroads arterial road volumes data shows that east-west traffic in the area is not increasing. Some routes are actually dropping.

First of all, here’s Alexandra Parade, which the tollway would aim to replace for through traffic. As you can see, traffic volumes in 2013 were about where they were ten years before, and haven’t shifted more than 10% from the 2003 figures. 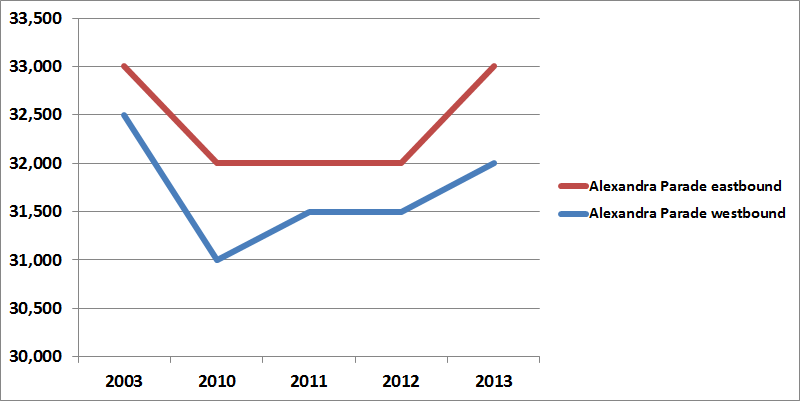 (For each road, Vicroads has many data points. For Alexandra Parade I’ve plotted the median for all the eastbound, and all the westbound points, to try and show the overall trend, rather than pick one specific spot. Also note the gap in years from 2003 to 2010: this reflects the data published by VicRoads.)

But what about nearby and parallel routes? Turns out they are almost all steady or dropping in volume too. 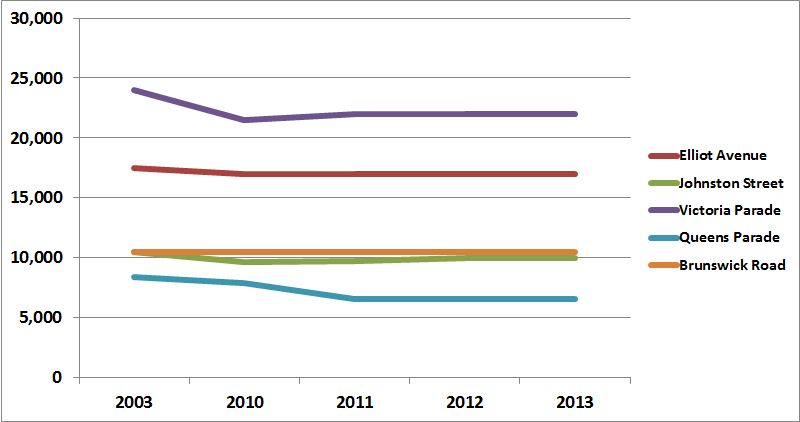 You can’t see it in the graph, but the one notable exception to the flat or dropping volumes was Brunswick Road, eastbound at the Citylink end. At two locations, traffic volumes are up from around 12,000 to 16,000 vehicles per day (between 2003 and 2011), though at every other data point, and westbound, traffic volumes are steady or down slightly. The rise may reflect increased growth on Citylink over that period, following tolls being placed on the road in 2000.

But mostly east-west traffic volumes in the area are steady or dropping.

Elliot Avenue is particularly worth noting, as it is the logical path from the end of Alexandra Parade to Citylink. It too is steady.

We all know that East West Link fails on business case grounds. From these figures it also fails on the basis that we should simply build it because traffic is increasing. It’s not.

What will happen if it’s built is that overall traffic will increase. But that’s a different question – one I aim to discuss in a future post.

5 replies on “East-west traffic is not increasing”

I have no doubt that the EastWest link will be built one day.

I just hope we can get some decent public transport in the meantime.

Interesting study. Here’s some other factors that I suspect might also be at play.

Johnson street shows a noticeable decline around the time they reduced it to 40km. Its an horrendous road to use that goes nowhere and I only use it when traffic congestion forces me onto it. I always regret that choice!!

Victoria street is cursed by terrible traffic light mis-synchronization that favors the terminating side streets (especially on the east melbourne side) and this needlessly grinds the road to a halt. Adjacent lights work in completely opposing cycles and because of that it quickly fills with traffic blocked at either one or the other. Which ultimately fills the road up with stationary traffic that goes nowhere. The new lane realignments (swerve left, swerve right, then swerve left again) have also made this road unnecessarily dangerous to drive.

Elliot Avenue is interesting. I would have expected it to increase. I’m wondering if part of the reason is that both it and alexandra parade are already at capacity most of the time (including weekends) and there’s little room for traffic to increase further. One of the things I do notice when i take it is that MOST of the vehicles that start at one end with me are still traveling with me when I finally reach the other side. Suggesting there’s a lot of cross traffic. There’s a lot of simple things that could be done to increase through traffic here on the existing road (eg the three or so parked cars that permanently gridlock west flowing traffic immediately after nicholson street) but strangely no one seems very interested in improving things. Traffic light synchronization is also an issue in peak times. The lights are green whenever the traffic is stationary (mysteriously held by the next red light) however the second the traffic does begin to move again the lights change against it preventing it getting anywhere.

Brunswick Rd I use far less often – it’s hard to get on and off from – and for me is only really a choice when an accident elsewhere that forces you onto it.

@Andrew, thanks for putting the figures in some context.

You’re right that roads at capacity are unlikely to increase in traffic levels. This doesn’t mean they should be widened or duplicated – that will almost inevitably result in more traffic.

They *should* be widened or at least be optimised so the traffic flows better in this case. There’s no realistic public transport options along that corridor.

[…] and long term, it would have made little difference to congestion on a corridor where traffic wasn’t increasing […]