Chadstone Shopping Centre, perpetually in a battle to maintain its status as Australia’s biggest shopping mall, opened a new bus interchange in August.

I finally got around to seeing it just before Christmas. 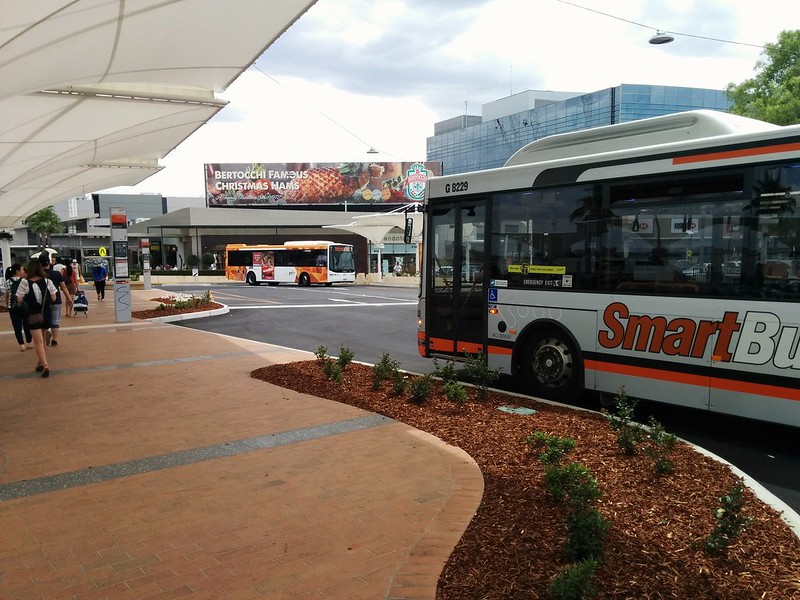 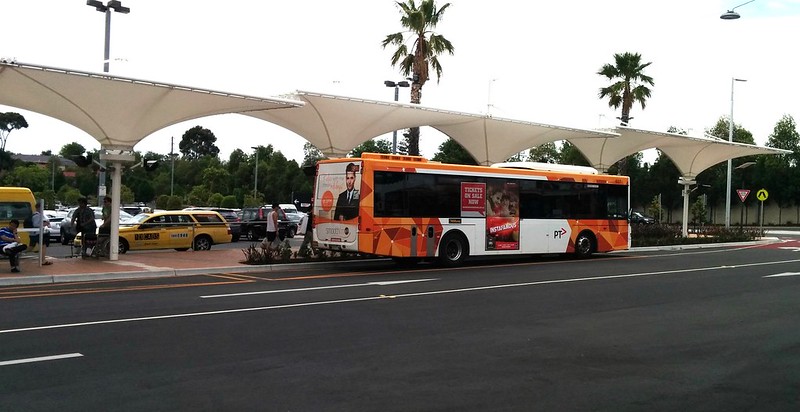 This nonsensical signage is brought to you by the good people at Chadstone Shopping Centre @fashion_capital pic.twitter.com/zzPdqoYK0H 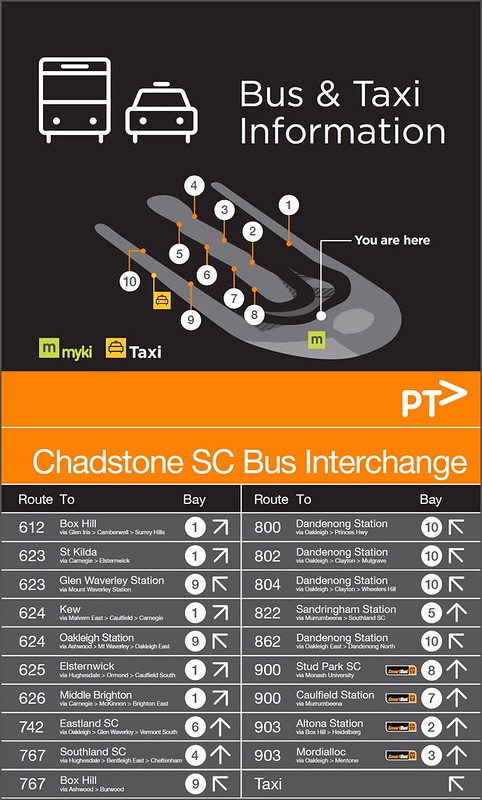 Do you ever get the feeling they have nobody considering how actual passengers will use these things? 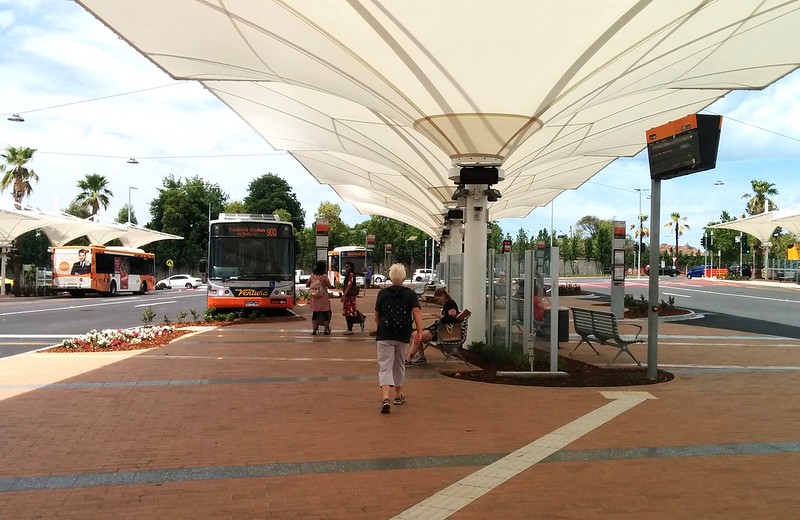 Certainly it’s an improvement over the old interchange, but I suspect that with a little more thought, it could have been so much more usable.

And of course the biggest problem remains: most of the bus routes are hopelessly infrequent, with mostly hourly services on the busiest shopping days — weekends and public holidays.

16 replies on “Chadstone’s shiny new bus interchange – the good, the bad and the ugly”

Was a bunch of people getting off the 900 bus on Boxing Day so someone must use it. I often get the 900 bus home from Oakleigh to Carnegie even though it is only 3 stops since I do not want to wait at the train station.

I was dumbfounded on boxing day to see that it was basically hourly services on a day when literally tens of thousands of people were there. There was an endless stream of people walking to/from Hughsdale station (which I had to resort to myself) because the only other choice was waiting up to an hour to attempt to get onto the bus with hordes of other people. Does nobody plan anything in this city? Cmon, I’m pretty sure we have Boxing day each year..

I have to say the best non CBD shopping bus or rail or bus & rail interchange is Bondi Junction. Its no ideal but it works. Though it isn’t directly connected to Westfield Bondi it works well enough though not ideal when it rains.

The ideal type of bus interchange in base design theory is something similar to Blacktown or Bondi with it being fully covered with screen doors as the bus arrives so diesel fumes ain’t a problem but most buses at Bondi interchange are CNG.

Though Chadstone is more spacious Bondi Junction probably one of the more busiest interchanges in Australia outside capital CBD areas. We have the problem at Bondi Junction where people exiting from the station wanting to go towards Westfield Bondi conflict with the queue of people wanting to go Bondi Beach. So you have to squeeze your way through the bus queue just to get to the main front entrance. Ideally it would be reversed so the Bondi Beach main services leave from the rear of the interchange not conflicting and the thing be flipped around. So importantly not having conflicting passenger movements.

Ideally bay grouping is important they have done that well at many interchanges including Bondi Jn. Examples of screw ups Chadstone and Macquarie Centre in Syd.

So stand layout is very important otherwise it can be very uncomfortable similar to the Macquarie Centre in Sydney the largest shopping centre in Sydney bar Westfield Sydney.

It looks kinda European with those type of bays it isnt ideal though for long buses such as 14.5 m rigids or bendys pulling out. I prefer marked with lines bays but with straight bays or normal bays it doesn’t look as nice as the bays at Chadstone.

Though much better than a certain shopping centre I know which has a giant hump at the exit of it. So exit wise I have to agree Chadstone ain’t great but in comparison to others in Australia average.

The new shelters are not effectively designed to adequately protect from rail and sun that is not vertical or nearly vertical.

I will say that, perhaps Chadestone is to get more than one bus stop for all buses that use it, to pickup/drop off more conveniently for passenger/shopper people.

As you have said, at least all bus routes use the same terminal. Perhaps we could have all buses operate in a circle around the center, say all in a counter-clockwise direction so all buses shall be facing the curb of the center, and then we would only need one single bus only lane around the whole thing.

I shall hold back on further comment until I have seen the place myself.

Daniel
things have come along way since I went to Chaddy on the bus with my mum in the mid-1960s.
A fair and balanced report of the new transport hub.
I wonder what the average spend per Chadstone visitor is by mode of transport? Those arriving by car might spend twice as much as those using PT. Perhaps that’s why Chadstone planners put more effort into providing car spots and PT is an after thought. Perhaps someone has some actual data on this?

The interchange seems a fair bit more better shaded than the new interchange at the Werribee Plaza (or Pacific Werribee as it is now known).

Until Chadstone is forced (obliged? Bribed?) to provide fixed rail service, I’ll ignore the place. I live in the midst of a thicket of trams and trains; they are all frequent and attractive ways to get to Melbourne’s best shopping and entertainmen, the CBD.
Chadstone is a wannabe city with hardly a single decent public transport option; no sane Melbourne -wide planning system should have ever allowed that car based monstrosity to be built and endlessly extended.

@Alan Laz
Even if Chadstone wants to provide rail service, there’ll be state and council agreements to be in place, plus the acquisition of land from private land owners.

Plus a spur line to Chadstone isn’t the most cost effective solution.

Perhaps if the number 3 tram can be extended to East Malvern station and then onto Chadstone.

How would a fixed rail service help Chadstone? Holmesglen and Hughesdale are only a K or so from the shopping centre as it is, and extending route 3 (and its numerous non-DDA-compliant Z classes) or running another line from Caulfield down Dandenong Rd (Princes Hwy) would be prohibitively expensive, although still shorter than the distance between Vermont South and Knox. All Chadstone really needs is a shake-up in the bus timetables in order to make it better for public transport users. A bus running once an hour to and from the largest shopping centre in Victoria is a joke.

Speaking of one Chadstone bus, I still think Ventura should merge the 742 and 670 into one long route. Giving the outer eastern suburbs a direct link to Chadstone without the need to swap and change between other buses and trains can only be a win-win for everyone, and the frequency of the 670 absolutely kills the 742’s once-in-a-blue-moon timetable. Even if the buses still finished at 9 it would be a massive improvement. No other bus from Ringwood would make any sense – the 364 terminates in the middle of nowhere, the 679 is also out of the way, the 271/370/380 are relatively lightly used and none of these routes have any major landmarks where many people would gather (aside from the 380 at Croydon station, which the 670 already serves).

In other news, Happy New Year!

Extending the 3 to Chadstone via East Malvern stations is also a good idea and can be done sooner.

Divert the 67 tram (runs 24hours / 7 days at the moment) to more efficiently access Carnegie station (perhaps the street next to Carnegie Primary, punch through the remnant 1950’s shops fronting Koornang Rd),left into Koornang Rd, cross Carnegie station (or the overpass at Carnegie) and turn right into Dandenong Rd, using the Dandenong Rd median strip to Chadstone. Levy the Chadstone mall for the costs…..
That way, we’d link the Sandringham line with the Dandenong line corridor, perhaps we could also build a loop back to the present East Malvern (Tram 3) line, too.

As a relatively frequent user of the 903 or 767 busses to Chaddy, I’d love to see a realtime information sign for ALL routes visible from inside the centre and on the sign that shows which bays the buses will pull up at. Whatever happened to the”waiting room” they used to have outside Coles that didn’t have a ticket machine (it was pre myki) or cooling but at least it had some chairs and was or if the weather?

I sometimes take the 623 and on a rare occasion a 624 or 767 and man, are they long waits, especially on hot days, you can wait 45 minutes to an hour sometimes. PTV need to do something about that. Also on the topic of the 623 why have the 623 bus to St. Kilda at platform 1, then the other 623 towards Glen Waverley all the way over at platform 9. Something else to add, does anyone else say platforms or something else other than bays, I say bays, but I think I prefer platforms…

Extending route 3 will only work if the diversion via St Kilda on weekends was scrapped. The weekends is where many people are shopping and I certainly would not want to be on a tram from the city to Chadstone if it’s going via St Kilda. It would make catching a bus from Caulfield seem more attractive to me.

[…] new bus interchange opened in late-2015. Today I got to sample how well Chadstone’s buses run on what is perhaps the busiest shopping […]