The experiment continues. This time it’s turned out to be short posts, rather than a ream of news.

The Opposition said the construction should have been at the same time as the North/Mckinnon/Centre level crossing removals, but that might mean large sections of the line out of action all at the same time. It’s probably less pain for passengers to stagger it.

Monday 2015-12-21 — Apart from hot weather policies from Metro and V/Line imposing speed restrictions, it was announced that Metro intend to completely close the outer section of the Belgrave line (beyond Bayswater) on code red days. Replacement buses will run as far as Ferntree Gully, but the four outer stations will be left with no services.

A PTUA member was told by local bus company Ventura that similar policies apply to them on Code Red days.

This is a difficult one for Metro and the other operators. The official advice for a Code Red day is: “Leaving high risk bushfire areas the night before a Code Red Day or early in the morning of a Code Red Day is the safest option for your survival – do not wait and see”

…So basically it means everybody except emergency services should be evacuating the area due to extreme fire danger, so in that context, it’s not unreasonable to abandon public transport services. But will people know about it? How do those dependent on PT get out? And assuming no services run at all on those days, it’s a little out of whack with official advice allowing for leaving early in the morning.

Wednesday 2015-12-23 — A plan for 1136 apartments close to Flemington Racecourse railway station raised the prospect of running trains full time, rather than just during special events. But PTV rejected the idea, citing the connected Craigieburn line as already too full.

There are actually a few questions here: 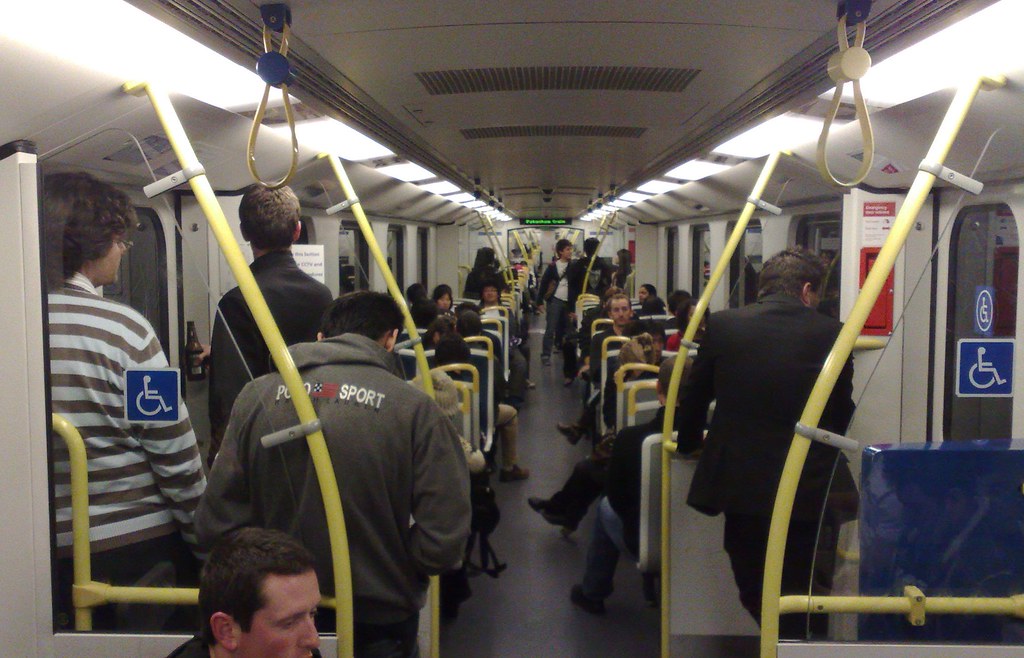 Thursday 2015-24-12 — This article is an interesting read: Some experts believe that Melbourne’s after dark culture will permanently change when the all night public transport system begins next week.

It’s worth noting that the Night Network is weekends only, and of course Nightrider has operated for more than 20 years. But this is a more comprehensive network, with all suburban trains running, even though the frequencies are mostly only hourly.

It can be a bit hard for some of us who grew up in the 70s and 80s (and earlier) to understand, but there’s a sizeable (and growing) part of the population who are used to life without cars, and this will open up late-night (and early Sunday) options.

Night Network is a trial for a year only, but it’ll be fascinating to see how it runs.

12 replies on “The week in transport”

” … there’s a sizeable (and growing) part of the population who are used to life without cars … ”
Your link takes us to an American article. Any evidence of this in Australia (apart from young people staying at home longer and being dependent on parents driving them around for longer)? thanks.

@Roger, I blogged about this myself a while back (and included some sources), but here are a couple of more recent links:

Why are young Australians turning their back on the car? — note particularly the graph showing the number of under 25s with a licence has dropped from 77% to 66% in the past decade or so.

How Millennials are driving the shift away from cars

I would have thought the Liberal Party would be too embarrassed about Southland Station to offer any criticism of the Government.

Re your reply to Roger, what an extraordinary statistic. I’ve asked two people already and they both guessed the number of drivers under 25 who have a driving licence in the high 90%. Could figure this be strongly influenced by recent immigration levels? Certainly not entirely and what a surprising and significant trend.

“Could figure this be strongly influenced by recent immigration levels? Certainly not entirely and what a surprising and significant trend.”

No, the trend is negative in the majority of the developed western world, from the US, to the UK, most of Europe etc. The reasons behind are not well understood, but it is likely a combination of factors and shifting trends in lifestyle. And it’s not a specific demographic either (apart from millennials) – it’s a drop in licensing rates and even further in car ownership for all young people.

The Flemington Racecourse rail spur, a line with only two stations…. Now if they extended the line towards the north-west, that would at least make it workable, though I can’t imagine how to deal with the bottleneck at Kensington.

Thanks for the Aussie links, Daniel. As I suspected, declining car use among young people is mostly related to kids staying at home longer and relying on others (mostly parents) ferrying them around.

Whether parents routinely ferry their kids around is a good question – it’d be interesting to see some research on this specific point. In my household, I generally don’t do this. I’ll make exceptions if I’m going to the same destination (and PT isn’t a good option) or if it’s a short distance and the weather is nasty, or they’re carrying lots of stuff (in my house this tends to be camera equipment). But most of the time, my boys can get themselves around. I’d prefer they had this independence, and I suspect so do they.

It’s interesting to note that TAC figures show the percentage of young drivers killed in road accidents has dropped markedly. I wonder if it’s related. http://www.tac.vic.gov.au/road-safety/learning-to-drive/young-driver-statistics

Daniel, I see where you’re coming from. Although you may not be able to generalise your immediate experience (you live close to great public transport) across the whole of greater Melbourne. These days mum and dad living in Cranbourne have a car each as the station is 6.5km away. You also have boys and lots of mums don’t want their 18 year old daughter walking to the bus stop in the dark. They get driven!
The other “lifestyle” factor is that kids prefer to spend their money on consumption NOW (eg electronic gadgets, overseas holiday) rather than save for a useful asset (car, home loan deposit). What’s saving?.
The fact that getting your licence is so onerous now puts kids off – “I’ll wait until I’m 21”. Another lifestyle choice.

@Roger, yep, agree with all that, however I’d just note:

* the indications are the trend is not limited to young people living at home, but also those who have moved out of home… and are preferring to live in inner-city locations. (Obviously it’s a long way from universal of course.)

* “useful asset” is a really subjective thing, which is something many of us who are older are still coming to terms with. If someone prefers to spend their time online instead of driving, then a whiz-bang phone is a more “useful asset” for them.

Thanks Daniel for the update. I agree that there is a movement away from car ownership in general for all ages, I don’t think youth bashing is constructive here especially when avoiding car ownership is useful for society. I am sure many empty nesters who live in the inner city rely less on the car as they have amenities close by (including PT), I would not call them irresponsible or lazy, just using common sense.

The growth of ride sharing, car rentals, better PT services (could be better but definitely an improvement from 20 years ago) has reduced the need to own a car. I would say it would be foolish to purchase a car in the inner city because now it is cheaper and more convenient to use PT, walk, ride and use ride sharing/rental services.
A car may be a necessary (not useful) asset in the middle and outer suburbs because of poor
town planning and terrible PT, however our main goal should be to reduce car dependency and make housing more affordable, not expect younger people to spend 90% of their income on mortgage and car repayments.

Could be handy, to have it timed in with say a grade separation of say Cheltenham and Highet areas, as the line would need to be closed at the same time for them anyway.

Perhaps, we could have a similar setup like that at Sandown park. Let train users park at the racecourse carpark during non-race days.

Could we have a network of buses connect with trains there too?

And, I can not accept the negative impact on existing services, other than a possible shortage of rolling stock.

You would help free up capacity on Craigiburn trains, as they could then run express at least through Kensington, and perhaps Newmarket too?

At first, I felt keeping the trains would be far better than using buses. Buses are only going to clog up the roads of which would be needed by emergency vehicles and locals fleeing by road too.

But then, the trains are electric, and power could be cut due to the fire, all while a train is between stations, and that would pose a serious threat to the train and all on board it.

Also, there is only one way out of Belgrave via rail, Bus has many ways out, and would not be trapped if a fire was to head towards Belgrave from Upper Ferntree gully way.

That is a great step forward. I just wish the three orbitals are going to run hourly then too.

They said on 3aw this morning that, Berlin is the only other city in the world, which has all weekend transport across three different modes, like what we are about to do.

I would not have supported rail all the way on all lines. Definately to Caulfield and Box Hill, then connect with buses there. Perhaps to Dandenong and Ringwood, but I do fear security will be too much of an issue for trains beyond those locations.

What are the frequencies for the tram network?
Could we operate the night network as all low floor? Even if, you need to have Southbank supply all the low floor trams on many of the routes for the overnight timeslot only. Especially on #75.

I know quite a few people who have lived in the inner city most of their lives and so never got a driver’s licence. I still have mine due to growing up in the country where I needed it, but did not get it until quite late. I have not driven in 10 years at least. I have about one time per year where I need to go somewhere out of Melbourne with only the bus to get there, is arranged well in advance. Even my parents have ditched the car for day trips to Melbourne or going down to the airport and get the train. Saves having to get someone up really early to do an airport pickup also.