This is an update of a 2010 post where I quickly compared the different types of trains then in service.

Since then the Hitachi trains have been taken out of service, and I also thought I’d briefly describe where the names come from.

(The Hitachi trains got their name because the design was by Hitachi, though they were all built in Australia by Martin & King and Commonwealth Engineering.)

X’Trapolis trains run most services on the lines to the north-east (via Clifton Hill) and east (via Burnley) of Melbourne. In part because their numbers have increased markedly over the years, they are expected to be introduced to the “Cross city” (Frankston, Williamstown, Werribee) lines later this year. There are 87 trains of 6 cars each = 522 carriages.

This model of train, whose full name is the X’trapolis 100, is made by Alstom, whose nameplate you’ll find on the floor in the doorway; while they are largely imported, they get fitted-out at Alstom’s factory in Ballarat.

They’ve been criticised in the past for poor suspension, leading to a lack of comfort (particularly for drivers) and because they are not stainless steel (and thus may be prone to rust in the future). But they arguably have the most efficient current seat layout, and are the only model of train with sufficient handholds for standees. They also have very clear information displays, though in the newer models these are poorly located. 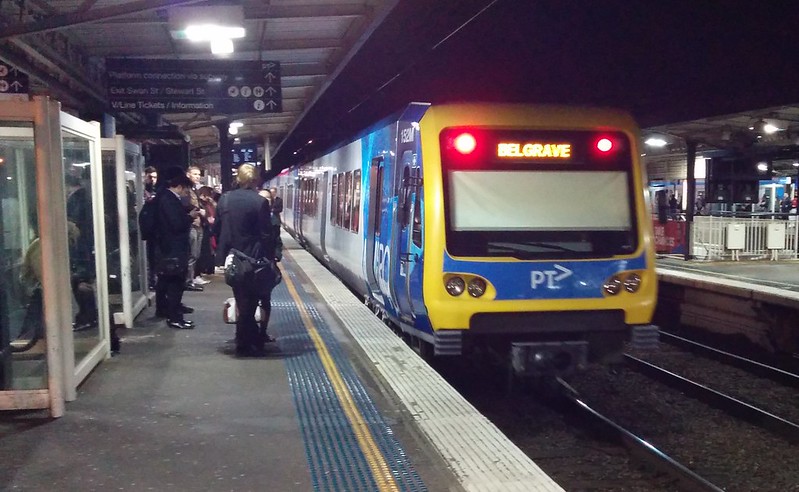 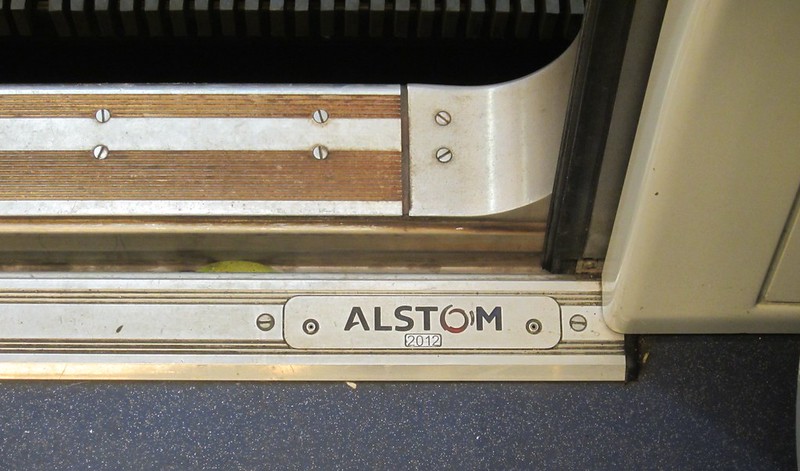 Siemens trains serve the western (via North Melbourne) and south/south-eastern (via South Yarra lines). For many years they had brake problems, so when the government ordered extra trains to grow the fleet, they were avoided. There are 36 trains x 6 cars = 216 carriages.

They’re made by Siemens (obviously), a company that pretty much invented electric trains, but the actual model was originally known as the “Mo.Mo”, short for “Modular Metro” — because the modular design allowed carriages to be built in a number of different ways, and they’re used in a number of other cities around the world.

Melbourne’s version of the Mo.Mo has been criticised for its lack of doors, and lack of handholds along the carriages, as well as the brake problems. Additionally the seat cover design originally chosen by then-operator M>Train is notorious for attracting/showing dirt and grime, and (presumably due to a lack of cleaning) these trains often have a large amount of interior graffiti visible. On the bright side the new seats are much better, they have pretty good ride quality and a walk-through design (without intermediate doors as on the X’Trapolis). 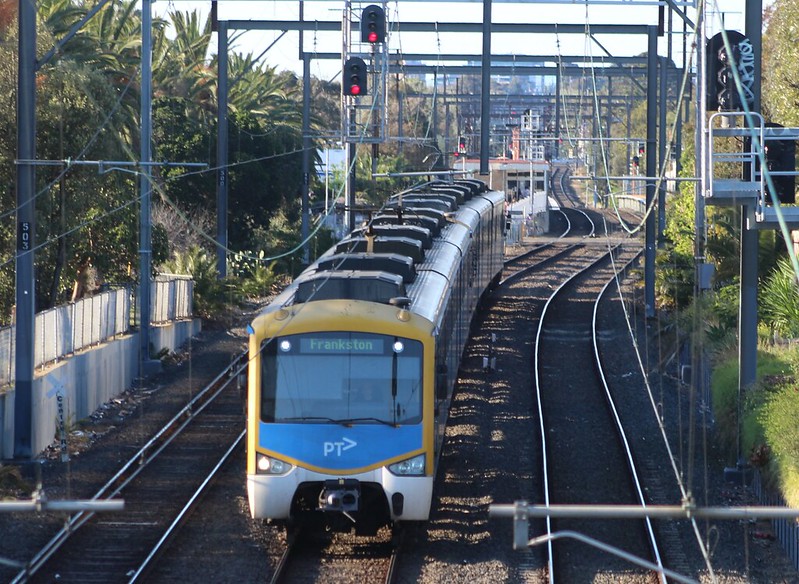 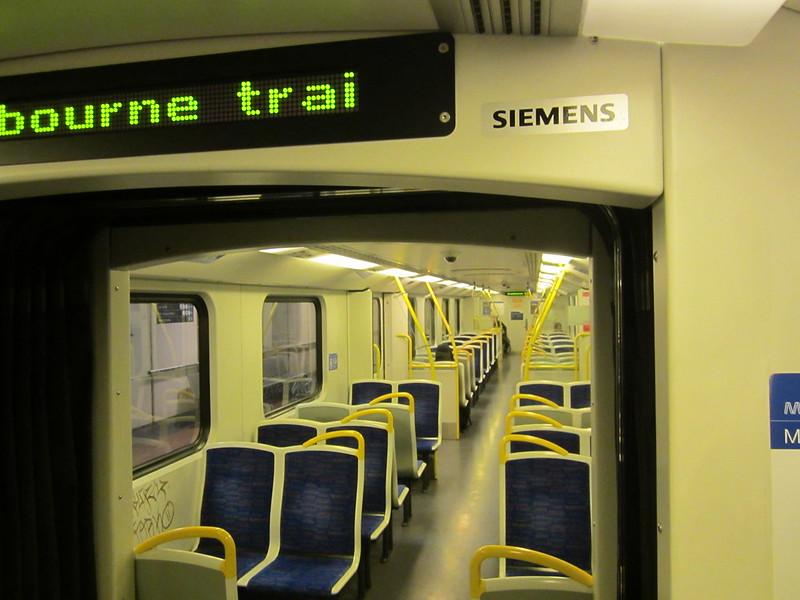 The Comeng train, used throughout the network. There are 92 of these trains = 552 carriages. Comeng is short for Commonwealth Engineering, the once government owned enterprise which built the trains during the 1980s. The Dandenong factory where they were made is now run by Bombardier, who make Melbourne’s E-class trams, and V/Line’s V/Locity trains (and similar trains for other Australian cities).

During the first privatisation of the rail network from 1999 to 2004, the Comeng fleet was split up and refurbished to different, incompatible standards, known as EDI and Alstom for the companies that did the work.

These differences are still visible today, with the most obvious difference being the Connex/Alstom carriages got a smoother more rounded front, a much smaller front LED destination display, and green handles/poles/seat backs inside — whereas the M>Train/EDI carriages have yellow handles inside. They also have different plates above the end doors (see below), as Alstom put new ones in.

After the rail system was brought back together in 2004, work was done to make the fleet compatible again. In the past they tended to have problems with their air-conditioning failing in the heat (!) but this was resolved via upgrades after well-publicised failures in the summer of 2008-09. 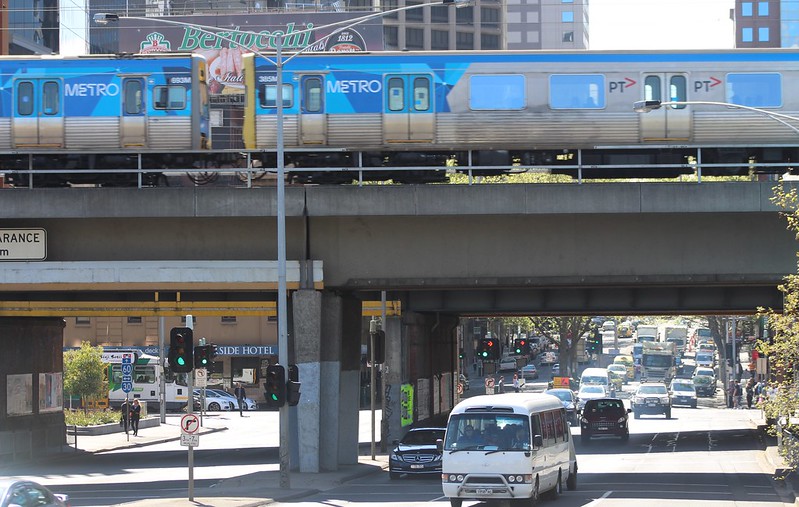 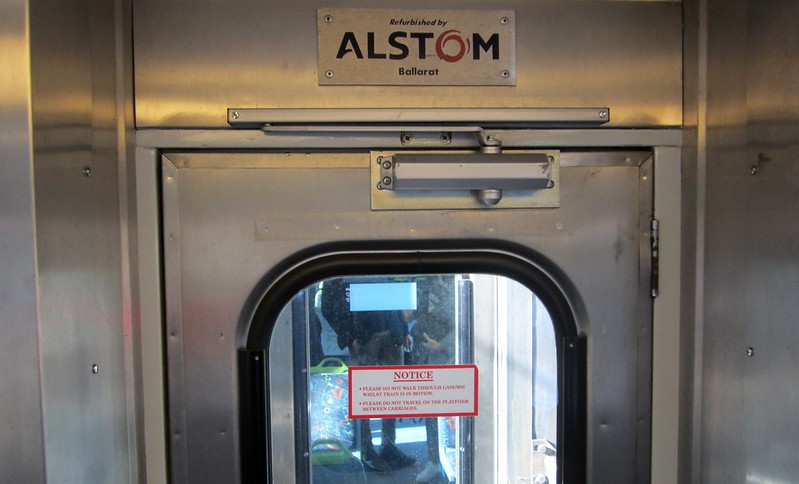 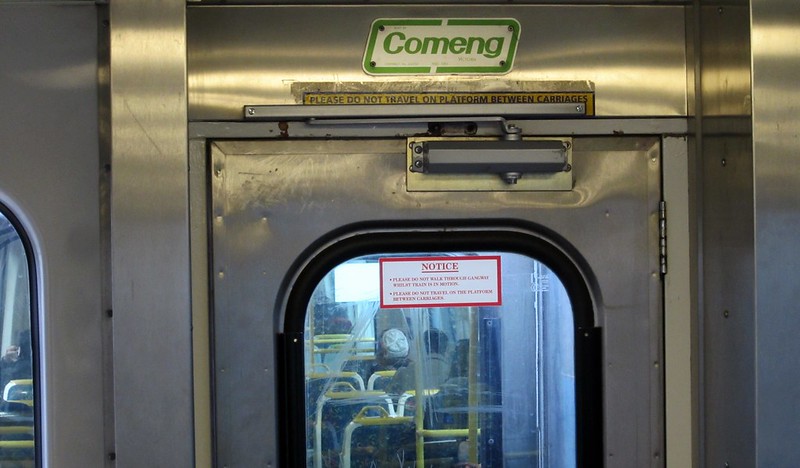 Some trains only run on some lines

Some trains only run on some lines because it involves a bunch of work to test and certify trains to run on all lines — sometimes this requires modifications to tracks, signals, platforms or even trains.

In the future, Metro intends to sectorise the rail network, dedicating parts of the fleet as well as maintenance facilities to particular lines, to avoid having to move trains from one line to the other — much like the tram network runs today.

As of the 2013 operations plan, the thinking was as follows:

Since then, more X’Trapolis trains have been ordered, which may cover the Burnley group, but the (arguably blatantly political) plan to move some of them onto the Cross-City lines has also been initiated, so who knows how it’ll look in the future. Presumably though the plan is still to have mostly the same types of trains on specific lines, to minimise crossover and so timetabling can take into account particular speed/acceleration/deceleration characteristics of the train types used.

Daniel, thanks for the comprehensive report. I guess it’s a bit like airlines having a fleet of different types of aircraft made by different companies (Boeing, Airbus, Bombardier, etc). In the case of the railways, there is more government involvement (ensuring local content, subsidising cost of new infrastructure) and accountability.

What about those old metal monstrosities, that pop up from time to time when the weather goes over 35 degrees? The rust buckets with no A/C…

@Roger, the difference is that the government owns the fleet. The train company just runs and maintains it.

@AJ, I think you mean the Hitachis. As mentioned at the top of the post, they are no longer in service.

It’s actually pretty easy to tell the Siemens trains from the other two types. They’re the ones that are filthy inside and have the air conditioning set so cold you need a woollen jumper on a 35° day.

That’s why it wasn’t just a stunt to run one Xtrapolis along the Frankston line, because it was a demonstration that even if not all the trainsets were certified for the line, the line was certified for the trainsets. So there can be no technical excuse in the future for all the Siemens trains to be dumped down here, the way certain lines got stuck with the last of the red rattlers (which would have been a fire hazard in the Loop).

The real question is why the government found it easier to make the modifications to the line and train than to ensure the Siemens were properly cleaned and the cabin temperature set to something sensible.

As I’ve mentioned before the Siemens trains are filthy inside but they do have the best air conditioning on a hot day and the smoothest, quietest ride. I think the seats are more comfortable than those on the other trains with better back support due to the higher and better shaped seat backs. Some of them do have new seat fabric installed but they desperately need to reupholster the rest of the carriages. I ride them often as I live close to the Sandringham line. Some of the Comeng trains have a high pitched whine from electrical equipment under the train and annoying flickering lights.

The train driven actually started commenting about the Seimens trains being the best ones last week. Also he thanked people for giving up their seat/not talking too loudly on their mobile phones/not playing headphones at 11 UNF! UNF! UNF! (yes he did the sound effect)

My local station is Collingwood (which should be called Abbotsford, but that’s another debate entirely), we I only get X’Traps.. I like the X’traps, but my biggest gripe with them is the seating layout in that you’re forced to be crammed in and sit opposite a stranger with your legs almost in their crutch. Why can’t they have the V/Locity layout with all seats on one side facing the same direction, or better yet, the “Sydney-style” rotational seating. Sure, have one or two opposite facing seats for groups, but for the majority of people this is such a pain! It also ‘feels’ like you get far more leg room with the back of the seat directly in front of you (if that makes sense). Why are they so obsessed in Melbourne with the opposite facing seats?! Doing away with opposite facing seats also means people can’t be fined for putting their feet up.
One thing I’ve noticed in the last couple of months is a dramatic improvement in the cleanliness of the trains on my line. Not sure if that’s because there’s a whole bunch of new trains they’ve put on the Clifton Hill group, or just more cleaning?
Question, how are these trains going to go on the Werribee line with large sections of this line at 110kph running and the X’traps limited to 90kph?

Gee, we nearly have as many Xtraps as Comeng.

I wonder if we may get an order for 8 more Xtraps and have equal amounts of the two.

There was 95x 6 car Comeng sets built. I would not be surprised that we may only have 92 left today due to fires and accidents over the last 30 years.

It has always given me the irits, how they stopped the order so short of an even 100 sets.

@Shaun – only a handful of new X’Trapolis trains have been delivered – I believe one a month or so. The existing fleet are looking fresher because PTV launched a special program in August 2015 to give the rest of the trains a deep clean:

I have to disagree about the facing seats.
Being 198cm tall I simply don’t fit in the single facing seats. This serverely limits my opportunity to get a seat on these trains.
I thought the Hitachis had hte best seating layout for peak hour – lots of standing room and handholds!

On the topic of speed of each of these trains, I was wondering if anyone knew of a map showing which segments of track in the network have which maximum speeds? I would think station spacing and track conditions would be significant determinants of speed too.