I was looking on the State Library’s web site for material related to my local suburb, and found these old real estate ads.

This one is from back when Bentleigh was called East Brighton. It’s dated 1885. It’s the area immediately to the east of the railway station, which opened in 1881, and was renamed to Bentleigh in 1907, the year after the local post office was renamed. 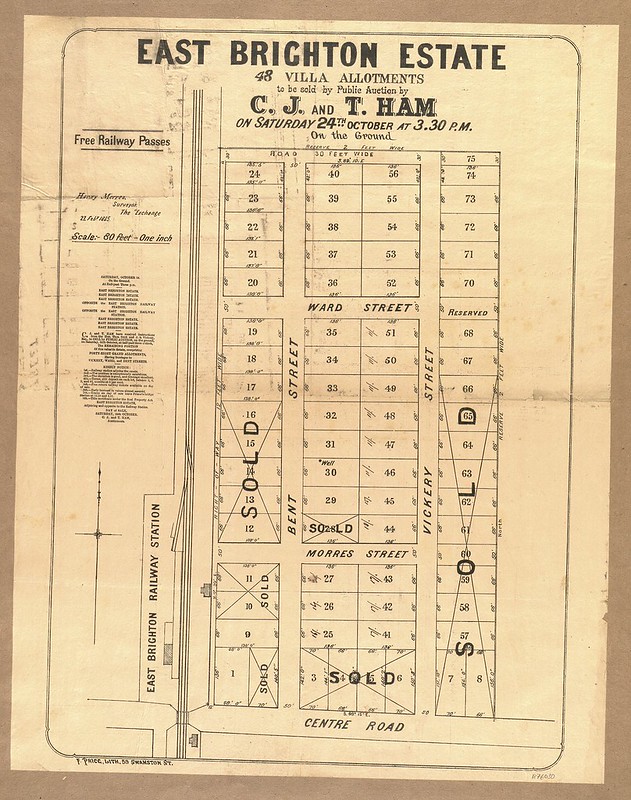 Note that Bent Street had that name well before the area was named Bentleigh.

130 years later, this area immediately around the station is subject to a lot of real estate ads again, as many of the houses are being replaced by apartment developments. Being close to the station is obviously still an advantage. 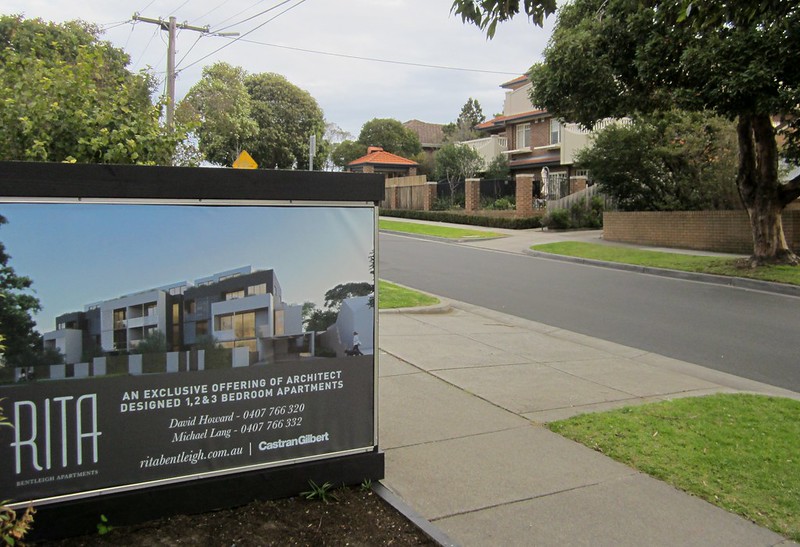 On the other side of the railway line, closer to what is now Nepean Highway, was the Zion Hill estate. This ad is also from 1885. Note it implies it is much closer to Brighton than it really is — it’s actually far closer to East Brighton/Bentleigh. Some real estate agents were obviously in the habit even back then of exaggerating. (At some stage Ebenezer Street was renamed to Milton Street.) 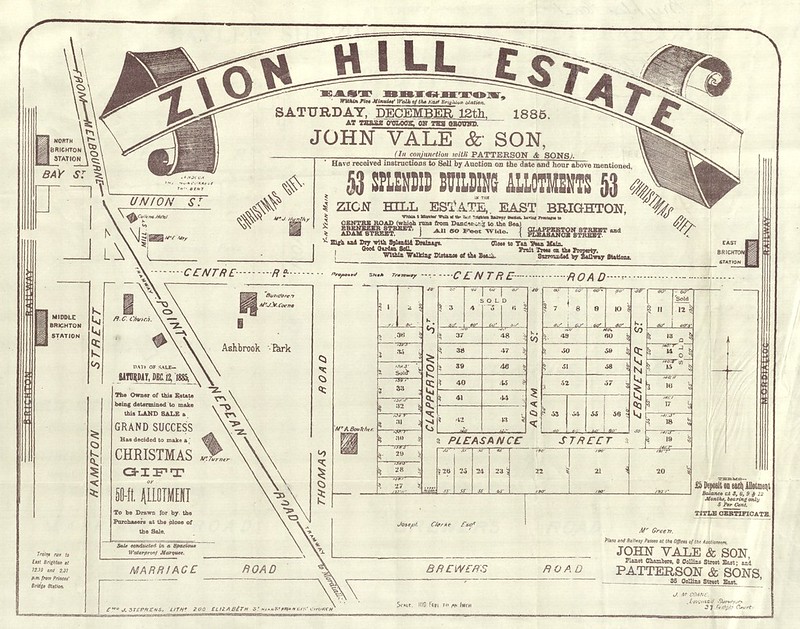 Further south east from the station was the Marriott Estate. The date is unclear, but it’s assumed to be 1920s. 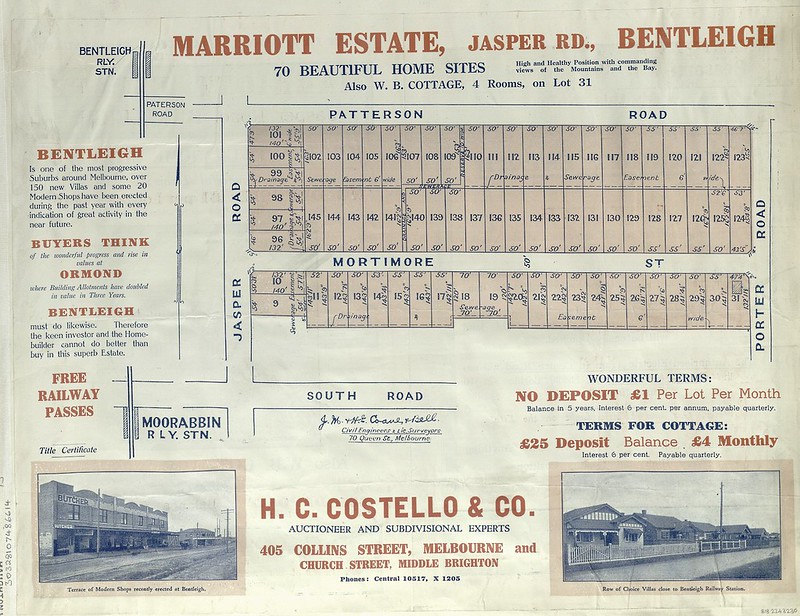 Note again the location of the estate. If you didn’t spot the small gap in the road markings, you’d assume it was a quick walk from both Bentleigh and Moorabbin railway stations (Patterson station didn’t open until 1961), but actually it’d be at least a fifteen minute walk.

Zoom up on the photo at the bottom-left and we can see a group of “recently erected” shops at Bentleigh. This is looking west towards the railway line, from roughly where Target is now. A support for the railway overhead electric wire is visible in the background, meaning this would be 1920s or later — electrification occurred in 1922. 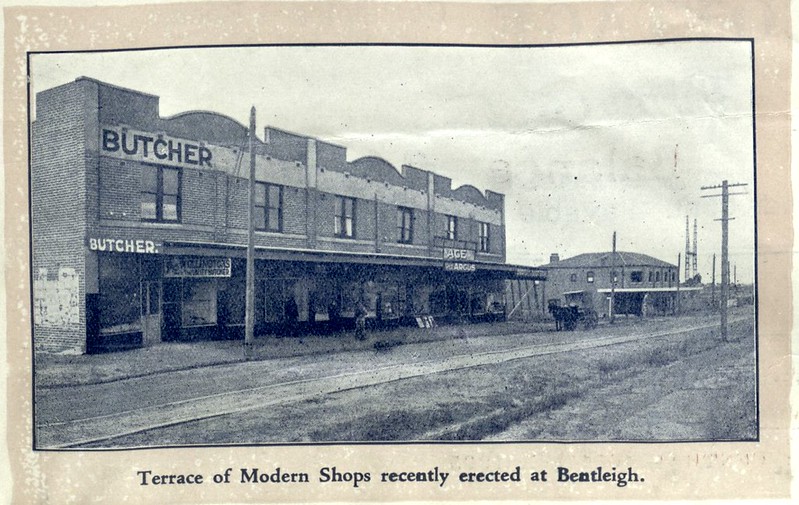 The track in the foreground was used to guide heavily laden carts full of produce going to market, and manure on the way back, one of a number of such “tram” tracks built in the area. 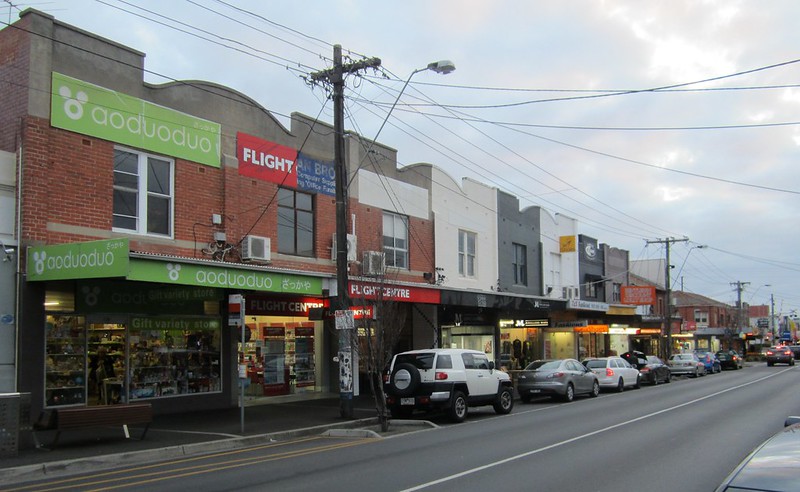 There’s some interesting stuff in the State Library collection, much of it online — well worth a look if you’re researching local history.

Quite interesting. Noted that Thomas Street was once Thomas Road. The local Marriots were relations of my family, market gardeners, but I didn’t know an estate had their name. They were also developers? I will ask my mother.

@Andrew, isn’t it more likely that they sold the land to developers, who named the estate after them? It fits into the long-held tradition of estates/suburbs being named after the thing they demolished/replaced!

This ad for an estate in Mckinnon confirms it was once Thomas Road.

Subdivisions in 1885 were at the start of the land boom in Melbourne. Few houses would have been erected on these estates at the time. If you look at the Bentleigh housing stock today, the old stuff is mostly from the twenties (you’ll find a very few houses dating back to the 1880s). So the speculative subdivisions on the edge of Melbourne largely didn’t pay off at the time. Despite this, the street plan (and even the street names) are still recognisable today.

It was important on the Mount Zion estate to show North and Middle Brighton – these would have been the nearest shopping centres. Even after WWI, Bentleigh village (Post Office, Forge, Churches, School) was around Centre Road and Tucker Road. There were probably only a few shops near the railway station. This didn’t change until the massive development in the ’20s.

Did you see Cullens Hotel near the corner of Point Nepean Rd/Union St?

Hello, I have 2-3 other Bentleigh estates Land Sales papers, from those early days. Cheers, Helen