Warning! No transport content! If you only want to see transport blog posts, you can use this URL, or sign up to the email alerts!

My first recollection of the ABC Shop in Melbourne was a small space in their then Lonsdale Street radio HQ, which was where the County Court is now — on the corner of Queen Street.

I think it’s where I got the 1983 Doctor Who 20th Anniversary Special book (a local reprint of a UK Radio Times publication), as well as the Doctor Who Technical Manual (in hardback no less) – both still in our family.

Later on they were in the Galleria (in bottom of the gigantic State Bank, later Commonwealth Bank building at Elizabeth/Bourke Streets), and at times I bought Monty Python VHS tapes, DAAS Book (which I got autographed at the shop by the Doug Anthonys… since sold on eBay) and lots more Doctor Who merchandise, of course. This includes a bunch of laminated posters of paintings from renowned franchise artist Andrew Skilleter, one that also marked the 20th anniversary story (The Five Doctors) — which eldest son Isaac has since had autographed by Fifth Doctor Peter Davison — at an ABC Shop, of course. 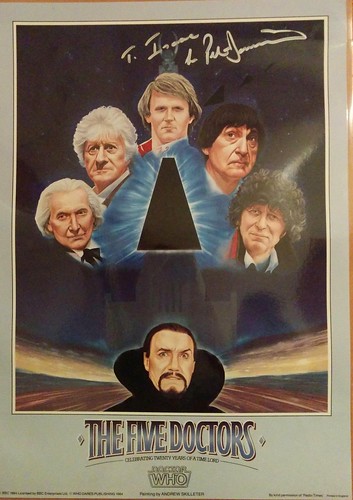 Since then the Melbourne CBD shop has moved to the GPO, then more recently to Emporium. And meanwhile they’ve popped up in most big shopping centres.

We still love browsing, and occasionally buying there. The selection of DVDs is more focussed than somewhere like JB Hifi, and the range of other merchandise is good. (Have you seen the amount of Doctor Who stuff that’s available nowadays?!)

Admittedly I browse more than I buy, but purchasable gems still abound… in March I found this excellent documentary:

I found this fascinating when I watched it via, err nefarious means. DVD available at ABC Shop. Lessons for Melb. pic.twitter.com/e0sbmrq5Z6

So it’s sad to hear all ABC Shops will be closing in the next year or two.

Online will continue, but it won’t be the same.

PS. Trivia: before the recent crop of Doctor Who pop-up shops, there used to be a BBC Shop. Okay, it wasn’t a standalone shop, but a dedicated section of Thomas’s Music on the ground floor of the Southern Cross hotel building.

7 replies on “The ABC Shops to close”

A sign of the times. I use to buy gifts there but not for a long time.

Someone commented under The Age article saying “they should have 1 ABC Shop in each capital city for those that are not savvy with online shopping”.

Not a bad idea. Instead of having multiple ABC shops across MEL and SYD. Just have 1 in MEL and 1 in SYD.

I found a copy of the Technical Manual in a second hand bookshop for $2 a couple of years ago. Quite an interesting read for the beginning Doctor Who fan I was.

A shame that the ABC stores are closing though. In the past few years I have spent quite a bit more time browsing there, rather than buying there. With Netflix and even repeats going up on iView, I don’t have the same desire to own everything in a physical form like I used to.

I love the ABC shop in QVB in Sydney. Most recently got that Underground DVD you mentioned Daniel there. And lots of Doctor Who.

Very sad. No reason to go to QVB on future Sydney visits now, except for the Vienna Coffee House.

Disappointed to find on my June Sydney visit that the rail-tram bookshop at Central Station was closed.

I lived in Melbourne from 2009 to 2012, the ABC Shop was in some huge commercial bookshop down an escalator in Collins St, If there was another one I never found it.

@David, the commercial bookshop you’re thinking of is probably Dymocks – they have an “ABC Centre” there. I think at that time the ABC Shop was in the GPO building – it was there until June 2013, then opened in Emporium when that opened in April 2014.

Thanks Daniel. Oddly I never went into the old GPO building in all my three years 2009-12 in Melbourne. But my wife and I often visited Sydney, maybe 10 times a year from Melbourne (and we still often do from Wellington), so I always called in to the ABC Shop in QVB. Doubtless because I knew it was there.

Readings in their various outlets were great for books and DVDs in Melbourne, I spent a lot of time in the Port Melbourne one and they would always quickly locate obscure titles I wanted.

Only get to Melbourne once a year now, but had a great time at the old Duke on our last visit there last November with the TDU crowd.

I agree with the idea of just one shop in each Capital for those who are not net savy.

It is sad to see them close, but, it would be far better to have an ABC DVD stand in stores like JB HiFi where they are sure to have a greater turnover of products than what an ABC store would.

Like all things that are new, everyone is turning to the internet. Like most other things, you will have a large number of those who stick with it. You will also have a lot of others who do not like the new way, or the novelty wears off, and you will get them wanting to go back to the bricks and mortor shops.

What is old becomes new again. If retailers can hold on for another few more years, they will find there shall be a good increase as the mass internet-novelty shoppers have the novelty wear off.

How many people I know are getting struck by some of the best scams on the internet, giving people a very bad taste for buying online generally.