Science fiction and fantasy conventions used to be a homespun affair, run by the local clubs, featuring broadcasts of rare episodes and out-takes (before it all got released on DVD) and fan films. If there were guest artists, often they would appear only if they happened to be in the country at the time, and fees for photos and autographs were unheard of.

These days it’s big business. Not that it’s a bad thing. I like that geek culture is no longer a hidden-away, niche enterprise, and those who are interested in it have big events like Oz Comic-Con and Armageddon, and SupaNova, and others to go to every year.

And yet for all the big budget exhibition halls and merchandise stalls and paid guest appearances, it’s still the fans and their costumes that make it what it is. 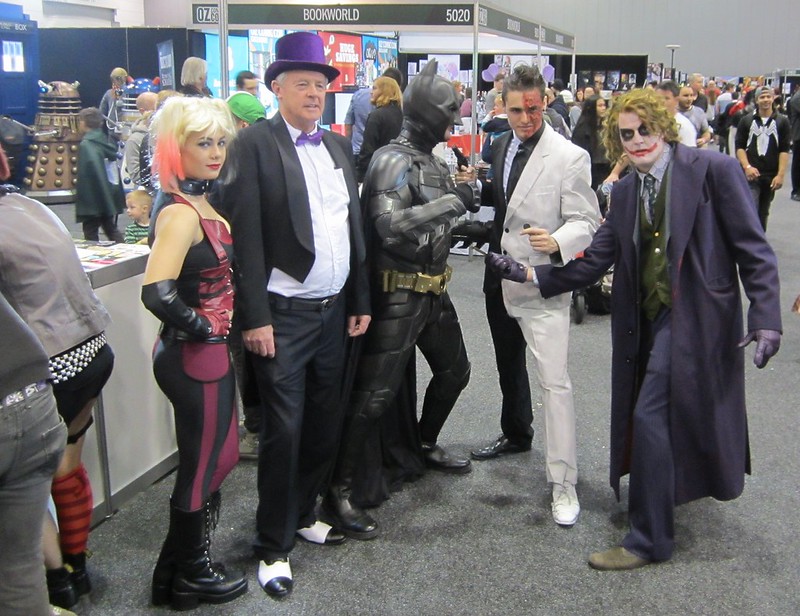 On the train into OzComiCon on Sunday morning, we were keeping a lookout for others attending — of course it’s sometimes a guess as to whether someone’s in costume, or just dresses eccentrically. I’d had a plan for a costume but wasn’t organised enough to get it all prepared, so went in civvies, but it was just as well as at lunchtime I had to duck out to talk to Channel 9 about the airport rail link.

This year it was at MCEC (along with SpecTex15 — a trade show about specialist textiles… their attendees were a little less outlandishly dressed).

Given the number of Doctor Who fans out and about, it was a shame that there were no related guests or sessions, but I went to an interesting Star Trek: Deep Space 9 session with Terry Farrell (Dax) and Rene Auberjonois (shapeshifter Odo).

Mostly it was light-hearted, but at one point they noted Friday’s marriage equality decision of the US Supreme Court, and Farrell said she was proud of the episode where she kissed another female actress — although the genders of both characters was unclear, she said that it had provided a chance to indirectly have the show stand up for people who then might have been unable to be public about their own relationships.

I’m struggling to paraphrase it well; she expressed it in a much more graceful and passionate way, and got a round of applause from the audience. In any case, it fits in well with the generally progressive vision of future society that has long been the hallmark of the Star Trek franchise — everything from the once-controversial multi-racial cast to the absence of money.

Anyway, here are some photos from OzComicon… as you can see, it was pretty busy, and people in costume were only too pleased to pose for photos.

Who you gonna call? 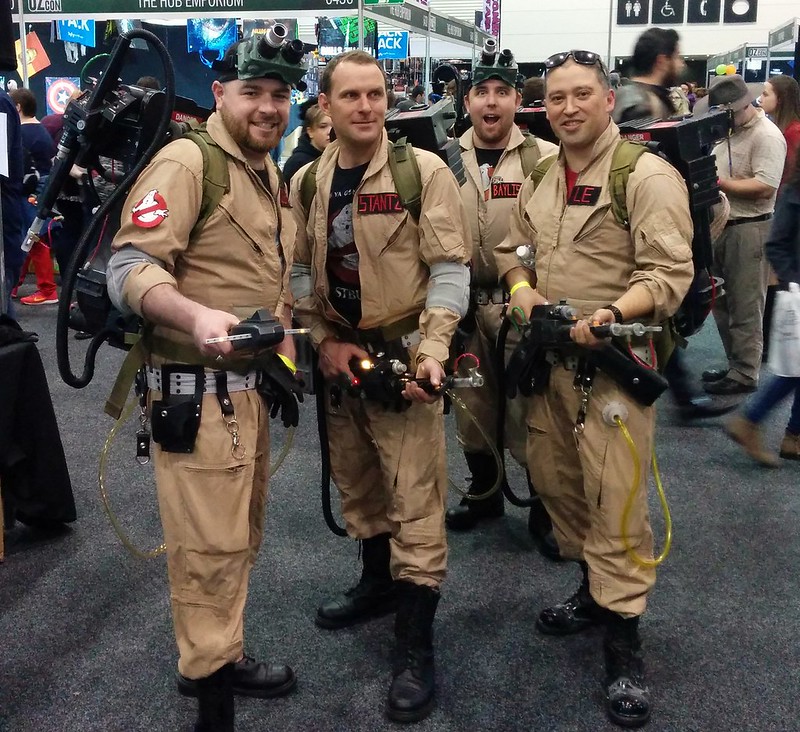 Whatever you do, don’t cross the franchises! 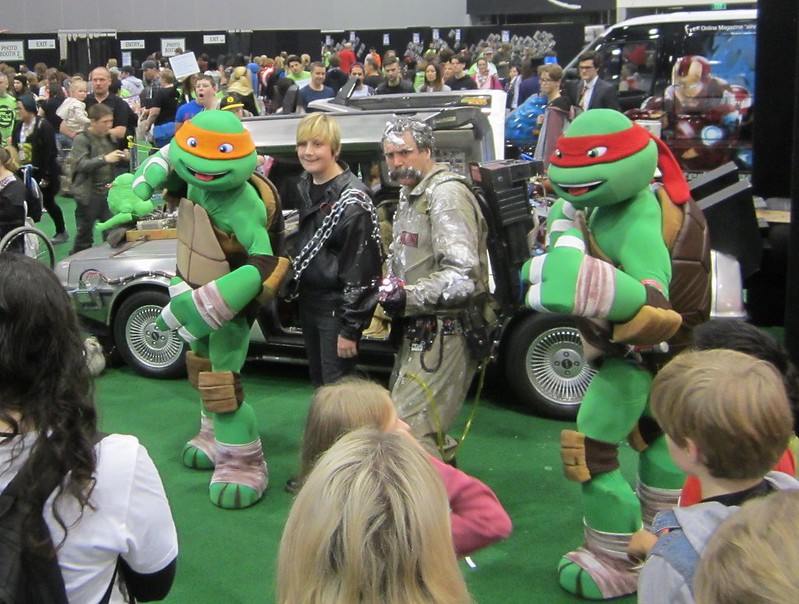 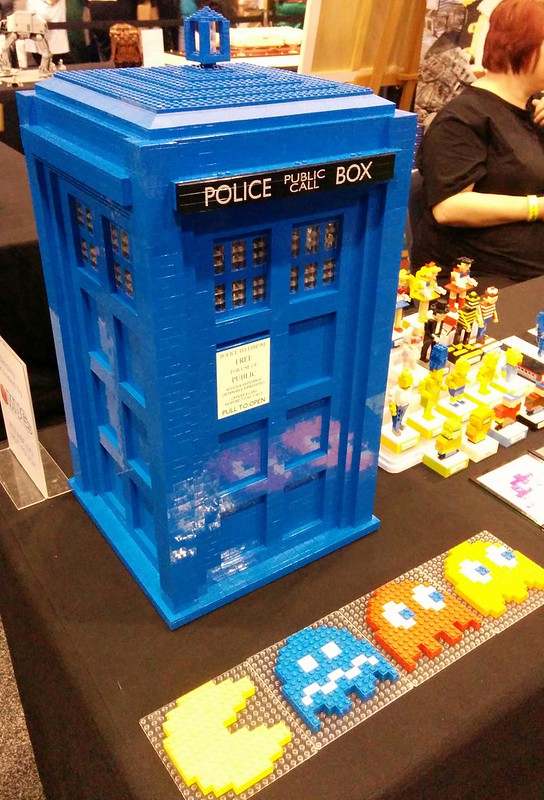 Captain Picard from Star Trek: Next Generation snaps a photo of a Star Wars Storm trooper. 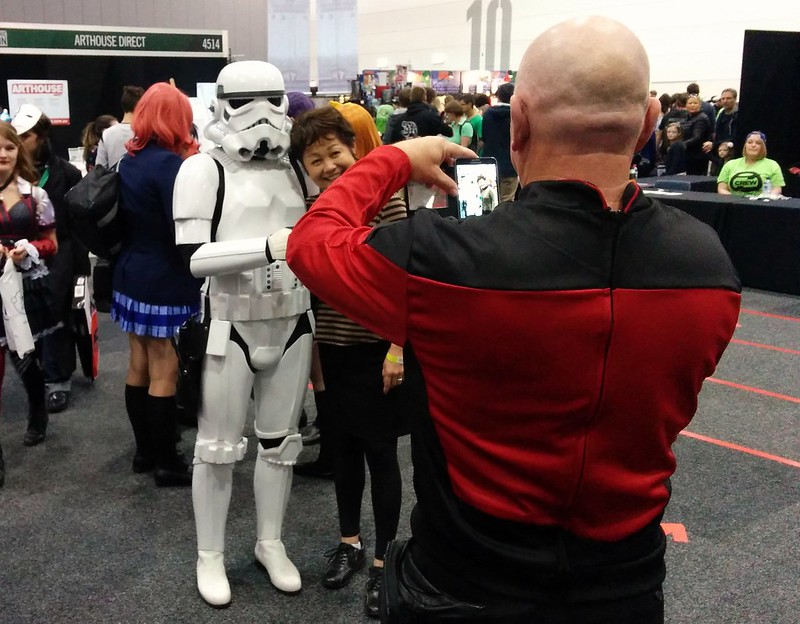 Lots of cosplayers pose for a photo outside… you can see the picture in this News.com.au story: Costume-clad fans flock to Oz Comic-Con Melbourne 2015 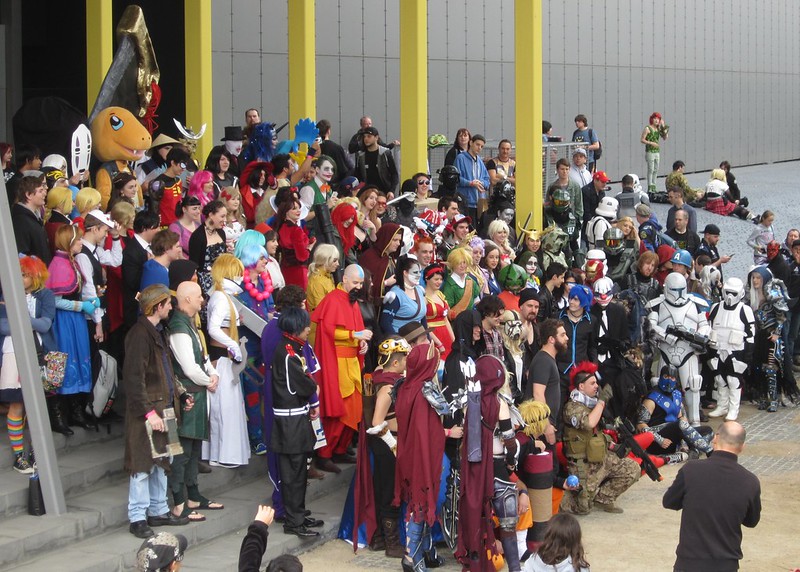 (View this photo at full size)

Speaking of marriage equality, I’m somewhat surprised to see this that this tweet netted over 300 retweets and a similar number of favourites in 24 hours, and got quoted on Buzzfeed. Cool!

Conservative Americans considering moving to Australia might like to be aware of our extensive gun control and universal healthcare. #SCOTUS

Nice photos – though I prefer the smaller fan-run conventions such as Continuum, Conflux or Swancon.

I’m disappointed, Daniel, that you use the incorrect propaganda term “marriage equality”. We already have marriage equality. As another commentator wrote the other day, there are four requirements of marriage: (a) only two people, (b) one from each gender, (c) of proper age, and (d) not a close blood relative. As he said, “Meet those four basic criteria, and anyone can marry. Thus everyone is now fully equal in terms of what marriage is. And also, those who fail to meet those criteria are equally discriminated against. I cannot marry, for the simple reason that I am already married. My dog cannot marry. A seven-year-old cannot marry. Three women cannot marry.” (See http://billmuehlenberg.com/2015/06/29/30-home-truths-on-marriage/)

In other words, the issue is not about marriage equality, but about changing the definition of marriage. Or, according to some revealing statements, about destroying marriage. (See for example http://illinoisfamily.org/homosexuality/homosexual-activist-admits-true-purpose-of-battle-is-to-destroy-marriage/)

Yet the media (and now you) are freely using the term “marriage equality” which makes it seem like this undermining of society is all so sweet and fair and unreasonable to oppose.

@John, so everyone can marry (and have all the benefits of marriage), as long as they’re not gay. Right.

As for destroying marriage, that sounds like one extremist in the gay community. Doesn’t mean it’s a majority view. (As the source article notes, there is a wide diversity of opinion.)

No, Daniel, the point is that homosexuals are /allowed/ to marry. Both homosexuals and heterosexual are restricted in /who/ they can marry, but not the fact that they /can/ marry. It is not a matter of marriage equality. If it was, then those other restrictions should be removed as well. And in fact some are already calling for it. Some are arguing (quite logically) that if two people of the same sex can marry, why not three people? Or two close relatives? The argument is about redefining what marriage is, not about equality.

And no, that wasn’t just one extremist. That “extremist” was not someone being reported on as a whacko, but was an invited guest at the Sydney Writer’s Festival, broadcast on the ABC. That “extremist” was applauded by her audience when she said this (listen to the audio). That “extremist” was not challenged on that point by any of the other panellists (who did question other things). Rather, the other panellists tended to agree that other aspects of marriage (such as monogamy) should be thrown out. So the “extremist’s” view seemed to be the consensus at that event. Also, that “extremist” reckoned that when people say that it’s not going to change marriage, they are lying. Carina Kolodny made a similar claim in the Huffington Post (http://www.huffingtonpost.com/carina-kolodny/marriage-equality-is-dest_b_4823812.html), where she is a senior editor. So I guess the Huffington Post employs extremists as senior editors.

And finally, that “extremist” was by no means alone. See http://www.tfpstudentaction.org/politically-incorrect/homosexuality/marriage-equality-spells-death-of-marriage.html which has further quotes from other such “extremists”.

I’m not claiming that destroying marriage is the end goal of supporter of SSM, nor every homosexual, nor even every homosexual activist. But there are an alarming and number who do say that, and also say that those who deny it are wrong.

Right. So they can marry, but not who they want to marry. That’s a great choice.