PTV announced on Thursday that online realtime departure information is now available for some bus routes: specifically, Smartbus routes, which have long had realtime information displays at major stops.

Ironically as I post this, it seems to be down… but when working, it’s a small but welcome step forward in the quest to get more realtime information available to the public — via apps or web sites, so you can check your phone or your computer to see how far away your service is. 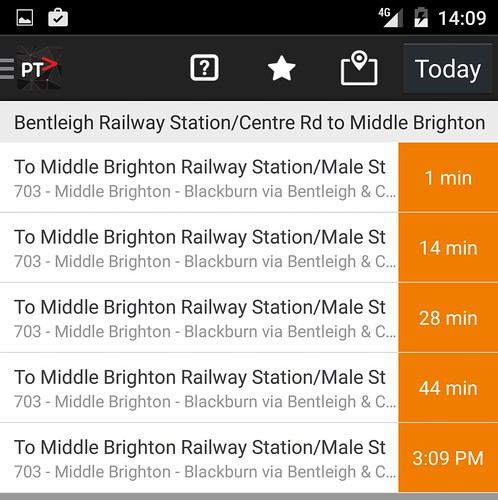 It follows the introduction of Tram Tracker way back in 2006, initially available by phone — premium SMS, at 55 cents a pop. Remember, this was before the launch of the iPhone — some phones had got basic web access in about 2001, but at the time, very few people knew how to use it.

Tram Tracker went onto the web in 2007, followed by apps for iPhone and Android (the initial one being unofficial) a couple of years later.

Tram Tracker, by the way, isn’t quite realtime. It uses the “Automatic Vehicle Monitoring” system originally introduced in the 1970s, which records the trams passing specific points along the routes, can track them to an extent between those points, and then interpolates the time at each stop based on that data. Generally it’s pretty close to accurate, but occasionally a disruption between the points can throw it out.

The new bus tracking is, it seems, linked to the GPS devices inside the Smartbuses which trigger automated announcements and displays for the next stop. From what I’ve seen so far it’s reasonably accurate. (More accurate, it seems, than the hopeless equipment that was installed with Myki which often can’t tell the difference between Melbourne’s two vast zones.)

In the PTV app, and on the web site, it appears the realtime information is distinguished by it being a minutes countdown instead of a fixed time. I think they could have done better on this — it’s not exactly crystal clear.

A myriad of information

Along with service information now provided via apps, Twitter and the web, passengers are starting to get a better picture of how services are running on any given day. There’s actually a myriad of information out there.

(Any corrections? Leave a comment below. I haven’t included information available by phone, eg voice. If you know the right phone number and are willing to navigate menus and wait on hold, you can get this sort of info. And on vehicles and at stations, announcements are sometimes made, though these can be sporadic.)

There’s a heap of different online/app ways to get all this information, and it’s fair to say that they’ve really got their act together in the past few years (despite some now-resolved hiccups with Metro’s Twitter feed, and their withdrawal of SMS alerts).

The PTV app and web site seems to have it all, but the individual operators offer more tailored views into the same information.

Hopefully in due course we’ll get realtime departure information available more widely. The biggest gap now is trains and non-Smartbuses — they’re working on both, but they can’t even reliably get realtime train information onto the bus stop signs just outside the stations, so I’m not holding my breath. 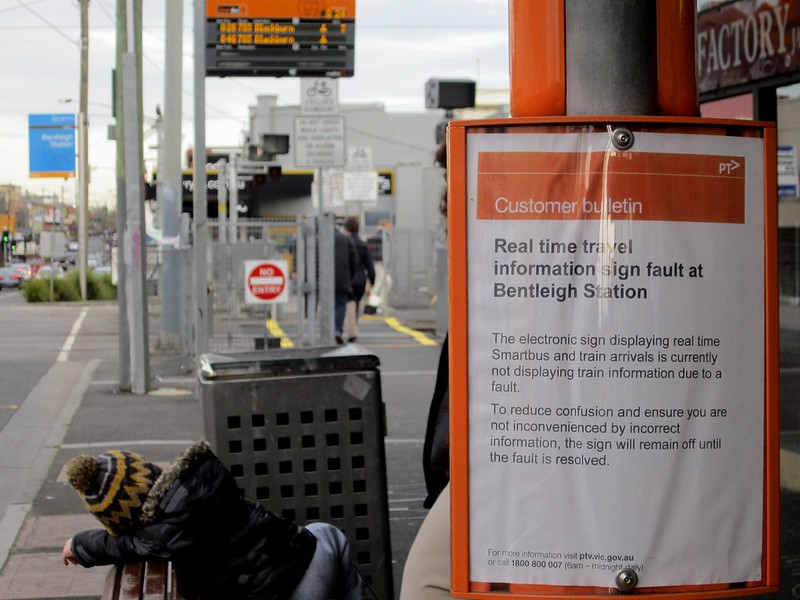 As time goes on, for frequent routes, I suspect departure countdowns and service status will become more important than timetables. It’s already the case with many tram users — they check Tram Tracker to see how many minutes away the tram is; not the timetable.

This in turn may see authorities start to operate services in such a way as to maintain a regular service, rather than trying to meet specific times: if a service is cancelled, shift the others forward or back by a few minutes to even up the headways. As this (unofficial) London bus timetable says: “This route is classed as high frequency, and as such controllers will endeavour to provide an even service rather than necessarily adhering exactly to the times shown.”

In some cities they don’t publish full timetables, just frequency guides. Timetables will remain important for the less frequent routes, of course — any gaps greater than about 10 minutes, and people are likely to want to plan around that.

As for system information, the ultimate goal would be pulling all the data together in realtime, to help advise you where to go (journey planning) and update you with any changes along the way (the train you’re on is late, so you’ll miss the bus connection; stay on one more stop and get an alternative bus route departing a few minutes later which also drops you where you want to go).

Plus of course we need a coherent reliable frequent network so you need to adapt your travel plans less often — it just works, and you can easily and quickly get from A to B every time, as easily as getting in your car.

I think you are right: commuters want to know how long it will be before their train/tram/bus arrives. Only in the past year have digital displays been installed at my local station (Brighton Beach) indicating how long I have to stand in the cold. Technology can be used for good!

Google Maps tells us both minutes and distance when I type in Port Melbourne to Richmond.

Hi Daniel, this is a great analysis.

I have a question regarding to the effect of the real-time tracking system for bus in general – will this attract more patronage? It will surely benefit current passengers, however, the effect in promoting bus service remains uncertain for me. Is there any relevant research data indicating this issue?