— The Age: New accessible tram stops not on the level for those most in need in Melbourne

Let me present a prime example. 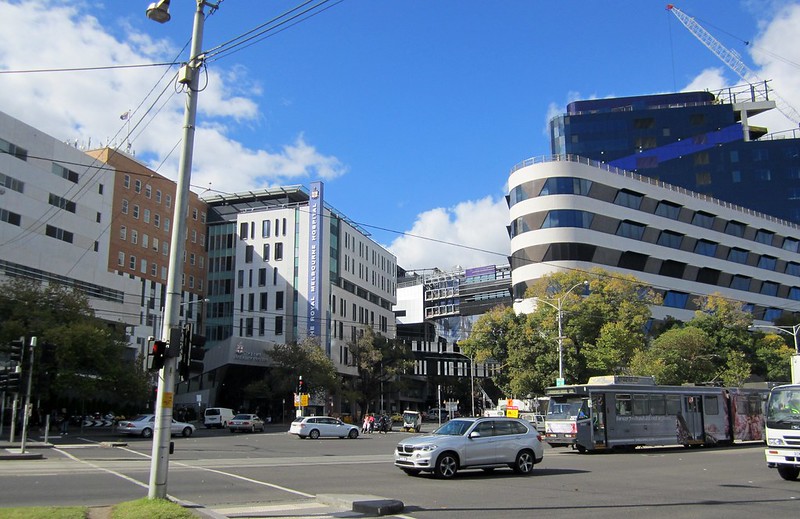 This is Melbourne’s hospital precinct in Carlton/Parkville. The Royal Melbourne Hospital, the Royal Women’s Hospital, and the Melbourne Private Hospital are all in close proximity. The Peter MacCallum Cancer Centre is currently under construction. The Royal Children’s Hospital is just up the road in Flemington Parade. Various research and specialist facilities are also nearby.

As in any busy precinct, where lots of people converge, parking is at a premium. Public transport access is important, and eventually (2026) it’s planned the metro rail tunnel will serve it.

But for now, it’s trams and buses: 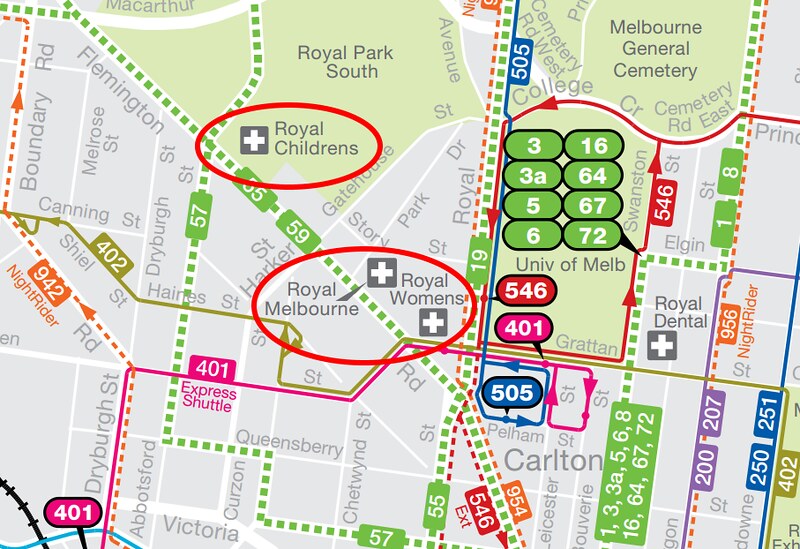 (Note: PTV appears to have placed the RMH in the wrong place.)

At present, it’s served from the west (Footscray and North Melbourne) by bus routes 401 and 402. Bus 546 from the east (Heidelberg and Clifton Hill) also goes past, though only on weekdays. All these bus services are scheduled to be served by accessible buses.

From the north and south are trams — the 19 along Royal Parade, and the 55 and 59 along Flemington Parade.

Royal Parade (route 19) is served by low-floor trams, but has no platform stops… 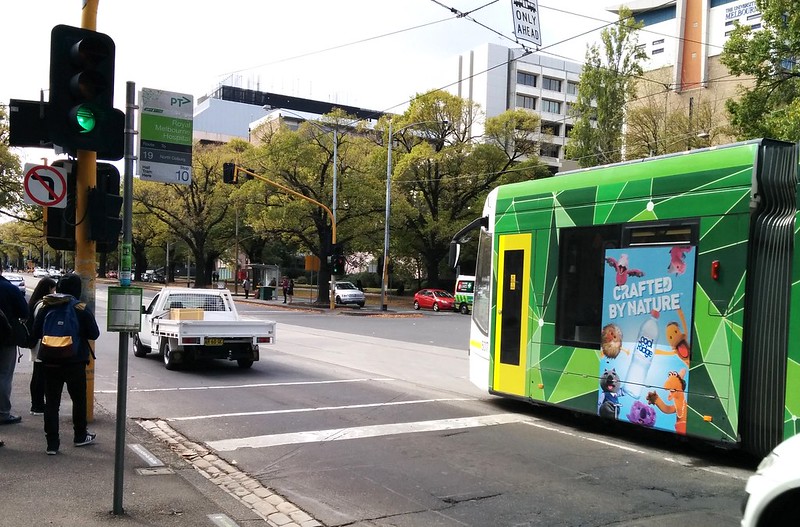 …Flemington Road (routes 55 and 59) has platform stops, but no low-floor trams. 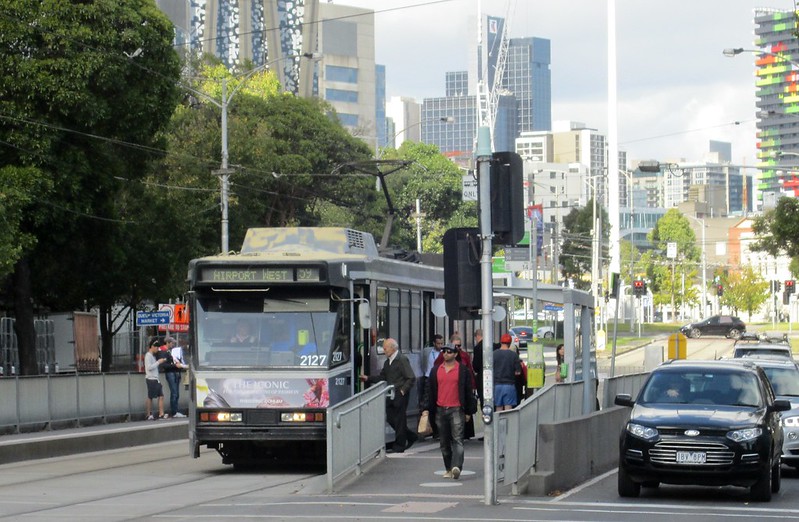 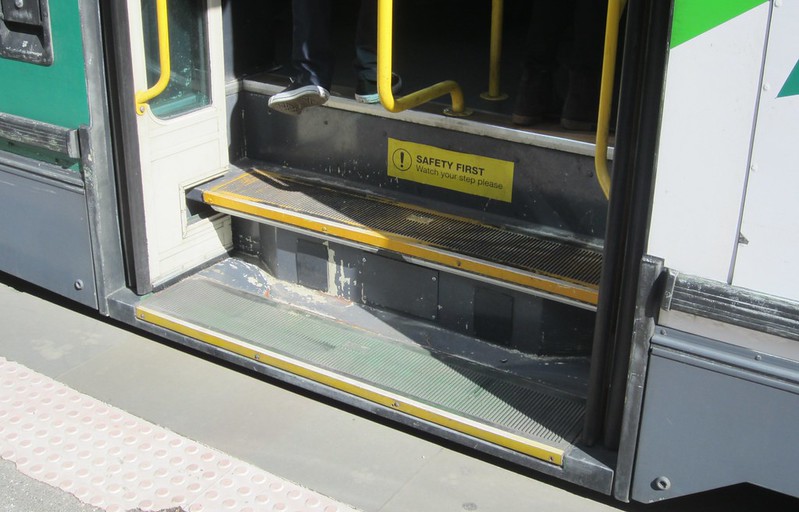 It’s almost as if they’ve been aiming at reaching targets for trams, and targets for tram stops, and not giving much consideration to where the two intersect… let alone the importance of accessible services for specific locations.

The closest place where accessible trams meet accessible stops is at Haymarket, at the northern end of Elizabeth Street. To the RMH or RWH this is about 400 metres, or a 6 minute walk for an able-bodied person (crossing numerous at traffic lights along the way). But for somebody with limited mobility, this would be a somewhat arduous task.

The rail tunnel is at least a decade away from completion, but even if it were opening tomorrow, obviously work should continue to make more of the tram and bus systems accessible.

It’s not known when low-floor trams will arrive on routes 55 and 59 — no doubt it relies on depot and power upgrades to accommodate the new trams, which are generally longer and use more power than the older trams — so a solution for the Royal Children’s Hospital may be some time away.

But it should be a no-brainer that accessible tram stops on route 19 along Royal Parade are needed — at the very least at the corner of Grattan Street to serve the other hospitals.

Update: the Yarra Trams proposal to connect routes 8 and 55 would bring low-floor trams onto Flemington Road. It’s unclear when this will happen – and bear in mind William Street (where route 55 runs) currently has no accessible tram stops in the CBD.

“It’s almost as if they’ve been aiming at reaching targets for trams, and targets for tram stops”.
Yep, I betcha the PTV execs involved here all met their performance targets and got fat bonuses. In fact, they would have designed the targets themselves, ensuring that measure of genuine outcomes (i.e. better served public) were excluded.

It’s actually even worse than that. You’ve got to be able to board at the journey origin, and both the 19 and 59 start at Elizabeth and Flinders St station, which isn’t yet a platform stop. The alternative is Melbourne Central, which has an accessible tram platform, but the lift is to the Swanston St access, not the Elizabeth St access. So you’ve got to double back just to get to the tram platform.
Probably much the same if you’re coming from the suburbs in toward the city on either the 19 or 59, instead of connecting to the train network.

The worst thing is that the car parking situation around the hospitals there is very congested – vehicles circling for spaces in large multi-level carparks because there’s such high demand, and yet there’s a) no promotion of the PT alternative inside the facilities and b) as you’ve noticed, the alternative is actually a bit hopeless to start with, for probably the reason you outline (seems like no real prioritisation of stops/trams, just “let’s get the low-hanging locations first”).

Wait till June timetable changes to 55, and you may find low floors on it then.

Daniel, if I gave you a $200m to change ONE thing about public transport in Melbourne, what would you do?

Jason, but because the 55 goes down William St, there aren’t any platform stops in the city for it.

@Paul about William St. Hopefully there is plans to put them in soon

I notice they are soon set platform some stops in Queensbridge St and Kings Way.

It is insane to brand the Royal Women’s Hospital, “the women’s”.

Jason is right. Some of the planners at Yarra Trams told me that when Routes 8 and 55 are merged mid-year, low floor trams will operate along Williams St up to the hospital precinct. The plans for William St platform stops are already done, but unfortunately not aware of any timeframe. Will probably take as long as the last few stops on Collins…

Funnily enough, when low-floor trams were first put on Route 19 a little over a year ago, PTV and Yarra Trams were spruiking how they’d provided accessible services to the hospital precinct.

To be fair to the Route 19 changes (comment 8 James A), it is much easier to get a pram up to a low-floor tram from the road than it is to get a pram up the steps of a high-floor tram even from a platform stop. I can’t imagine that it would be easy if at all possible with most wheelchairs though.

Once you’ve needed a low-floor service the inadequacy of current arrangements becomes stark. I can’t imagine it’s worth life-extending the B-class trams (per The Age article cited at the top) – Sydney just decided to buy new rather than try and overhaul their oldest trams. Maybe they could be kept on as peak filler services such that there’s no more than 10 mins between low-floor services, with a higher frequency filled in by the high-floors.

The apparent success of the raised-road stops (Bridge Rd, Macarthur St) would suggest the rollout could be sped up, given these don’t seem to be overly complex designs compared to centre-road platform stops, etc.

Docklands is another beauty. My mate, Phill had to motor back to Spencer St after lunch. Just the same, he probably beat the tram:
http://i.imgur.com/kEKnLoi.jpg

It seems obvious the low floor trams are being deployed with priority given to capacity improvements and the platform stop rollout hasn’t been coordinated with that.

@Dave, re:wheelchairs on non-accessible trams/stops, a few days ago I saw a group of people attempt to carry a wheelchair (with someone in it) up an A class on Route 48 at a roadside stop. They eventually changed their mind, and decided to wait for the low-floor C class 10 minutes later, which I assume they carried the wheelchair onto.

Problem is some routes have zero low floor trams- 70, 75, 57, almost certainly others. So effectively parts of Melbourne don’t exist if you need accessible, in the same way I tend to avoid businesses that are far from tram/trains (or frequent bus) in general.
Sure, you can do it with a friend with car, or a taxi, but $$, more effort, not always reliable etc.

I imagine it would be very difficult to install platform stops on Royal Parade (for route 19). They would totally disfigure the triple-carriageway avenue style of the road. I think the only hope would be to build raised-road type stops a la Bridge Road.

At the moment the stops on route 19 outside the hospital are just regular tram stops like you get out in the suburbs. Not even a safety zone in the middle of the road! They outgrew their current format a long time ago.

In recent week they’re done some power upgrades for the 55 line in anticipation for a new type of tram, i assume it will be the accessible tram. Whether they will also upgrade stops beyond royal park i’m not sure.

Is the Royal Pde cross section much different to Flemengton or St Kilda Rd? Both of them manage platform stops

The best way to fix this problem is to have a short shuttle service between Elizabeth street and the RCH. or on to Royal Park R/S via RCH.

In other words, a short version of the old #68, except operated full time. This route could be operated by Moreland, and they use spare D2s on this route.

As for the new #58 (combined #55 and #8) There is only enough D1s to operate 70% of services on all routes operated by that depot. Unless they plan on having all their D1 operate only on the #55, the very few D1s on that route would not be enough to provide much of a service as thus.

@gobillino Yes. There is only one standard lane each way in the centre carriageway plus trams. The only ways to put platform stops on that road while retaining the current structure would be raised road stops as on Bridge Rd, or to exclude cars from the centre carriageway. Presumably VicRoads would veto the latter, and I think the community would veto a road redesign so I expect a raised road treatment sooner or later.

I think you said somewhere a no brainer – why do the CEO’s come out without experience and limited knowledge?! Perhaps before they go designing such they should get in a wheelchair & try and get about town!!

[…] Just like in the hospital precinct, both tram services lack accessibility, important for those with mobility aids/wheelchairs, but also prams. […]