The RACV has again cited choice as a reason to go ahead and build huge road projects, including the East West Link which the Andrews government has a clear mandate to scrap.

Ah yes, choice. Let me give you an example of transport choice.

My friend Gary had a choice. For years he endured the 232 bus across the Westgate Bridge to work in Port Melbourne. Every time I’d see him he’d have a tale of the latest delays, missing buses, and service diverted.

The service kept declining, so eventually he gave up. After hearing his tales of woe, I couldn’t blame him. He’d given it a good go.

So now he drives. Now he’s stuck in the Westgate traffic with all the other drivers. 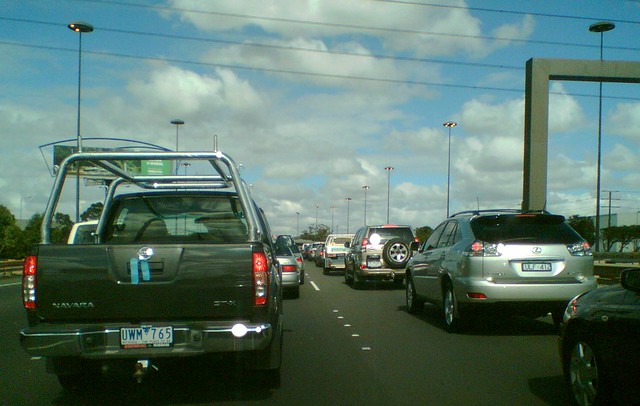 As a parting shot, the bus service was effectively deleted – the version of the 232 that ran via Port Melbourne no longer runs. If he had to use the bus today, he’d have go of all the way into the City, then back out again.

After 70 years of motorway investment, and little into other modes of travel, the problem is that too many people drive because they have no other viable choice.

Even fewer choices if you don’t have a car.

I think there’s a combination of factors. Our urban sprawl is simply too expansive to be non-reliant on motor vehicles to a substantial degree.

I don’t drive at the moment (have been using PT for 8 years) but with work/study now requiring me to go to areas outside of the primary PT corridors, the difference is stark between areas well-served and those not so much so.

Anyone in the western suburbs (esp Middle/Outer west) would be car-reliant to some degree…mixed mode is the best bet.

232 before July changes last year, use to have massive late running. Buses could be up to 80 mins(miss whole round trip) no exaggeration
Even on Sundays buses could be an hour late! It was very rare for buses to be on time . It’s was a combination of congestion I.e Westgate, Todd Rd, Flinders St, and tight runs times/little layover on time.

The late running on this and 216/219/220 was like no other route. It happened 7 days a week, day , night you name it. Even when there was no congestion buses were late, as the run times were simply impossible .

Though the changes last year, were no good for Port Melbourne passengers. They’ve been very good for City passengers. With it skipping Port Melbourne and re-route away from Flinders St, along with revised run times and more layover time, has since massive improvement to on time running on this route.

My the following comment in above post should read “Even when there was no congestion buses were late, as the run times were simply impossible .”

“Even when there was congestion buses were late, as the run times were simply impossible .”

Hardly surprising that the RACV would be all for road improvements.

One big surprise is they did voice support for the upgrade of the Dandenong line corridor.

No, they do not have a clear mandate to scrap it. They got a mandate to govern, but a poll showed that a majority (46% to 35%) thought that the East-West Link should go ahead. In other words, a majority wanted the Labor party, but not that particular policy. That doesn’t amount to a “clear mandate”.

@John, yes, some individual surveys indicated a lack of support for scrapping it. (Remembering that all surveys that asked respondents to choose priorities said the road tunnel should come after PT-related projects).

Regardless of any surveys, Labor went into the election with a very clear policy that they would scrap it, and they still got voted in. That, as they say, that’s the only poll that counts. That’s a mandate – just as Baillieu got voted in with a mandate to put PSOs onto railway stations, for instance.

@ John
Although it is not mentioned in the article you cite, the same poll also showed that 68% of respondents agreed with the statement “The government should spend more on public transport, even if it means spending less on roads,” Seemingly introducing a contradiction to the question about support for the East West Link
http://www.abc.net.au/news/2014-11-11/vote-compass-results-show-voters-support-east-east-link/5880648

Danel: “…some individual surveys indicated a lack of support for scrapping it.”

Don’t misrepresent it. It wasn’t a “lack of support”, it was /disagreement/ with the idea of scrapping it. And you use of “some individual surveys” implies that there were others that showed support for scrapping it. Are there any? That is, are there any where that support is explicit, rather than implied (the election poll itself only implies support).

Daniel: “… all surveys that asked respondents to choose priorities said the road tunnel should come after PT-related projects” and Chris: “the same poll also showed that … The government should spend more on public transport…”
Yes, but all this means is that they want both. Perhaps unrealistic, but if you are citing what people want, that’s what they wanted.

Daniel: “Labor went into the election with a very clear policy that they would scrap it, and they still got voted in. That, as they say, that’s the only poll that counts. That’s a mandate…”

The problem is that the voters have to vote for a party as a whole; that is, they don’t get to vote on individual policies. So while it’s true that they chose Labor, and it’s probably true that Labor had that clear policy, and it’s true that that gave Labor a mandate to govern, it simply doesn’t follow that they had a “clear mandate” for that particular policy.

@John, to my mind, if a party clearly announces a policy (especially one that is in their top 5 in terms of profile/importance), and despite misgivings, people vote them in, then they’ve got a mandate. I’m not sure what additional factor you’d be looking for?

Another example: I reckon Labor has a mandate to introduce a Grand Final holiday on the day before the game. They said they’d do it. I (and many others, it seems) don’t think it’s a good idea, but I’d accept people voted them in anyway. No, we don’t get to vote for individual policies, but that’s the game.

What “I’d be looking for” is good evidence that people voting for them wanted that policy. And given the poll which shows the opposite, it seems clear that such a “clear mandate” is lacking.

What would an /ordinary/ mandate look like? As opposed to a /clear/ mandate? You clearly had in mind that it was more than just permission from the electorate to cancel the Link; by adding the adjective “clear” you were implying that it was something that people particularly wanted; that that’s one of the main reasons they voted for the Labor Party. But that is certainly not “clear”.

Interestingly, a journalist has made a similar point in the last day or so. See http://www.theaustralian.com.au/opinion/carbon-tax-east-west-link-the-facts-about-an-election-mandate/story-e6frg6zo-1227322680552. He says “When something was an element of an election platform, you can say people voted for it, but not necessarily that it was the reason they voted that way.”

@Roger – no choice at all when the pithy signalling brings down the boom gates. Or a madman shuts down the Westgate Bridge (as happened on 16 Sept 2003).

Let me tell the sad story of a Nunawading level crossing failure. I got off a down (out-bound) train at Nunawading, then discovered the boom gates stuck down. Like many people, I illegally crossed to the other side after a while. Now the problem: there’s no bus (stuck in traffic jammed by the level crossing), can’t ring up for a ride (traffic jam again). So I thought I would get a train back to Blackburn, to get a different bus home. As the up train approached Nunawading, it broke down. There were no further down trains because of a signalling problem, so not able to get to Mitcham/Heatherdale (for yet more buses home).

So I walked about 2 km out of the traffic jam then rang up for a ride. It was very humid and wet, and I was basically drenched from the inside out. I wasn’t feeling too good for the whole weekend.

Not much of a choice, for anybody.

I’ve given up public transport for the most part now that I work from home in outer Geelong. Journeys of over two hours from my door to work in the city were more than just commonplace, it was literally killing me. Going across town? Forget it.

A pure multi-mode PT trip to my current client would take at least 3 hours and half hours consisting of leaving home at 6.23 am, walking 400 m to the bus stop nearest my house to get the first bus of the day (literally – there are no earlier ones), then another 10 minute bus journey for the 1.5 km journey to my nearest station, then a 80 km V/Line journey to Footscray, a suburban train from Footscray to Flinders St (now that we don’t get any stops at North Melbourne, going across town is ultra painful), change at Flinders St for another suburban train to Oakleigh. Wait for a bus to Monash, and then walk 1.5 km from Monash to the destination on Blackburn Rd. There is no option available to me that allows a full PT only journey that arrives before 9.45 am. There is no return journey possible if I keep business hours as both bus services from my train station to Deakin stop before I could get there. If I was a bit cheeky and left say at 5, I’d be home around 9.20 pm according to PTV’s trip planner, taking into account there’s no service between Waurn Ponds Station and my closest bus stop at that time of the night. That’s a 4 hour and 20 minute return journey. If I had no car, I would have to move or get hotels as there’s no viable or realistic way to travel from where I live 95 kms from the client in a reasonable time. It actually takes less time to fly to Sydney than to get PT to Clayton from where I live, including the time taken at checkin.

Or I get in a car and drive for 2 hours each way, 1.5 hours if it’s not peak and there are no accidents. I wish I could have a viable PT alternative, but PT planners have settled for on time running where most people go and come from the city, and no more.

@Andrew, an absolutely valid choice – and one which we all make for our trips, when weighing up the options.

Without knowing precisely where your destination is, I wonder if you’ve looked at the other options at the Monash end.

The quickest connection to Monash Uni isn’t from Oakleigh, it’s from Huntingdale using the 601 shuttle (express, every 4 minutes). It gets crowded, and some buses leave people at the stop, but the high frequency means you’re never waiting for long.

Alternately, the 703 from Clayton takes you to the Bus Loop then on to Blackburn Road, running about every 15 minutes. (Or you could pick this up at the Bus Loop after changing from the 601, to save you the walk. It’s got realtime info there, so you’d know how long the wait is.)